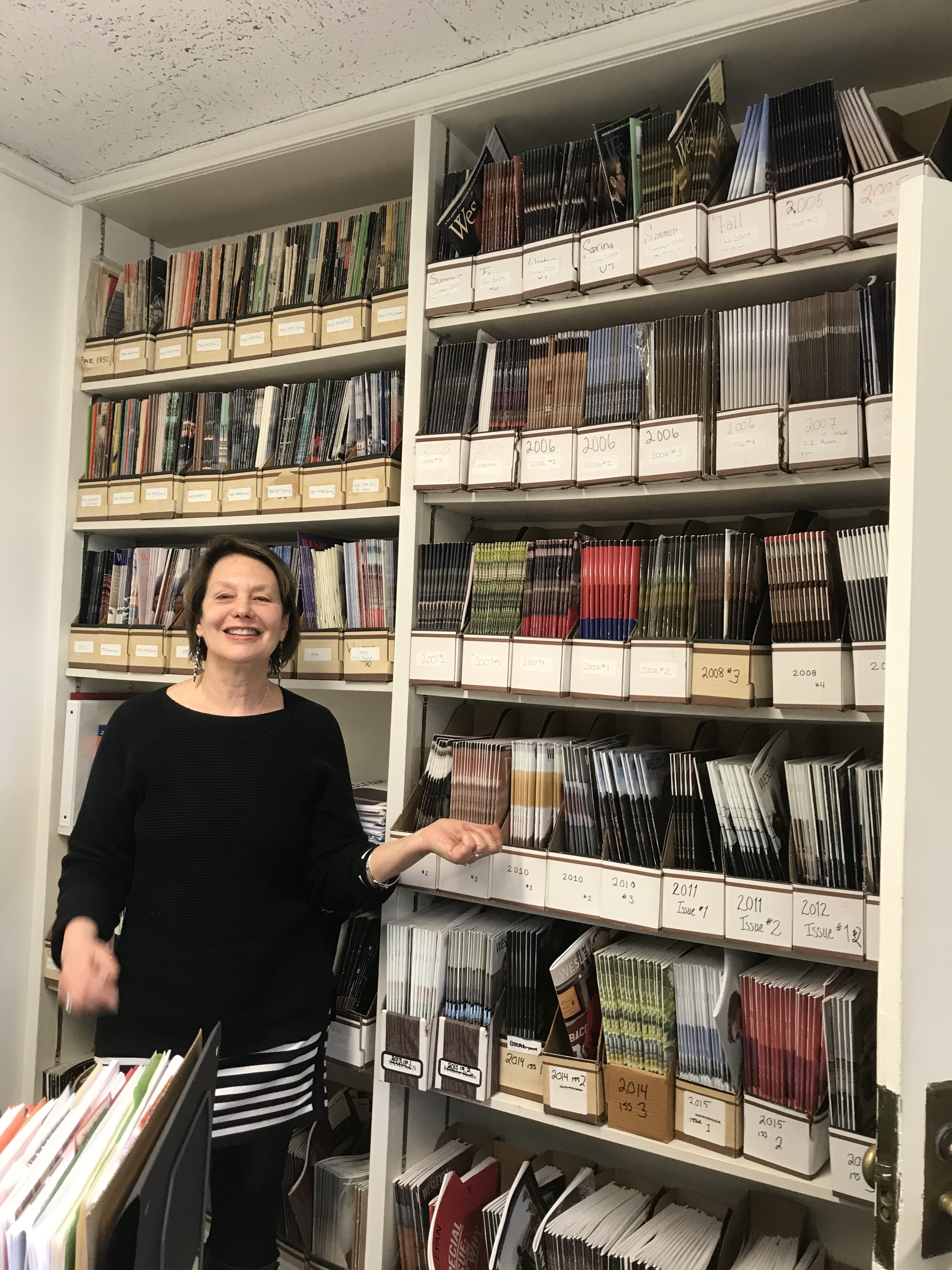 As Cynthia Rockwell approaches her last week at Wesleyan, she steps down as one of the powerhouses of the communications department, where she has worked for nearly 30 years. Throughout the decades, she’s held many roles and today serves as the managing editor of the Wesleyan alumni magazine, “Wesleyan the Magazine,” organizing letters, features, profiles, and other information that reach over 30,000 alumni.

Rockwell moved to Connecticut in 1979 from the Boston area to teach high school English at Haddam-Killingworth School in Haddam, Conn., a mere 10-minute drive from Wesleyan. Realizing she needed to make more than a teacher’s salary to support herself, she took an additional job waitressing at Middletown’s beloved La Boca restaurant. After her first child was born, she began staying at home to take care of her kids. But it wasn’t too long until she found herself in need of another job.

By chance, she ran into Wesleyan’s Head of Public Information, the department that handled Wesleyan communications at the time.

“I said [to him], ‘Oh, I proofread! I could proofread,’” Rockwell said. “So he passed my name around, and I started to do some freelanc[ing] and proofreading.”

“I was assistant and then associate editor,” Rockwell explained. “And then when longtime editor Bill Holder [’75] retired at the end of June 2018, I served as acting editor until January 2019, when I became managing editor.”

Rockwell’s daily responsibilities vary, but there are some consistencies to the job.

“I’ll respond to emails, and I’ll look at media hits too so we can see what alumni are doing out in the world,” Rockwell said. “I’ll write, go to meetings, talk to people. Reach out.”

Part of Rockwell’s job is to help assemble the Class Notes. Class Notes, as Rockwell explained, is a section of the newsletter where alumni news, accomplishments, and various life announcements—such as the birth of a baby or a wedding—are relayed.

“Each [class] has a class secretary,” Rockwell explained. “And the class secretary reaches out to their class, and then they pull notes together about what everybody’s doing.”

Rockwell mentioned that she actually met her current husband through her work with Class Notes.

“My husband is a class secretary,” Rockwell explained. “I called him up four times a year for seven years to tell him his class notes were late—would he please send them in?”

Although Rockwell is not an alumni of Wesleyan—her alma mater is fellow NESCAC Tufts University—she remarks that she has more of an affinity for Wesleyan.

“I have so much more loyalty to Wesleyan now,” Rockwell explained. “I’ve been here thirty years. I have a husband. I have a son who is a Wes alum. And I know everybody here. I don’t know the Tufts people.”

Rockwell’s also spoke about her attitudes towards the student body.

“They are wonderfully quirky, and they are so bright and so interesting,”  Rockwell said. “So passionate and so committed to things. So interdisciplinary. That’s my favorite thing. I just feel so fortunate. And they’re friendly. Nobody is stuck up.”

As one would expect, over 30 years, Rockwell has witnessed many changes to Wesleyan’s campus.

“When I first started, it was a really rough time at Wesleyan,” Rockwell explained. “President Chase had just gotten here, and then there was that firebombing. And it was a very unhappy time.”

Rockwell explained that activism at Wesleyan has fluctuated throughout her time. She also notes that she sees Wesleyan as becoming a more welcoming and happy place.

“I think [Wesleyan has become] more outgoing,” Rockwell said. “I think having Usdan has brought more people together.”

Although the magazine keeps her pretty busy, Rockwell said she tries to make time for other activities.

“I like to visit my sons,” Rockwell remarked. “The Wes alum is in Brooklyn, no surprise. I knit and I quilt and sew, and I just bought a guitar. I love to be outside, I love to work around the house outside with my husband.”

In terms of her upcoming retirement, Rockwell feels bittersweet.

“It’s exciting but it’s also so weird,” Rockwell remarked. “It’s more of a transition feeling than I would have expected. And it’s funny to walk up from where I park my car and go, ‘Ok. So this is the last February 21st I’ll be walking up the hill to go to work here.’ And to think about when I first did it, my Class of ’11 kid was one year old. How did this happen?”

Rockwell is grateful for Wesleyan and all the opportunities she’s had while here.

“I’d like to thank the Wesleyan community—alumni, students, faculty, and staff—for making Wesleyan such a great place to be,” Rockwell said in a follow-up email. “Everyone—whether they’re our famous folks or not—are just so interesting to talk to and learn from.”

Along with her thanks to the community, Rockwell has some advice for anyone considering involvement in communications.

“I am the luckiest woman in the world,” Rockwell remarked. “Try to get my job, after I leave.”