May 7, 2019, by Wesley Villano, Contributing Writer 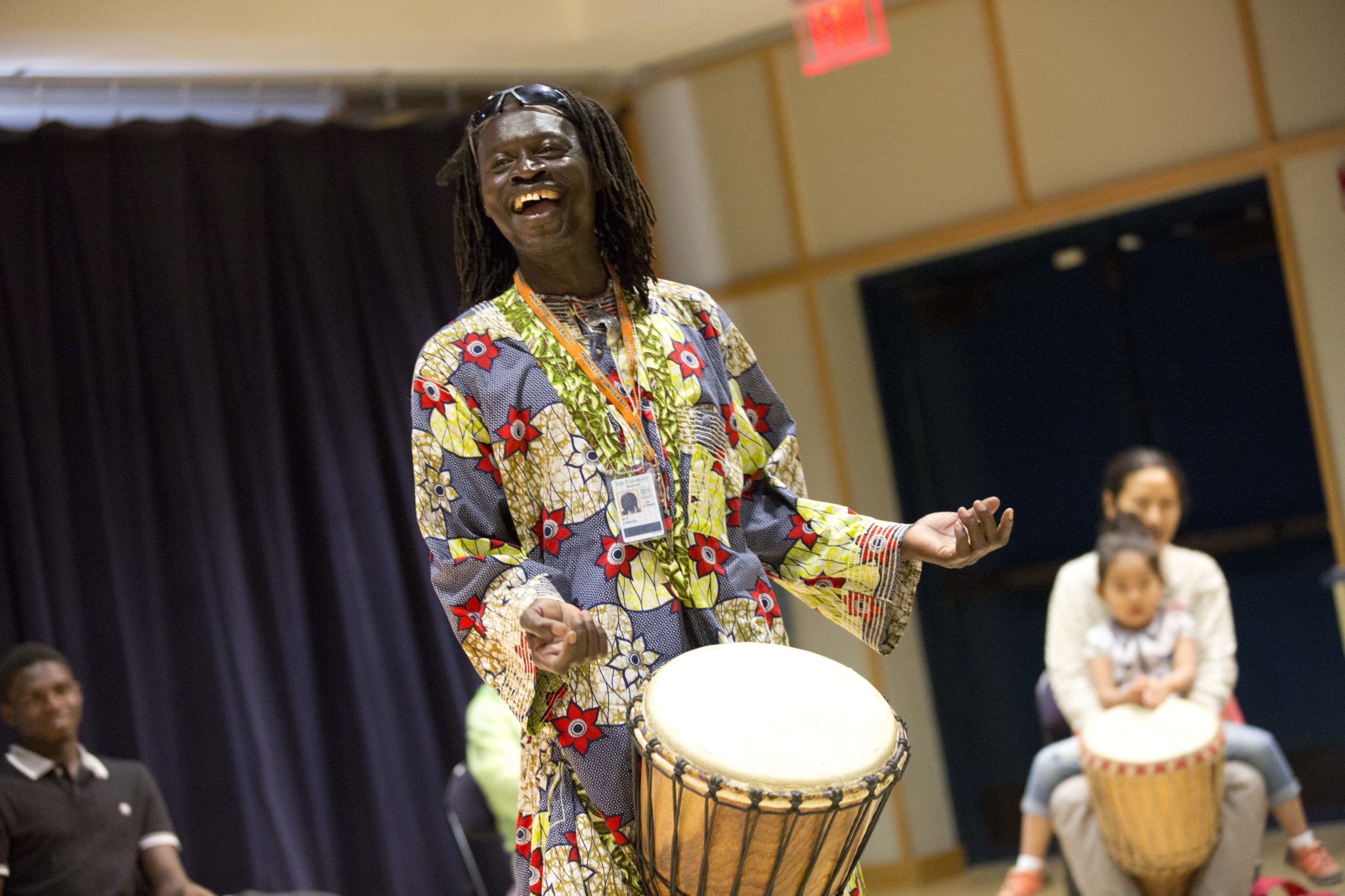 West African Dance Professor Aly Tatchol Camara’s path to Wesleyan has been different than that of most professors.

Guinea, Tatchol’s birthplace, has been a crucial element of his development as a dancer and person. As he explained, dance plays a critical social function in Guinean villages. In the 1950s, the Guinean prime minister initiated cultural programs intended to promote dance and music around the country. In every village and school in Guinea, there are not only yearly “storytelling competitions” done through song and dance, but dance is also a core component of many celebrations.

“In the village, there’s a dance when something happens, like a wedding or baby-naming ceremony,” Tatchol said. “It’s a public thing, the whole village comes, there’d be the drums, everybody knows what’s going on. When we dance…everybody has a different personality, everybody expressed themselves in a different way. People loved that. They say this person expressed themselves this way, and that person this way…. Everybody knows each other by how they dance…or sing. Some people, they don’t dance they just sing. Some people just drum.”

People in the village began to take note of Tatchol’s skill at these dances.

“I knew I had talent for dancing since I was six years old,” Tatchol said. “I’d imitate dance moves that I saw adults do, just doing whatever they’d do. And they saw I was very good with that. Very good. They figured out that I was gonna be next level—something like that. Even drumming. They said this person is gonna grow up to be this person. Way back. I can entertain people when I want to. Yeah, I was that good. Just six when I found this out.”

Although he was a born entertainer, Tatchol was a quiet child. He would go to school and help his family with farming yucca, rice, and sweet potatoes. However, he eventually began sneaking out to work with a dance company. Then, the company asked his uncle for permission to use him in a concert.

“You have the wrong kid,” Tatchol remembers his uncle responding. “I wish I had someone else to give you, but I don’t think he could do it.”

But his uncle was wrong: Tatchol was the star of the concert. The audience loved him. His family, however, had mixed reactions: his mother tried to stop the show because she thought he was going to break his neck, and his uncle felt as though he didn’t know his nephew anymore. Additionally, dancing professionally in Guinea wasn’t always seen as a respectable occupation.

But Tatchol kept following his passion. He began to perform more frequently, and in the years after his first concert, Tatchol became a celebrity in Guinea. He traveled around the country, with fans always making sure he was lodged and fed.

People often told him that he was too talented to stay in Guinea, and that he needed to go to Europe. He initially ignored them. But after a few years, Tatchol increasingly had to avoid crowded areas where he was sure to be recognized. He grew bored and left to spend a year in Senegal. Still feeling antsy, Tatchol decided to join a dance company going to a festival in Canada.

When he arrived in North America, Tatchol couldn’t believe how early the sun rose. He also remembers that it took him time to get used to seeing white people everywhere. But other than that, he says coming to North America was easy. Everywhere he went, people recognized his talents. All he had to do was perform, as he explained, and everything would fall into place.

His first day in New York City, Tatchol played drums in Central Park. A few months later, without speaking very much English, he began teaching dance classes. He reasoned that if he could count to eight, he could teach dance.

When he moved to Harlem, Tatchol remembers feeling relieved to be around black people again. He liked the style of dress in Harlem, but once he started imitating it, he explained that he would often be stopped by police. He said that he feels fine about that now, because he knows they were just doing their job, but he remembers always making sure to cause a little mischief. His talent for acting was put to good use when he would pretend not to speak English—even though he’d picked it up by this point—to make fun of the officers.

Today, Tatchol lives and teaches in New Haven with his wife and 21-year-old son, who is also his best friend. Before he leaves the University at the end of this semester, Tatchol wanted to give a final message to students. As he remembers, whenever Tatchol’s grandfather would see a hungry person, he would invite them inside, and give them whatever little he had. Tatchol has said he wants his students to bring that same loving spirit everywhere, giving them a message before his West African Dance class left for Thanksgiving.

“I love all of you so much that you should give your parents a hug from me,” Tatchol said.

Wesley Villano can be reached at wvillano@wesleyan.edu.