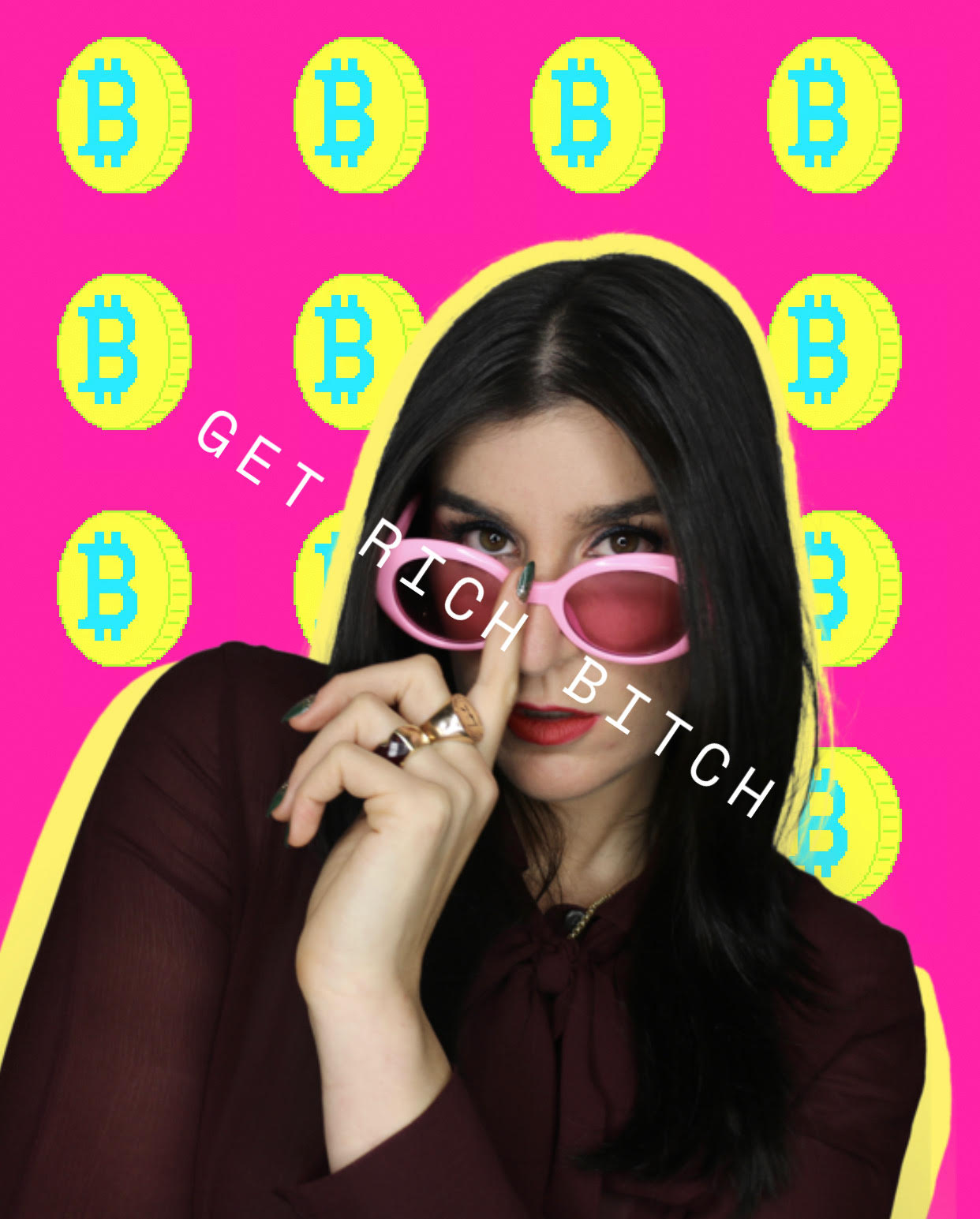 You may be familiar with Wesleyan alumni working at places like Goldman Sachs or Citibank, but there’s a new finance girl in town—and her name is Mrs. Dow Jones. With 68.1k followers on her Instagram page, @mrsdowjones, aka Haley Sacks ’13, is making a name for herself in both the media and finance worlds. Utilizing popular culture references and memes, Sacks breaks down financial concepts to make them accessible for everyone—and, of course, to make them cool. We recently caught up with this WesCeleb over the phone to hear more about her time at Wesleyan, her famous screenplay, and what inspired her to create @mrsdowjones.

The Argus: Can you tell us a little bit about your time at Wesleyan?

Haley Sacks: I was a film major, and I rowed varsity crew all four years. I was also an alumni caller, and I wrote a screenplay for my thesis. I loved Wesleyan! It was such an important time for me, and I really came into my own there. I found friends who are still my best friends to this day and who I feel like really accepted me for me and helped me gain the confidence to do what I’m doing now.

A: Do you have a favorite memory from your time at Wesleyan?

HS: I can’t tell you too many crazy things because I have to save some things for my memoir. But I will say that we had some crazy times. I don’t know if I have one distinct memory that stands out, but there’s so much senior year that happened that was great. That was a really special time.

A: What did your life look like after Wesleyan and before you started @mrsdowjones?

HS: When I left Wesleyan, I had written this screenplay that really did not have the structure to be a movie, and I didn’t get honors on it—but it was funny. There were a ton of jokes in it, but it wasn’t going to be sold or anything. I for sure thought that Hollywood is gonna come calling, that I’m the next Mindy Kaling. Like, welcome to the real world, you’re about to be blessed by Haley. But it was not like that at all.

My first job was at David Letterman, where I was a page at CBS. I had always known that I wanted and needed an audience and that I had a voice and I had something to say…. While I was there, one of my best friends, Jack Coyne, had been working for this YouTuber, Casey Neistat. Jack working with Casey sort of normalized the idea of YouTube, so while I was at Letterman I started my own YouTube channel, and that taught me so much about making content, which is something that I now do every day. That was sort of the beginning, and then I worked at a Pilates studio, I was a babysitter. I was doing anything that I could, I was always very entrepreneurial and working for myself more than I would work for anyone else.

But then, around the time that I started @mrsdowjones, I got what I thought was my dream job for Lorne Michaels, at his digital production company, Above Average. When I worked for Above Average, I stopped working on @mrsdowjones. I got really unhappy, and I was really stressed all the time. It didn’t feel like me as much. It was supposed to be an 18-month program, and they ran out of funding after six months. The first week after that, I went all-in on @mrsdowjones. I was pulling all-nighters, I was making a Snapchat show. The moment that Above Average ended, it was very clear to me that working in digital media for another company wasn’t what was going to make me happy and that I needed to find my own voice and own audience in order to secure a career. I always wanted to be direct to the consumer and not be as reliant on someone else approving my work. That was in November 2017, and since then it has been pedal to the metal every day, working so hard—truly, I work all the time. Obviously I get a lot of pedicures, too, but even while I’m there, I do a lot of emails because it really never stops. Through doing it, I’ve found my voice even more, as well as my audience.

A: How did the original idea for @mrsdowjones come about?

HS: I think that most founders come at their ideas or their companies because they want to solve something that has been difficult for them. For me, I had always felt very low-confidence when it came to money and to Wall Street, and I really just had a disempowered view of it. I felt a disconnect from the world of financial news and felt very boxed out by it my whole life. My confidence and my own ability to take charge of that part of my life was low, so I just decided not to let what was available to me to learn about investing and business define my, or anyone else’s, financial journey. So, I created a platform that made it cool and accessible to understand the stock market. 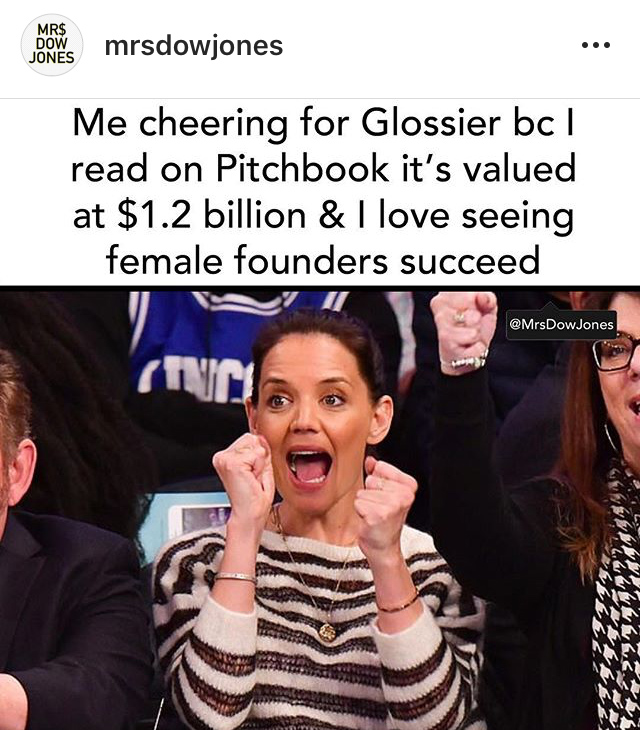 A: Did your time at Wesleyan inspire @mrsdowjones in any way?

HS: I feel like @mrsdowjones is a lot bougier than Wesleyan, but I will say that the creative voice and being able to be myself for a living really transpired because of my experience at Wesleyan. It’s a place that really nurtures creativity and individuality. I had such great support while I was there and it gave me the foundation that I needed to feel confident to do this. I was not involved at all in economics or finance when I was there, so I can’t really say that it inspires any of the actual content, but I will say that from an artist’s perspective, it really helped me find my voice, because I had a lot of great teachers and experiences there that really fortified that, and who made me feel like I did have something that was worth saying.

A: What has it been like having @mrsdowjones grow into a business with such a large following?

HS: In terms of following, I’m nowhere near where I want to be, and so it’s been awesome to watch it grow, but if it wasn’t growing, I wouldn’t be doing a good job. It should be growing. This is my career, it’s my company, it has to be. It’s been amazing to watch the shift from sort of having to convince people to want to work with you to people just really understanding what I’m doing and supporting it and wanting to work with me. It’s been really cool, and it feels very right. It’s exactly what I’m meant to be doing and was completely the path that I was supposed to take. It’s very self-realizing to see the success of it, but it more just feels like I’m coming more into my own and getting closer to what I’m supposed to be doing.

A: What’s next for @mrsdowjones?

HS: We have so many projects in the works. We’re getting into all different types of media—books, I’ll be doing more speaking tours, we’re developing shows. Putting out more content and trying to grow the audience is numero uno. I want to be creating as much content as I can, and see how far I can take it and what doors it opens up.

A: How did you come up with the idea to start speaking at different colleges (also known as Finance is Cool 101)?

HS: I really wanted to have a part of my business be that I could meet people in person and connect with them, so that’s been the most amazing part of doing this whole thing. @mrsdowjones is nothing without the community. It would just be me in my room making stuff for no one. It completely exists because of the amazing people that follow and support it. I think that the “Finance is Cool 101” was really a way of getting to meet people, and because a big part of my brand is the educational aspect, it was great to explore and expand on that in person to people.

A: Do you have any advice for Wesleyan students wanting to go into the media world?

HS: Trust your own voice and always try and work on your own projects, because media is obviously not that stable of a world. As much as you can, just fortify your own work. Wesleyan is a place full of really cool and creative individuals, and it really encourages you to think outside the box and think for yourself. That’s such an amazing quality to have in the media because it’s really about your opinion and your point of view. There’s also a really great network of Wesleyan grads who are doing really great things, so tapping into that is amazing as well.