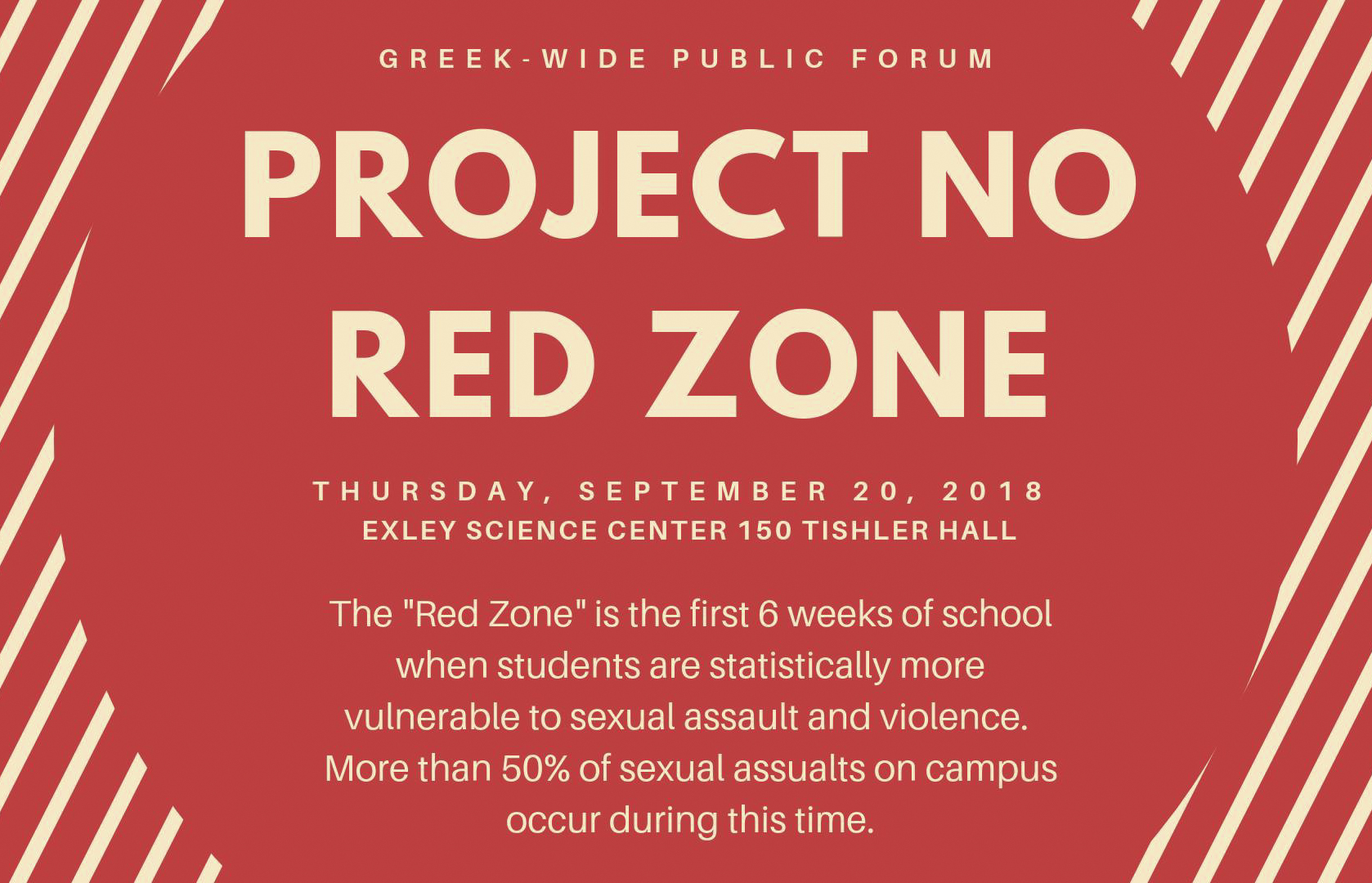 The Wesleyan Student Assembly’s (WSA) Project No Red Zone initiative led a presentation about sexual assault and bystander intervention practices on the evening of Thursday, Sept. 20. Members from Wesleyan’s Greek organizations convened in Tishler Lecture Hall in Exley to hear the talk and participate in a brief bystander intervention training.

Launched last year, Project No Red Zone (PNRZ) is a program of events organized by the WSA and other campus groups. It is aimed at reducing sexual assault in the first six weeks of school, a period marked by high rates of sexual assault and violence termed “the Red Zone.” According to Project No Red Zone’s Facebook page, more than 50 percent of sexual assaults on campus occur during this time. The project aims to educate students about consent and bystander intervention strategies while also providing resources to survivors of assault.

WSA President Emma Austin ’19, who is also the lead organizer PNRZ, spoke about deciding to make the discussion a Greek-wide event and the community’s outspoken support of the project.

“When I reached out to Greek leaders on campus all of them responded enthusiastically to collaborate with PNRZ,” Austin said. “Every Greek leader has been incredibly engaged with the project by asking what events their particular organization can do. We’ve held events with Rho Ep, Eclectic, and Psi U individually, which focus on specific issues like the Title IX process, consent, and safe partying. I can say that every Greek organization was intentional, thoughtful, and supportive of this project.”

IntraGreek Council (IGC) chairperson Rachel Kantor ’19 took the lead in organizing last week’s discussion. In planning events such as this one, Kantor hopes to provide a place for students to become educated about sexual assault prevention and then take that knowledge out into their communities.

“The goal of this forum was to make it as easy as possible for everyone to learn about the issue and fill any existing knowledge gaps,” Kantor said.

Kantor echoed Austin’s observations about the Greek community’s support of the project.

“The Greek leaders wanted to make it explicitly clear, to their members, and the Wesleyan community as a whole, that this generation does not tolerate, normalize, or condone in any way sexual assault and predatory behavior,” Kantor said.  “Making an event of this capacity mandatory serves to enforce this initiative.”

The project concluded with audience members signing a pledge. Both Austin and Kantor thought that the event was successful in its immediate goal to raise awareness of PNRZ.

“The pledge against sexual assault, completely filled with signatures, is a physical representation of this success,” Kantor said. “Over 150 Greek members, made the informed decision to sign a pledge and be part of something larger than themselves. The act of signing the pledge will hopefully stay with everyone far beyond the Red Zone in their thoughts, words, and actions.”

Austin hopes that the issues discussed during the event will transcend the classroom, insisting that it is only when people take it upon themselves to make sexual assault and consent a topic of discussion and concern in their own communities that real change can begin.

“The only way to truly witness the success of this event is if the individuals hold these conversations of consent and communication in their own lives and take what they learned back to their communities,” Austin said.

Nika Woodfill can be reached at nwoodfill@wesleyan.edu.