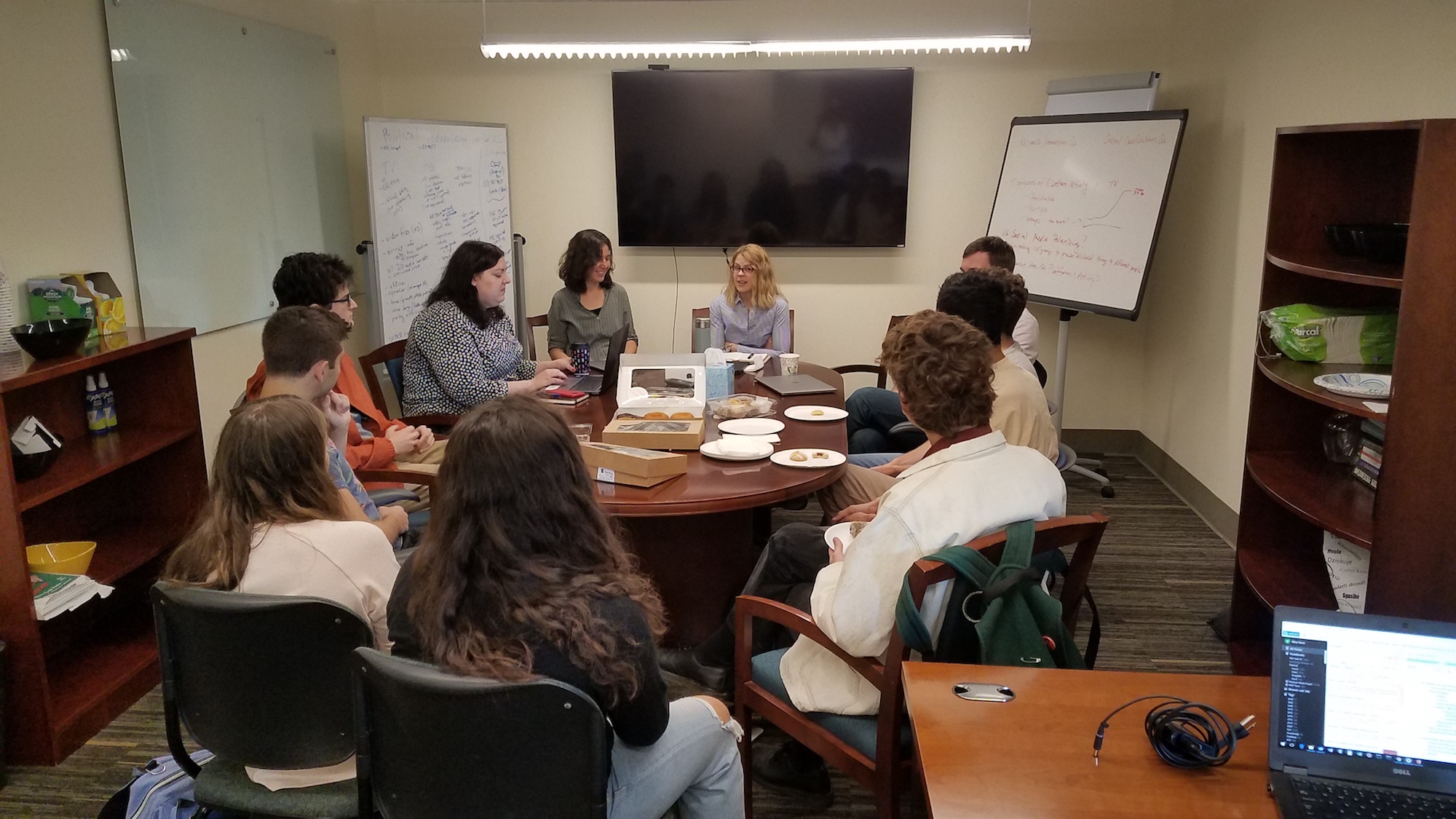 Coming up on its 10th anniversary, the Wesleyan Media Project has become a well-known and highly praised source for information on political advertisements. As an extension of the Wisconsin Advertising Project and its co-directors at Bowdoin College and Washington State University, the organization tracks political advertising in real-time, and releases the information to news media. As the only publicly available, non-profit, and non-partisan source of television advertising, they also track digital advertising on platforms such as Facebook and Google.

“Our bread and butter at the Wesleyan Media Project since 2010 has been tracking and analyzing television political advertising,” Laura Baum, Project Manager of the Wesleyan Media Project, said. “So looking at who’s doing the spending, what do those ads say. We think it’s really important for transparency and for the ability for people to hold their politicians accountable. It’s really important, what’s happening in these ads, and then what are those people doing once they’re elected.”

But since 2010, the advertising landscape has changed with the advances in digital technology.

“More recently, we’ve gotten into the tracking of ads on Facebook and Google as well,” Baum said. “As those mediums have started to have a lot more advertising, we think that it’s really important to be able to track it. It’s much, much more difficult but you can see, we’ve been putting out some summary numbers on Facebook and Google from the presidential race.”

With the help of a team of undergraduate students at Wesleyan who work as coders, the project is able to release their data quickly through press releases. The group also works on longer-term projects, such as tracking mentions of healthcare in ads for many election cycles, or coding mentions of immigration in local news clips throughout last semester.

The television advertising comes from a commercial vendor called Kantar Media/CMAG, which provides them with a database with frequencies of advertising airing in all 210 media markets across the country. Kantar Media also tells the coders what time and specific location they aired, the program on which it aired, an estimate of the cost, and then provides a video of the ad.

“Student coders here watch every single one of those creatives and answer a whole host of questions of who is the sponsor, what is the tone, what are the issues that are being referenced, are the national politicians like Pelosi or Trump featured, and if so, in what way,” Erika Franklin Fowler, co-director of the Wesleyan Media Project and Associate Professor of Government, said.

Julia Boland ’20 has been working on the project since she was a first year, nearly four years ago. She now serves as one of the Project’s student supervisors and research assistant.

“I think it’s a really great way for people to be involved in really in-depth research at the undergrad level,” Boland said. “It’s really neat to have opportunities to do that.”

Boland especially emphasized its significance to those interested in getting involved in politics.

“I think it’s cool if you’re interested in working on political campaigns,” Boland said. “You have sort of this deep knowledge of what makes a compelling campaign message, what kinds of advertising messages land with you, what kinds of things you tend to see, and you also tend to get some understanding of what things don’t work as well.”

The Wesleyan Media Project has an active website, where they consistently put out press releases with their research. One recent release analyzed the spending for broadcast television presidential ads in Iowa, which held the nation’s first caucuses on Feb. 3rd. The project’s data found that over $44 million had been spent on these advertisements, whose totals represented an 11% increase in presidential ad spending over 2016, which saw $40 million. Franklin Fowler attributed this increase to larger themes, such as spending from presidential candidates Tom Steyer and Michael Bloomberg.

“Notable findings are way more advertising on television this year than we have seen in prior cycles, just stunning amounts of ads,” Franklin Fowler said. “That’s very much due to two self-funded billionaires who are plastering airwaves, so you have Steyer and Bloomberg and they’re both taking two very different tactics. Steyer is concentrating his advertising activity in the early states, where Bloomberg is ignoring early states and blanketing everywhere else.”

“One major theme is this breakout of Steyer and Bloomberg in terms of TV ad spending,” Baum said. “That’s really interesting and surprising to us. And just in this most recent release, in talking about themes and things we’re seeing, the content of the TV ads has really been very heavy on healthcare. If you saw our press releases from 2018, we called it ‘2018: The Health Care Election’ as far as content went, that was really dominating. And we’re not surprised to see that it’s still a big focus, but it is certainly interesting”

Oftentimes, major media news outlets such as The New York Times and Politico will pick up these press releases, or even buy the data, using it for their own articles and content. These press releases are also extremely helpful for local news outlets as well, because so much of the data is focused on local communities, extending all the way to sheriffs races.

“That has been kind of the main impetus for why we do this,” Baum said. “We want to be able to communicate this information. Local journalists in particular don’t have a lot of resources and if we’re able to aggregate this information and get it to them in near real-time, we’re really able to inform their journalism.”

Sometimes, the project writes their own press. On Feb. 2, Franklin Fowler, along with project co-directors Michael M. Franz and Travis N. Ridout, published an article on The Washington Post’s “Monkey Cage” Blog about political ad spending in the Super Bowl. Using their own data, they found that both Michael Bloomberg and Donald Trump had purchased Super Bowl commercials for over $10 million apiece. In the article, they wrote that:

“Our data shows that between 2008 and 2020, all candidates, parties and outside groups combined—excluding Bloomberg and Steyer—sponsored $383.5 million in presidential ads through Jan. 26 of the election year. (These totals are not scaled to inflation.) Bloomberg and Steyer have combined to air more than $310 million since July 10, when Steyer first went on the air. That’s $310 million in six months compared with $383.5 million in 12 years.”

Franklin Fowler also highlighted that the fact that political candidates haven’t traditionally aired national ads during the Super Bowl because of the high price tag attached. Boland has seen this effect in her recent research, noting that political advertising on television is still crucial in campaigning, despite recent increases in digital advertising.

“A big takeaway we’re seeing is that televised political ads still reach a lot of people,” Boland said. “They’re harder to skip through, so that’s another thing we talk about a lot…. If you’re watching TV, and it’s a commercial break, and Michael Bloomberg’s ad is running during the Super Bowl, everyone has to kind of watch that until it’s done.”

In part, the project’s ability to track digital ads has become more advanced with the recent addition of The Delta Lab, a collaboration between the Wesleyan Media Project, Assistant Professor Saray Shai of the Computer Science Department, and Director Emmanuel Kaparakis and Associate Director Pavel Oleinikov of the Quantitative Analysis Center (QAC). In this lab, students help to execute data wrangling, computational coding, modeling, network analysis, and data visualization with the goal of building an infrastructure to make the Project’s data more accessible.

“One of the things that I’m really proud of and excited about which you’ll see on a bunch of our press releases from this past fall and the one yesterday, we do have interactive graph produced by one of our students Kevin McMorrow [’20],” Baum said. “He is part of Delta Lab, and he has taken summary data from all of the different ways that candidates are spending money. We’ve got things like national TV, satellite TV, radio, Facebook, Google, all of that. Kevin has done a nice interactive graph that we are able to update with each press release, so that’s one thing that’s really cool.”

Besides the addition of The Delta Lab, the project has some other exciting ventures in the works.

“We’ve got students who are digging in deep on the digital side,” Franklin Fowler said. “We are releasing some tools to help journalists and others who are interested, sort of parse and understand the digital advertising landscape, so we’re super excited about that.”

All of this combined, The Wesleyan Media Project is showing no signs of slowing down, especially as we look ahead to the upcoming 2020 presidential elections.

“One thing I can just say is that we are, along with the rest of the country, looking forward to the next month of developments, in particularly on the Democratic side, which is highly contested,” Baum said. “We’ve got Super Tuesday on the third of March, and so we’re looking forward to putting out another press release probably that week before, looking at where do things stand with Super Tuesday right around the corner.”

Franklin Fowler is looking forward to the directions the Wesleyan Media Project is going in.

“We’re tremendously excited,” Franklin Fowler echoed. “We feel like it’s wonderful to have so many students involved in this project in lots of different ways, and we’re just excited about the possibilities for this cycle.”