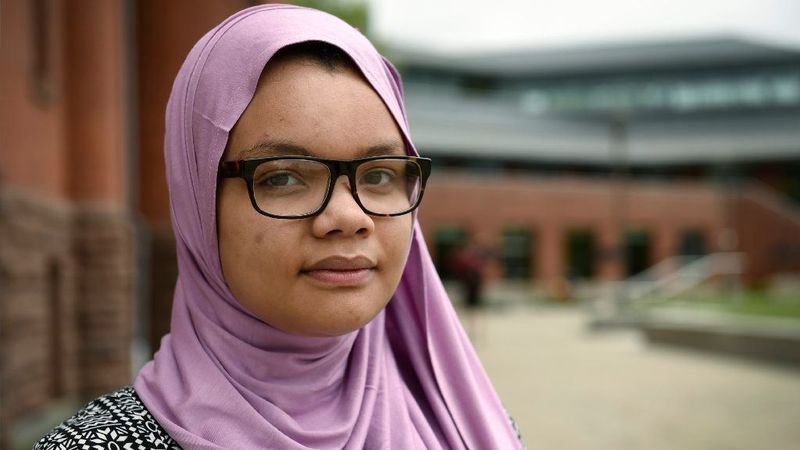 Connecticut native Alicia Strong ’18 has been pretty busy since leaving Wesleyan last May. Graduating with plans to enter a master’s program in Eastern European Studies at Yale University in the fall of 2019, she’s spent her time since graduation working as the Executive Director of the Connecticut chapter of the Council on American-Islamic Relations (CAIR-CT) and as a field organizer for Jahana Hayes’ successful congressional campaign. Just recently, Alicia was chosen to speak at the Connecticut Women’s March in Hartford on Jan. 19. The Argus caught up with Alicia to hear about her work, the speech she delivered at the Women’s March, and her fondness for her hometown of New Britain.

The Argus: You’ve only been out of Wesleyan for eight months, but you’ve stayed busy. Can you tell us about what you’ve been up to?

Alicia Strong: So, I’ve done a few things. Right before I graduated, I took a job as the Executive Director of CAIR-CT, which is the Council on American-Islamic Relations. It’s mostly a civil rights group that helps combat civil rights violations in Connecticut. So that was a really big responsibility, and it was a huge job. I really enjoyed it, but I did end up stepping down from that in the fall because I think the vision that I had for the organization and the vision my board had were really different, and I figured I had a bunch of time left in my gap year so I could do other things.

I got hired by now-Congresswoman Jahana Hayes to work on her campaign. So, from October until election day I was a field organizer and was helping run operations for her campaign out of New Britain. And then she won, which was really exciting. I then took a hiatus, went on a vacation, and now that I’m back, I’m just trying to explore different things. I’m looking to work on education equity in New Britain and am traveling to figure out what projects I want to work on next.

A: So, what did your role at CAIR entail? How did your vision differ from the vision of your board?

AS: I’m really big on building political power for marginalized communities, and so I put a lot of effort into voter registration and education and talking with politicians about policies that impact the Muslim community in Connecticut. I think the board was leaning more towards media and combatting perceptions of Muslims and pushing for more positive images of Muslims in the media, which I agree is important, but we just had different priorities.

And similarly in the education system, I got a lot of calls from parents saying that they have teachers, students, or principals who were harassing their children. In those cases, we would also secure a lawyer to work on the case, and I would also help facilitate meetings between the school, boards of education, and the parents. In the case that there was an expulsion or suspension hearing, I would go with the parent to that.

A: How did your work with CAIR and on Jahana Hayes’ campaign coincide with things you became interested in at Wesleyan or before coming to campus?

AS: I think what I’m most interested in is helping marginalized people build power. So, at CAIR, I was helping Muslims fight back against discriminatory policies that were continuing to marginalize Muslim communities. And then similarly, when I was working for Jahana Hayes, a lot of what I was doing was outreach in the New Britain community, which is a community that is low-income and has a large immigrant population. What I was trying to do was bring New Britain’s minority populations into the political fold through her campaign. For example, I would go into all the housing projects in New Britain, which are areas where campaigns rarely go, and I would talk to people about whether they were voting and what issues mattered to them. That was really amazing, seeing people whom society typically doesn’t listen to, and it was really awesome to bring them into the political process.

A: How has it been being back in your hometown?

AS: It’s been great. I knew for a long time that even though I was able to get out of New Britain and get a really great education, that I wanted to come back to my hometown, and I wanted to find ways to give back, especially to the youth in this town. In New Britain, we have a variety of problems. We have really underfunded schools, for as long as I can remember we’ve had school-to-prison pipeline issues, and we have a lot of poverty here. So for me, having the opportunity to go to an elite school was great, but I needed to figure out how to convert what I learned to bring other people up with me.

A: Do you see yourself leaving New Britain? Or would you stay there after getting your master’s?

AS: That’s a good question. I think I will leave New Britain. I’m starting my master’s at Yale in the fall, so that’s quite a drive. My husband and I are thinking about whether or not we want to move. But I do see myself moving out of New Britain just to experience different places and meet new people. I think at the end of the day, even if it’s 20 years later, I’ll probably end up back here somehow.

A: You spoke at the Connecticut Women’s March in Hartford a few weeks ago. What was that like?

AS: That was a really exciting opportunity. I talked a lot about progress and what progress means in our community and communities across the nation. When I was speaking, I wanted to remind people that we’ve come far, but we still have a long way to go. One of the really passionate moments I had when I was speaking was when I mentioned my grandmother, who on the one hand, was born at a time when she had to use colored-only bathrooms and colored-only water fountains, but she also was alive to see the election of the first Black president. And so I used that to exemplify the growth of our country, but I also used that as a jumping-off point to say, ‘Ok, but we still have mass incarceration, and we still have all of these issues that are marginalizing people in this country.’ So we can be proud of the progress, but we can also acknowledge the shameful past of America. At its core, if we want to make America truly great, we have to continue to struggle towards progress. 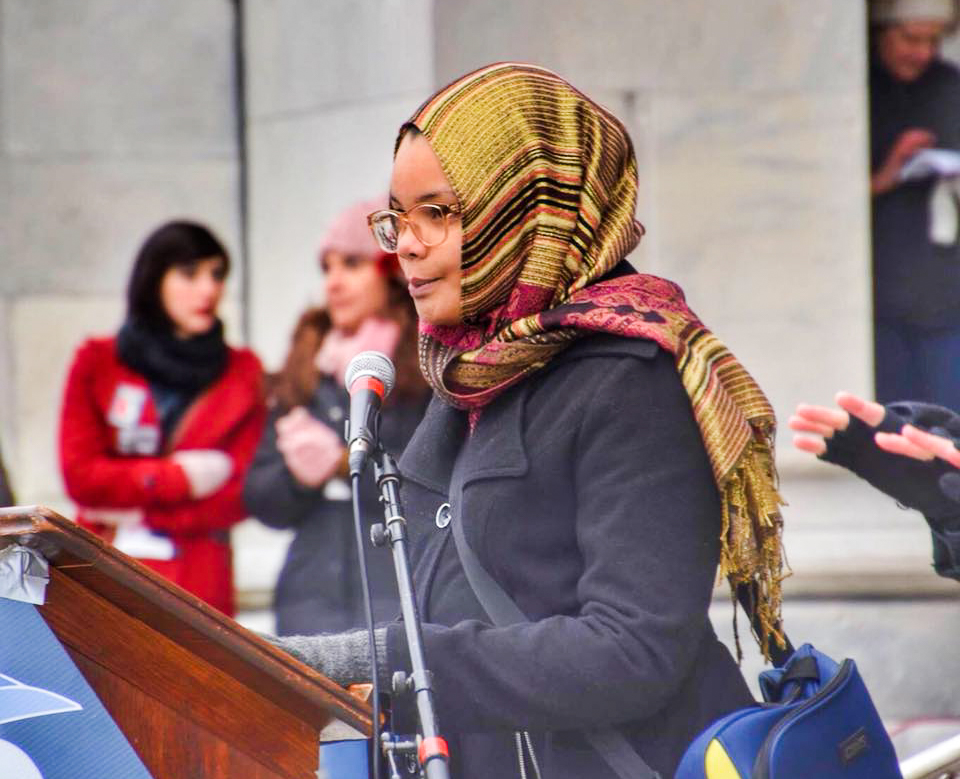 A: What do you think are the most pressing issues—and the largest opportunities for progress—in the communities you’re a part of and lead?

AS: I think one big problem is wealth inequality, which is just rampant across Connecticut. People think of Connecticut as a pretty rich area, but there’s actually a sizeable amount of income inequality. I would say another problem is mass incarceration, but then, on the flip side, Connecticut is making incredible strides to combat mass incarceration, give formerly incarcerated people another chance, and move away from imprisoning people. I think that’s a negative that’s beginning to turn into a positive.

A: Looking into the future, do you see yourself focusing on smaller-scale political action in a town like New Britain, or would you want to move to working on national or international political movements?

AS: That’s a really good question, and actually I’m not sure yet. I love working on the grassroots level because I think that’s where you build the most power, but I do want to be able to spread that to a larger population and bring that to more people, so that’s been something I’ve kind of been going back and forth with, especially since my Masters is in the International and Area Studies Department at Yale. So, I want to think about both global causes and local causes that are important to me and figure out how I can bring them together to help different people. I actually just read Angela Davis’ book, “Freedom is a Constant Struggle,” where she talks about mass incarceration and police brutality as well as the Israel-Palestine issue and Palestinian rights and how she struggles to connect the two issues. That’s given me some food for thought as a I think through these issues myself.

A: How do you hope your work at Yale will inform your activism in the future?

AS: When I was at Wesleyan and applied to Yale, I was looking to become an academic and work on my focus of Albanian Muslims in Kosovo, but then, as of late, especially since I’ve started my gap year, I’ve been thinking about all the social justice work that I’ve been doing. When I went to visit Kosovo this past winter, I went to see a lot of friends and a lot of them were talking about how they were excluded from jobs and opportunities because of their headscarf, which I just found really fascinating, especially in light of Ilhan Omar becoming the first hijabi woman to serve in Congress. Kosovars see the US as the ideal country, but somehow there are still these really terrible forms of discrimination there. And so, in thinking about what I want to do with my Masters thesis, I’m thinking of shifting it to a civil rights angle or a comparative civil rights angle to look at what’s going on in Kosovo and then look at it in different Western countries. I think that might bring my work together nicely. In the long run, I might go get a PhD and become a scholar-activist type or I might go to law school and focus more on civil rights.

A: Do you have any advice for Wesleyan students or college students in general who are looking to go into similar work that you’re doing?

AS: One of the things I would suggest, especially for Wesleyan students, is to recognize that at Wesleyan, there’s so much going on and so many activist groups that you can get overwhelmed. I found that sometimes I didn’t get myself involved in anything because there’s so much, but I would recommend for students to really think about what they’re passionate about, what has maybe impacted their lives the most, and then focus on that. You can still be an ally, you can still stand in solidarity with people on other issues, but you don’t have to overwhelm yourself or save the entire world. You can just be a little piece of a larger plan.