In the Midst of a Historic Season, Mike Breuler ’18 Talks Team and Trust 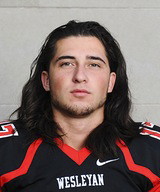 Senior football player Mike Breuler has had a historic season on the gridiron for the Cardinals this fall. Through seven games, the 6’2”, 185-pound wide receiver has put up video game-like numbers, erupting for 68 receptions, 967 receiving yards, and ten touchdowns. Breuler is unquestionably the most dominant offensive player in the NESCAC this season; he is averaging 50 more yards per game than the second-best wide receiver in the conference. Double or even triple coverage is no match for the explosive senior. The Argus sat down with Wesleyan’s star wideout as he heads into the final home game of his Wesleyan career.

The Wesleyan Argus: How much fun are you having this season?

Mike Breuler: Coming into this season the only thing I was focused on was enjoying the moment each and every day. This season has been my favorite one so far, and the amount of enjoyment both the team and I have had this season is remarkable. All the hard work and training we put in as a team and as a receiving unit feels even better when we see it pay off. This makes every moment for us enjoyable. We are living in the moment because we know that it is all over in less than two weeks.

A: Let’s go back a few years. How did you wind up playing football here at Wesleyan?

MB: Out of high school I was not sure at all where I wanted to end up, or what I wanted to study. I always commended those that had a plan or at least a head start on where they wanted to go and what they wanted to do. For me, it was the constant support and letters that I received from Wesleyan. They were all personal and I could tell they really cared for their program and me. I knew I wanted a great education, as sports do not last forever. This was a great decision for me.

MB: This season has been so special and memorable on so many accounts. My team, family, and coaches are all what motivated me to push myself and change my work ethic. I set a goal that I wanted to put on a lot of weight and come into this season bigger and stronger than any of my opponents. With the help of everyone around me, I accomplished my goals. But, it all starts with Andrew Lieberman, or “Liebs”, but to most, Coach Liebs. His determination to make me a better player all around is one of the coolest things I have seen. From the continuous conversations we had about where I needed to be for the team, to work out plans, and knocks on my door to make sure I am where I need to be, is what kept our work ethic a bit different than most. We counted on each other and held each other accountable. It is funny though, because at times when one of us deserves a little credit, we find it hard to give each other compliments because we joke about keeping each other grounded and humble. Well, Liebs, here it is, congrats my man, it is all you! Love you, bro. Thank you for putting up with me. I also just wanted to thank my teammates and family for always supporting me and counting on me. Lastly, thank you, Mark Piccirillo [’19], you really made me look good buddy.

A: I know that the football team has positional meetings almost daily. How much does the time that you spend studying film on the opposition pay dividends once you hit the field on Saturdays?

MB: We spend about an hour or two daily watching film on both our practices and our opponents where we are then tested on coverages and plays that will help prepare for game day. That time is most important for myself. Knowing that the biggest part of my game is the mental aspect and not so much the physical aspect allows me to focus in meetings and really try to be 150 percent mentally on game day.

MB: That would easily be the Tufts game. The emotions in the air that night will be remembered forever. From the way the defense played, to how well the offense executed in crunch time really showed how battle-tested we were. From Eric Meyreles [’18], making the game-securing catch to send us into overtime, to countless plays by the defense, and our quarterback Mark Piccirillo making great plays all around. After winning that game our team was so united and the brotherhood never felt so good. I really appreciate that night.

A: You guys are 5-2, so I would categorize that as a pretty successful season, but I am curious: What has been your biggest obstacle for you to overcome this season personally? And what has been the biggest hurdle for the team?

MB: Our goal every year is to go undefeated and win a championship. With that being said, once the road shifts and obstacles approach the most important thing is to stay together as a team and trust one another. It is critical to trust the coaching, trust your teammates, and trust the process because it is the key to overcome any obstacle in a team sport. I have only played team sports my entire life and this is one thing that I know for sure remains true. Every obstacle we have faced would be after a loss. You have to look everyone in the eye and figure out who still is in it. The answer should be everybody, because giving up or not competing because we are feeling sorry for ourselves is simply never an option. I want to go out on the field every day and honestly just embarrass my opponent. For me, that is my goal. I want to outplay every person that steps in front of me, and if I don’t I have to figure out what I can do to be better so that my team can be better. Because in times of adversity, you have to face it head on and talk to yourself positively, because at the end of the day the only thing you can control is your own job. For myself, it was just remaining positive at all points and never letting doubt creep in. But this was done easily because of the receiving crew around me who I spend all my time with.

A: You have one game left to wear the red and black. What will you miss most about playing football here at Wesleyan?

MB: The one thing I will miss is just playing a sport with my best friends in this University. Playing with my brothers. I won’t necessarily miss the sport as much, but rather the emotion, the time that is put into it, and playing with people I care about.