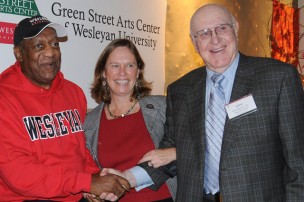 In May of 1987, William Henry Cosby, Jr. was presented with an honorary doctorate of letters by Olin Professor of English and American Studies Richard Slotkin at Wesleyan’s 155th Commencement. Cosby addressed a crowd of over seven thousand, including his daughter, Erika Cosby ’87, now Erika Ranee, who was a member of the graduating class (though the commencement booklet lists her as a student to receive a Bachelor of Arts “upon completion”). Ranee declined to comment for this article.

In November of 2014, 10 years after a lawsuit against Cosby for sexual assault was settled out of court, news outlets once again brought attention to the numerous allegations of Cosby’s sexual misconduct, due in large part to his victims stepping up to name themselves and name the crime. As of now, at least 34 women have publicly accused Cosby—now 77 years old—of drugging and/or sexually assaulting them. A few have joined a lawsuit against him, and The Los Angeles Police Department has opened up an investigation into one of the claims.
Even as Cosby continues to deny the accusations, despite their ubiquity and repeated interruptions from “hecklers” at his comedy shows, the attention has already made an impact—including leading several institutions to cut ties with him. Numerous performance venues have canceled their legs of Cosby’s comedy tour, and in November 2014, Cosby agreed to resign as honorary co-chair of UMass Amherst’s capital campaign and his name was suspended from the honorary board of High Point University in North Carolina.

“We respect Dr. Cosby’s professional achievements, appreciate his support of education, and are grateful for his involvement at HPU,” Director of Media Relations Pam Haynes wrote in an email to The Argus. “We are temporarily and respectfully suspending his name on the advisory board until all information is available.”

In December 2014, Cosby resigned from the board of his alma mater, Temple University; in the same month, the U.S. Navy revoked Cosby’s honorary title of Chief Petty Officer and Spelman College—to which Cosby had donated $20 million—dropped its William and Camille Olivia Hanks Cosby Endowed Professorship position.

To many students, then, it comes as a surprise that Cosby has yet to be stripped of any of his over 17 honorary degrees, despite the seriousness of these allegations. In addition to his Wesleyan degree, Cosby currently holds honorary degrees from schools including Yale University, Swarthmore College, University of Pennsylvania, Colgate University, and Boston University, the last of which was presented to Cosby in May 2014.

Many schools, including Wesleyan, have not rescinded Cosby’s degree because they hold general policies against the revocation of honorary degrees.

“We don’t rescind the degrees,” said President Michael Roth in an interview with The Argus. “We don’t go backwards.”

Roth expressed his ambivalence about upholding the policy, but says the administration does not intend to change it. Instead, Roth plans to monitor honorary degree candidates more carefully.

The University’s decision to maintain its policy against the revocation of honorary degrees has been echoed by other universities from which Cosby holds them. Fordham University, for example, has not rescinded the honorary doctorate of humane letters that it awarded Cosby in 2001.

“To the best of my knowledge, Fordham has never rescinded an honorary degree,” wrote Senior Director of Communications Robert Howe in an email to The Argus.

Though Cosby’s honorary degree has not received much attention at Fordham, another honorary degree has been a source of contention there. John Brennan, Director of the Central Intelligence Agency and former Deputy National Security Advisor for Homeland Security and Counterterrorism, continues to hold his honorary degree, which he was awarded in 2012 when he was the commencement speaker. To some at Fordham, Brennan’s award sent the wrong message.

“Fordham University is implicitly endorsing the ‘War on Terror,’ the use of rendition, the CIA’s heinous drone campaign, and the subversion of the rule of law in America, including the assassination of its own citizens,” read a Change.org petition started by two then-students after the announcement of Brennan’s selection.

The initial petition failed, but in 2014 a group of Fordham faculty members assembled to revisit the controversy, moved to action by a new report on torture by the Senate Select Committee on Intelligence. The group Fordham Faculty Against Torture (FFAT) drafted a petition urging the University to revoke Brennan’s honorary degree. Glenn Hendler, Associate Professor of English and Chair of the English Department at Fordham, played a pivotal role in founding FFAT and believes that Brennan’s views are in direct discord with the values of Fordham.

“[It’s] the idea that a Catholic university would honor someone who is pro-torture,” Hendler said. “There’s been lots of student discussion of it and a lot of faculty events. Very few people are pro-torture, shall we say.”

Hendler expressed interest in urging the Fordham administration to revoke Cosby’s honorary degree if FFAT were to succeed in the revocation of Brennan’s degree.

In March, however, the Fordham United Student Government (USG) voted against supporting FFAT, expressing concern that it would set a precedent for the revocation of honorary degrees.

“Certain members felt that the revocation of John Brennan’s Honorary Degree would set a murky precedent,” said Nevin Kulangara, executive president of the USG and a member of the Fordham class of 2015. “Some raised the concern that revoking a degree from one individual would require the University to apply the same level of scrutiny to other recipients of an Honorary Doctorate.”

While the revocation of Cosby’s honorary degree from Wesleyan may very well set expectations for the University’s scrutiny in selecting honorary degree candidates, the University’s decision raises the question of whether that would have negative consequences. The case of the University upholding Cosby’s degree is particularly relevant in light of the current Title IX allegations on campus. According to Tess Altman ’17, an active member of the Wesleyan Feminist Art and Thought Collective, Roth’s decision not to revoke Cosby’s degree mirrors his attitude toward issues of sexual assault on campus.

“I think the Wesleyan administration only takes action to cover their own ass, because no one’s gone after them,” Altman said. “It just speaks to the way they deal with things. Moral questions are never a norm or something that are constantly looked at. It feels like a lot of times the moral questions are only broached when shit happens, and then you have to. I don’t think I think that about the entire Wesleyan administration. I do think that’s kind of the way Roth operates, and I think it speaks to Roth’s liberal, hands-off thing. He’s just not going to do anything until he has to do something.”