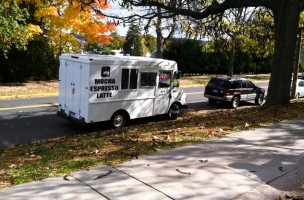 If you’ve cringed at the mere thought of the line at Pi Café on Monday morning or sacrificed your perfect attendance record in the name of your pre-class latte, the Mon Cheri coffee truck could be your new best friend. Cheryl Hawkins, the owner, brought her business to the Wesleyan campus about two weeks ago with students’ busy schedules in mind. The truck, parked on High Street on weekdays between 8:15 a.m. and 3 p.m., offers a wide variety of coffee beverages and snacks for students and faculty members on the go.

The menu, which includes flavored lattes, breakfast sandwiches, and yogurt parfaits, is budget-friendly, too. A small coffee will run you a dollar, a slice of pie two, and a pumpkin spice latte about three.

Hawkins, who lives in Meriden, bought her truck a year ago and tried parking it in various locations in the area. She got the idea to park at Wesleyan during a stint as a Middletown school bus driver. She noticed students going to class in buildings on High Street and thought there might be a demand for coffee on the east side of campus.

“I would see the students down here and know that there’s a coffee shop up [at Usdan],” she said. “But what do they do down [on High Street]? They’ve got to run to classes.”

Soon after, Hawkins applied for a health inspection (on which she got 100 percent, she proudly revealed) and received a parking permit. At first, she parked her truck toward the south end of High Street, but she soon realized that moving farther up would bring her closer to the center of campus.

Hawkins may be new to the food truck world, but she is by no means a rookie in the food service industry. In the ’80s, she owned a luncheonette with her boyfriend at the time. Not long after buying it, Hawkins left the business and took a hiatus from the food industry. But she attributes her longtime interest in food and her desire to start her own business to the experience.

After selling the luncheonette, Hawkins began working for the State of Connecticut Department of Correction as a corrections officer and drug and alcohol counselor. When her father became ill, she retired early, overcome with stress. Soon after, she started a job at the Rushford Center in Middletown, a substance abuse treatment facility, as a drug and alcohol counselor for at-risk teenagers. She incorporated her passion for food into her work with the residents by leading cooking-related activities.

In 2003, Hawkins married her current husband, whom she met online, and moved to Seattle to live with him. She was captivated by the city’s thriving coffee culture, particularly the parking lot stands, drive-thrus, and trucks serving specialty drinks. It was then that Hawkins first recognized her desire to begin her own coffee business.

In order to learn the tricks of the trade, Hawkins spent time at her favorite coffee drive-thru in Seattle, observing the employers as they prepared beverages. Five months later, Hawkins and her husband moved to Connecticut, which they felt better suited their lifestyle. In addition to starting two jobs at group homes caring for developmentally disabled adults, Hawkins got some hands-on experience in the coffee world when she began a job at Essex Coffee and Tea, an independently owned shop in Essex, Conn. While there, Hawkins was trained to make specialty coffee beverages. The practice she received by preparing drinks for customers, though, was what allowed her to master the art.

While working at Essex Coffee and Tea, Hawkins began catering events at her church and for her friends, who, impressed with her culinary skill, encouraged her to start her own coffee business. She looked into purchasing a space for her own coffee shop, but high costs dissuaded her. Hawkins and her husband decided that it would be more practical for her to run her business out of a food truck.

“I was going to have a brick-and-mortar coffee shop, but that was going to cost hundreds of thousands of dollars,” she said. “This just seemed like it made the most sense.”

After Hawkins purchased the truck, her husband built the interior, which features a small kitchen and storage space for her supplies. Her husband continues to support her business by lending a hand at larger events. Last Saturday, for example, he helped her set up shop before the homecoming game.

Hawkins’ husband also had to bring the truck back to their home on Saturday morning when it seemed as though the generator wasn’t working properly. The problem ultimately turned out to be very minor and easily fixable, but solving it delayed the start of her business day by a couple of hours. For Hawkins, the incident highlighted the inherent unpredictability of running a business out of a vehicle.

“Those are some of the woes of having a food truck,” she said. “It is well known amongst the food truck community all over the country that one thing that can go wrong is having something not start. If your truck doesn’t start, then you don’t have business that day.”

As a newcomer to the food truck world, Hawkins is constantly learning about the industry and adjusting her business accordingly. For one thing, her menu has changed since she arrived at Wesleyan. She used to offer lunch foods like soups and wraps, thinking there would be a demand for quick meals among college students, but they didn’t sell well. Now, she focuses on providing customers with top-quality pastries like cookies and biscotti from local bakeries, which is more in line with her initial plan for her business.

“I’ve done a lot of different things and made mistakes throwing things out,” she said. “I think my vision has always been to be a coffee, fine tea, sweet truck. For me, if you’re going to do something, do it well. Don’t try to be a jack-of-all-trades. I was just trying to accommodate what I thought everybody would want, and it’s not beneficial.”

Still, customers should look out for exciting additions to the menu. Later this month, Hawkins will begin serving gingerbread lattes, a favorite of hers, and gingerbread biscotti. In the winter, she will offer peppermint mochas and eggnog lattes in addition to pumpkin spice lattes, her bestselling product.

Hawkins’ menu may be constantly changing, but her principles have remained the same since she began. The Mon Cheri owner has done careful research about unfair practices in the coffee industry in Latin America and African regions, and she has attended numerous classes on the subject at trade shows. She is adamant about purchasing fair trade coffee and tea from brewers and blenders she trusts.

“If you’re just buying coffee from anybody, and you don’t look into how they do things, then you can be participating in unfair practices and not even know it,” she said. “And to some people, that doesn’t matter; it’s all about the profit. Well, of course anybody that’s in business wants to make a profit. I’m not so altruistic that I’m going to do it for free. But I’m not going to choose somebody that I haven’t at least done some research on.”

Hawkins also works hard to treat her customers fairly by providing them with quality items at reasonable prices. She is aware that even if she raised her prices, they would be lower than those at Pi Café and Usdan, but Hawkins sees herself as more humanitarian than business-minded.

“I looked at my products, I know what it costs me, and I’m pricing it accordingly to make a profit and to make it fair for you guys,” she said. “I can get more, but why should I? Just because I can? Of course I want to make money, but that’s not only why I’m here.”