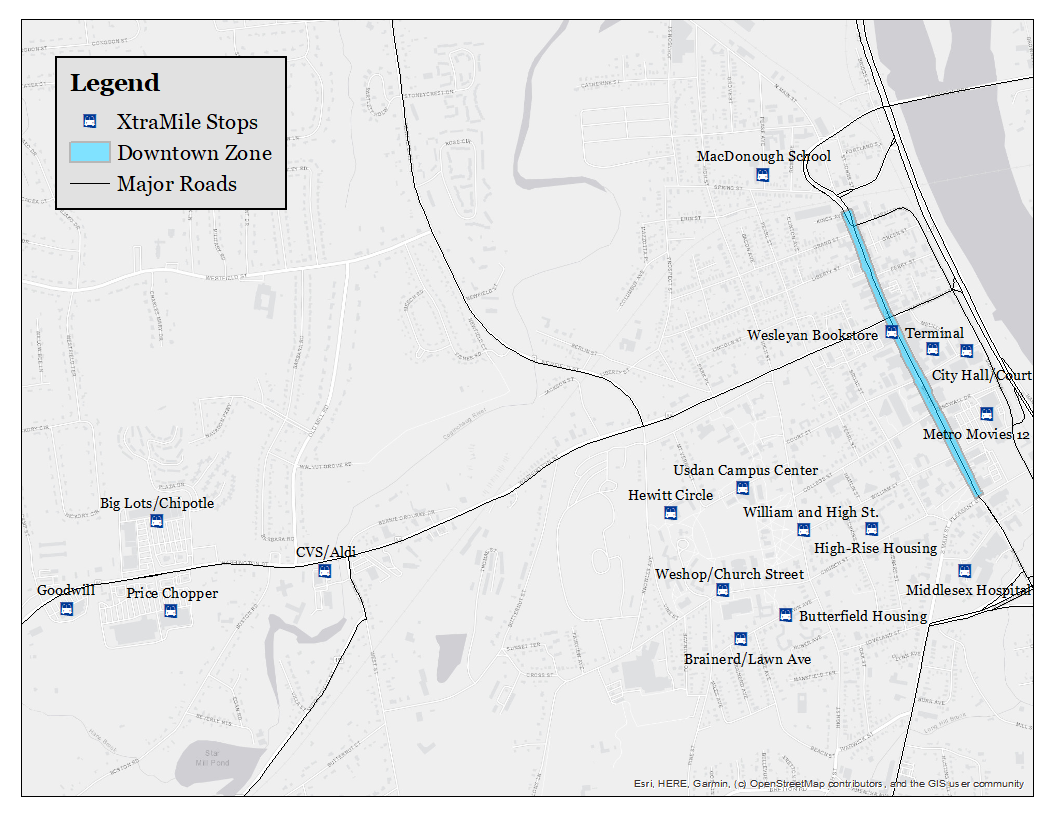 The XtraMile pilot program, an on-demand ride-sharing service, launched on Wednesday, Aug. 31 in Middletown. It offers Wesleyan students and Middletown residents free rides through the end of the fall semester, running shuttle buses from 12 p.m. to 8 p.m. Monday through Wednesday, and from 12 p.m. to 10 p.m. Thursday through Saturday, with no service on Sundays.

Riders can download the TransLoc app to request shuttle rides to any of the 17 stops within central Middletown, including various stops around campus, on Main Street, and to stores including Price Chopper, CVS, and Goodwill. The program currently has one driver operating, with a typical wait time of five to 15 minutes, though Transportation Planner at Middletown Area Transit (MAT) and Estuary Transit District, Brendan Geraghty said the program could add additional drivers as needed as ridership grows.

The idea to bring XtraMile to Middletown came about after success with the Shoreline XtraMile service area, which includes Old Saybrook, Centerbrook, Essex Village and the Essex Steam Train, as well as portions of Westbrook. Geraghty described the XtraMile shuttle as a form of public transportation that is similar to existing for-profit ride-sharing services.

“The best way I would describe this service is public-transit Uber,” Geraghty said. “It’s a ridesharing app, and it’s a ridesharing shuttle that will come and pick you up. It’s not a car like an Uber or Lyft, and it is public transit, so it will pick people on the way, and you’ll be with other passengers potentially, but it is a great service.”

Wesleyan Sustainability Office Director Jen Kleindienst explained that the decision to bring the XtraMile shuttles to Middletown was influenced by the population density of the city and the number of people living in the University community, where microtransit seemed likely to be an appropriate form of transportation.

“There was interest in bringing it to Middletown where, the hope was, there’s a lot [of] more densely populated areas, there’s the Wesleyan campus with a bunch of people living in close quarters, and so it seemed like it might be a good opportunity for a microtransit option,” Kleindienst said.

The XtraMile pilot program brings another sustainable public transit option to campus following the launch of the WesPass program last year, which allows Wesleyan students to ride for free on all MAT buses if they show their WesIDs. Kleindienst said the WesPass program had seen nearly 600 rides before the Connecticut Department of Transportation announced the state-wide suspension of bus fares from Friday, April 1 through Thursday, Dec. 1, 2022, which meant the Sustainability Office was no longer able to continue tracking rides from Wesleyan students using the WesPass program.

While the MAT buses are still available to the University community as a public transit option, one concern with the current MAT system is that the routes can be inefficient. Kleindienst said that this challenge helped drive the conversation of encouraging more people, especially Wesleyan students, to take advantage of the public transportation options in Middletown.

“One of the challenges is that the bus doesn’t ride very frequently, and it runs for most of the routes in big circles,” Kleindienst said. “So it might be pretty quick to get from point A to point B, but coming from point B to point A might take two or three times as long. It certainly works, and it gets people around, but not the most convenient for a lot of the routes.”

Geraghty said the XtraMile shuttle pilot program, while available for all Middletown residents to use, is aimed particularly at Wesleyan students. 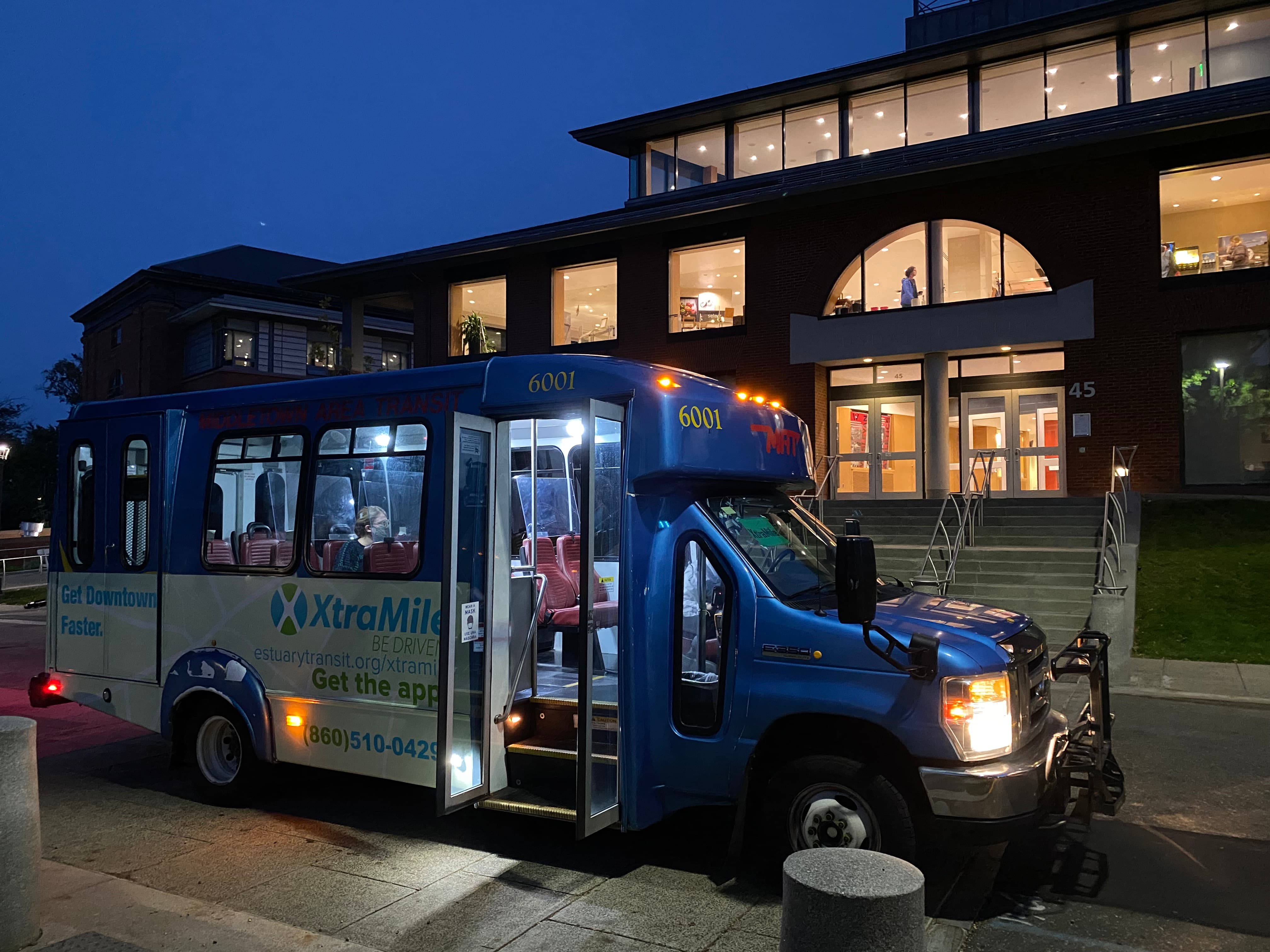 “We definitely have the focus on Wesleyan because currently, we feel that our current transit system, while it does serve Wesleyan students, it’s not great at doing it right now,” Geraghty said. “It’s designed for students in a lot of ways because I think students are more familiar with Lyft and Uber in many cases. It’s through an app, it’s a very similar process.”

The XtraMile program has already seen over 200 passengers since it launched, and is now averaging between 20 and 40 riders a day on weekdays, according to Geraghty, who expects these numbers to eventually grow.

“We’re very happy with our initial numbers,” Geraghty said. “We’re seeing a lot of repeat users as well, so a lot of students, once they’ve used it, are using it…multiple times a week, if not even multiple times a day, which is also encouraging too. So I think the more people we can get to use it frequently, the better the numbers continue to grow.”

Kleindienst hopes to see at least 600 XtraMile rides by the end of this semester, and believes that based on the ridership so far, the pilot program will have no problem surpassing that goal. Now, the focus has turned toward continuing to fund the program beyond the fall semester.

“Our main constraint is that we need state funding in order for this to continue, or some source of funding from somewhere,” Geraghty said. “There is some microtransit funding out there that we’re applying for, so we’re hopeful that we can get funding for future semesters from the state. But if that isn’t the case, we’re gonna have to try and find the funding to continue this somewhere…. Nothing’s set in stone there, but I think we’re happy with [the program] so far, so hopefully if we can get funding, we’d like to continue it.”

If the XtraMile program continues after the fall, the Estuary Transit team is considering adding a fare structure. While rides are free during the pilot period, fares could be added later, following the Estuary Transit District’s analysis of the costs and benefits of collecting fares. However, Geraghty noted that the fares for using the XtraMile shuttle will likely remain cheaper than calling an Uber or Lyft ride.

Wesleyan Student Assembly (WSA) Student Life Committee Chair Orly Meyer ’24 also noted that she has been in communication with Vice President for Student Affairs Mike Whaley and Public Safety Director Scott Rohde about ensuring that the program remains cost-free to Wesleyan students in the long run.

“I reached out to Dean Mike over the summer after [WSA] Senator Jack Johnston [’25] brought to my attention that the shuttle may not permanently be free,” Meyer wrote in a message to The Argus. “After consulting with Scott Rohde, Dean Mike confirmed that the shuttle will be free for students with their ID.”

The XtraMile shuttle is also intended to replace the weekly grocery shuttle offered by the Transportation Services department, which used to run on Wednesdays and Sundays. The shuttle to the Asian grocery store on Saybrook Road will continue to be offered.

Andrew Lu ’23 tried out the XtraMile shuttle for a ride from his woodframe house on Lawn Avenue to Usdan University Center, and found the experience to be generally easy, though he faced some issues with using the app. Lu waited around eight minutes for the shuttle to arrive before boarding, where he rode with one other passenger.

“The app was a bit complicated, taking a few moments to ensure I was on the right route schedule, and then it was not clear that my initial ride request went through,” Lu wrote in an email to The Argus. “After I was on the shuttle, it was only a couple [of] minutes to reach the steps of Usdan.”

Lu had not used any Middletown public transportation options before, and said that he would recommend the XtraMile shuttle as a transit choice.

“I would recommend the service, it was very convenient and the range of possible destinations are enticing to getting off campus and exploring beyond the Wesleyan boundaries,” Lu wrote.

Kleindienst explained that taking a bus route or calling the XtraMile shuttle is more sustainable than students driving to places off-campus by car.

“In general, the most efficient way of traveling anywhere is either on foot or riding something that’s already going somewhere rather than creating a new ride yourself, so buses already on a route or the XtraMile shuttle…[are] much more efficient than trying to drive places on your own,” Kleindienst said. “Uber and Lyft are great options for getting people to places that aren’t serviced by bus routes or the XtraMile shuttle or anything like that, but we would love to see people using services that already exist, in part because it just takes vehicles off the road, and the fewer vehicles on the road, the less pollution, the less congestion.”

Kleindienst is hopeful for the success of the pilot program in bringing another public transit option to the Wesleyan community and the broader city.

“We’ve felt like it’s been pretty promising with WesPass, and now with this new XtraMile program, we think there’s an even greater chance for success just because it’s a need that we haven’t had fulfilled within Middletown,” Kleindienst said.

Andrew Lu is a Head Copy Editor and Assistant Head Photo Editor for The Argus.