Lopii’s “Year iii” : The Magical, The “Blue” and Everything in Between 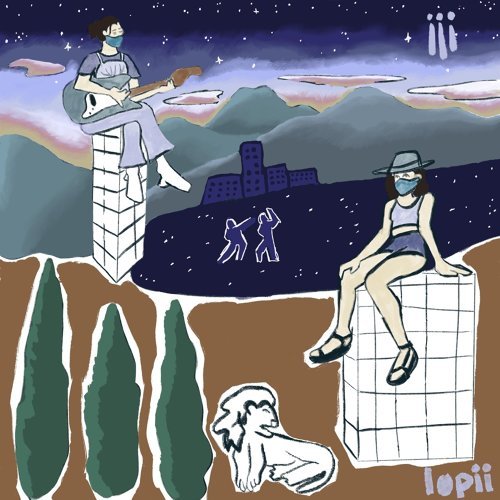 Between the long nights of papers and assignments ahead of me, heavy rain beating on my dorm window and the ongoing COVID isolation, I was not feeling particularly motivated to conduct a Zoom interview. I was eager to meet the members of the band Lopii, Katie Lopez ’21 and Olivia Lopez ’21, and had been listening to their new album “Year iii” for weeks, but going into the Zoom, I was just feeling blah.

That feeling dissipated quickly. As soon as the musical twin sisters appeared on my laptop they greeted me with warm smiles. Their energy and enthusiasm made me forgot about the gloomy weather, my stress, and exhaustion.

Though I’d been humming their songs between classes and on my way to and from Olin, there was something special about hearing their voices live and witnessing their fun-loving relationship.

“Year iii” does not evoke one specific emotion, nor does it belong to one style of music. Rather, it is pop, indie, and folk intertwined into one. The album is autobiographical in its nature, and it is squarely singer-songwriter. Olivia and Katie are interested in storytelling and the album is an exploration of the highest highs and the lowest lows of their life. It tells the story of demos in Spain and songwriting in childhood bedrooms; it grapples with the overwhelming and indescribable emotions surrounding a pandemic that has slowly taken over the world and our lives; it keeps track of junior year and attempts to make sense of and recall events. Sisterhood glues the album together, even though the songs aren’t always explicitly about sisterhood. It finds balance between soft, soothing sounds and exciting, electric beats, allowing its listeners to find meaning in the bizarre and the ordinary. It recounts a narrative that can be listened to again and again so that listeners will always find new meanings.

Before I ended the interview, I told Katie and Olivia how inspired I felt by their work and how I might have to copy them and write something of my own.

“I was recently listening to my freshman year album and it took me right back,” Olivia said. “I’m not kidding you, it works like magic. Make songs, write things, it’s so worth it.”

Starting a band in high school was Katie’s idea. She explained that it acted as a backbone in their relationship and provided them with a creative outlet to return to year after year. Sharing music gives the sisters the space to collaborate and experiment with new sounds, while still allowing them to grow in the areas of music they are each most passionate about.

Olivia, who introduced herself as a writer, musician, and filmmaker, started writing songs at 11 years old.

“I would kind of run around the house and just sing songs that I made up for fun, and my mom would look at me and say, ‘What are you singing? This is really good!’” Olivia said. “Then our dad bought his first iPad, which was a big deal for Katie and I. We thought it was amazing.”

She described how they started recorded harmonies together and making songs for fun. As they started making more music, however, they started making albums, putting their work on Spotify and other music streaming platforms. Throughout their time at the University, Lopii have made an entire album for each academic year, albums which act as time capsules for them to store their college memories.

“The songs are like diaries of things that happened during the year, or just experiences and emotions,” Olivia explains.

Years from now, just listening to a song will transport them back to a specific time and place: the University’s campus, summer vacations, their time spent abroad in Madrid last spring.

Notably, the albums showcase the growth that comes with each year of college. So, listening to each one chronologically adds meaning by providing a sense of the artists’ emotional, as well as musical, development. It also invites listeners to remember their own experiences, particularly those ones to which all college students can relate: first loves, first heartbreaks, new friends, newfound passions.

“Year iii,” as you’ve probably figured out, is in reference to their third year of college. And, yes, the two confirmed that there will be a “Year iv” as their final album in the series, to be released next year.

When Olivia and Katie began their spring semester abroad in Spain, they planned to incorporate their travel experiences into “Year iii.” Unfortunately, when the semester was cut short due to the pandemic, they unexpectedly found themselves heading home to Kirkland, Washington. As eternal optimists, however, the sisters believe that all life experiences, including disappointments, are part of what makes music so fascinating and raw. They described how music can depict real human emotions, and how oftentimes the process of songwriting catches even the artist by surprise.

Beyond the albums portraying change from year to year, the band said that the ordering of songs is also intentional. Since this album was particularly unique based on the given circumstances of the pandemic, Olivia explained how she was able to “geek out,” telling a chronological story that highlights its rollercoaster of emotions.

Before students were rushed home from their semesters abroad, however, Olivia and Katie still squeezed in something they’d always hoped to do: write a song in Spanish. From the sisters’ laughter on their side of the Zoom call, I could tell that “Málaga,” the second song on the album, and the first in Spanish, had a funny backstory. After I probed, they explained how the song came to be.

“We were in Madrid and I made a Tinder solely to find a producer in Spain,” Olivia said. “And so I wrote in Spanish, ‘Please, I’m only looking for producers. I just want to make one song in Spanish.’ And I met this guy who said to me, ‘I would love to produce your song! Come to my studio.’ So Katie and I traveled to his studio where he had been studying music. I’d written ‘Málaga’ just a couple weeks before and we recorded it in the studio with him, and he produced it, and now it’s on our album. It was such a crazy experience and it was so much fun. We got to practice our Spanish with him, and we met his friends. We just got to see this whole other part of Madrid…It was magical. I have no regrets in that regard.”

After “Málaga” comes “Blue,” which was written immediately after the sisters arrived home in March. It tells the story of sadness, of missed experiences, of nostalgia. Of course the sisters hadn’t expected to end the semester writing lyrics from their childhood bedrooms, but this had become their reality. The song rings truthful to the time, and though it is filled with upsetting emotions for the sisters, it is a piece they both take pride in.

“I did play guitar on Blue. That was my child,” Katie said.

“My Story,” the final song on the project, is special to both sisters because they can remember recording the song’s demo, which ended up being the take on the album. “I want to love you for eternity,” the sisters sing. The song depicts a vulnerable, romantic relationship between two people, and the heart-felt, vulnerable harmonies in the chorus recall the butterfly-like feeling that takes over a human being when they fall in love. Not only are the lyrics especially meaningful, but they both acutely recall the feeling of singing the words alongside each other.

“That first recording is the demo; we never changed it,” Katie said.

“We listened to that demo so many times, and we just decided that we couldn’t change it,” she said.“‘My Story’ really hits me; I think we both have a lot of emotions towards the song.”

My favorite song on the album is “You Are Magic.” It also happened to be the first song that played when I clicked “shuffle” the first time I listened to “Year iii,” so in a way it laid the foundation of my relationship with the band and their music. The song begins slowly, but it picks up while maintaining a tone that is still peaceful. The chord progression and romantic lyrics, which speak of wanting to run away with a new love, make me feel like I’m in a coming-of-age movie. The line “Just say the word, and we’ll go, drive all night on those midnight rows,” which begins the chorus, makes me feel like Emma Watson in “Perks of Being A Wallflower,” when she stands up in the back of a speedy pickup truck in the Fort Pitt Tunnel, her arms flailing in the air and David Bowie playing the background as they drive by the yellowed subway tile of the tunnel walls. “You Are Magic” is the kind of song I want to belt on a highway.

Olivia tells me that “‘You Are Magic” always makes her cry.

“It’s really hard for me to listen to it. I wrote it in one take and I recorded it in one take. That one has always been really important to me,” she explains.

As the sisters are almost halfway through their final year of college in a very unusual senior year, they look toward their music as a way to capture memories and make new ones as well.

“I think with each of the albums, our ultimate message is about how much this experience at Wesleyan and these people and places mean to us,” Olivia said. “And also that it is okay to grow and change and learn from your mistakes because there is such a beauty in that.”

Abby Glassman can be reached at aglassman@wesleyan.edu.