“Woman and Scarecrow”: A Confrontation of the Self 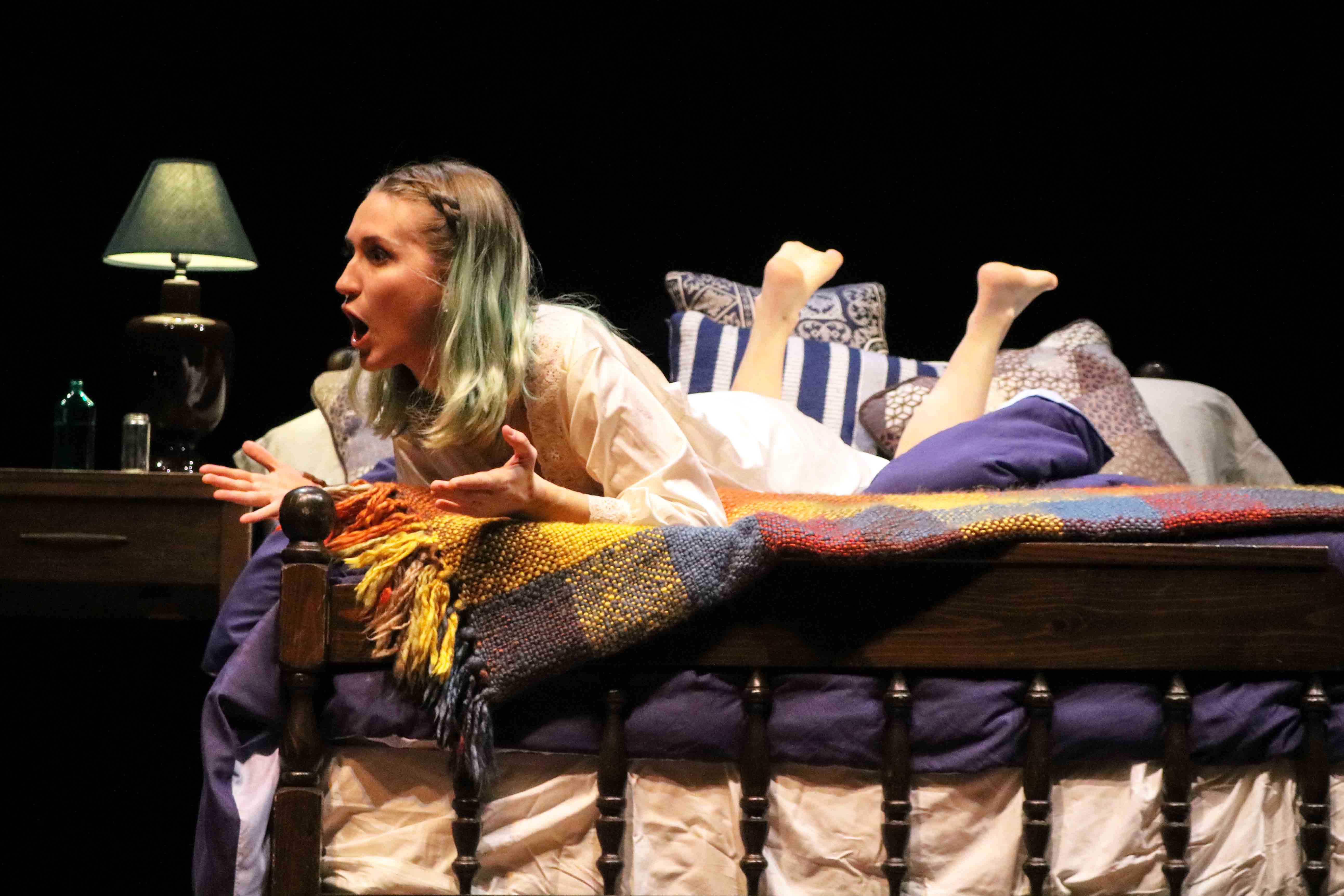 Saying goodbye can be a punishment: a choice to cut yourself off from the people that you love. Closing the book on the chapter of yourself written alongside another. However, saying goodbye can also be a blessing: a liberatory freeing of the self from responsibilities, toxic relationships, and everyday annoyances. An exorcism of the things that haunt you. More often than not, it is both a punishment and a blessing. This reality gets staged with both brutal intensity and quiet reflection in “Woman and Scarecrow” (running Jan. 30–Feb. 1 in the ’92 Patricelli Theater), written by Marina Carr, one of the premiere modern Irish playwrights. An extended meditation on the value of living, a poignant portrait of a woman reckoning with death, and a psychological confrontation of the self, “Woman and Scarecrow” is many things. But more than anything, it asks audiences to see the dual nature of goodbyes: how the end of life frees not despite of, but through, its pain.

The play follows Woman (Grace Stanfield ’21), a bed-ridden fifty-six-year-old woman who’s attempting to reconcile her past and seemingly ready to embrace an impending death due to an unexplained sickness. We see her in a bedroom that looks normal, except for the fact that set designer Max Halperin ’20 has draped dark curtains surrounding the stage, setting it in a dark void. Hovering around Woman is Scarecrow (Sarah Norden ’22), a mysterious figure donning a white shirt that’s been splattered with a dark ink over her chest and arms. It looks as if there’s been an epic struggle and something has been smothered over Scarecrow’s chest: But was Scarecrow the one engaging the violence or the victim of it? Most of the show functions in an abstract state that leaves these questions unresolved, despite that much of the dialogue sounds like realistic conversation. For example, the relationship between Woman and Scarecrow never seems definitively set, as the balance of power continually shifts between the duo. Sometimes Woman behaves as a domineering Master with Scarecrow as a peevish servant; other times they reminisce on memories like old friends or lovers, only to later engage in well-worn, familiar arguments that only mothers, daughters, or sisters might have.

The central relationship between the two title characters is one that director Nathan Baron Silvern ’21 worked extensively with Stanfield and Norden to explore in all of its complexity.

The physical connection between Woman and Scarecrow takes on high stakes early in the play, when the two get into an argument ending with Woman threatening to hold her breath if Scarecrow doesn’t turn on music. After calling Scarecrow a “stinking old turkey box,” Woman follows through with her threat, and what starts out as a childish skirmish becomes a deadly threat of violence. We see Scarecrow choking alongside Woman—she cannot breathe without Woman breathing—before desperately scrambling to turn on a CD Player. As the soothing sound of Demis Roussos’ music plays, Norden’s Scarecrow lies on the ground, panting and exhausted, while Stanfield’s Woman lounges on her bed as if in delightful relief. It’s a very human moment, one person slowly daring another before they both break. But it’s also a metaphysical one, revealing the ways in which Woman and Scarecrow are irreparably bound to each other, in pleasure and pain.

It’s scenes like this, in which characters quickly cycle through taunting, stubbornness, desperation, self destruction, and even erotic happiness that make “Woman and Scarecrow” stand out as a singular vision. As Woman and Scarecrow continue their arguments, we slowly learn more about Woman’s past: how her mother died while pregnant, how she was the mother of eight children, and how her husband’s infidelity has affected her. However, what makes the show so absorbing isn’t so much in learning about these revelations as it is hearing the characters describe them. Carr has a unique gift for language that can just as easily dip into lyrical, lush description as biting, wry humor. For example, Woman describes witnessing the death of the mother as a preview of her own death by stating, “I swim in her eye, she in mine, we’re spellbound, unsmiling, conspirators too wise to fight what has been decreed on high long, long ago.” Woman sees her impending death as an inevitability, but one that she is perhaps actively quickening. However, Woman is also the type of character who can just as easily asks, “Tell me what it is about dying that’s so sexy!” before delightfully musing on the end of her own existence. Woman is in a lot of pain, but Stanfield’s performance always keeps us aware that she’s self-aware of the absurdity of her bed-ridden state.

There’s a repetitive, circular nature to the show. As a writer, Carr is always undercutting beautiful monologues with jokes about Woman’s fatalism, or philosophically debating the value of life itself without prescribing any clear meanings to it. Watching the show could be a frustrating loop of dialogue and action that always reverses itself. But Silvern sees the elusive nature of the play as a welcome challenge.

“This play has so many contradictions, the text gives very few answers,” Silvern said. “Characters often literally just contradict themselves within pages of each other…. So creating characters that are able to encompass all these different things, especially Woman and Scarecrow, has been a really amazing challenge.”

Silvern also praised his actors’ dedication to the project, as “Woman and Scarecrow” was a winter intensive, an opportunity provided by Second Stage to rehearse the show primarily over the last two weeks of winter break.

“I highly recommend that anyone who does theater at Wesleyan should do the winter session, or apply for it if they can,” he said. “We were truly so lucky to be able to work within the space, the performance space, for the entire rehearsal process. Despite how condensed the process was, we also got to spend basically two full weeks only working on this one thing, without homework without other distractions to worry about. Which meant we were eating meals together, we were spending time away from rehearsal together, we got to work through the play outside of rehearsal together.”

The closeness of the cast was evident in the lived-in quality of all the characters’ interpersonal relationships. This is especially true when people from Woman’s life start arriving to say goodbyes to her. This includes Auntia Ah (Mallory Elliott ’23), a stern religious figure whose critiques of Woman’s mental state that are unfairly dismissive. Even more impactful is Woman’s husband Him (Nika Litt ’21), a beguiling and often brash presence who eventually creates the most comforting moments of intimacy onstage. But as the death seems to creep closer and closer on Woman’s soul, she finds herself for the first time reconsidering her own memories, and the narratives she has been telling herself. But these last-minute revelations come almost too late when a surreal creature arrives bursting out of the wardrobe in her room, the harbinger of death and the embodiment of Woman’s deepest desires.

It was in these decisive moments that I felt the sudden pain of witnessing “Woman and Scarecrow” end, despite its lengthy runtime. Less important than the show’s circular narrative, or even its masterful control of dramatic language, is the entrancing meditative state that watching the show puts you through. It’s a world that never forgets the day-to-day mundane frustrations of living, but also gestures towards an awareness of the sacredness and possibilities that existence can give. Watching Woman staring death in the eye, even though the whole show had been preparing me for that point, I held my breath out of fear. It was as if I were her Scarecrow. When the show ended, it was almost as if we both let out a sigh of relief. Saying goodbye to the show was itself a blessing and a punishment: a peaceful escape from the unrelenting frustrations repeating in Woman’s tortured life, and also a loss of the quietly moving space of this production.

Nathan Pugh can be reached at npugh@welseyan.edu.