Twenty Years Later, “In the Heights” Returns to the ’92 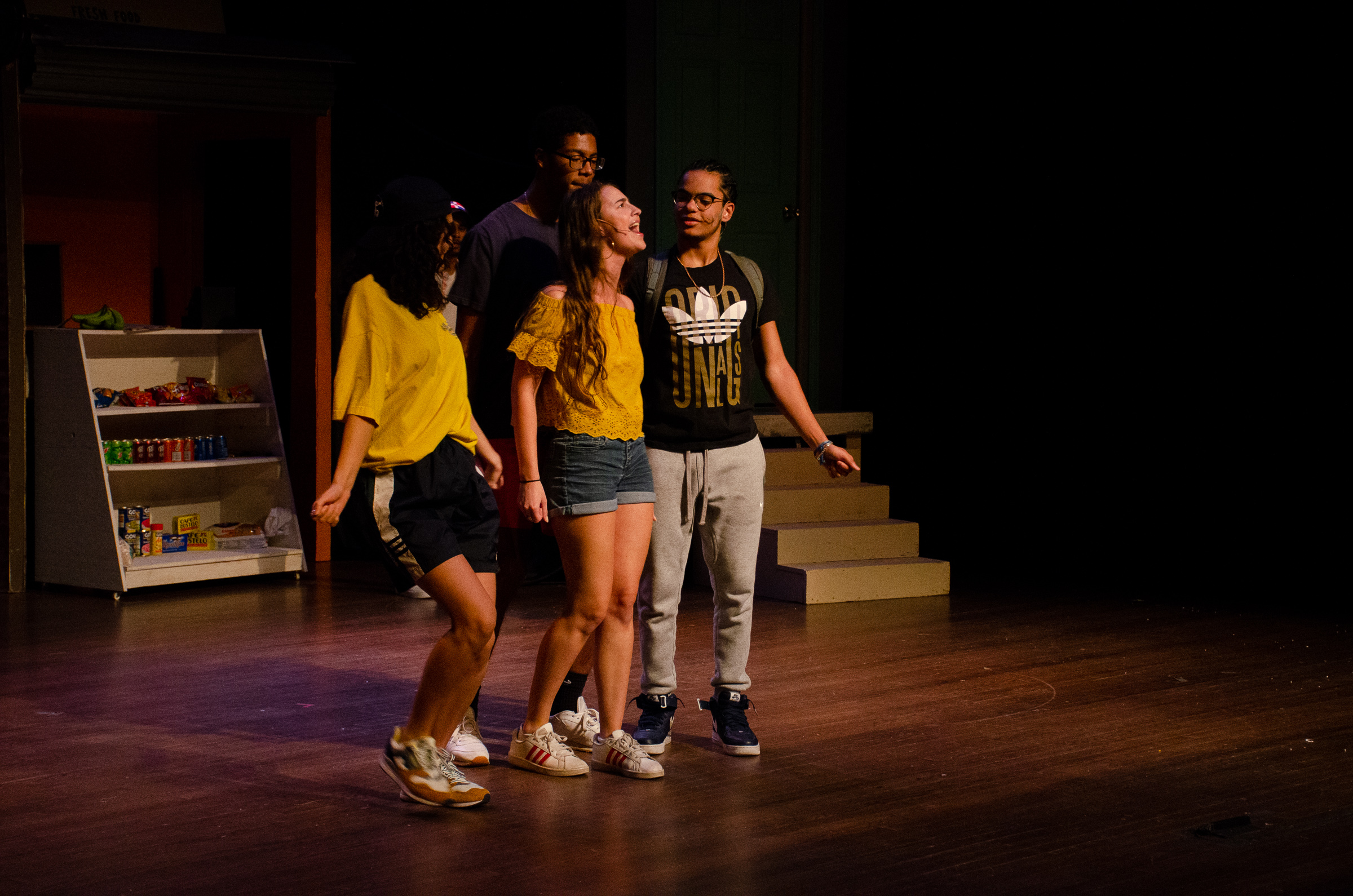 When the very first incarnation of “In the Heights” premiered in the ’92 Theater in April 2000, it broke Second Stage attendance records for the entire year. If the line stretching out of the building this past Wednesday night—just to get into the dress rehearsal—was any indication, the show’s return to campus almost 20 years later is about to be similarly popular with the student body.

“In the Heights,” which was originally created by the University’s most famous alumnus (at least, the one I get the most questions about while giving campus tours), Lin-Manuel Miranda ’02, and was directed this weekend by Milton Espinoza Jr. ’22, takes place over the course of one summer weekend in the Manhattan neighborhood Washington Heights. The musical documents the lives of the residents of a single block, including protagonist and bodega owner Usnavi (Akash Bhide ’22) and his cousin Sonny (Sergio Venizelos ’22), college student Nina (Kayla Cabán ’22), car dispatcher Benny (Cobey Arenal ’21), and neighborhood matriarch Abuela Claudia (Darielis Rivas ’23).

The real genius of “In The Heights,” which won the 2008 Tony Award for Best Musical for its Broadway production, has never been in its plot, which is frankly is a little treacly. By the end of the second act, all four main characters are neatly paired off romantically, and virtually every source of conflict or narrative tension—whether Usnavi will return to his native Dominican Republic like he dreams, whether Vanessa (Thaïs Garcia ’23) will make it out of her terrible apartment and move downtown, whether Nina will return to Stanford after losing her scholarship during her first year, whether the neighborhood’s residents will maintain their irrepressible spirit in the face of increasing gentrification—is neatly resolved, with nary a loose thread or unhappy character in sight.

Where “In the Heights” really sings (no pun intended) is not in the specifics of its storyline, but in its vivid evocation of a demographic that’s not traditionally seen onstage. This is primarily thanks to its music, which blends the sounds of hip-hop, Latin pop, salsa, and traditional musical theater to create something genuinely unique. The show’s vibrant soundtrack is its backbone, and—thanks to its fast-paced rapping and frequent switching between English and Spanish—it is also no small feat to perform live. Of all the characters, no one has a more formidable job than the show’s star, Usnavi, and Bhide pulls off his verbose, high-energy musical numbers with remarkable fluency and charm. Bhide’s rap-heavy role is arguably one of the most difficult, but the rest of the cast also gets a chance to show off their considerable vocal chops in the show’s large group numbers, like “In the Heights” and “Carnaval del Barrio,” which are some of its biggest highlights. 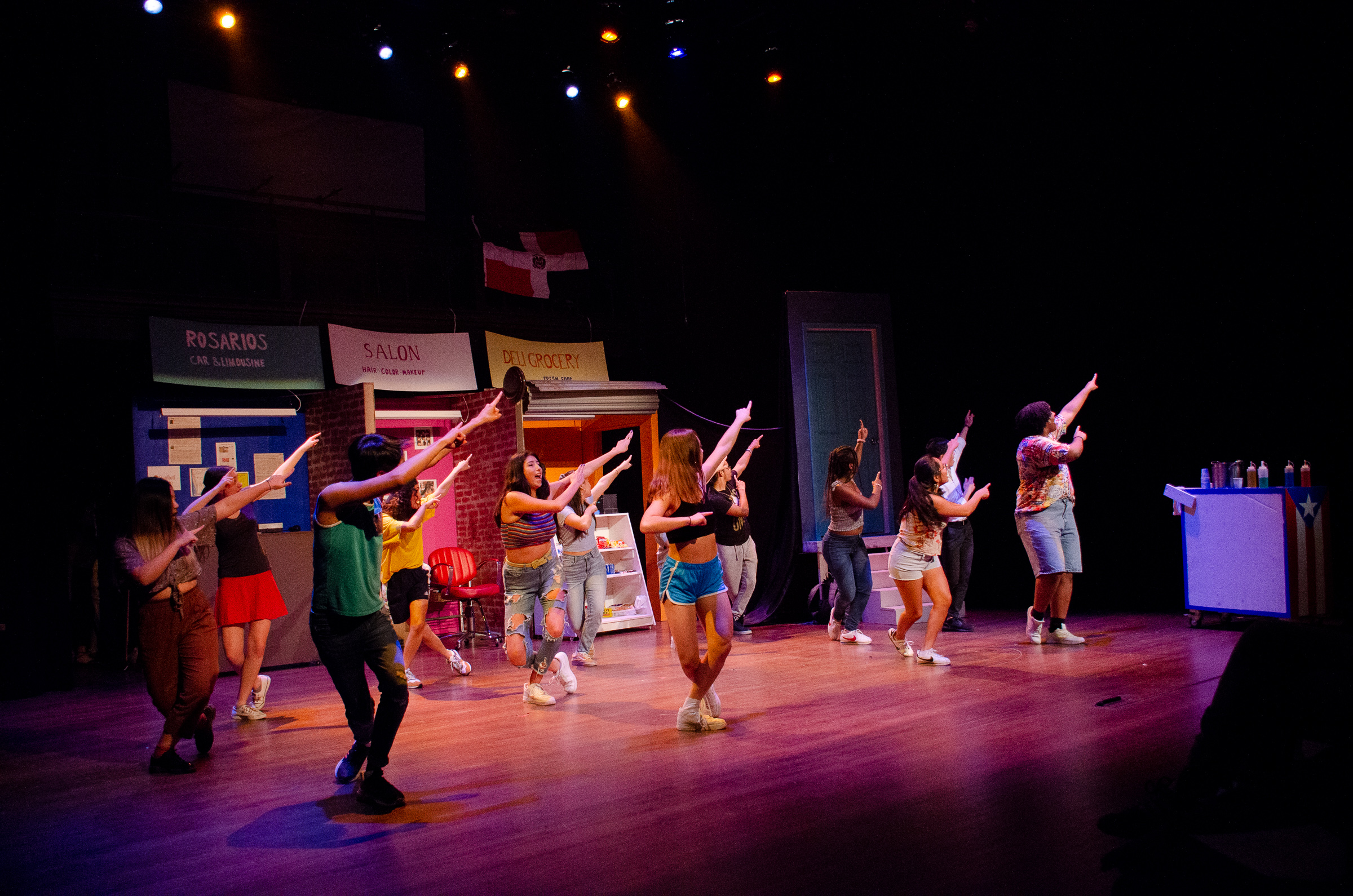 Even outside of its musical numbers, the cast brings an infectious energy to their performances. Bhide is an obvious standout, as are Cabán and Arenal, who shine both separately and together. Cabán brings both stubbornness and vulnerability to her performance as Nina, and it’s hard not to root for Arenal’s lovestruck Benny. Outside of the main cast, Dachelle Washington ’22 is a highlight as Daniela, the owner of the salon next to Usnavi’s bodega, elevating her gregarious, gossip-loving character from what might otherwise be pure comic relief to something more three-dimensional.

Complementing the dynamism of the cast, the bright colors and patterns of the show’s set and costumes add to the overall vibrance of the show. In fact in most respects, “In the Heights” faithfully captures the spirit of Miranda’s original show, albeit with slightly less polish. One noticeably unique artistic choice in this version of the show occurs in the second act during “Carnaval del Barrio.” In the middle of the song, while Usnavi raps about remaining upbeat and treasuring the present even as the neighborhood teeters on the brink of major changes, images of protest and resistance—Colin Kaepernick, the March for Our Lives, Tommie Smith and John Carlos at the 1968 Olympics—flash on a screen upstage. It’s an interesting choice, but the juxtaposition is a little confusing, given the message of both that song, which is essentially about celebrating, and the show as a whole.

And here lies the largest shortcoming of “In the Heights” as a story. I don’t want to understate the importance of diversity in theater, or the inventiveness of Miranda’s songwriting, but it’s a mistake to conflate representation with radicalism. At its heart, the musical presents a fundamentally old-fashioned—arguably even conservative—message about what it means to live in America. The story does deal with the difficult realities of working class and immigrant New Yorkers, such as when Daniela’s salon is forced to pack up and relocate to the Bronx due to rising rent, or when Nina’s father sells his car service to developers in order to pay for her college tuition. But the show still depicts a version of society where pluck, hard work, and a strong sense of community is a solution for all ills. Nowhere is this more evident than in the final scene, where Usnavi decides to remain in New York instead of moving back to the Dominican Republic. This scene paints a fundamentally rosy portrait of the city as a place where no amount of gentrification or economic hardship can kill the city’s spirit or make it truly inhabitable to Usnavi and his neighbors.

This portrayal of New York City as the kind of place where the more things change, the more they stay the same, is comforting because it minimizes outrage and justifies inaction, but is it based in reality? The average rent in Washington Heights is now over $2,000. Every year the city grows less and less livable for its poorest residents. New York—and in fact, the entire country—is changing, and not for the better. In 2000, maybe it was enough for “In the Heights” to have a beautiful, innovative soundtrack and a diverse, talented cast. In 2019, I believe art can go further.