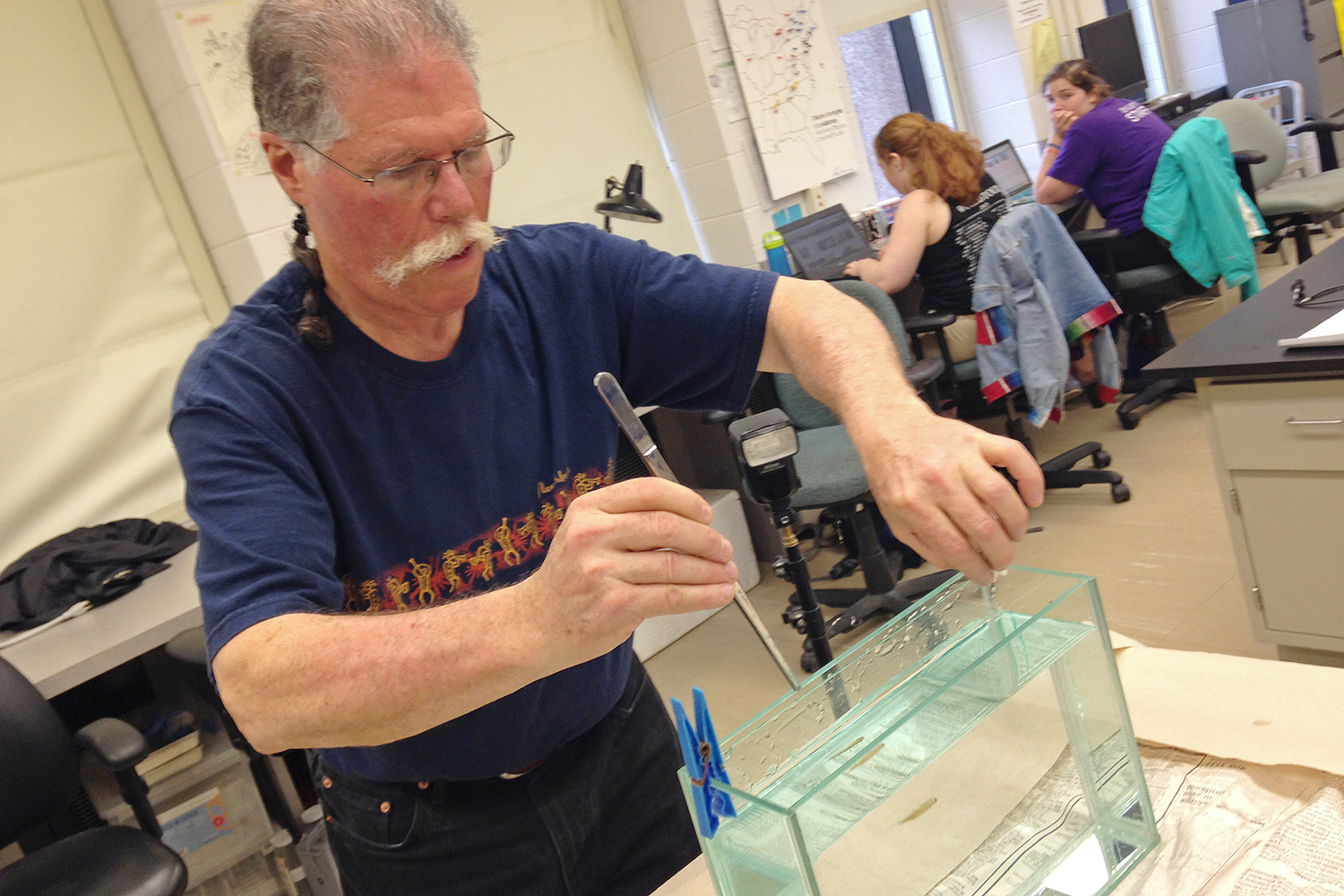 A species of fish has recently been named in honor of Barry Chernoff, the Robert Schumann Professor of Environmental Studies. The fish species—Bryconops chernoffi—was discovered in the lower Amazon basin of Brazil, an area where Chernoff has devoted much of his research. This is the first species for which Chernoff has been named.

“There are probably a hundred fish species named every year and discovered…and maybe two or three of them are named after people,” Chernoff said. “So the percentage is very low, and it’s the first one in my career.”

The species was described in a 2018 paper submitted to the journal Zootaxa, entitled “A new species of Bryconops Kner (Characiformes: Iguanodectidae) from the Rio Maicuru, lower Amazon basin, Brazil.” Prior to the discovery and the description of Bryconops chernoffi, the Bryconops genus—common in this region of Brazil and confined to the tropics of South America—had 21 known species. This particular species comes from a small biome: limited to a small tributary of the left Margin of the lower Amazon river. The type locality for Bryconops chernoffi, as noted in the paper, is a freshwater pool gathering above a waterfall on the Rio Ipixuna, which is a small tributary of the Rio Maicuru river in Brazil.

“The present contribution describes a new species of Bryconops belonging to the subgenus Creatochanes from the Rio Ipixuna, a tributary of the Rio Maicuru,” the paper reads. “The Rio Maicuru is a direct tributary of the Amazon River, being one of the relatively small, Guyana shield-draining northern-bank tributaries of the Amazon river lying between the Rio Jari and the Rio Trombetas.”

The species, as described by the paper, has a light brown snout and lips, and a dorsal fin with variably developed red pigmentation. The paper notes that prominent features of B. chernoffi include a dark dorsal fin and an elongated area of pigmentation behind the facial bones of the fish. Individual lengths of B. chernoffi, as presented in the paper, range from 45.9 mm to 59.6 mm.

Chernoff noted that his discovery of this paper, and Bryconops chernoffi, was unorthodox.

“So about three weeks ago…I received this weird email in my junk folder from something called ‘The Dictionary of Eponyms,’” he said. “There was this thing sitting there in my junk saying ‘Dictionary of Eponyms.’ And I’m about to nuke it forever, when I saw that my bio was in it, and they were asking for biographical information. And I thought ‘Oh, this is like the [phenomenon] where you can pay money and put yourself in a who’s who…it’s become a big scam.”

Chernoff went on to note that upon looking closer at the email, he discovered that his name was written in tiny font next to the genus Bryconops.

“It was just in tiny type like 7-point font, and I saw this, and then I went to the literature and looked for [my name], and in fact there it was!” Chernoff exclaimed. “So I got this ridiculous email and that’s how I discovered it.”

When a species is discovered, its name is most often derived from a Latin or Greek root, which refers to morphology, location-of-discovery, or another relevant element of the species and biota. Those who are describing a species are also prohibited from naming the species after themselves. Thus, it is rare for a species to be named for an individual—even one who has contributed prolifically to the body of work on the genus, as in Chernoff’s case.

The paper describes the species name derivation, noting the contributions of Chernoff to the field.

“The specific epithet honors Barry Chernoff, and is in recognition for his contributions to the taxonomy of Bryconops, as well as for ichthyology as a whole,” the paper reads.

Chernoff’s work in Latin America on fish, he notes, is relevant to his current work at the University. Primarily, he explained, he has been concerned throughout his career with conservation biology and understanding biological patterns.

“My work has always been about uncovering patterns of biodiversity,” he explained. “And looking at patterns of how the biota of the world—the fish world, anyway—came to be and why they’re distributed in time and space the way they are.”

Chernoff noted his appreciation for the honor.

“This is a complete shock, and I wrote to the fellows to thank them profusely,” he said. “You know, it’s the honor of a lifetime.”