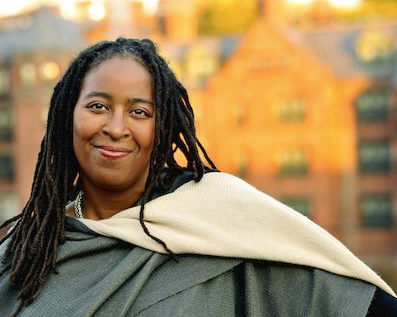 Students and faculty crowded into Russell House this past Wednesday to hear accomplished poet Camille Dungy read her work. Dungy, who is the University’s 2018 Millet Writing Fellow, is the author of four collections of poetry as well as a book of essays. Over the course of the night, she read several poems from the most recent of these books, “Trophic Cascade,” which was published by Wesleyan University Press in 2017.

Dungy’s first poem of the night, “Natural History,” recounted her experience of holding the miniscule nest of a Rufous hummingbird, and being suddenly reminded of an old acquaintance from Virginia named Mrs. Jeffers. “Natural History” contemplates Mrs. Jeffers and her close ties to her own home, much like those of a bird to its nest.

“I guess it’s no surprise/they’d come to mind when I think of that cup/of spider webs and moss, made softer by the feathers/of some long-gone bird. She used to say, I like it/right here where I am. In my little house. Here,/with him,” Dungy read.

As it does in “Natural History,” imagery relating to the natural world runs throughout much of Dungy’s work. In fact, prior to writing “Trophic Cascade,” Dungy edited an anthology called “Black Nature: Four Centuries of African American Nature Poetry.” As Dungy read more of her work, the significance of the outdoors and nature to her life and work became more and more evident, and nowhere was this significance clearer than in the poem “Trophic Cascade.” The poem (from which Dungy’s anthology takes its name) refers to an ecological phenomenon in which the addition or removal of a predator species has a snowballing effect on the ecosystem, affecting all the flora and fauna in the area. “Trophic Cascade” details the cascade that occurred when Yellowstone National Park reintroduced the gray wolf to their land. Dungy described the wide variety of species that were impacted by the arrival of the wolves; first the deer population decreased, then the trees they had been grazing on began to regrow, then the songbird population increased because of their growing habitat, and so on. Towards the end, the poem takes an intensely personal turn.

“Don’t/you tell me this is not the same as my story. All this/life born from one hungry animal, this whole,/new landscape, the course of the river changed,/I know this. I reintroduced myself to myself, this time/a mother. After which, nothing was ever the same,” Dungy read.

After reading the poem, Dungy explained her reasoning for choosing it as the title poem for the entire collection.

“A trophic cascade…is the biological term for the cascade of change that happens when you introduce or remove a top predator from the food chain,” Dungy said. “This book was very much about the ways that my thinking—about my life, about history, about the landscape around me—were shifted and changed with the introduction of my daughter. That’s the introduction part, but there’s also the question of a removal, and that too played pretty heavily into this book, and thinking about the ways that everything we know about the world also shifts when we lose our elders, when we lose a species, when we lose our sense of the world and the beings who live in it and on it.”

If “Trophic Cascade” addressed the changes wrought by the addition of a family member, Dungy’s next poem, “One to Watch, and One to Pray,” examined the effects of losing a loved one. The poem, whose title comes from a rhyme Dungy learned as a child to help her remember the names of the Gospels, describes Dungy’s experiences by the bedside of a dying relative, soon after the birth of her daughter. “One to Watch” juxtaposes the early stages of one life with the end of another:

“Though several days later someone told me/people somewhere in West Africa pass a baby over the bed/of a dying person to say there will always be new bodies/to celebrate and mourn, that night we only knew the baby needed a change/and someone had to take her, and so we passed the baby/over the bed and decided who would stay to watch her go.”

Along with poetry, Dungy also read an excerpt from her essay collection, “Guidebook to Relative Strangers.” In the essay, Dungy described a trip during which she tripped in the middle of a hike and injured her foot, leaving her unable to walk back. Her companions attempted to help her, first by letting her use them as human crutches and then by carrying her, but soon ran out of energy and Dungy, determined to make it down the trail, decided to crawl the rest of the path on her hands and knees, to the horror of her friends.

“He told me later he was terrified some other group of hikers would come along and discover all these white people standing around, watching a black girl crawl through the woods,” she read, to laughter from the audience.

As she had been doing all night, Dungy then powerfully connected this personal story to a larger idea, a discussion of the ways people can become Othered by sacrificing their pride.

“The whole time we were working to get me off the mountain, I thought I was worried about the pain in my ankle, and the burden of my weight,” Dungy said. “I realize now that my other big worry, what I feared the whole time on the hill, was that I would have to let go of my pride. These are the ways human history cross-pollinates with all our interactions in the world.”