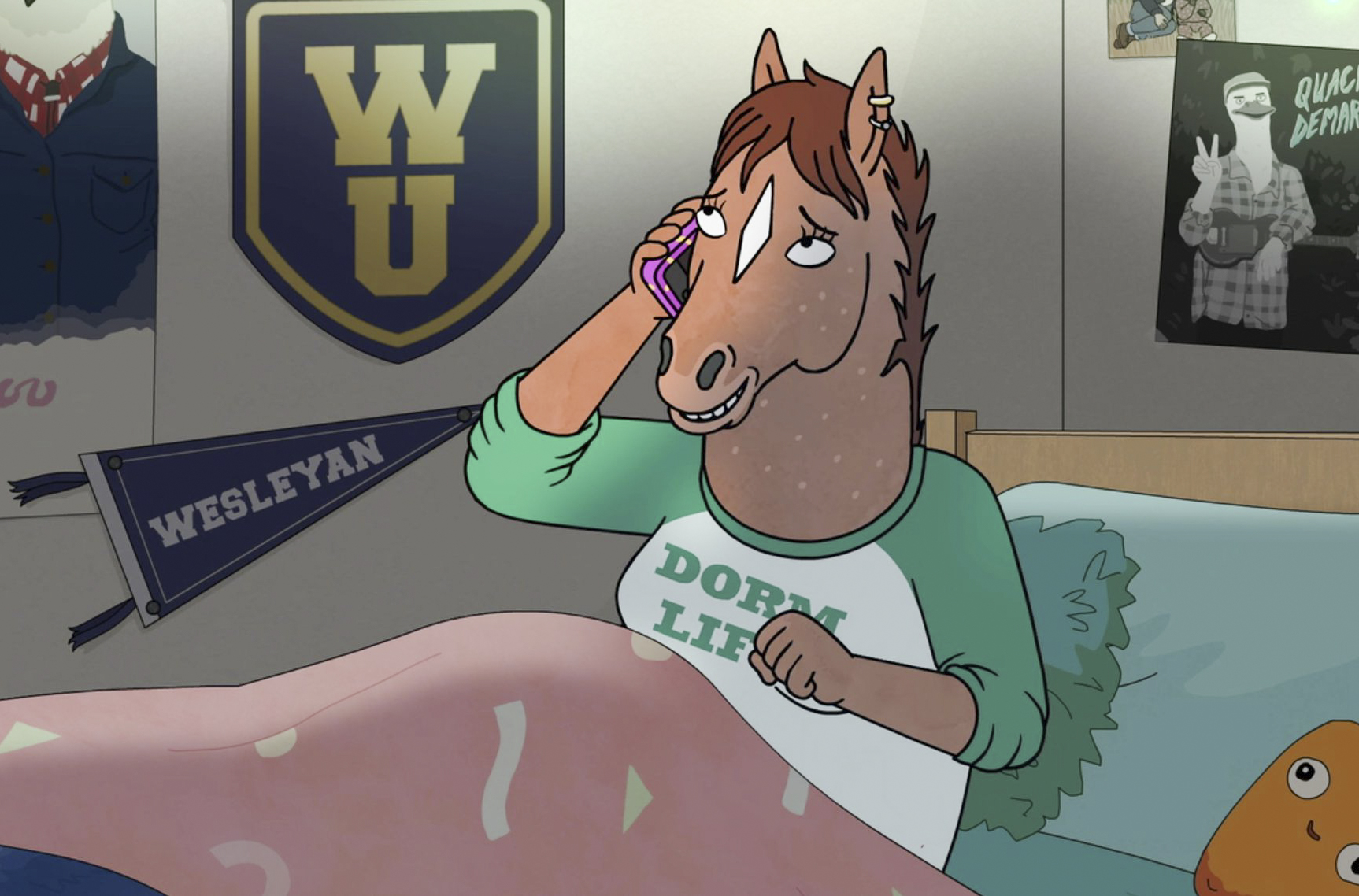 An animated show depicting anthropomorphic animals living alongside humans might sound like the concept of a PBS children’s show. Yet “BoJack Horseman,” a show with just this premise, is anything but. The fifth season, which came out on Netflix on Sept. 14, demonstrates this beyond any doubt.

Season 5 of “BoJack” is astounding. It is emotionally gripping and horrifying, wringing out characters until they are bare, weaving complex and gritty stories throughout each episode, experimenting with plot and storytelling. I have never seen another season of BoJack, or television, in general, like it. Each episode has its own unique, interesting narrative; together they fit into the wider story of the life of BoJack Horseman, and those close to him. It is at once hilarious and devastating and deeply dark.

The show takes place in a close replica of our own reality, containing parodies of many modern American companies and industries. A few examples include MSNBSea, with a show hosted by a blue whale, Warbler Bros, and Penguin Publishing (with an actual penguin publisher). This concept allows for countless possible puns, including characters that mimic real-life individuals, such as Quentin Tarantulino (Quentin Tarantino, except he’s a tarantula). Because the show is animated, it also permits the presence of real-life movie stars playing characterized versions of themselves, such as Daniel Radcliffe appearing as himself in Season 2.

The show follows washed-up actor BoJack Horseman, a horse voiced by Will Arnett. BoJack is famous for his 90s sitcom “Horsin’ Around,” in which he plays the adopted father of three human orphans. This show was incredibly popular and came to define BoJack’s career. Now, in the 2010s, he feels he cannot escape the role. He is a heavy drinker and drug user; he is lonely and deeply insecure. The show follows his various relationships, most of which he manages to screw up in some manner or another. Throughout the show, he develops a complex and difficult friendship with his ghostwriter Diane Nguyen (Alison Brie), lets a boy named Todd Chavez (Aaron Paul) sleep on his couch in an attempt to find human companionship, and has a semi-professional, formerly romantic relationship with his publicist, a cat named Princess Carolyn (Amy Sedaris).

The show is funny. The characters will find themselves in hilarious situations—particularly Todd, who regularly enters into the most ridiculous scenarios possible. This includes, in this new season, a plotline in which Todd accidentally causes a sex robot to be hired as the CEO of the online company “What Time Is It Right Now?” A golden retriever named Mr. Peanutbutter, another former 90s sitcom actor, is essentially BoJack’s foil for most of the show. He regularly pisses BoJack off in incredibly funny ways—for example, exclaiming: “What is this, a crossover episode?” every time the two come into contact.

But the show has never refrained from getting dark. After all, its lead character is a deeply haunted and lonely alcoholic who leaves a trail of irreparably damaged former friends and lovers behind him. This becomes clear within the first season of the show.

And the new season is dark in a way that it hasn’t quite been before. It is dark in a way that brings BoJack to a point of utter collapse, of near-death. Throughout the show, the writers test audience members’ sympathy for BoJack making him more and more unlikeable and forcing watchers to question whether to continue to support a horse who is clearly so problematic, and who has ruined so many lives, particularly women’s lives. In this season, we must ask ourselves if BoJack has gone too far.

In the beginning of the season, the underlying darkness and grittiness is disguised by humor, as well as the episode formula that the show uses primarily in seasons one and two. The first few episodes of this season follow BoJack as he plays the titular character in a new brooding detective drama, “Philbert.” Philbert’s home in the show is strangely similar to BoJack’s own flat (“Spare, lonely, precariously balanced on the hill of his own isolation”), and Philbert, as a character, is strangely similar to BoJack himself: an alcoholic, an isolated man using his work to disguise immense interior pain and a tortured past. Throughout the season, the two become difficult to distinguish. This culminates in episode 11 of the season, in which the plotlines of Philbert and BoJack’s own lives are interwoven in a confusing and surreal narrative. BoJack becomes Philbert, and vice versa. The identity confusion goes too far. A horrifying scene ends the episode, in which BoJack comes moments away from choking his co-star and hookup, Gina Cazador (Stephanie Beatriz) to death. He is on a heavy number of pills during this scene; he cannot remember having done this the next day.

This episode emphasizes a theme explored throughout both this and previous seasons: how women deal with trauma, assault, and harassment in Hollywood, without letting it define careers and names. Right before Gina and BoJack go on a talk show to discuss the choking (a video was leaked), BoJack says to Gina that he wants to come clean. She firmly tells him not to.

“You physically overpowered me, and if there was any justice, you would be in jail right now,” she says to him. “But my career, after so many failed attempts, is finally starting to take off. I am getting offers, and fan mail, and magazine columns about what a good actor I am. People know me because of my acting. And all that goes away if I’m just the girl who got choked by BoJack Horseman.”

It’s a potent scene, and a heartbreaking one. It is emblematic of BoJack’s entire history of causing women trauma—something BoJack feels overpowering guilt for, but fails to change. The audience must question their allegiance to BoJack. It is hard to continue to sympathize with him, but we are asked to do so.

There are multiple remarkable episodes and scenes in the new season. Princess Carolyn’s struggle to adopt a child is well-developed throughout the season, particularly in episode five, “The Amelia Earhart Story,” in which we learn that Princess Carolyn became pregnant while in high school, and then had a miscarriage. It’s a deeply affecting episode, providing context for her life, and giving her an appropriately complex backstory. Princess Carolyn grew up believing she would be a housewife—this may feel somewhat unbelievable to viewers, given her love for her job as a publicist. It’s an emotionally rich episode that stands well on its own, and provides a nice break from the harsh dramas in BoJack’s life.

BoJack’s addiction to pills is explored most notably in episode nine, “Ancient History.” Hollyhock (Aparna Nancherla), Bojack’s half-sister, visits him in LA on her way back home from Wesleyan, where she attends school (which is pretty damn awesome). The entire episode is essentially a desperate hunt for pills, after Hollyhock dumps BoJack’s supply down the drain. The episode culminates in BoJack T-boning a car in order to get hurt badly enough to receive a new supply of pills. This horrible scene, and all that it implies, is largely brushed off for the remainder of the season, though these pills are the culprit for the identity confusion in episode 11.

By far, the most significant episode is “Free Churro.” It is just stunning. It demonstrates one of the best aspects of BoJack humor: the sweet payoff from hearing the culmination of long-running jokes, such as Todd’s numb-tongued run-in with the Mafia, or the midnight crow of the cock. “BoJack Horseman” has a way of planting kernels of humor throughout an episode to later have them explode in hilarity at unexpected moments, making an audience member feel like they’re in on a grand joke.

But this episode’s payoff is not humorous. It comes in the form of slow-burning realizations and an incredible build of emotion. The episode covers the rise and fall of BoJack Horseman’s eulogy for his recently dead (or decently read?) mother, as he stands beside her casket and before an audience. Save for the opening scene—a flashback in which BoJack’s father picks him up from school and tells him his that he cannot depend on his mother for anything, can only depend on himself—the entire episode is BoJack, in front of us, the audience, speaking about his mother.

But he does not know how to speak about her. Throughout the episode, he is caught between his role as a performer in front of an audience, his guilt, his anger at his mother, and his utter inability to understand her. It is a testament to the emotional skill of Will Arnett and the incredible talent of the show’s writers. BoJack’s speech weaves a drama of anger and pain and disgust and hurt, as he dissects his mother’s final words to him, “I see you,” in an attempt to understand their relationship. Toward the end of the speech, he realizes she was not saying “I see you,” but reading the sign behind him, “ICU,” or Intensive Care Unit. There is no ultimate meaning. At the end of the episode, BoJack is left with nothing.

There are more complicated breakdowns in this show. A core element of this season, as with previous seasons, is the exploration of Diane and BoJack’s relationship. Diane acts as BoJack’s moral compass throughout the show, bestowing accusations, as well as forgiveness. He regularly relies on her for advice, and later, when he doesn’t take it, for vindication. In this way Diane becomes somewhat less likeable, though never less sympathetic as she deals with the aftermath of her divorce throughout the season. Mr. Peanutbutter, too, comes to realize he has left his own trail of bitter women behind him—it is clear that his actions and life contain parallels to BoJack’s. Even Todd, ever the comic relief, continues to face complications from his asexuality: He breaks up with his asexual romantic girlfriend Yolanda Buenaventura, feeling that they don’t have enough in common.

Overall, the season is incredible, and complicated. It is a dark season, though with a somewhat uplifting ending (BoJack, with the help of Diane, checks himself into rehab). But questions arise from this season, questions about trauma, harassment, and abuse. It is possible the show goes too far, rendering itself close to unwatchable. It is entirely possible to come away from this season feeling that the show, in giving the spotlight to a character like BoJack, is doing exactly what it claims to be against: allowing men to get away with terrible things they’ve done. Yet the message may be more complicated than that. The season may be asking us not to forgive BoJack, but to allow him to heal. In any case, Season 5 is rich with dark humor and motifs—it is both overwhelmingly painful and absolutely mesmerizing to watch.