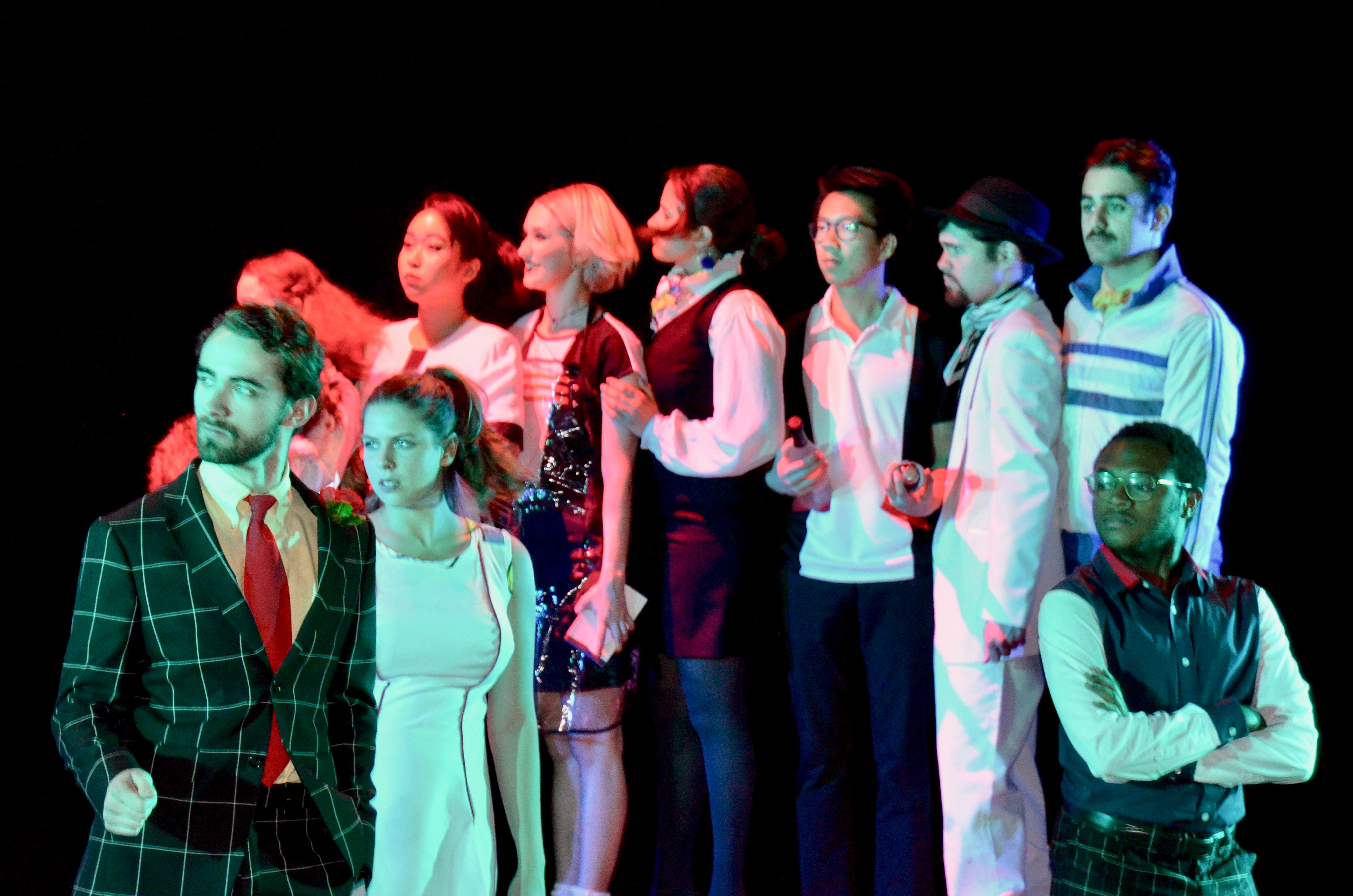 Theater often speaks to political reality, but few plays examine both politics and reality more overtly than “Rhinoceros.”  As if the text wasn’t confusing and disorienting enough, this Second Stage production uses lighting and sound that make the room feel like it’s spinning.

The play explores the spread of oppressive ideology in Paris using absurdism. A calm scene at a café is disrupted by a stampeding rhino. Shortly after another rhino charges by. The characters of the play then diverge into a heated discussion about whether there were two rhinos, or if the two charges were made by the same rhino. A significant portion of the play is dedicated to figuring whether the rhinos (or single rhino) was Asiatic or African. Words and their meanings deteriorate in front of the audience, which is sometimes maddening and other times nauseating. The play is a criticism of the spread of postmodernism and Marxism (which are fundamentally different). Characters transform into rhinoceroses after questioning the nature of morality, good and evil, or nature itself.

The closer the characters were to becoming rhinos, the more stylized their acting became. Many had cartoonish, exaggerated movements and patterns of speaking. Questioned about his friend turning into a rhinoceros, Jean (Andrew Dalton ’20) says, “Are you under the impression that our way of life is superior?” He shortly thereafter turns into a rhino. Another character, Botard (Dariush Yazdanpanah ’19), is a Marxist caricature that also falls to the way of the rhino. The message was that an investment in reality is necessary to prevent the spread of dangerous (in the opinion of the playwright Eugene Ionesco) ideology.

Director Jordan Tragash ’18 didn’t reference the specific ideologies that “Rhinoceros” targeted. Instead he found contemporary relevance in the swirling and confusing meaning of words.

“I think that Rhinoceros is a very political play in a lot of ways, when you consider when it was written, and why,” said Tragash. “But I think the thing that’s so special about it, and about all of Ionesco’s work, is how the absurdity makes the work very confusing. And I think that in our current state of the world, politics and the future are becoming more and more confusing for the average person. I think the beauty of the show is in how it captures that confusion and utilizes it to its advantage.” 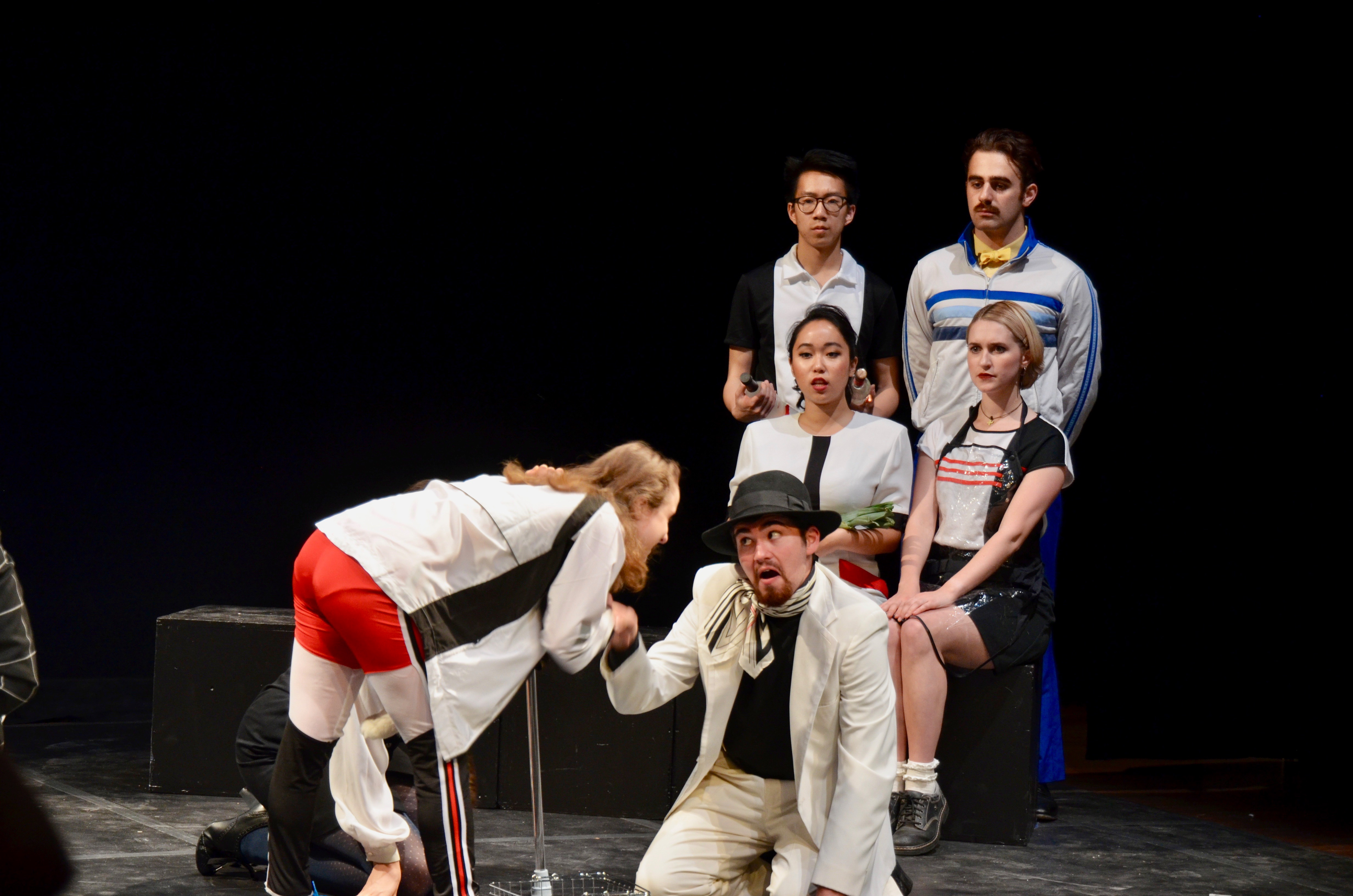 One moment in particular stuck with me. Lead character Berenger (Ariel Fromm ’21) bends out of their office window to look at a stomping rhino. The loudness of the sound conveyed the grand size of the animal while the pulsating light evoked a feeling of destruction. A greenish hue bounced of the face of Berenger representing their (and the audience’s) nausea.

“Yeah, we definitely went into it with the intention of making the audience uncomfortable,”  Tragash said. “I think the play itself is very weird, and I’m interested in the fear and the danger that the play discusses. So we tried to get some of that into the design concept.”

The cast of actors also helped this disorientation. Different conversations between characters would overlap at unusual points. Sometimes the audience had to swivel back and forth between different conversations happening simultaneously. Even worse, Fromm portrays Berenger realistically, but every other character acts more and more like caricatures. Sometimes the characters—like the housewife portrayed by Nicole Boyd ’18—are over the top to the point of hilarity. Other characters are maddening in their resistance to any semblance of reality. Tragash spoke about the acting of the play. 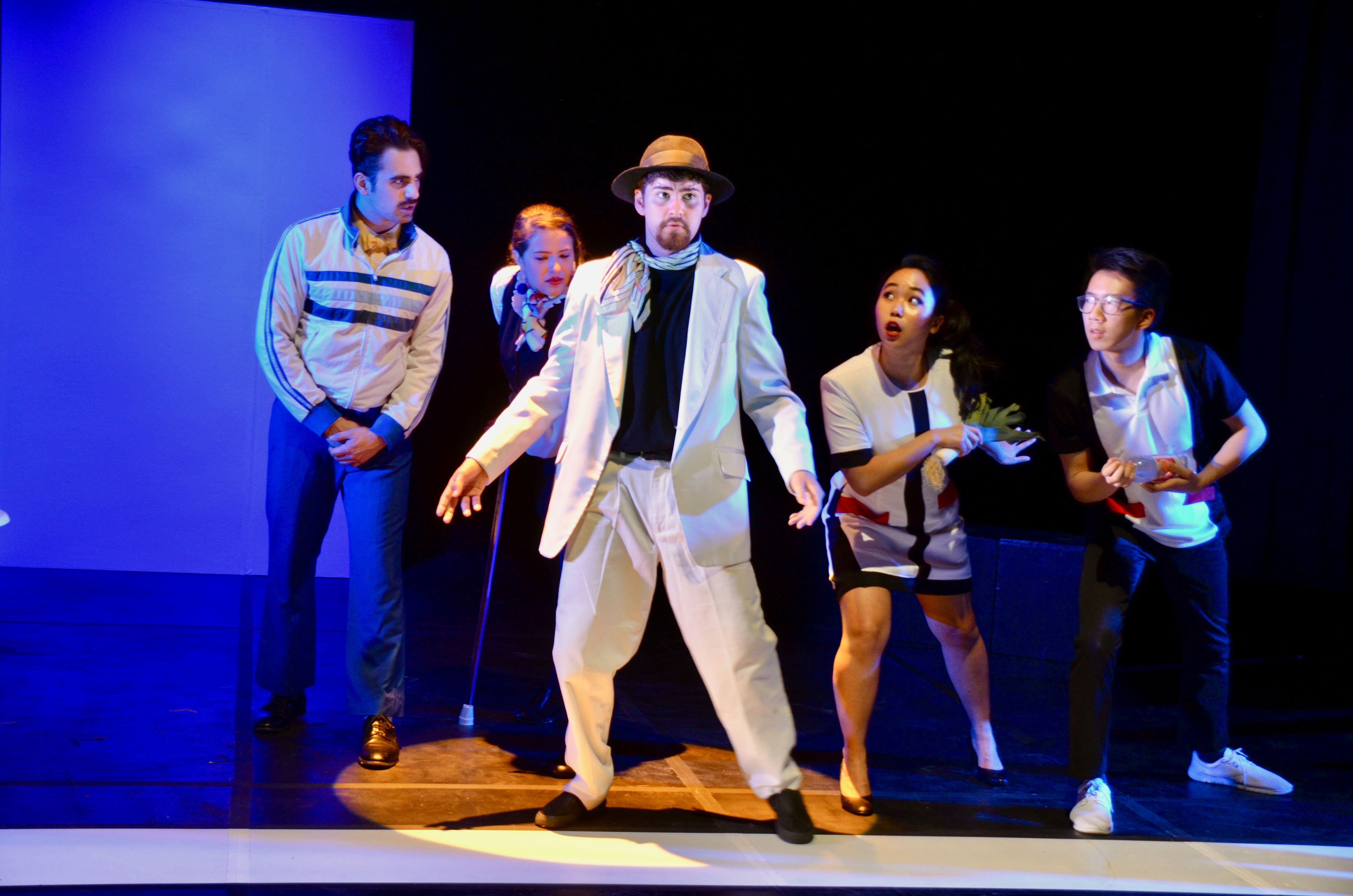 “I watched a lot of cartoons to get them to move and act in that way,” Tragash said. “We sort of discovered that different characters have different levels of stylization. For example, the Logician [Matthew Seidenfeld ’21] who gives the long speech at the end of [scene] one, is the most stylized character because he believes most deeply in the hyper logical world in which the play begins. Berenger, however, does not. And [their] sort of apathy and questioning of everything leaves [them] outside that world. And more of a character for the audience to relate too.”

Berenger, too, seems to lose their mind. The play ends with them questioning their reality. They learn that their reality is constituted in others; they ask if they are speaking English and cannot tell because there is no one to confirm their ideas. But it ends on a triumphant promise to turn the rhinos back to their human form. And perhaps that’s the big takeaway of the play: pursue what you think is right, even if you aren’t sure what is real.