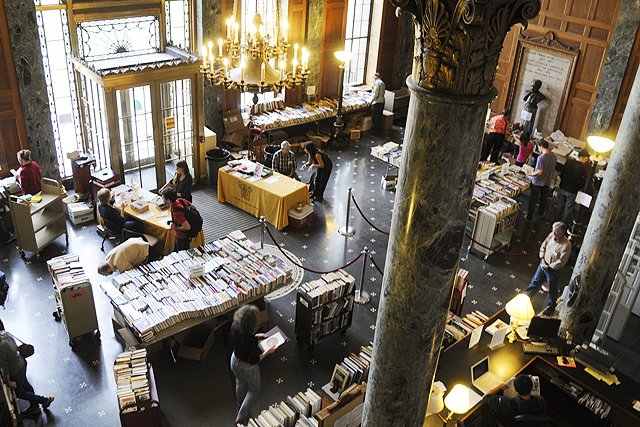 The University’s annual book sale outside Olin Library isn’t the most logical concept. They are, after all, selling old and generally torn-up used books while lending out nice new free ones 15 feet away. Nonetheless, I could walk those overflowing tables for hours.

I’ve always been obsessed with old books. It all began with an ancient bible that had once belonged to my grandfather and now rests on a bookshelf in my family’s living room. When nobody was around, I used to take it down and flip through the pages slowly. Then, if I heard someone coming, I would rush to place it back exactly how it had been. I never wanted to explain to anyone what I was doing.

To be clear, this had nothing to do the formation of a young budding Christian. Indeed, I had not a clue what all that smiting meant. (We were one of those pretend religious families). Rather, it had all to do with the King James’ smooth black leather and the soft crackling hiss made by flipping its impossibly thin pages.

Even now, the content of a book does not matter to me. When most people go to a book sale, they naturally look for works that they’ll find interesting, browsing by genre. For me, though, it’s not even that I’m concerned with what books I’m selecting. Instead, I’m literally judging them based on the cover, or, when they’re shelved neatly, just the spine. I don’t mean this ironically. The cover gives clues to where, when, and how the book has traveled. I want a text that’s well worn, that has coffee or tea stains. Is a piece of the cover missing? There’s probably a story there.

This year’s finds include a beautifully bound copy of Washington Irving’s “The Life and Voyages of Christopher”; an illustrated version of Dickens’ “A Tale of Two Cities”; and a second edition of Juan Valera’s “Pepita Jiménez,” which the inside cover informs was published in 1875 in Madrid. The latter is held loosely together between green marbled hardcover and was checked out only once during its time at Olin Library.

None of these, however, compare to the real gem of this year’s sale: a light-green hardcover titled “The Works of Christopher Marlowe.” Of course, its contents mean nothing to me. I’ll probably never read more than the title. What really interests me about this particular one is the past owner. I have found one of their letters tucked under the book’s crumbling cover. It is written in a nearly inscrutable cursive on stationery stating it’s from Puerto Rico. Between rambling about some friend’s vacation to St. Croix, the writer sends a message from the Kennedy’s. An unexplained acronym, M.M., has sent “a beautiful word” from the White House.

The letter writer also references their recent meeting with Juan Bosch, who was a leading politician from the Dominican Republic. At the time, Bosch was exiled from the Dominican Republic by the authoritarian Trujillo regime. He would later become the first democratically elected leader of the country after dictator Trujillo was assassinated. The details of this meeting and the word from the Kennedy’s all remain provocatively hazy. The writer seems aware of this lack of clarity. “This is a rather witless letter,” they sign off.

Notes like this are my ultimate goal whenever I’m browsing an old book sale. It started when I was cleaning out the storage area of family home’s basement and found an antique copy of the Harvard Classics series—a collection that included works spanning from Plato to Chaucer to Whitman. A permanent dust had been caked onto their hard, green covers.

In one item in the collection, a copy of Richard Henry Dana Jr.’s early 19th-century maritime narrative ‘Two Years Before the Mast and 24 Years After,” I noticed a small slit of paper poking out. It was a fully labeled diagram of a ship Dana describes in the text. On the back of the note, there was a long letter describing how Dana’s book so accurately portrayed the reader’s own experience out at sea.

As I would later learn from my great uncle Bart, the writer of that note was my great-grandfather, who had sailed out of Annapolis on an old-fashioned rig in the 1920s. On learning this, I was so excited that I actually read Dana’s book. I don’t think I would have ever got through it without the notes of my nautical ancestor explaining what a flying-jib-boom, yard-arms, and a cock-a-bill are.

Later, when I was exploring the collection further, I discovered that my great-grandfather was not the only one to scribble in its pages. As my uncle Bart explained (later confirmed by my grandmother), the books at some point fell into the hands of my great uncle John Fleming who had been a taxi driver in New York City. According to a note he left in the book on Plato, he had endeavored to read the collection—the English Canon, that is—in the last years of his life. Judging by his notes, he seemed to be a particular fan of the poetry of John Keats.

When I consider how many books must hold such stories, leaving a book sale with the depth and variety of Olin’s seems impossible. It’s almost as though new books are constantly appearing, each one telling its own story of a past owner. As I circle the table’s endlessly, I constantly ask, what was it that made someone buy a copy of Virginia Woolf’s “Mrs. Dalloway” or Albert Camus’ “Candide”? What were they looking for?