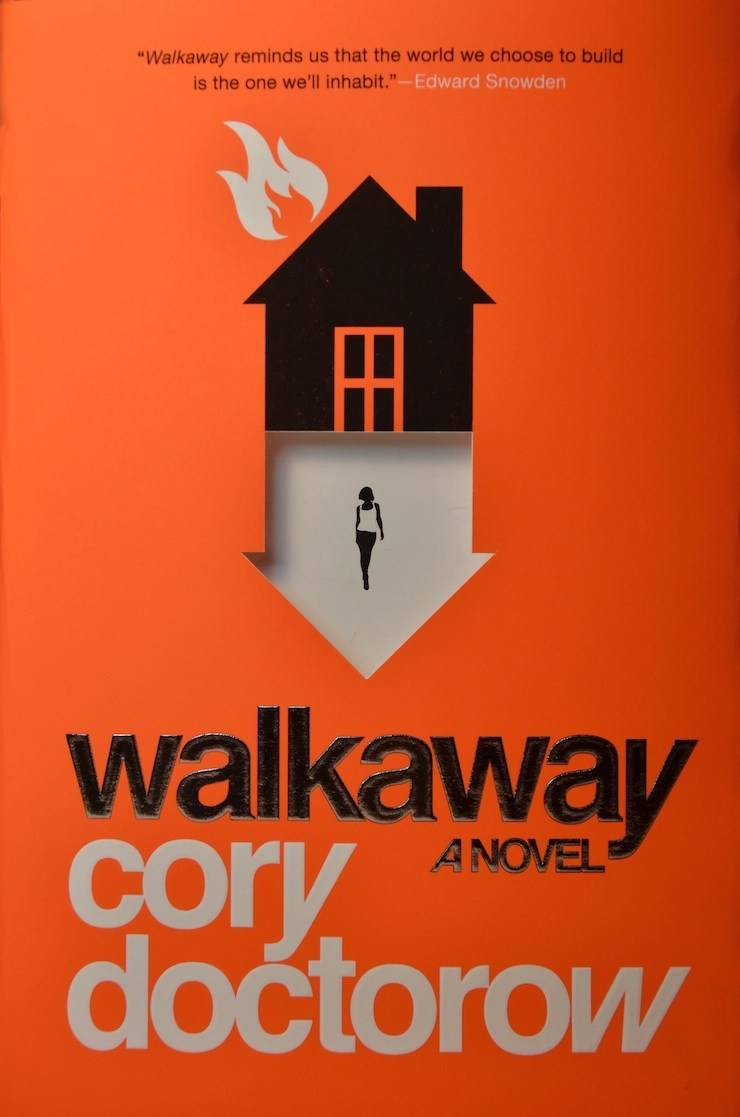 Modern sci-fi and dystopian novelist Cory Doctorow’s most recent book, “Walkaway,” opens with beer made from reclaimed urine at a Marx-themed party and ends with programmed simulations of human consciousness waking up in newly manufactured bodies. The novel, needless to say, is kind of insane.

Generally speaking, my feelings about the novel are these: While it’s not my favorite science fiction book of all time, “Walkaway” is both interesting and topical enough to make it worth reading. Plus, it manages to refrain from sinking into the collective pit of despair to which most modern dystopian novels have fallen by offering a potentially hopeful outlook on our future. Which, in my opinion, is always a good thing.

Taking place in Canada around the year 2070, “Walkaway,” published in April of this year, is set in a future society very much based on elements of today. A relative of 3D-printing technology has become ubiquitous and easy to use, so food, clothing, and shelter are easily manufactured from designs passed around on the free web. Climate change has utterly destroyed the environment, but people seem largely unconcerned, as humans have escaped the brunt of the effects through technological means. The nations are run by oligarch zillionaires known as “Zottas.” I say zillionaires because, by this time, currency has become so inflated that million-dollar bills are essentially loose change. Though my description is closer to a back-cover summary than the intricacies of the actual novel, I think it gives an accurate sense of the novel’s setting as a whole—a setting that feels both futuristic and profoundly contemporary.

Like other Doctorow novels, “Walkaway” is technologically oriented, bearing cutting messages against governmental control and the 1 percent, as well as a focus on the ability of the underdog to fight against massive institutions. It stars a variety of eclectic and diverse characters but focuses mainly on three: Natalie Redwater, Hubert “Etcetera” Espinoza, and Seth. The three decide that they are done with the post-scarcity world of oligarchical meritocracy. Natalie, whose father is a zillionaire, has spent her whole life being watched by her dad via various means of spy technology. Seth and Etcetera simply don’t have much to keep them there. So the three decide to do something they’d only read about in the most obscure pages of the Dark Web: walk away.

It’s a bigger deal than it seems. To walk away (or become a “Walkaway”) is to renounce Default, the term for ordinary society, and delve into the radical fringe non-societies made up of the world’s weirdest (and, obviously, greatest) people. The “Walkaway-verse” is a communist-anarchist world of self-sufficiency and gifts, without money, hierarchy, or debt. It is, I think, Doctorow’s envisioned utopia-within-a-dystopia. By providing us with both a default capitalistic meritocracy and an anarchist non-society (which is redundant, I know), Doctorow provides a glimpse into two different futures—one an antidote to the other.

Doctorow imagines a world in which a person’s worth is based not on how much money they make or even how skilled they are at one particular job or another. The system (or lack thereof) means people contribute to small communities for the sake of contributing and take when they need something, but people who take more than they give or vice versa are neither rewarded nor punished. Because the world exists mostly in a world where scarcity is no longer a possibility, there isn’t really a need to worry whether a person is using too much of a resource. More can always be made.

This is better explained by Limpopo, another character in the novel: “Asking someone if you can pitch in is telling them that they’re in charge and deferring to their authority. Both are verboten. If you want to work, do something. If it’s not helpful, maybe I’ll undo it later, or talk it over with you, or let it slide. It’s passive aggressive, but that’s walkaways. It’s not like there’s any hurry.”

So Etcetera, Natalie, and Seth enter the world of Walkaway and come upon a B&B, where they take on new names and job titles. They slowly become a part of the Walkaway world, and when the theft of everything they own teaches them to let go of possessions (not exactly the way John Lennon might have wanted, but we can applaud them anyway), they come to find value in working hard. They also find value in pure carnal pleasures like drugs and sex. They all have a lot of sex. It’s one of the novel’s highlights.

The most interesting part of the book, in my opinion, regards the research some Walkaways conduct over the course of the novel on living forever. Essentially, a group of scientist Walkaways figure out how to create a simulation mapped from a person’s brain, and can run it as a program on a computer. This simulation is, basically, a person’s consciousness. “Sims,” as they are called, are considered by the Walkaways to be alive. Not only that, they are considered to be the same person as the brain they copy, and perhaps the continued experience of that person. It’s called “the key to living forever,” and it’s coveted within the Walkaway-verse. The sims can interact with people, program themselves, and are in all ways human, except the ones that require a body. Thus, the very definition of humanity is tested.

The first-ever simulation to be successful is named Dis. In the novel, the simulated Dis explains how being a simulation means changing her parameters, so that the sim doesn’t have an existential meltdown about not having a body. This means the sim has a different programmed makeup than the mental makeup of the person the sim is meant to replicate. Here’s a quote from Dis on the subject.

“Think of it—when we’re booting a sim like me, it starts off primitive, and we can look ahead at low compute-cost to figure out parameters for each successive step to full consciousness…Or whatever I have,” Dis says. “One of the key questions each of those lookahead versions of me is being asked is, ‘Will you have an existential crisis when you realize that you’re a simulation?’ The possible ‘me’s’ with highest tolerance for being a head-in-a-jar have the best fitness factors for fully spawning.’”

To me, this is both the most interesting idea and the most flawed. While I’ve never been one to dispute the potential idea of artificial intelligence (I freaking loved “Westworld”), I don’t think the sims are the same beings as the humans they map. The reason is this: a map of a brain is not physically the brain itself, and therefore won’t have a continued experience as the original brain. If you cloned a sheep, and then took the sheep clone to a grassy field and left the original in a lab, you would never say that the original sheep was experiencing the grassy field. That’s not to say that the clone isn’t its own entity that can experience the grassy field for itself—it’s just that its own experience now differs from the original sheep’s. In the same way, you wouldn’t say the original brain is literally the exact same object as its cloned/programmed/mapped version. So the idea of the sims being the key to living forever is simply inaccurate: the beings the sims map are not living forever. The exact replica is.

Yet that seems to be exactly what Walkaways believe. To them, becoming an uploaded conscious being that dwells in the corners of the Internet is the ultimate way to walk away. So much of this novel is a love letter to technology that it made me simultaneously want to become a computer science major and throw my iPhone into a ditch.

The last thing I’ll mention is the relevance of “Walkaway” across the board in terms of the cultural issues of today. Rather than sticking with just science, politics, and technology, Doctorow touches on themes of social justice in ways that are at once defined, subtle, and sincere. Natalie Redwater, who is essentially the 1 percent of the 1 percent, spends much of the novel grappling with her extreme privilege, and it’s a topic of conversation between characters in a way that is confrontational without being aggressive. Seth, who is black, spends moments in the book deliberating how best to bring up race in conversation with the people around him. Characters playing large roles and small are diverse in terms of gender, ethnicity, race, age, and ability.

Thus, it is the relevance of this novel, its strain of hopefulness via Doctorow’s envisioned Walkaway-verse, and the vibrant characters, that make it worth reading. It may not be the most poignant or biting sci-fi dystopian story that I have ever read, but perhaps it offers more than that, through its topicality and elements of classic sci-fi. That, I think, is what makes it worth a trip to your local bookstore—or at least an illegal download.