Students and Locals Protest Against DAPL at Wells Fargo 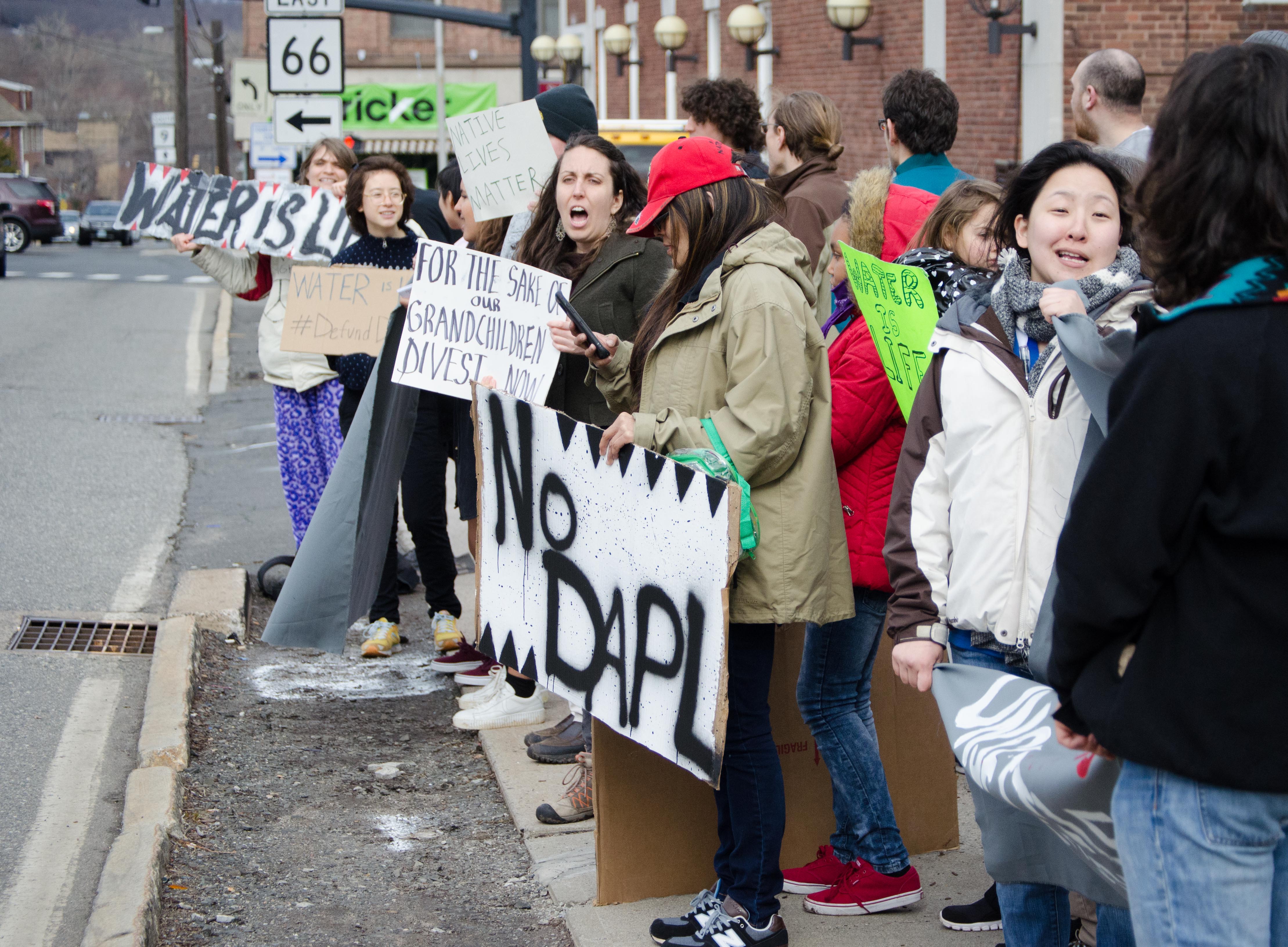 On Friday, University students joined forces with local residents to protest at the Middletown Wells Fargo branch with the objective of getting Wells Fargo to stop funding the Dakota Access Pipeline (DAPL) project.

According to the Facebook event, the project threatens the land, water, and sovereignty of the Standing Rock Sioux and surrounding indigenous communities in North Dakota.

“We’re in solidarity with groups such as Red Warrior Society and other water protectors and indigenous warriors who have been taking direct action to block the DAPL and other fossil fuel infrastructure,” the Facebook description read. “They have faced dogs, pepper spray, and imprisonment while struggling against ecological chaos and colonial violence.”

Angel Martin ’19 was one of the many people at the protest. As a member of both the Wesleyan Coalition for Divestment and Transparency and Wesleyan Students Against the Fossil Fuel Industry, Martin helped spread the word about the protest after the two groups she is a part of were contacted by the Dragonfly Climate Collective.

Martin took part in the protest for a number of reasons, including her desire to show solidarity with water protectors resisting DAPL and to support indigenous sovereignty and native lives.

“Settler colonialism is a structure that has displaced Native Americans from their land for hundreds of years and the Dakota Access Pipeline is another violent colonial project endorsed by the United States government,” Martin wrote in an email to The Argus. “…Wells Fargo and banks alike fund genocide and I want to stand up against that. Additionally, the illegal occupation of land is something we can see across the world from Standing Rock, to Hawaii, from Palestine, to Middletown. All of these issues are related and as a settler, I am implicated in them as much as a corporation like Wells Fargo is.”

The protest even drew residents from surrounding towns. Sandra Olsen came from Haddam Neck, hoping that her participation would help different establishments with money invested in the oil industry realize the importance of a renewable future. She pointed out that though a renewable future would require subsidies, our present situation does too.

“The oil industry gets incredible subsidies, and people don’t realize that they don’t do all this and get rich on their own,” Olsen said. “The government is subsidizing the oil industry too, oil and gas, pipelines, all of that. Customers are paying for that. They’re not just doing it out of the goodness of their heart to keep fuel in our tanks so that we can drive our cars and maintain our way of life. They’re subsidized too.” 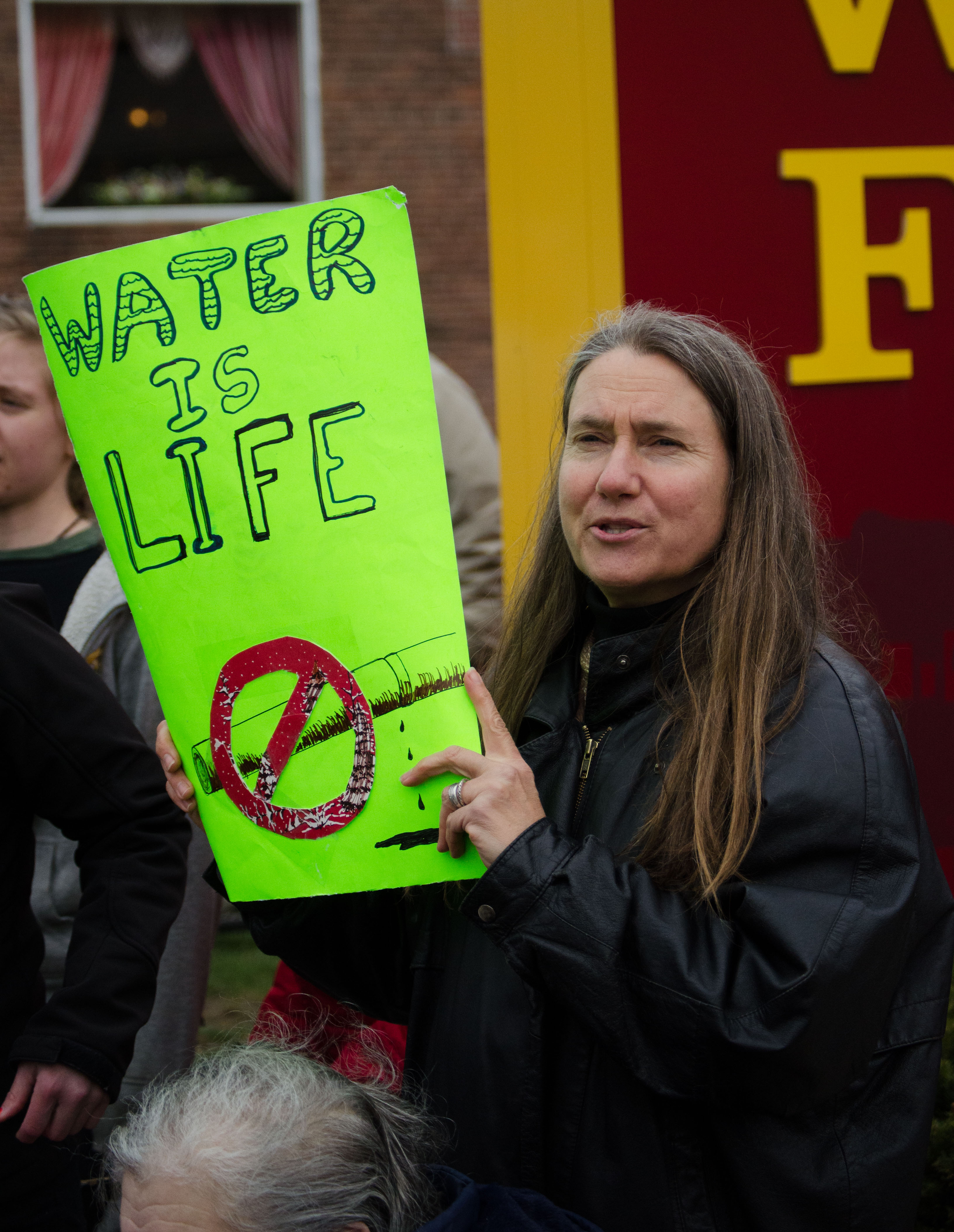 Collectively, the group of students and residents managed to disrupt business at the branch between 3:30 and 5:00 p.m. The branch was actually shut down early as a result of the protest, and the message of the protest was certainly spread to those driving by the bank.

“There is always a chance that [a] public act of protest in itself can spread awareness,” Martin wrote. “Even beyond that, Wells Fargo is a symbol of capitalism and settler colonialism and I also think that is why [it] was important. Personally, my favorite part was singing different protest songs especially when we were blocking the ATM…I really do believe that people have the power, and singing in community reminded me of this feeling.”

One of the more prominent parts of the protest was 77-year-old Vic Lancia, who blocked the entrance to the bank starting around 3 p.m. with his body. He sat on the sidewalk directly in front of the door with his arms inside tubes within two garbage bins filled with sand and large rocks. When asked about his predicament, Lancia said that though his hands were locked in the trashcans, he could unlock them from the inside.

“I’m doing it for the animals,” Lancia said. “If we are destroyed as a species we’re going to be taking a lot of other species down with us. We have no respect for life. There is no reverence for life. We have forgotten about it completely, all for the almighty dollar…I’m getting sick and tired of it. From destroying public schools to destroying all of our public services, not the least of which are the protection of the environment that we live and the respect for mother nature.”

A student brought over a microphone for Lancia to speak into, and he delivered, talking about how the current administration is trying to destroy the Environmental Protection Agency.

Lancia commented on how he found out about the protest. 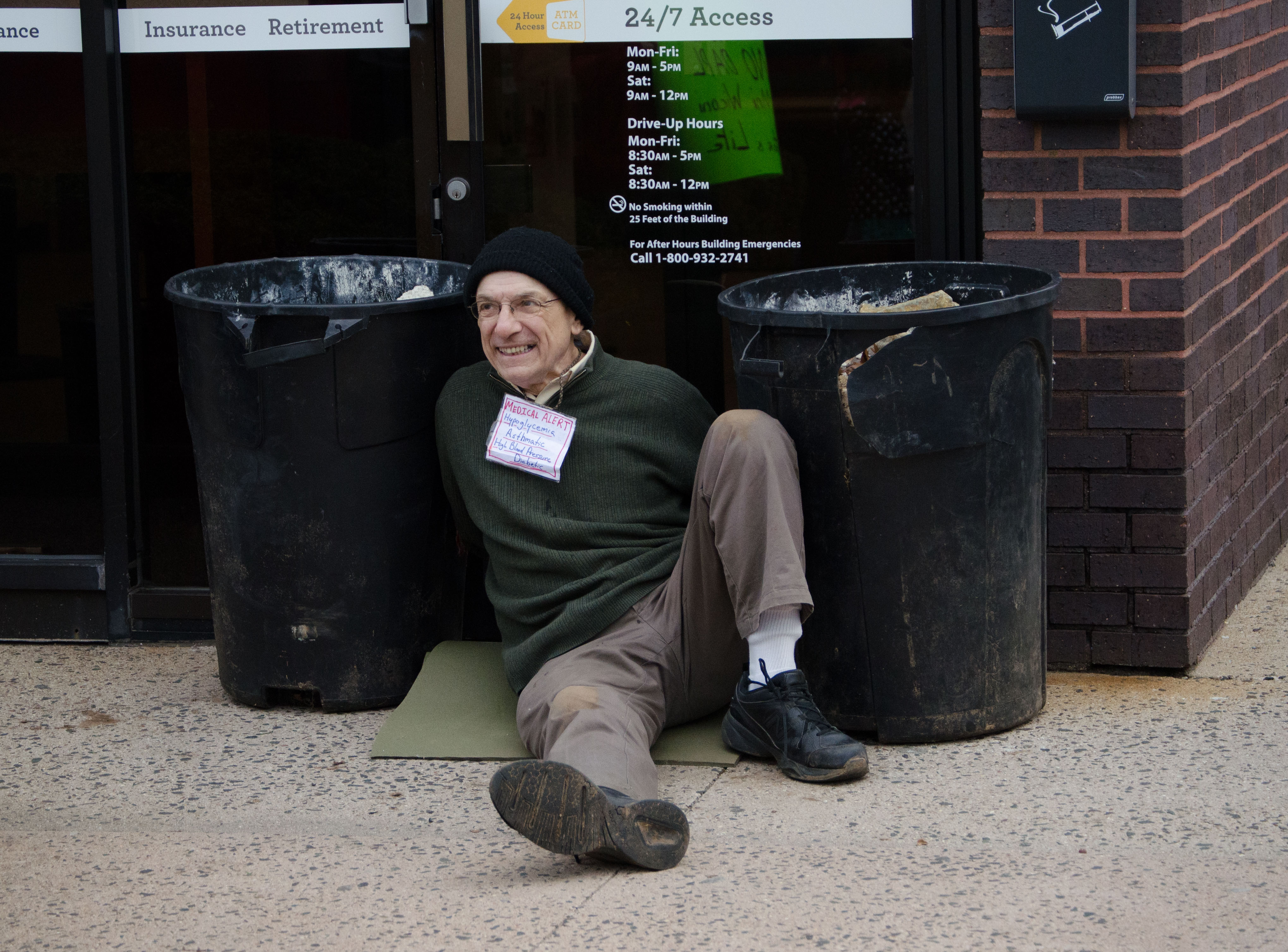 “I try to stay aware,” Lancia said. “I try to keep up with what’s going on because I’m not apathetic. I refuse to be apathetic. [This] is my way of connecting with the community. Like I said, it beats sitting around in a nursing home waiting to die.”

Despite the success of Friday’s protest, demonstrators believe this is one step of many that need to be taken in order to get companies like Wells Fargo to stop funding DAPL and to raise awareness for the harm being done inflicted upon the environment.