“The Sopranos”: How a Psychiatric Narrative Made TV’s Golden Age 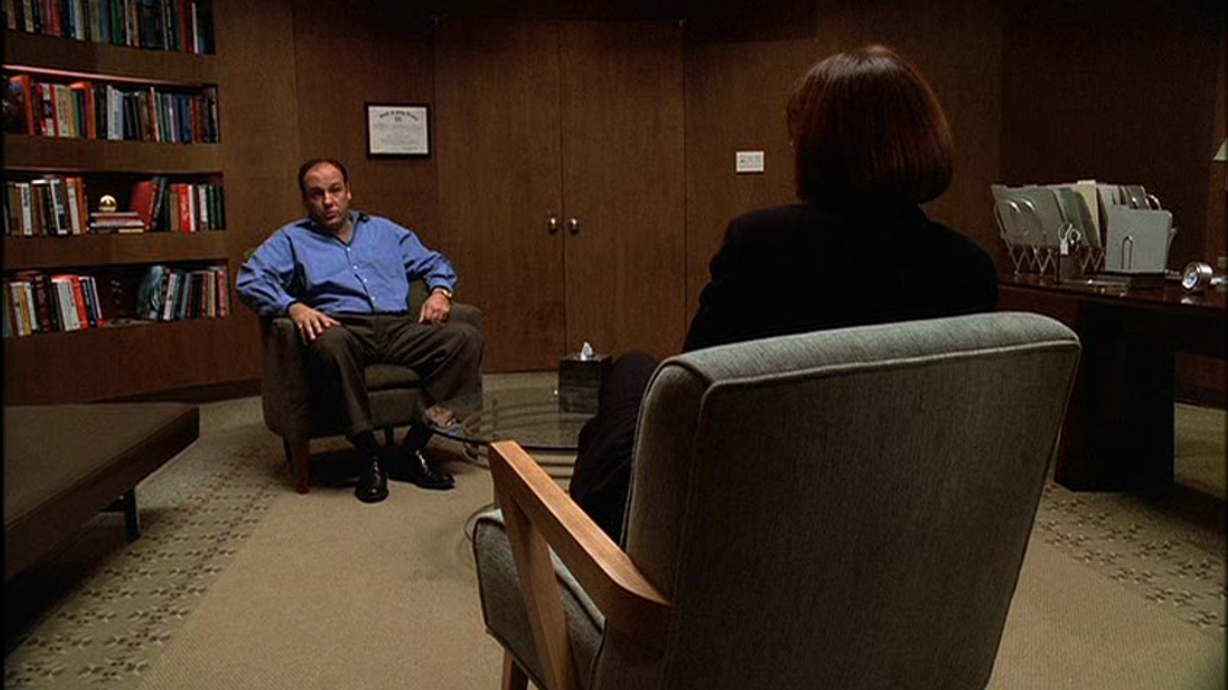 Television’s “Golden Age”—perhaps at its apex today with shows such as “Mad Men,” “Breaking Bad,” “House of Cards,” “Game of Thrones,” and “Mr. Robot” gaining more critical acclaim than most feature films—would not exist were it not for a bold HBO series whose narrative structure centered around a mob boss in therapy for depression and crippling anxiety. David Chase’s “The Sopranos” innovated the genre of television so much that we take it for granted, but it also captures an important moment in American psychology that is worth reexamining today.

The constant pathology of behavior in “The Sopranos” lends the show much of its realism, yet it dually functions as one of the show’s strongest critiques of contemporary American society. From Season 1 to 6, there is almost always a medical reason that explains the abnormal behavior in the show, and some of the main characters go through extensive battles and treatment with mental illnesses like depression, anxiety, and addiction.

Set in suburban New Jersey near Montclair, “The Sopranos” follows the leader of a major mafia family controlling North Jersey with a strong affiliation to one of the infamous New York Five Families. Critical acclaim for the show often relied upon testimony from FBI agents and ex-mobsters who attested to its resemblance to modern organized crime in ways that surpassed canonical mob flicks like “The Godfather” and “Goodfellas,” the latter of which shares several actors with “The Sopranos,” most notably Lorraine Bracco (Karen Hill, Dr. Jennifer Melfi), Tony Sirico (Tony Stacks, Paul “Paulie Walnuts” Gualtieri), and Michale Imperioli (Michael “Spider” Gianco, Christopher Moltisanti).

The show’s hero, Tony Soprano (James Gandolfini), is introduced in the show’s opening credits sequence in the driver’s seat of an SUV driving through the Lincoln Tunnel from Manhattan to New Jersey, slowly toking away at a cigar to the song “Woke Up This Morning [Bought Yourself a Gun].” While Tony may look tough and intimidating rolling through the Jersey Turnpike, the pilot episode itself begins with him in the waiting room for a therapy session, pondering the significance of a femme fatale sculpture in front of him. 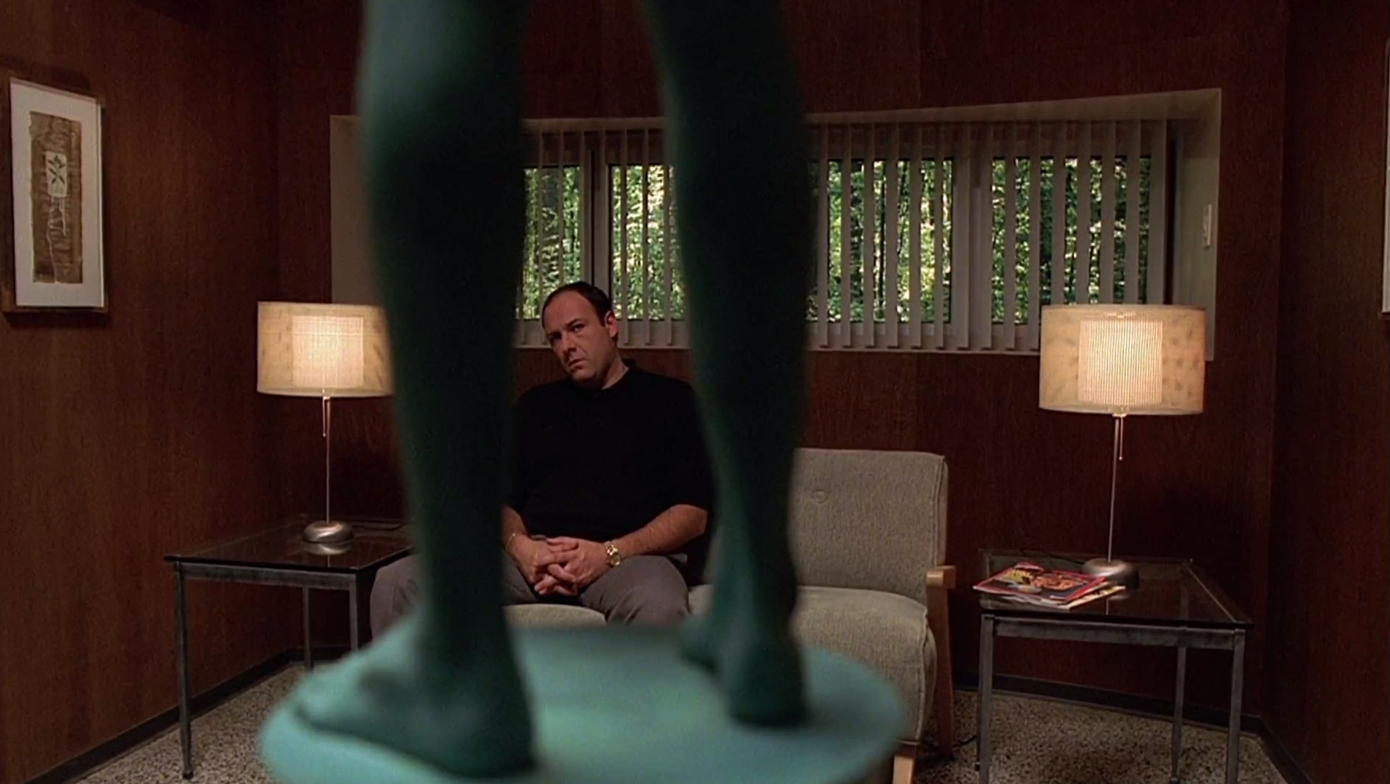 While Tony still carries a heavy stigma of mental illness with him, he nonetheless finds himself in therapy because his anxiety attacks—which are rather severe and render him temporarily unconscious—have prevented him from being an effective mobster, much less a husband and father. Complicating matters for the hyper-masculine Soprano is his attraction to his therapist, Dr. Melfi (Bracco), who though fully aware of the natural phenomenon of transference, is allured by the opportunity to treat a dangerous organized crime leader, and her fascination and excitement overshadow the risk. In a fascinating parallel narrative, Melfi’s feelings toward Tony are fleshed out in her own therapy sessions with a colleague.

For viewers in the late 90s and early aughts, “The Sopranos” was the closest they had ever come to seeing modern psychology up close, unless they were a part of the one fifth of Americans who took some sort of psychiatric medication. Melfi’s choice for Tony is Prozac, a careful choice by David Chase. Prozac experienced a meteoric rise in American culture, becoming synonymous with depression, perceived chemical solutions for happiness, and the field of psychiatry itself. There was even a psychiatric memoir called “Prozac Nation,” written by Elizabeth Wurtzel in 1994, later adapted into a film in 2001. However, “The Sopranos” does not uniquely examine the chemical side of psychology.

Tony’s relationship with his mother comes under increased scrutiny during his sessions with Dr. Melfi, who blends a Freudian approach to psychoanalysis with a modern understanding of brain chemistry. Much of this pushes beyond the semi-autobiographical for Chase, who revealed in a 2007 interview with Vanity Fair that he modeled Tony’s mother after his own. Neurotic, manipulative, and at times ruthless, Livia Soprano (Nancy Marchand) exerts immense influence over Tony, even posthumously. Flashbacks to her treatment of her son also allow the show to experiment with the juxtaposition of two different Americas, that of the nostalgic 1950s and the uncertain paranoia of the turn of the century.

Although most Americans don’t know a mobster, “The Sopranos” is able to make a powerful, non-didactic commentary on American life by distilling our deepest desires and insecurities in a character model that is often obfuscated and revered in shallow hyper-masculinity. By inverting the canonical notion of the mob boss, Chase suddenly gives his viewers a view of the underbelly of American society. The middle class and working poor anxieties of Tony’s made men, foot soldiers, and their families are different to the body politic’s only in source of income.

Yet the most profound influence of “The Sopranos” is its integral use of mental illness within the narrative. Tony’s therapy sessions with Dr. Melfi function nearly in the way soliloquies do in Shakespeare.

Nonetheless, “The Sopranos” is a show worth re-examining or even discovering if one is so lucky. Subsequent shows like “Mad Men,” “Breaking Bad,” and even more abstract shows that focus more heavily on mental illness like “BoJack Horseman” all owe their success to the bold innovation of David Chase. Every Golden Age needs a first coat of paint, and few are worth scraping away at more than that of “The Sopranos.”