History is a Weapon: Slavery Reincarnate/Familiarity

The president-elect campaigned on state-sanctioned bigotry and violence. Among other places, we see this in his calls for “law and order” in inner cities and support for stop-and-frisk policing tactics, both of which are racist.

In 2011, the year that New York City had its highest levels of stop-and-frisk activity, 685,724 people were stopped by New York City police. Eighty-seven percent of all people stopped were Black or Latino. Eighty-eight percent of all people stopped were completely innocent. Law enforcement’s harassment of people of color is racist and unjustified, and contributes to the criminalization of Black and Brown personhood, making Black and Hispanic people 59 percent of the national prison population despite making up just 29 percent of the national population.

Now is a good time to remind you that the 13th Amendment outlaws slavery except “as a punishment for crime.”

GEO and Corrections Corporation of America, the two largest for-profit prison companies in the nation, garner $3.3 billion in annual revenue.

They are part of the behemoth that is the prison-industrial complex, a structure that is in part fueled by the War on Drugs started by President Richard Nixon in the 1970s and expanded by President Ronald Reagan in the ’80s. This war, still being waged today, incarcerates Black people for drug offenses at 10 times the rate of white people in spite of equal rates of drug use.

In a sentence, the United States government criminalized drug use and distribution, used that criminalization to disproportionately incarcerate Black and Brown people, and turned them into a steady source of corporate profit and low-cost labor. The president-elect has pledged to “bring back” the law and order that is already responsible for a 500 percent increase in the country’s prison population over the last 40 years that has had no meaningful impact on crime rates. Law and order is slavery by another name. Still, all of this is possible under democracy.

In his speech announcing his presidential candidacy, the president-elect famously said that immigrants from Mexico are not its “best” people. He said that “they’re bringing drugs. They’re bringing crime. They’re rapists. And some, I assume, are good people,” he conceded.

On the campaign trail, he promised to “round up” and deport 11 million undocumented immigrants. Since winning the election, he has doubled-down on his commitment to deport or incarcerate up to three million immigrants once he takes office.

He also campaigned on a promise to institute a “total and complete shutdown of Muslims entering the United States,” floated the possibility of creating a registry of Muslims in the United States, and has suggested that the government should surveil Muslims and mosques. He has also said that he thinks that “Islam hates us,” conflating jihadism with Islam in general.

Blaming undocumented immigrants and Muslims for unspeakable crimes and violence is not just bigoted rhetoric; it’s hateful and dishonest propaganda. The president-elect is planting seeds and growing hatred by fanning the flames of fear and ignorance. All of this should sound familiar.

He has been inciting violence, harking back to the “good old days,” building his supporters to an angry fervor at rallies, fueling hatred for racial, ethnic, and religious groups, advocating distrust of anyone who opposes him, threatening to jail his political opponents, and using a simple, thinly veiled slogan: “make america great again.” At best, he is a hot-air spewing, white nationalist demagogue. At worst, he is a dangerous fascist. All of this should sound familiar. 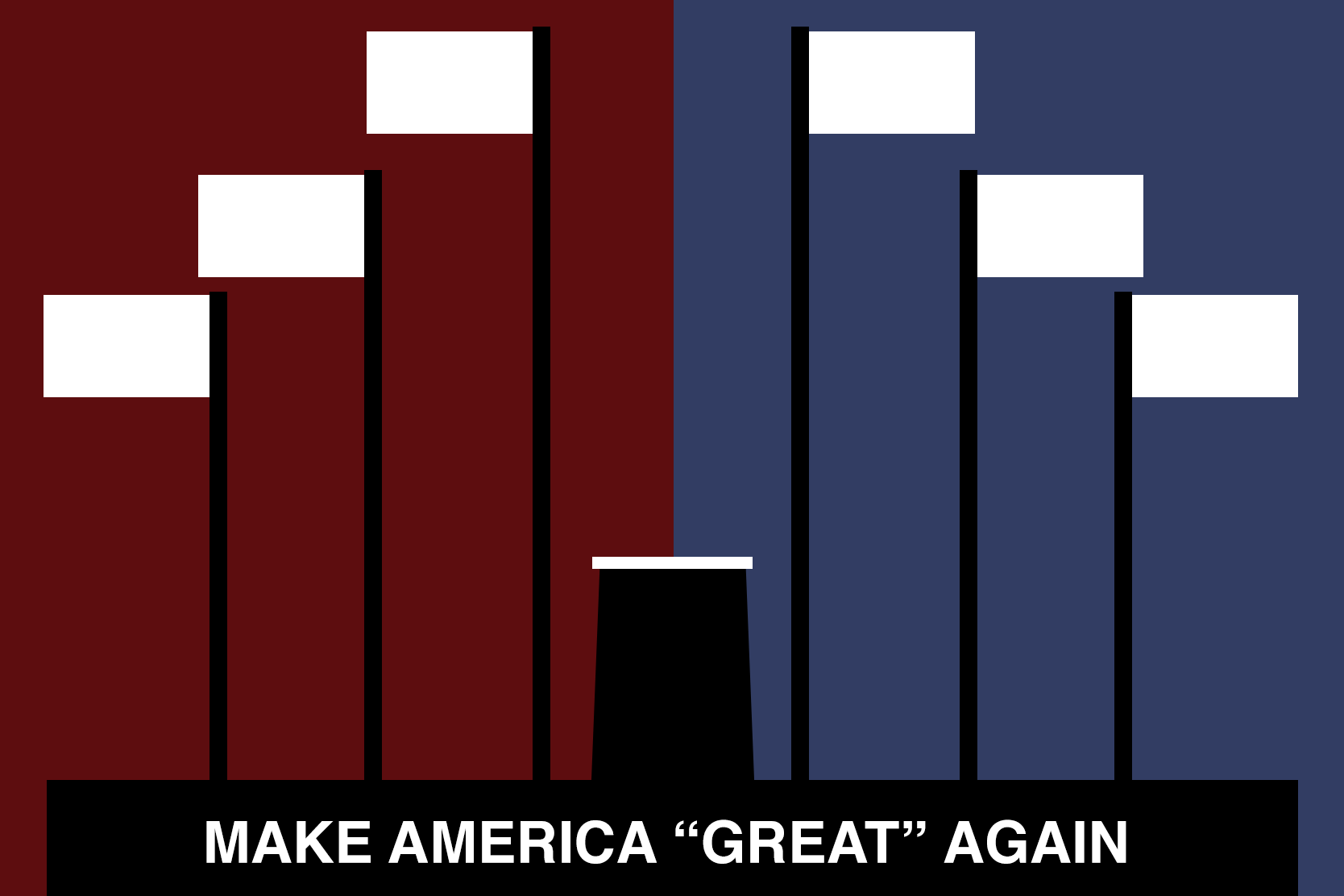 In 1922, The New York Times cited “several reliable, well-informed sources” who “confirmed the idea that Hitler’s anti-Semitism was not so genuine or violent as it sounded, and that he was merely using anti-Semitic propaganda as a bait to catch masses of followers and keep them aroused” while covering the rise of the Nazi movement in Bavaria and elsewhere in Germany. Doubt towards the seriousness of Hitler’s bigotry allowed the rise of his violent and genocidal regime. To echo the words of many who came before me, never again.

The human rights violations the president-elect has advocated for, including torturing captives, surveillance of Muslims, extrajudicial killings of the families of suspected terrorists, denial of due process and equal protection for undocumented immigrants, and racial profiling, are cause for alarm on their own. Coupled with his pointed anti-Muslim, anti-immigrant, and even anti-journalist propaganda, which threatens institutions uniquely capable of holding his power to account, the president-elect must be closely watched, and his message must be denounced.

In a sentence, to be silent in the face of outspoken white supremacy and patriarchy is to consent to its rise and its work. To be silent is to be complicit, whether it be to your benefit or your detriment. Though some find solace in the fact that perhaps not all of the president-elect’s supporters can be misogynists and racists, I do not. I will not undertake the burdensome task of discerning between white nationalists and those who voted one into office; I am not sure that the distinction is necessary.

If, still, there is any doubt that the incoming administration, a Republican Congress, and the conservative Supreme Court that they will bring will further the interests of white male supremacy at the expense of subjects of historical bigotry, know that the president-elect appointed Steve Bannon as his campaign chairman when he was running, and has recently named him chief White House strategist. Bannon is the founder of an online media company established as a “platform for the alt-right.” This is nothing short of deeply troubling.

According to the Southern Poverty Law Center, the alt-right, formally the alternative right, refers to a far-right ideology “centered on ‘white identity’ and the preservation of ‘Western civilization.’” The term itself was coined by the head of the National Policy Institute, a white nationalist think tank. Furthermore, the alternative right’s “adherents stridently reject egalitarianism and universalism” in favor of things like scientific racism and traditionalism.

By aligning himself with and establishing a platform for this ideology, Bannon has effectively made himself its champion. By appointing him chief strategist, the president-elect has demonstrated to all of us that the alt-right has a powerful place in his White House. A proud white nationalist and occasional anti-Semite in the White House: This is what democracy looks like. If you are wondering why you are surrounded by anger and mourning, wonder no more.

The history of racial and ethnic scapegoating and nationalistic purification cannot go overlooked when appraising the incoming administration and its implications. To be silent could be an error as grave as that of those who did not speak out against anti-Semitism in the mid-20th century. It is possible, and it would be reassuring, to think that the president-elect’s role in bringing white supremacy out from the shadows was simply overlooked by those who voted for him—it is safer to assume the opposite.