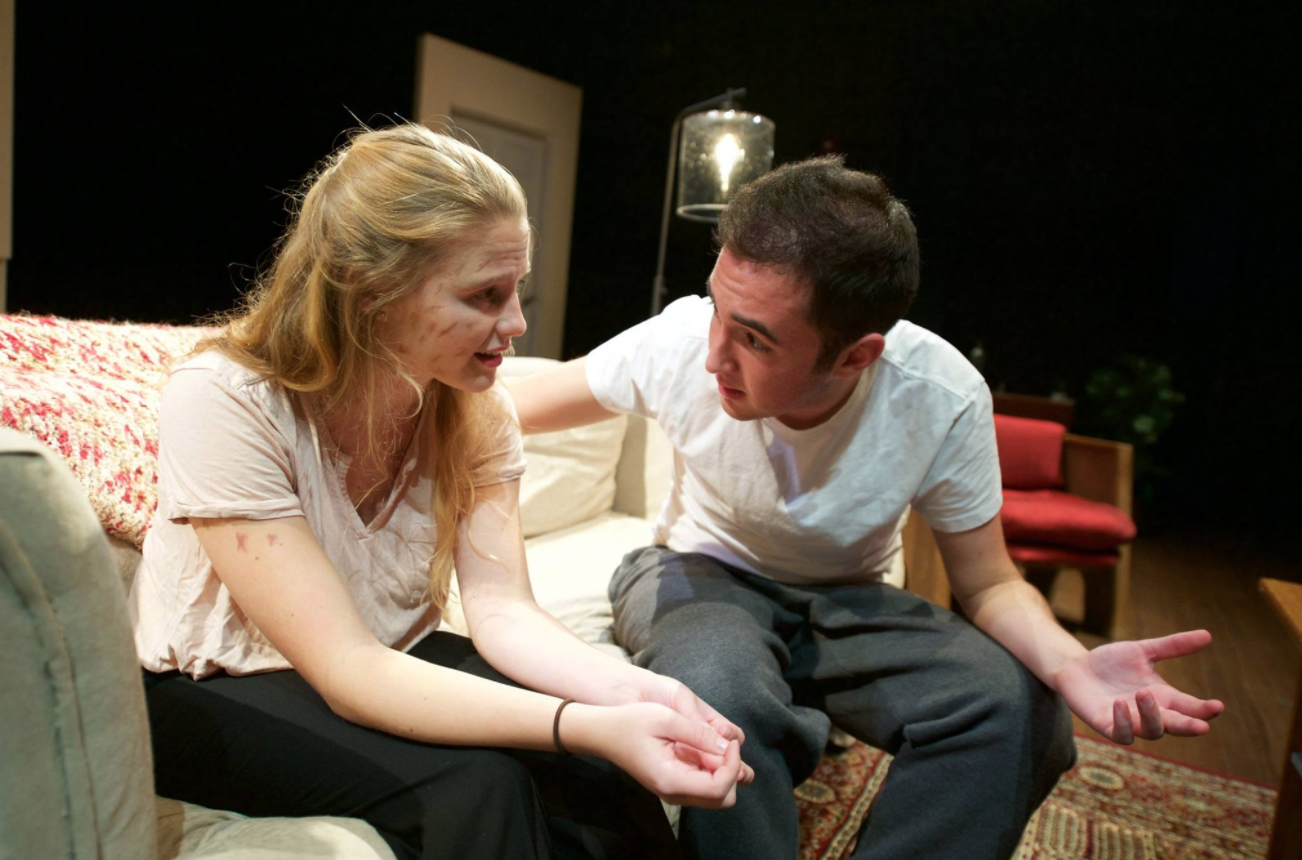 For a little under two hours, “Time Stands Still” offers a lingering glance into the tension of a decaying relationship torn between the past and the future; the job of a lifetime and its unexpected sabbatical; the buzz of capturing the horrors of war and the downfall of quotidian domesticity. Its intimate dinner party set design, a careful curation of Eli McClintock-Shapiro ’17, gives the feel of an off-Broadway play on the summer festival circuit, while the performances of the powerhouse cast members make it feel like you caught David Mamet’s senior thesis for free.

The play, written by Donald Margulies, premiered in Los Angeles in 2009, starring Anna Gunn of “Breaking Bad.” In Second Stage’s production, director Alex Minton ’17 was lucky enough to cast Emma Hagemann ’17, who was among the 50 women who auditioned for Gunn’s role as photojournalist Sarah Goodwin. Having developed a stellar résumé in Second Stage, most notably with starring roles in hit productions such as “Worm Queen,” Hagemann has her pick as one of the best performers on campus. Nevertheless, she didn’t quite get what she wanted with her role, originally wanting to play Mandy, the other female role in the four-part play.

“I was with my mother, who’s an actress [Christianne Mays], and we were reading the list of shows that were going up, and she was like, ‘Oh, I’ve heard of that show. There are two really good female roles, you should look into it,’” Hagemann said. “And I actually really really loved Mandy, so I thought I was gonna go and get the role of Mandy, and then I auditioned, and I ended up getting cast as Sarah.”

Despite Hagemann’s initial preference, Minton clearly had the right intuition in casting her in the lead role. Playing an injured photojournalist returning from an injury sustained in the Iraq War, Hagemann hobbles around stage with crutches, never recoiling her injured leg, all while sporting scarred makeup on the right side of her body, courtesy of Katie Hohl ’19. The combination of Hohl’s makeup and Minton’s blocking make for several powerful moments where Hagemann turns the scarred side of her body towards the audience before delivering a searing line, such as when she marks the difference between “young and embryonic” when commenting on the introduction of Mandy, who is three decades her boyfriend’s junior. 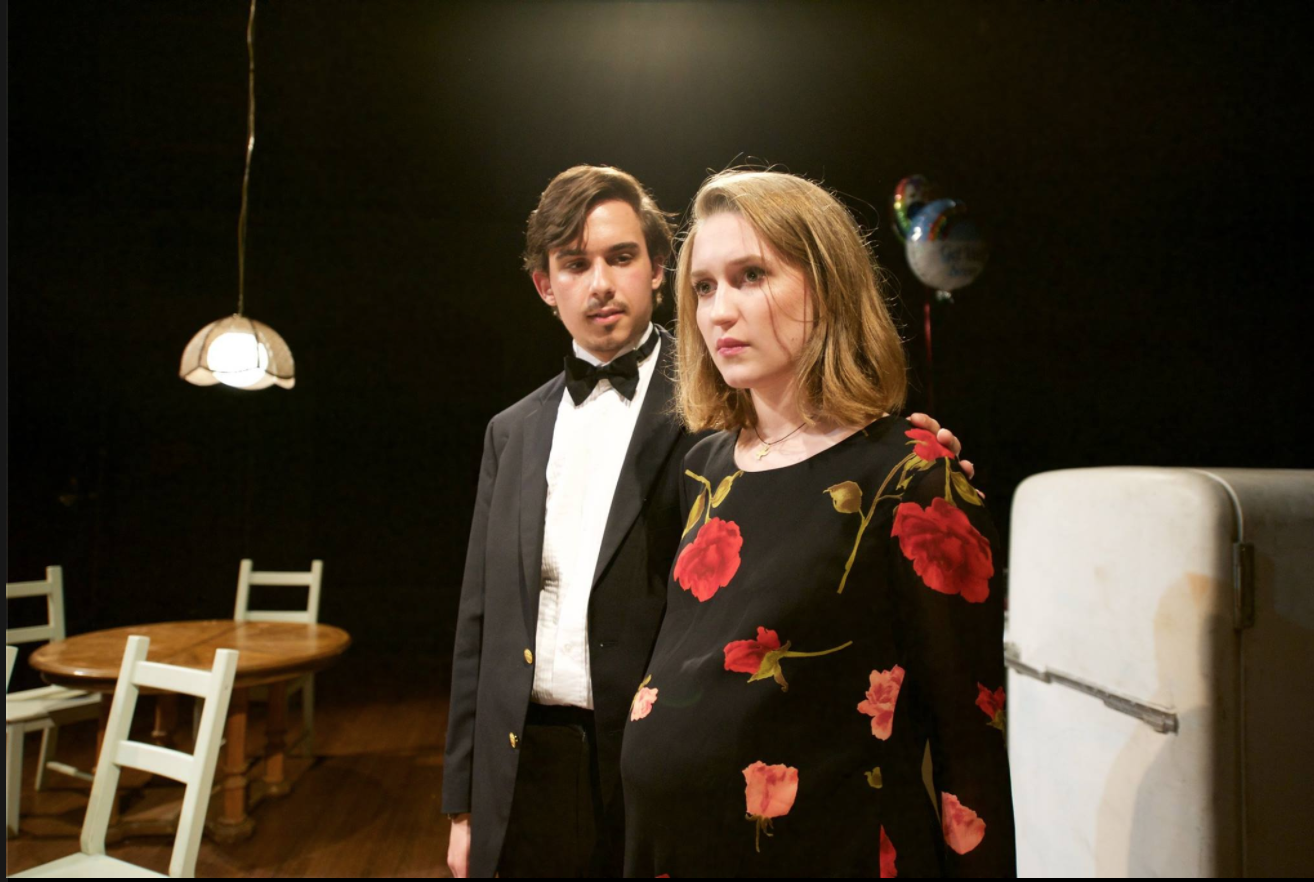 Mandy, played in full naïvité by Grace Stanfield ’20—who deftly deceives the audience into believing she’s a seasoned veteran of the Wesleyan theater scene rather than making her Second Stage debut—serves as the conduit between the audience and three cynical journalists who overthink everything. James and Richard, played by Jack Reibstein ’17 and Henry Spiro ’19, respectively, both represent the jaded skepticism of journalists who’ve had enough of working in the field. Reibstein plays Hagemann’s longtime boyfriend who wrote the stories she shot overseas, while Spiro plays Hagemann’s ex-lover who now works as a photo editor at an unnamed prestigious magazine, presumably The New Yorker, The Atlantic, Harper’s, or what was once The New Republic. The chemistry between Spiro and Reibstein makes the play cohesive, with both men weary of their beloved photojournalist’s fervent desire to go back into the arena of combat. Beyond their shared interest in keeping Sarah safe, however, James and Richard couldn’t be more different as they find themselves in polar opposite positions professionally.

“It was really hard to find the right two guys for the show because the characters are so different,” Minton said. “We really wanted to find two actors who were on the same plane, and it wasn’t working. And then at callbacks, when we put Henry and Jack together, they just worked really really well together, because Henry is younger than Jack, but he plays someone who’s 20 years older, and it worked when we saw them read together.”

The bickering and lingering tension between the journalists leaves Mandy in a precarious position, pacing between the bar and the living room couches, pretending like she has something valuable to contribute to the conversation. Beyond many of her hilariously banal lines, however, Stanfield manages to use her character’s innocence to break through the density of the other characters to reveal the central ethical problem of the play: that these journalists, especially Sarah, derive pleasure from capturing suffering, only to overanalyze their approach in the Brooklyn bubble once they return.

While each character in the play wrestles with the tension between the past and the future, Sarah has the strongest internal struggle as a result of a conflict between the passion she has for her work and the profound uncertainty of who she is without it. Hagemann conveys much of this with body language alone, but when the key moments come, be they flashbacks or angry outbursts, she devotes the depths of her emotional reservoir to making the audience feel her internal pain. This is all the more remarkable given that her character is hard to identify with (unless you’re a workaholic journalist who values tireless work more than any loving relationship, that is).

While the tension between the play’s crisscrossing and decaying relationships is palpable in the first act, the cast kicks it into a higher gear for the second act, to a point where only quiet contemplation can do justice to the performance. With every cast member facing the challenge of playing someone older than themselves, the growth each actor conveys over the course of the play is remarkable. Spiro’s cadence and lingo give him the authenticity of a curmudgeonly photo editor despite his not even being old enough to drink legally. Reibstein’s uncertainty and writer’s block leap off the stage. Stanfield’s transition from a ditsy new girl to a wise mother makes her second act performance almost unrecognizable from her first. Hagemann’s fatigue and unresolved trauma is chilling. At its best, theater requires a team working in sync with little to no difference between levels of performance. Despite Hagemann’s outsize acting ability, the rest of the cast rises to the occasion, and with the help of everyone backstage from the director to the set designer, the show not only goes off without a hitch, but silences the audience and briefly makes them forget they’re watching unpaid actors on a college campus.

“Time Stands Still” is playing in the Patricelli ’92 Theater this Friday and Saturday night at 8 p.m. Tickets are available for free in the Usdan Box Office the day of the show.