Dr. Feryal Salem, Assistant Professor of Islamic Scriptures and Law, lectured on women’s contribution to Muslim scholarship and academia. The presentation was part of the Muslim Women's Voices program sponsored by the University. “The point of our project is to expand awareness, knowledge, and understanding of Muslim cultures through the lens of the performing arts,” said CFA Program Manager Erinn Roos-Brown. 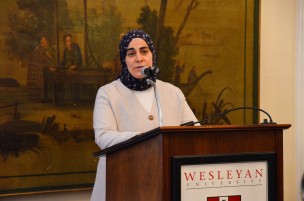 On Monday, Feb. 9, the University’s Office of Religious and Spiritual Life and Allbritton Center for the Study of Public Life sponsored a lecture entitled “Muslim Women: Drawing From the Past to Move Forward in the Future.”

The speaker, Dr. Feryal Salem, is Assistant Professor of Islamic Scriptures and Law, Co-Director of the Islamic Chaplaincy Program, and Director of the Imam and Muslim Community Leadership Certificate Program at the Hartford Seminary. Salem’s talk is part of the Muslim Women’s Voices program at the University that will continue throughout the 2014-15 academic year.

Program Manager at the Center for the Arts Erinn Roos-Brown spoke to the project itself.

“The point of our project is to expand awareness, knowledge, and understanding of Muslim cultures through the lens of the performing arts,” Roos-Brown said.

Roos-Brown went on to introduce Salem, explaining that her research specializes on early Islamic thought with an emphasis on the foundations of Islamic scripture.

Salem began the lecture by emphasizing the importance of having Muslim women’s voices included in Islamic scholarship.

“Many people have strong opinions and pre-conceived notions about Muslim women without ever having met one or engaging in a serious dialogue with [a Muslim woman],” Salem said.

Salem spoke to the empowerment of Muslim women, stating that the most effective way for them to contribute to the direction of their own faith is to become educated within Islamic scholastic tradition itself. In this way, they will have the power to reframe the way Muslim women are spoken about as well as their roles in society.

She expressed the hope that her presentation would be an opportunity for everyone in the audience to recognize their collective humanity and form mutual bonds of understanding.

The lecture continued as Salem introduced and explained a number of books written by Muslim female scholars and how their voices have contributed to lasting change in terms of challenging common perceptions of women and men in Islamic scholastic tradition.

She further discussed the importance of Muslim women entering a realm primarily dominated by male scholars.

She went on to explain a transition that took place during the 19th and 20th centuries in the Islamic world, including a move away from the memorization of texts to a dependence on written materials. The prevalence of print and a capacity for mass publication changed the way knowledge was preserved and passed on, and many people found memorization too difficult or ultimately uninteresting.

“The 20th century also witnessed the general waning of interest in Islamic sciences in much of the Muslim world, whose urban cities reflected an increasing emulation of European secular lifestyles and perspectives,” Salem said.

With these changes in mind, Salem emphasized female authors who were able to simplify important information for Muslims such as elements of ritual, prayer and fasting using a prose format, single volumes, titles, subtitles, lists, and diagrams.

Other topics discussed include the two different works detailing the life of Mohammed and his 60 Companions. Salem clarified that a companion is similar to an apostle in the Christian tradition.

While previous works focused on the struggles and achievements of the men surrounding the prophet, Salem praised a more recent work for using methods more consistent with gender equality.

“The new work, printed in 2004, reframes the presentation of this early history,” Salem said “It examines the important roles of early Muslim figures, irrelevant of their gender…. It [does not] divide a section of the book to men and women as some possible texts do, but rather, it includes the biographies of men and women in a mixed format throughout the book.”

Salem specifically described the portrayal of Khadijah, the wife of the prophet and the first of his companions listed in the more recent text.

“[Khadijah] is presented as the first person to ever believe in the prophet’s message, and the first to love and support him in his message to teach Islam,” Salem said. “What is also interesting…is her portrayal not as a passive participant…who happened to luck out when her husband became a prophet, but rather, as…[taking] the initiative to marry [Mohammed] because she believed he might be the long awaited prophet.”

Salem emphasized the significance of this change in relation to the larger Muslim community.

“This presentation of a strong woman who was an essential figure in the prophetic mission is a radical departure from the way women were presented as marginal figures in other popular works….” Salem said. “It is a profound reflection of the impact of female voices in Islamic scholarship that has burgeoned in Damascus in the past few decades and…of a new found confidence that these women scholars have, as Muslim women who are well-versed in the Islamic tradition.”

Concluding the program, Salem stated that she hopes the impact Muslim women scholars have had in Islamic Scholarship so far will empower others to add their voices to the discussion. She expressed the belief that the tools for empowerment lie within the Islamic tradition itself.

Professor of Religion Peter Gottschalk spoke to the evolution of Islamic thought that Salem discussed.

“I thought it was a really interesting study that demonstrates how on both…a small…and large scale level, changes in interpretation can make a difference, particularly among women,” Gottschalk said.

Khalif Gresham ’15, an event attendee, reacted to the intellectual rigor of the lecture.

“[Salem] was talking about authors who wrote in a way that satisfied the academic [community] but also didn’t leave out the beginner,” Gresham said. “I thought a lot of this talk was over my head…but I still felt included…. Even though I’m not Christian, I’m very much familiar with what an Apostle is, and her inserting that and drawing connections helped…. It was a great talk.”

“This project is really about…challenging stereotypes of Muslim women,” Roos-Brown said. “While we’ve been doing that mainly through performance, we’re on a college campus, so you need to give context and have the more academic side of things as well. I’m really happy that we were able to have Dr. Salem come and give us a talk about her expertise.”