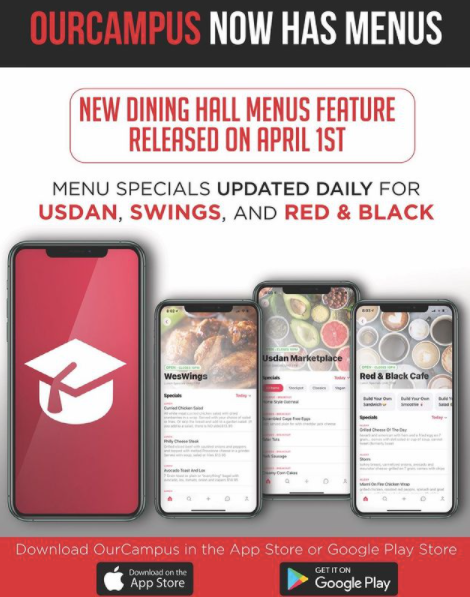 OurCampus, an application that provides reviews of University faculty and information about campus events, added a new feature that lists the daily menus and specials of Usdan Marketplace, WesWings, and Red and Black Café. The app released the update on Thursday, April 1 and it can be downloaded from the App Store or Google Play.

“The menus feature has three sections, Swings, Red and Black, and Usdan,” OurCampus Coder Daniel Knopf ’22 said. “Every day, our code will go to the respective websites of these eateries, and it’ll look at what the menu is, and it’ll scrape the menu and put it into a better, more convenient format. That’s really the main thing about this new OurCampus feature: all of the menus are in one place, and it’s really easy to look at them and see what’s going on.”

In addition to compiling the daily menus and specials, OurCampus lists the hours of operation for each of these dining locations, notes if they accept meal swipes or meal points, and displays their Zingle numbers. The update also allows OurCampus to send push notifications to students when their favorite dishes are available via a new menu subscription feature.  Additionally, the updated app provides links to the Grubhub and DoorDash accounts of some local Middletown restaurants, allowing students to order directly. According to OurCampus Co-Creator Tyler Lederer-Plaskett ’21, this new restaurant feature was included in hopes of strengthening the relationship between the University and the surrounding Middletown community.

“We’re still in the founding stages of what this type of relationship between OurCampus and these businesses is going to look like. We just want to contribute and help out as much as we can, because we know that Wesleyan is not just an untapped market for these businesses, but also [it] can make a really big deal [for] their bottom line,” Lederer-Plaskett said.

Lederer-Plaskett believes this new feature will provide a unique and beneficial experience for all University students.

“I would hear the same grievances from students time after time again, and that’s why we did campus meals, because at this point I live next to Swings, I live up the street from Red and Black,” Lederer-Plaskett said. “I could go on the website, Google search it, and even bookmark it, but it’s still not the same as just having it conveniently updated, telling me…what the food is going to be. While it seems like a rather small issue to have solved, I think it can make a really big impact on students’ lives.”

Since its inception in 2019 by Lederer-Plaskett and Co-Creator Rafael Goldstein ’21, OurCampus’ mission has been to compile information regarding the University from a number of websites and resources into one usable platform.

“[OurCampus is] a mobile application for all campus information in one location,” Lederer-Plaskett said. “We are trying to take the everyday routine of a Wesleyan student and consolidate it into one place that has all of [the] information that they need.”

OurCampus’s original purpose was to function as a professor review app and provide information on University faculty members and courses, helping students with the pre-registration and course-selection processes.

“When OurCampus [was] released…I was overjoyed because it was filling a niche that I felt really needed to be filled, and it was something that I really used a lot and was also a big proponent of,” Knopf said. “I would always look up all of the professors that I was interested in during pre-reg because I wanted to make sure that they were good or not, and I’ve been using it pretty much since it [was] released. I have the pleasure of saying that most of my professors now have been pretty good, because every time I do anything, I take a look at what their reviews are on OurCampus.”

Within the first month of its release, the app was downloaded by over a third of the student population. In early Feb. 2020, over half of the campus downloaded the app, and it was nominated for a Connecticut Entrepreneur Award for Best Venture. In September 2019, OurCampus was updated to allow students to create, advertise, and communicate a variety of campus events.

The app has now been downloaded by roughly 2,000 people, over ⅔ of the campus. Despite it taking two years to institute the two aforementioned features, the new dining feature was created by the work of approximately 15 students over the course of three and a half weeks.

“I’d characterize their growth as thoughtful and strategic,” Patricelli Center for Social Entrepreneurship Director Makaela Kingsley ’98 wrote in an email to The Argus. “They have stayed true to their mission by launching modules that solve real problems for students. Some startups try to scale too quickly and end up pushing out products that don’t serve their mission, are bad quality, or both. OurCampus has done the opposite—they’ve grown steadily without losing sight of their goals or their commitment to quality.”

Despite its growth, Knopf believes that OurCampus has remained centered around University students and their needs.

“Everybody who’s worked on it has put such an immense amount of time into it just to help the Wesleyan community. That’s the whole point of this thing: to help Wesleyan students as much as possible,” Knopf said. “It exists to help you, and I think that those types of projects are the most important things to do.”

Although Kingsley is optimistic about further OurCampus developments, she asserts that its growth is entirely dependent on the students involved.

“I hope that OurCampus continues to build and launch modules that provide elegant solutions that improve life for students at Wesleyan,” Kingsley wrote. “I can easily imagine OurCampus growing to serve other colleges and universities, but I’d only encourage that if it’s what the team really wants. In the meantime, I love the idea that OurCampus can be an incubator for students who want to build tech-enabled applications to improve the campus experience here at Wesleyan.”