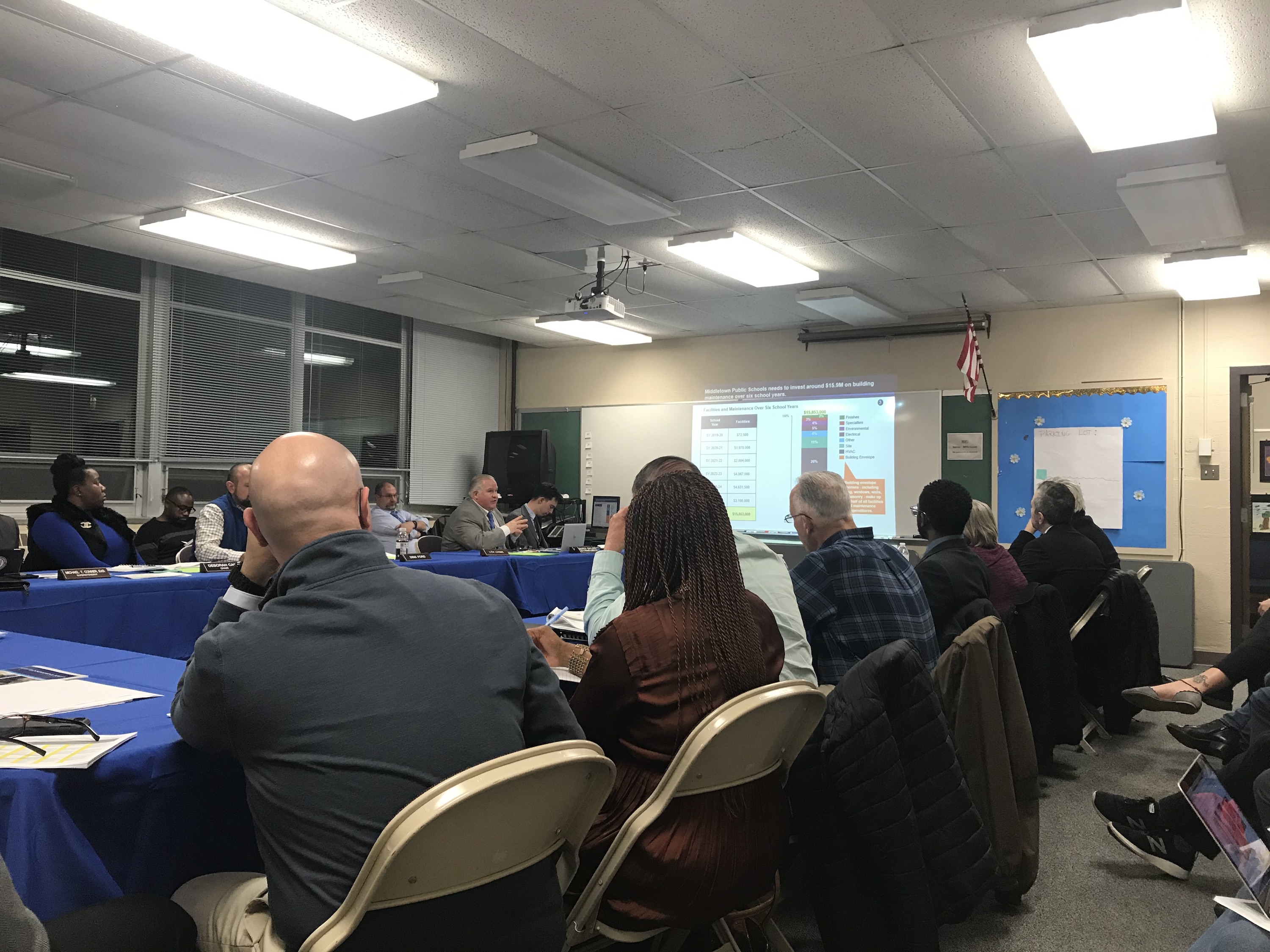 Conner presented information alongside consultants Robert Havdala and Ramiro Flores from District Management Group (DMG), an education consulting firm focused on improving public education. They offered a summary of student achievement in MPS for school years (SY) 2017–19, a financial forecast for MPS over the next five years, and plans for the future of MPS. Specifically, DMG found that if the city’s funding for MPS stays at its current level, MPS will face budget deficit by SY 2024–25.

Florsheim opened the forum by explaining the significance of bringing in consultants from DMG for the City of Middletown and MPS.

“We are really taking what I think is a new and exciting and innovative approach to working collaboratively between the City and the Board of Education in Middletown,” Florsheim said. “This is an exciting thing to be able…to communicate with the public, communicate to our students, our parents, our teachers, our staff about where our budgeting priorities are. And I think more important even than that to give them a voice in what those budget priorities should look like. This is a huge step forward for transparency, for accountability, for responsibility and how we run the Board of Education.”

Havdala and Flores then explained some of their areas of focus and the findings from their research.

“So really what this entire entire effort was focused around was what is the long-term financial outlook for Middletown and Middletown Public Schools more specifically,” Havdala said. “Academically, I think there’s some pretty remarkable things that have been happening here in Middletown. So I really want to be able to put a spotlight on that.”

Conner continued the presentation, detailing some of the improvements that have been made to MPS in recent years. For instance, according to District Management Group’s findings, students in MPS have increased their English Language Arts (ELA) proficiency by 4% from SY 2017–18 to SY 2018–19, compared to Connecticut’s 0.4% increase.

Moreover, each of the MPS student sub-groups—which are divided by categories of race, socioeconomic status, and special needs status—has become more proficient in ELA.

The majority of the MPS student sub-groups also increased their proficiency in Math between SY 2017–18 to SY 2018–19. While these increases were less than the increases in ELA proficiency, they were still greater than proficiency changes for sub-groups in the state overall.

More MPS students are participating in Advanced Placement (AP) classes. There was an 11% increase in students taking AP classes between SY 2017–18 and SY 2018–19.

The most significant increase in AP enrollment was among Black students, increasing from 15% in SY 2017–18 to 31% in SY 2018–19. AP class enrollment also increased for students of two or more races, Latinx, and white students.

In addition, the number of special education students enrolled in AP classes also increased from SY 2017–18 to SY 2018–19.

“Zero percent of special education students in ’17–18 were taking Advanced Placement courses,” Conner said. “Now we’re providing the necessary rigor within their academic program, as we’re seeing 5% of our special education students being introduced to AP courses. We are providing scaffolds and supports for these students…to not only just have them be exposed to rigor but having [them] to be exposed to rigor [and] simultaneously be successful.”

“And even when our school counselors were meeting with the students and their parents, the first thing they were saying is, ‘No, we can’t do AP courses,’” Conners said. “And then we were countering saying, ‘No, you can do AP courses.’ And we actually had to convince some parents to actually matriculate into that, special education students as well…. Because again, we want them to experience success, because the highest effect factor for achievement is self efficacy.”

The conversation then turned to annual city funding for MPS, which makes up the schools’ revenue.

Havdala and Flores projected that if the city continues to increase funding by 2% or less per year, Middletown will face a deficit, or shortfall of $4.5 million by SY 2024–25. Historically, city funding for MPS has increased by around 2.4 to 2.8% each year.

They also forecasted that without a 4% annual increase in funding from the city, MPS will see a growing shortfall in SY 2024–25.

An attendee also spoke about why consistent city funding is important to safeguard against uncertain grant funding, which comes from the state and is subject to change each year.

“With Alliance, Title I, and all of those have had really flat funding,” she said. “Those grants…we just don’t know what we have until we actually get it. Sometimes our grants don’t even come in until October.”

Havdala then suggested where the city’s districts could adjust to combat the predicted shortfall.

“There are many ways and many decisions that the district, that the city, can really think about, ‘How do we actually start to address this?’” Havdala said. “So it could be in terms of where could we reduce costs, whether it be facilities, electricity, energy. It could be paper supplies, for all we know. It could be around re-negotiating contracts with vendors, with unions, suppliers.”

Havdala touched on the complications of having multiple perspectives on budget decisions.

“The problem, and what makes it actually hard, is that people have different perspectives and different incentives on what matters,” Havdala said. “If you’re an English teacher, you probably are going to want to make sure that you have smaller English classes or a better ELA curriculum, whereas other folks might be more interested in the arts…. But ultimately when it comes down to making budget choices and budget decisions, there’s only so much that you can fund.”

However, Havdala hopes that having a long-term plan will help the city make more strategic budget plans.

The plan for food services will work on broadening the Community Eligibility Provision, which allows schools in predominantly low-income areas to serve free school meals to students. Eligible Middletown schools would serve breakfast and lunch to all students in those buildings. The plan also includes a focus on improving and serving school meals during the summer.

The section on facilities highlighted the length of time since many of MPS buildings were last renovated and the need for MPS to invest $15.9 million dollars in maintenance of facilities over six school years.

The speakers then responded to questions concerning the use of technology in MPS and concerns about teachers’ presence in classrooms with technology.

“Even with using any [digital] platform, the teacher is monitoring that platform, they’re looking at what the next step is for the student,” one attendee said. “It’s just the tool that allows us to diminish the achievement gap, to allow students to excel at their own rate.”

Conner also emphasized that computers will not take the place of teachers.

“Never will a teacher be replaced by artificial intelligence,” Conner said. “I’ll say that right here.”

The forum ended with a discussion on the preparation gap between students from different backgrounds and how MPS can provide students support to close the achievement gap through an increased emphasis on social and emotional learning.

“By year 2025, where demographics is going to be changing radically, which 55% of our students will be Black and Brown, and with that, there’ll be a 60% increase of students that are going to be entering our schools, either high needs or at that poverty rate,” Conner said. “We always talk about the achievement gap…. To address the root cause, we have to be able to look at social emotional learning, trauma. And that’s one thing that we have to incorporate into our vernacular…. Students are entering our school with a lot of trauma.”

Another attendee responded with a suggestion for MPS moving forward.

“I think you need to have a conversation with the city around what are we doing prior to the children coming into our schools,” the attendee said. “‘Cause they’re yours from the get-go, so what are you doing to prevent and to support parents and children prior to them coming into your kindergarten classrooms.”