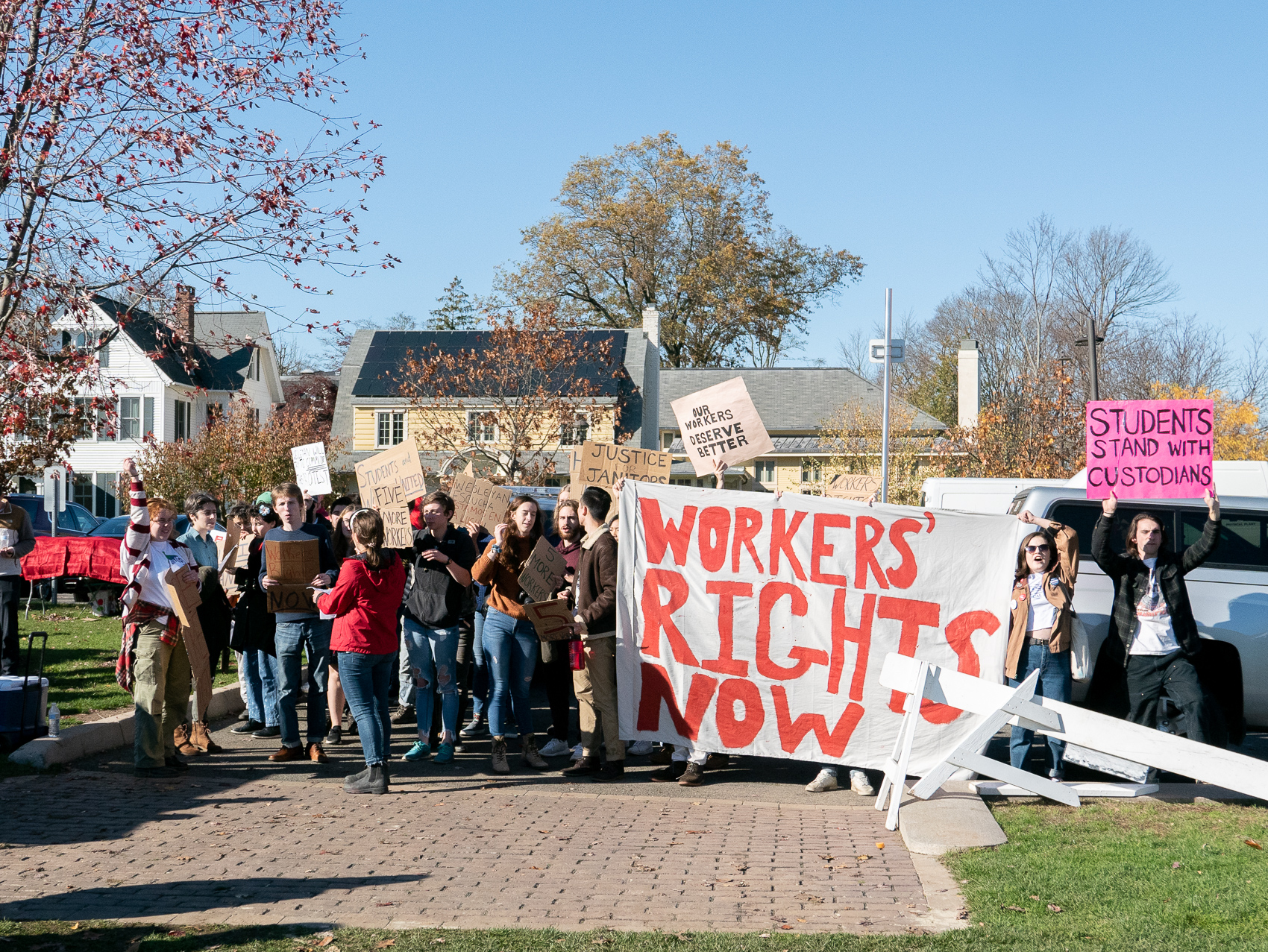 Student activists representing the United Student/Labor Action Coalition (USLAC) held a protest during the Homecoming Football game on Saturday, Nov. 2, continuing to demand the hiring of five more custodial workers. The group of approximately 30 students walked around the perimeter of Andrus Field during halftime.

“Over the summer they hired one more worker,” USLAC member Harry Bagenstos ’22 said. “That’s great, but our sense is that a lot of these problems still exist, and the only way they’re possibly going to solve them is if they actually complete our demands.”

The protest began between Judd Hall and the Public Affairs Center (PAC). Holding a large sign that read “Workers’ Rights Now,” the group of students walked back and forth between Usdan and Judd Hall. Protesters chanted different messages directed at the administration, such as “Roth’s salary stays protected, workers’ rights are not respected,” “No justice, no peace,” and “Michael Roth don’t be a jerk, workers make this campus work.”

Students and families at the Wesleyan tailgate had varied reactions to the protest. Some students commended USLAC’s protest and their ongoing commitment for five more workers.

“The protest definitely caught my attention,” Charlie Hills ’20 said. “I think it’s great that USLAC is continuing to advocate for workers’ rights at this school, and I think collective action is always a great way to bring attention to issues like these.”

Others, however, felt that the protest was out of place.

“I thought it was well organized but maybe not executed at the best time when the most people were listening,” Vanessa Baker ’20 said. “The audience was huge, but no one really knew what they were protesting, unless you’re a student who had heard about it before. Most of the parents were confused.”

The group then walked behind the Wesleyan tailgate towards Olin Library, concluding at their starting point between Judd Hall and PAC. They ended the protest chanting, “We’ll be back!”

After the protest, USLAC members addressed their decision to protest at the Homecoming football game.

“We decided the best time to meet was during Homecoming weekend [because we thought] it was important to continue putting pressure on the University at a time when there is a lot of excitement over things like football and school pride,” USLAC member Leah Levin Pensler ’20 said. “We wanted to draw attention to something that the school really should be ashamed of, and it’s the working conditions on this campus and how they treat their subcontracted custodial workers.”