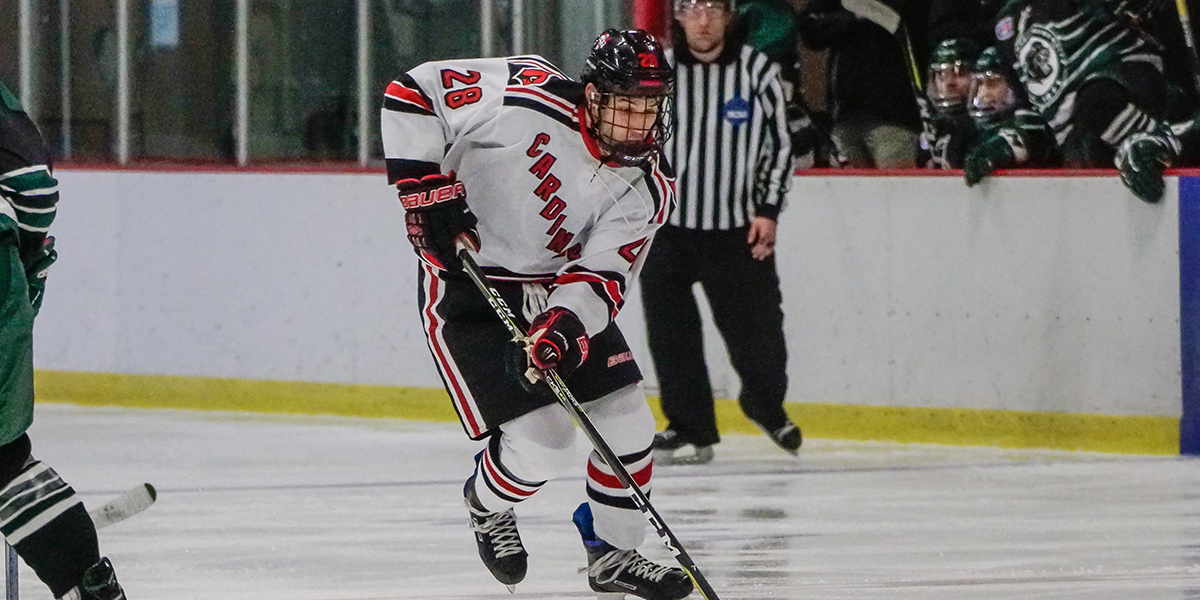 Men’s—The Wesleyan men’s ice hockey team is moving on. With a big quarterfinal victory over Hamilton, the Cardinals advance to the semifinals this weekend for a matchup against Colby.

After a big opening round win in the NESCAC Tournament, the Birds are set on taking home the trophy.

“We’re focused on a championship,” said forward Jordan Jancze ’18. “It’s a different mindset than the regular season. It’s about playing great hockey when the stakes are at their highest. We’re prepared, confident, and most importantly, we’re having fun together. This time of the year is about playing for each other and making sacrifices. Our group does that better than anyone.”

It’s safe to say that the team is locked in. It does not matter which line a player is a part of; the team plays cohesively no matter who is on the ice.

The Red and Black attribute a lot of their motivation and success to their leader off the ice, Head Coach Chris Potter.

“Coach Potter has kept us focused and motivated towards the task at hand,” Jancze said. “He’s been the kind of coach you want to block shots for, that gets the best out of his players. We want to win one for him. With all the work he’s put in for this group, he deserves our best game and a relentless effort this weekend.”

The Cardinals take on Colby this weekend in Hartford, Conn.

Women’s—The Wesleyan women’s ice hockey team’s season has come to an end. Last weekend, the Middlebury Panthers defeated the Cards 5-0 in the opening round of the NESCAC Tournament. The team finished their regular season strong, fighting for a spot in the tournament with a big win against Amherst late in the season.

In addition, individual success came in the form of Second Team All-NESCAC honors for goalie Allegra Grant ’20 this past week.

“Some things we did well this season were upsetting a couple of top-ranked teams like Hamilton and Amherst,” forward Alexis Banquer ’20 said. “It is our goal to play that competitive level of hockey every game and every practice. Despite not having as many of the good outcomes we wanted, we still pushed ourselves to be the best people, teammates, and athletes on and off the ice.”

As many athletes know, there is little time to waste when it comes to planning ahead for the following season. The team is already looking forward to next winter, setting high-level goals and soaring expectations.

“Some goals for next year are the same as goals from this year: winning the Little Three and making a run at the NESCAC Championship,” Banquer said. “Another goal is to pay attention to detail and taking things day by day and not getting ahead of ourselves. Often times, we get lost in the big picture of things instead of buying into the process. It is our goal to remain focused in the sense that while we continue to hold ourselves accountable and responsible for everything on and off the ice.”

However, with the passing of each season, there is plenty of room for reflecting on important memories, especially from upperclassmen.

“My favorite part of the season was beating Amherst, especially because it was our Pink game,” junior forward Gina Mangiafridda said. “Not only was that game crucial to securing a spot in the quarterfinals, but it also meant a tremendous amount to the team.”

And with the season now over, the players will miss playing with each other until it’s time to hit the ice again next November.

“I’m going to miss the opportunity to play every day while having fun at school with my best friends,” said Magniafridda. “Being able to go to the rink and utilize hockey as an outlet from school and the craziness of life is definitely beneficial to me.”