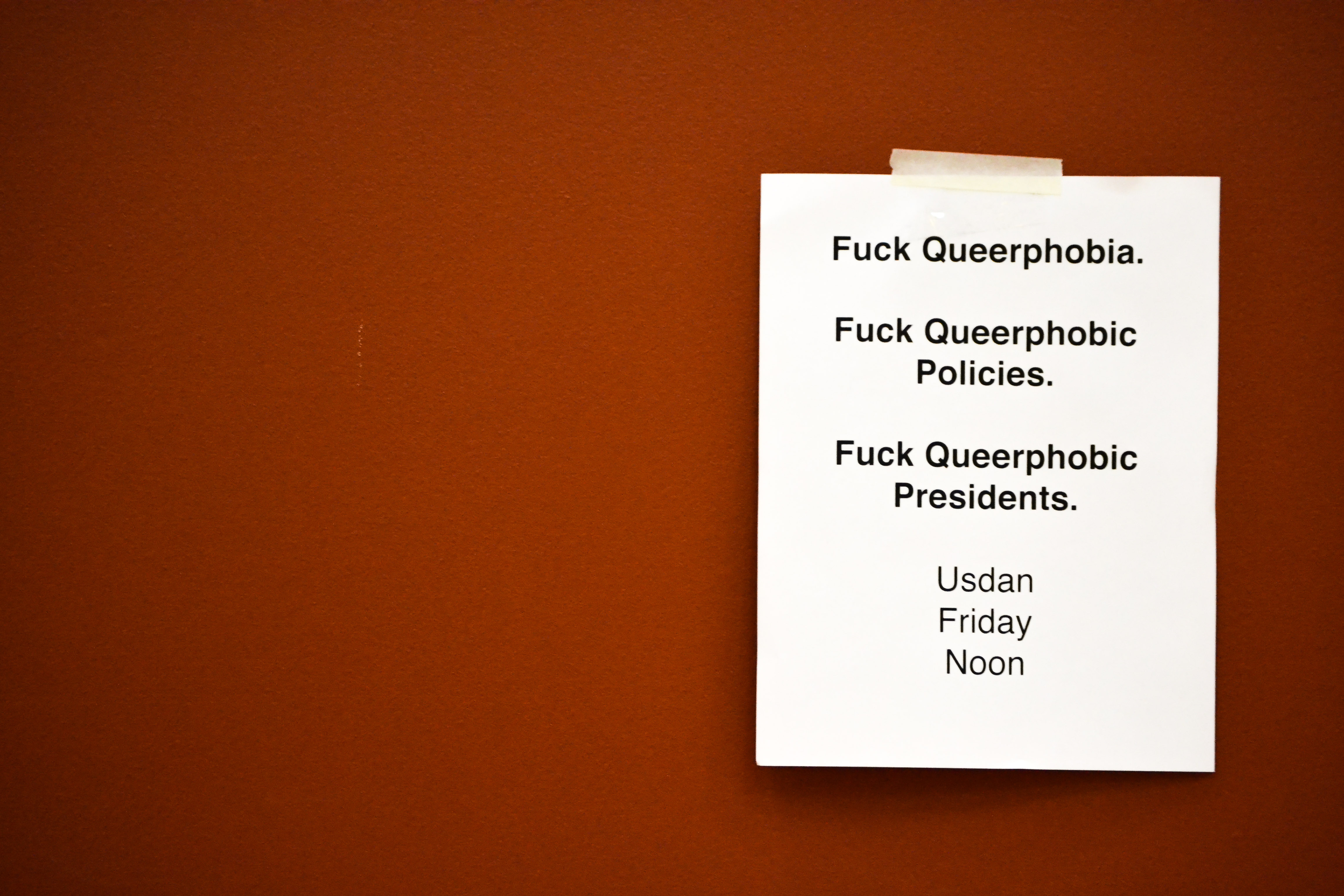 When Charles Wudd ’18 returned to his room on Wednesday, Nov. 9, he reached into his bag for a textbook and instead pulled out a note that read, “Your time is up chink.”

“My first reaction were feelings of overwhelming shock,” Wudd wrote in a message to The Argus. “As an Asian man, I did not expect that the rancor and hatred roused by this election would impact me quite so. After all, there had been no significant attention paid to the Asian American community by either candidate, and after all, I am attending one of more accepting and tolerant universities in America.”

But the University’s apparent tolerance has not insulated its students from bigotry. A week has passed since Donald Trump was elected to the presidency, but students on campus have already reported hate crimes targeting people of color and members of the queer community.

University President Michael Roth wrote an email to the campus community on the morning of Saturday, Nov. 12, addressing the surge in hate crimes.

“This is completely unacceptable, and the University will fully support anyone targeted by hateful messages of this kind,” Roth wrote. “We will also deploy our resources, including appropriate law enforcement agencies, to discover who was responsible for sending any threatening messages. There will be accountability.”

In addition to encouraging students to report incidents using the incident reporting form, Roth placed the crimes in the context of a country and an election plagued by bigotry.

“The public sphere in this country has been for months polluted with an outpouring of racist, misogynistic, and xenophobic rhetoric,” he wrote. “The pain of targeted groups is real because the threats are real, and we must acknowledge those threats and work to stop them from infecting our lives and our campus.”

Sarah Chen Small ’18, a member of the Asian American Student Collective Board, has been active in responding to racist hate speech on campus.

“In a way, I’m not surprised,” she wrote in an email to The Argus. “I’ve seen sports teams not let people of color into their otherwise open parties. I’ve had professors threaten to lower my grade for being ‘that kid’ in class who brought up race too much. The hatred we’re experiencing now isn’t new, it’s just magnified and condoned.”

Small also called on white allies to check in on friends who may be affected by recent events.

“If you’re not checking to make sure your POC, trans, queer, and Muslim friends are alive and well, what is the point of your activism?” she wrote.

Lisa Locascio, Visiting Assistant Professor of Creative Writing, has also expressed concern and dismay regarding hate speech that has sprung up on campus. In class on Thursday, Nov. 10, Locascio was appalled by her students’ accounts. In a Facebook post that night, Locascio wrote about an incident in which a student was called a “faggot”; another student heard people in a passing car shout, “White power! White power!”

“It was a sense of fulfilled, bottomless dread,” Locascio said on Monday. “I want to say I’m surprised, but I think that’s also really privileged, because white people are often kind of insulated from the realities of racial violence and prejudice.”

“I do think that the Trump campaign emboldened a very ugly set of feelings that are much more widespread than many of us have believed, or wanted to believe,” she said. “There’s a great deal of hostility and anger in this country, and there always has been.”

At the start of Friday’s protest, students assembled in the Huss courtyard outside Usdan. Once the organizers opened the floor to statements from attendees, an outspoken Trump supporter stepped up first. Sources quote her as shouting things such as, “I love Donald Trump with every fiber of my being” and; “He’s going to make America great again.”

After responding to calls from other students to explain why, the Trump supporter began shouting at Nathan Mullen ’20, who is gay, to “suck a cock.”

“I proceeded to explain to her why that was homophobic,” Mullen said, adding that the student denied being homophobic and claimed to “love gay people.”

The day after Wudd received the “your time is up” note, another was slipped under his door, this one more elaborated than the last. The second note, which Wudd posted to his Facebook page, features a large swastika and the words “Trump’s America,” as well as a list of four racial, ethnic, and sexual slurs in an interdictory circle, implying that queer people and people of color are not welcome under a Trump presidency.

“While I am capable of taking care of myself and I have endured and overcome much worse in my lifetime, this racial provocation has me finally joining the ranks of so many people in this country who will wake every morning feeling terrified for their loved ones,” he wrote. “I have two younger brothers, one who is four years old (who currently attends kindergarten) and one who is not yet two years old, and now I fear the violence that may befall them and the bile they may encounter at school.”

Mullen, like Wudd, demonstrated resilience in the face of adversity.

“Fortunately and unfortunately, I have dealt with this kind of thing before,” he said. “I feel strong enough to be able to stand up to it.”

Colleges across the country have also reported incidents of hate crimes. At the University of Pennsylvania, black freshmen were, according to the Washington Post, added to a racist social media account that contained racial slurs and provided a “daily lynching” calendar.

Locascio explained that the prevalence of these hate crimes reflects the breadth of support for Trump.

“Yes, I’m certain that there are students on campus who are legitimately racist and sexist, as there are in every population,” she said. “But I think there’s also something about this weird re-branding of the far right that new white supremacists have come up with…. I think there are way too many think pieces about how poor, uneducated people did this to us and not enough about how people with incomes of over $250,000 a year and college educated white women handed Trump the presidency.”

The New York Times has also reported an increase of hostile acts against racial, religious, and sexual minorities on college campuses, including anti-diversity posters at Texas State University, hostility toward Muslim students at the University of Tennessee, Knoxville, and spitting at back students at Wellesley College.

These hateful acts are part of a general surge in hate crimes in the United States in recent years. On Monday, the F.B.I. released a report showing a 67 percent increase in hate crimes against Muslims last year compared to the year before, suggesting that this trend began before the election. By comparison, after the United Kingdom voted to leave the European Union, popularly called “Brexit,” all hate crimes therein spiked 41 percent.

Recent events on campus and around the country suggest that this trend is still on the rise.