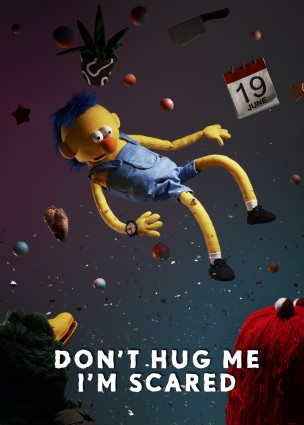 The very title suggests a series that creates itself out of contradictions. “Don’t Hug Me I’m Scared,” which blends puppetry with multiple types of animation, is a six-part series told in installments ranging from three to seven minutes each. Concocted by British duo Becky Sloan and Joseph Pelling, the experimental series has just premiered its penultimate episode. It operates on a surprisingly large budget (after successfully finding funding through Kickstarter after episode two) and produces a video roughly once every six months.

We follow three puppet companions, who remain nameless: a yellow fellow with blue hair, an inquisitive green duck, and a red, unenthused man whose head is the end of a mop with eyes. Each one brings their own blend of observational humor to the table. They are joined by episode-specific guides who teach them about some form of abstract concept (or as the creators call it, “All 6 Subjects of Life”): Creativity, Time, Love, Computers, and Hunger. The final subject is unknown. Creativity is taught by a notepad, Time by a clock, and so on. Each time, the education becomes increasingly malevolent in startling ways. The surprise to each video (bar the first) is not that there is a dark turn, but what direction that turn takes and how far it goes. Each episode is able to remain surprising, because it takes the previously established formula and twists it further.

Each lesson takes the form of a song. An insidiously catchy song. The music reflects the series’ progression. The first two songs are the most cohesive as the series establishes its identity. The third is unusually pleasant, as the episode is a comparatively bright breathing point before things descend into further chaos. The fourth and fifth songs literally fall apart as do the lives of the characters. The beat becomes simpler and less musical to make way for the horrors involved.

Apart from the music, the core of “Don’t Hug Me I’m Scared” comes from its aesthetic. There is a fake innocence to its world. Nearly every object and background feels like it comes from a precisely crafted children’s program. This is then mixed with increasing body horror. Organs and other meats repeatedly show up to graphically clash with the setting and revolt the viewer. All aspects are precisely planned and detailed. I’ve seen many episodes over a dozen times and have caught new details and connections each viewing. Each episode plays with new kinds of animation (from stop motion to computer generated to typography and everywhere in-between).

This aesthetic is the basis for the unparalleled nature of the “Don’t Hug Me” world. The date permanently remains June 19. Art styles jump back and forth. It is a world of nonsense based on concrete rules that no mortal can understand, but there is a continuity amongst the episodes. Many visual cues gain meaning from previous and future installments. The world itself changes, becoming more chaotic in parallel with the series’s descent into madness. It is a world that thrives on contradictions. A butterfly is referred to as a “baby pigeon” and a “pesky bee.” Lyrics include “My Dad is a computer,” and, “Ooh, what’s that? A lovely pie? But you’re gonna end up sad inside.” Things make sense just as often as they don’t. It’s a surreal balance that should not be possible.

“Don’t Hug Me I’m Scared” has a mix of innocence, horror, and humor through anti-jokes that isn’t inherently new. But it is a fine example of the era of esotericism, sharing the same roots as “Tim and Eric” and last year’s phenomenon of “Too Many Cooks.” But “Don’t Hug Me” works differently with the genre. Most esoteric works find their comedy in the weirdness. That weirdness can take any form, provided that it is surprising enough to unsettle and amuse the viewer. “Don’t Hug Me’s” strangeness grounds itself from more tangible sources.

The first episode serves well (and was likely intended) as a standalone. The puppets learn how to think creatively and are horrified by the emotional state they reach. In this way, it’s the most self-reflective and existential installment. In the second, they learn that “eventually everyone runs out of time.” And then things get worse. Episode three explores how loneliness is the only true outcome in the quest for the “special one.” Four ponders what happens to us as we’re sucked into our digital devices: Eventually our digital lives control our real ones. Five, impressively, is even more esoteric, but there are hints of commentary on social crazes about health and dieting. It’s hard to tell, really.

Each installment in some way involves the characters helplessly viewing their own destruction. There is a building meta-commentary on the relationships between viewer, perception, creator, participant, and art (and perhaps death) that began with the first episode, but what that commentary is trying to say is not yet entirely clear. However, there is an absolute sense that the series is building toward a culmination. “Eventually the puppets will understand everything,” claims the Kickstarter page, and although that may be true, there’s a good chance that the finale will leave viewers wondering if they understand anything at all.