Vice President for Student Affairs Michael Whaley emailed the University Community to share the aftermath of the drug-poisoning incident of Feb. 22. 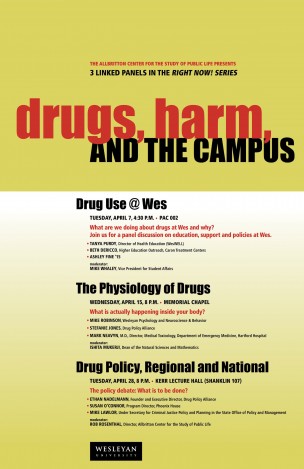 Two students arrested following the drug-poisoning of Sunday, Feb. 22 have been permanently dismissed from the University, according to an all-campus email sent by Vice President for Student Affairs Michael Whaley on Monday, April 13. Five students were arrested after 10 University students and two visitors were hospitalized on Sunday, Feb. 22 for drug overdoses initially believed to be caused by Molly/MDMA. All five students were immediately suspended from the University upon arrest, and the other three arrested students, who remain suspended, are still in their judicial process. The University has not released the names of students at this time.

“Wesleyan is committed to providing a learning environment in which all students can thrive,” Whaley wrote in the email. “The use of illicit drugs is clearly an unacceptable detriment to that environment, and our policies in this regard are firm and clear. Wesleyan’s Code of Non-Academic Conduct prohibits underage and unlawful possession, use, abuse, or distribution of illicit drugs and alcohol. Depending on the circumstances of a case, students who violate this policy may face a range of disciplinary actions, from being required to attend drug/alcohol education and counseling to suspension or expulsion.”

University President Roth explained in an interview with The Argus that a few years ago, the president was taken out of the judicial process. He also spoke to the University’s procedures that led to the arrests of the students.

“As far as I know, the procedures that we followed in the investigations were in accord with our policies. Wesleyan very unusually will enter students’ rooms through permission by the Vice President for Student Affairs,” Roth said. “That’s there for safety reasons and reasons that may have to do with criminal activity…. We are very aware that students want to feel a sense of privacy, but especially in the wake of the extraordinary danger some of our students were put in, we really felt that we had to take some unusual measures that are in accord with our policies.”

Whaley further spoke to how the administration will take action toward drug use at the University. He explained that based on survey data, rates of illegal use of drugs, other than marijuana, are slightly higher at the University than the national average for colleges and universities.

“Still, much as we may deplore exaggerations in the media, it’s clear that the problem of illicit drug use, which exists on campuses across the country, exists here as well,” Whaley wrote. “What the statistics show is that we don’t sweep the issue under the rug.”

Further, Whaley added that the University will continue to make students aware of the dangers of drugs, beginning during New Student Orientation, and will offer workshops and awareness events throughout the year.

In addition, Whaley intends to assemble a task force to look at the policy issues and education initiatives. This group will consist of students, faculty, staff, parents, and alumni experts to identify relevant questions and issues, gather data over the summer, and make its recommendations to Whaley and Roth before the end of fall term.

In an interview with The Argus, Whaley spoke to the emphasis on this task force.

“Right now, I’m working to pull [the task force] together at least once before the end of the semester,” Whaley said. “The idea there is for the group to generate a list of issues, ideas, and so forth that the task force will want to pick up in the fall, which is when I expect that they will do most of their work. If we generate a list of ideas and questions and so forth now, that will give us the summer to gather some information for all the members to work with.”

Furthermore, the University community has been invited to attend the various panel discussions hosted by the Allbritton Center For The Study Of Public Life. This three-part series is on “Drugs, Harm, and the Campus.” On Tuesday, April 7, Whaley moderated the first discussion entitled, “Drug Use @ Wes” in which the panel discussed drugs at the University and how to address the issues.

The second session will be held on Wednesday, April 15, moderated by the Dean of the Natural Sciences and Mathematics Ishita Mukerji. This session will discuss what is happening inside your body and the physiology of drugs, featuring three speakers: Assistant Professor of Psychology and of Neuroscience & Behavior Mike Robinson, Stefanie Jones of the Drug Policy Alliance, and Dr. Mark Neavyn of Hartford Hospital’s Department of Emergency Medicine. The final session will be held on Tuesday, April 28 to discuss policies and what should be done to address these issues. This panel will be moderated by Rob Rosenthal, Director of the Allbritton Center for the Study of Public Life, and will feature Founder and Executive Director of Drug Policy Alliance Ethan Nadelmann, Program Director of Phoenix House Susan O’Connor, and Under Secretary for Criminal Justice Policy and Planning in the State Office of Policy and Management Mike Lawlor.

Students are encouraged to attend these events to learn more about the issues. Recordings of these sessions will be available on the WesWell website.