Mike Whalen was named full-time Athletic Director, making room for Dan DiCenzo to become just the seventh head football coach at Wesleyan since World War II. Whalen went 7-1 in the past two seasons and collected a share of the NESCAC championship in 2013. 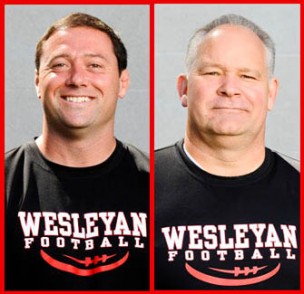 When Mike Whalen ’83 returned to Wesleyan in 2010 as Head Football Coach and Associate Athletics Director, his goal was to make the team a NESCAC powerhouse and revitalize the support for his program both in and outside of Corwin Stadium. He undoubtedly exceeded expectations there, going 7-1 in the past two seasons and collecting a share of the NESCAC championship in 2013.

Less than a week after his induction into the Middletown Sports Hall of Fame, the Wes alumnus felt that now is the right time to step down from his position on the gridiron and to focus on improving Wes athletics across the board as the Cardinals’ full-time Athletic Director.

“When I came here five years ago, we had talked about the transition from being Assistant Athletics Director and Head Football Coach to Athletics Director and Football Coach, and how realistic it was to sustain a dual role for an extended period of time,” Whalen said. “From my perspective, I wanted to make sure that the football program had a really good foundation. The plan was kind of in place from when we got here five years ago and everything went well.”

Linebacker Alex Daversa-Russo ’16 shared his personal thoughts about the former head coach“He was able to change the mentality of the program by bringing in great student-athletes willing to work hard,” Daversa-Russo wrote in an email to The Argus. “Coach Whalen will still be athletic director, so I will still see him at the athletic center and I am sure he will be at the games.”

Whalen will hand the reigns to DiCenzo, a worthy and respected candidate.

“I think that we’re in a position now where Dan’s a great young coach who is a perfect fit for Wesleyan in terms of his pedigree,” Whalen said.
DiCenzo has a history of coaching and playing in the NESCAC, spending time as a two-sport captain at Williams College. Whalen commended his performance as defensive coordinator and associate head coach.

“Honestly, if someone hadn’t been in the wings waiting, it wouldn’t have been as easy for me to step away,” Whalen said. “Knowing the way our current student-athletes feel about Dan, I just feel very comfortable with stepping down and handing the responsibilities over.”

After graduating from Williams College in 2001, DiCenzo had a stint as the head wrestling coach and assistant football coach for his alma mater. In 2010, he arrived at Wesleyan University, and his first season as head coach in 2015 will mark his sixth campaign with the Birds.

“I’m really excited,” DiCenzo said. “My goal was to become Head Football Coach. I knew that the opportunity would arise five years ago when I came here with Coach Whalen. We have some great kids who are working hard, and it’s been a great environment, so I’m just really excited for the chance.”

This past year, the Gridiron Club of Greater Boston honored DiCenzo as the Division III assistant coach of the year. Under DiCenzo, Wesleyan allowed NESCAC-low averages of 220.8 yards per game this season and 256.6 in 2013.

Whalen and DiCenzo have a long, successful history together, dating back to their time on the Williams football staff. DiCenzo handled the defensive backs, and nine of the players under his coaching earned all-NESCAC recognition.

“Dan was on my staff at Williams, and he was a young coach at the time,” Whalen said. “He had done an outstanding job with the wrestling program at Williams, which he took over for me after I became the head football coach. We’ve kind of gone through this before but with a different sport. I think the bottom line for Dan was [that] coming to Wesleyan meant the opportunity to prove himself and be a defensive coordinator, and we also named him the associate head coach.”

Indeed, Whalen said he believes that DiCenzo proved himself in his time at Wesleyan, especially as a defensive coordinator. In that area, Wesleyan led the nation this year.

“He knew that if he came down here and had this opportunity to be defensive coordinator and be my right hand in helping build this football program that it would position him to be the next head coach at Wesleyan,” Whalen said. “I think anyone on the outside looking in can see statistically what we’ve done on defense.”

This succession move, he said, has been a long time coming.

“Given the opportunity, [DiCenzo] has stepped up. Once I took over the AD role, I gradually started putting more things on his plate to prepare him for this day,” Whalen said. “It wasn’t written in stone, but it was a plan that was talked about between President Roth, myself, and Dan.”

DiCenzo said he hopes that his past experiences as an assistant coach at Brown, Trinity, Williams, and Wesleyan will lead him to future success on the sidelines.

“I’ve been fortunate to have some great mentors in my life who have taught me what it takes to be successful,” DiCenzo said. “I’ve learned a lot of football from a lot of great guys and I’ve been lucky enough to work with those guys. I played for legendary coach Dick Farley and worked for great head coaches in Chuck Priore, now at Stony Brook, and Phil Estes at Brown. I’ve been with [Whalen] for the past 11 years, and it’s been great. If you’re the type of person who works hard, then Mike will bring you along for the ride. I’m fortunate enough to have been there with him for the success, and I’m excited about the future.”

As to whether Whalen’s decision would affect the incoming recruiting class, DiCenzo quickly rejected those claims.

“No,” he said. “We told our team a while ago. I don’t think it’s been a secret to our kids for the last couple of years. We wanted to officially tell them in person, so we had a team meeting last week. A lot of the recruits already knew from visiting and spending time with the current players. Most of our recruiting is done already, and it’s a great situation where I’m the head coach and the former head coach is my athletic director.”

Liked by many of his current and former players, DiCenzo thinks that his ability to build relationships with his athletes is one of his strongest attributes.

“I try to connect with the players really well as student-athletes,” he said. “Academics are always first and then athletics are a close second. I am interested in being at academic schools, and Wesleyan has been tremendous to me. As a coach, I’m really involved on the field and am passionate during practice. My goal is just to try to make our guys better every day.”

As head coach, DiCenzo will be making some adjustments to the team’s management, but his promotion will not change much in terms of defensive strategy.

“Right now, we are going to be working out a few staff changes,” DiCenzo said. “I’m still going to be very heavily involved in the defense. Coach [Jeff] McDonald will definitely have an increased role next season on the defensive side of the ball.”

After Whalen’s success, expectations for the incoming head coach will certainly be high, but DiCenzo feels ready to tame them.

“Our goals all the time are very simple,” he said. “We want to get better every day. We lost a very close senior class that was the first class we recruited five years ago. We always want to compete for a conference and a Little Three title, and our players know that. I’m excited about the process, and it’s great to see a team grow together. It’s simple in that we just want to get better every practice every day, as well as get better in the offseason. We want to put ourselves in the best possible position to compete next year.”

DiCenzo expressed only optimism about his new position.

“From the students to the faculty to the administration, everyone that I’ve been with has been awesome,” DiCenzo said. “I really think that Wesleyan is a unique and great environment. In terms of football, whether it was someone on the grounds crew, a professor, or an administrator, everyone is on the same page and wants the program to succeed. I’m excited to be a part of it, and I can’t thank Mike Whalen and President [Michael] Roth enough for the opportunity.”