This monument to survivors of sexual assault aims to create a space of public healing. 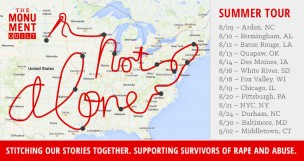 This afternoon, the University will be the first college campus to host the Monument Quilt, a large quilt composed of 250 squares documenting stories of sexual violence and assault. The Quilt has toured the eastern United States throughout the month of August, making 13 stops, starting in Arden, NC, and ending in Middletown, CT.

Natalie Ancona ’15 explained that the Monument Quilt is an ongoing project that will eventually be placed on the National Mall in 2016.

“The idea behind the Monument Quilt is that there’s never been a monument for survivors of rape and sexual violence,” Ancona said. “It’s not really a nationally or internationally recognized thing that has passed. It’s still in the process.”

A collective of individuals called the Feminist Underground, headed by Ancona, Chloe Murtagh ’15, and Ryden Nelson ’16 coordinated the Monument Quilt event at the University. Other sponsors of this event include the Feminist Art and Thought Collective, Students for Consent and Communication, Clinic Escorts, the Sexual Assault Response Team, the English Department, the FGSS Department, Writer’s Bloc, and the Women and Families Center.

Although the Quilt has reached many communities on the East Coast, Wesleyan’s event will be the first that is student-focused. Murtagh stated that FORCE leaders Hannah Brancato and Rebecca Nagle reached out to the group following the controversy about sexual assault in fraternities on campus in spring 2014.

“They had been following the situation at Wesleyan last semester and found it very disturbing,” Murtagh said. “[They] understood how turbulent it was and thought that since they were doing this summer tour, they could end the tour at Wesleyan and help us start the year off on a really empowering, positive, forward note.”

Connecticut Senators Richard Blumenthal and Chris Murphy will be speakers at Tuesday’s event along with the founders of FORCE and several others. The tour stop will include multiple events spanning from Tuesday’s quilt showcase on Foss Hill to an art exhibition in the Zelnick Pavilion. The tour will end on Sunday, Sept. 6, with a quilt-making workshop led by Sexual Assault Response Coordinator Alysha Warren, as well as Isabel Alter ’17 and Tess Altman ’17. The squares that are made in this workshop will be a part of the Monument Quilt on its next summer tour in 2015.

Alter spoke to the importance of making the workshop a communal space for healing.

“Reinforcing the ‘you are not alone’ message is a really big part of this, and a good thing to get early in the year,” Alter said. “One of the things that I have clearly understood so much better [from The Monument Quilt] is how much the [University] staff that works immediately with this really cares….There are too many people that care for nothing to change.”

Nelson stated that the events are designed to continue the conversations about sexual assault on campus that began in the spring.

“[It’s about] maintaining the momentum that we developed last semester but maybe changing the timbre of the conversation so we’re not focused on cutting the population of the school in half between pro-frat and anti-frat,” Nelson said. “It’s not nearly that simple.”

Murtagh agreed, adding that the Quilt provides a safe space for survivors of sexual assault.

“The Monument Quilt is coming to create a space of public healing and public support, and to revamp the community engagement in this issue,” Murtagh said. “This event is hopefully going to inspire people to work for change both socially and policy-wise, but it’s really focused on the community aspect. Experiencing sexual violence should not be a private, shameful experience. We should have a community where people will publicly support you.”

University President Michael Roth voiced his support for the presence of the Monument Quilt on campus.

“I think that [it is] a really important thing to remind students, especially a student who might have been a survivor of an assault, that she’s not alone,” Roth said. “There are other people who have suffered from these kinds of incidents. They have survived and they have made their environment a better place by reporting them. They have helped raise awareness and when a perpetrator is found, that person will be punished accordingly.”

Murtagh noted that although the Monument Quilt is focused on community impact, the Feminist Underground hopes it inspires the University to update and revise its sexual assault policy.

“There are prevention efforts and adjudication efforts, and both need to be completely revamped,” Murtagh said. “We need the school to beef up its prevention and encourage this conversation and not do stupid token activities like AlcoholEdu; to have real, conscious prevention efforts including getting rid of problematic aspects of the campus culture; and second, real adjudication that is consistent and takes seriously sexual violence.”

Events throughout the week are open to all members of the University and Middletown communities. Ancona hopes that the Monument Quilt will jumpstart conversation among everyone who attends.

“The Monument Quilt is really cool because you can read literally all kinds of stories of sexual violence,” Ancona said. “It doesn’t just look like the typical narrative. It’s a lot of different kinds of stories all under this umbrella term of sexual violence. I think our campus needs to understand because people think that it’s not here sometimes, but it’s everywhere. You just need to open your eyes.”

Altman noted that the large physical size of the Monument Quilt will draw attention to both the Quilt itself and the stories that it stands for.

Altman added that the Quilt’s huge size speaks to an inclusive spirit overall.

“If you’re interested, or you care, or you’re affected, there’s a place for you here,” she said.