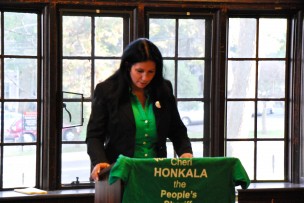 Green Party Candidate for Philadelphia Sheriff Cheri Honkala spoke at 200 Church before a group of approximately 50 students on Monday night. She discussed her background as a protester as well as her hopes for the Green Party.

“[In] the neighborhood that I work and live in, welfare used to be the source of income and now drugs are the number one source of income,” Honkala said. “Every day life is like living and working in an emergency hospital and that’s not the type of world I want my children to grow up and live in.”

As a formerly homeless single mother, Honkala said that she believed it necessary to act against the widespread poverty present in America. She has worked for 25 years as both a protester and protest organizer to combat this problem. Honkala has been involved in several major protests and has been arrested over 200 times, while also founding the Kensington Welfare Rights Union and writing a “take-over handbook” for protesters.

During the lecture, Honkala spoke at length about several protests she was involved in, particularly a protest in Harrisburg, PA. In 1996, she helped lead 60 families on a seven-day march from Philadelphia to Harrisburg, where they demanded to speak with then-Governor Tom Ridge about the problem of homelessness within Pennsylvania.

Honkala went on to describe how afterward, she and her fellow protesters proceeded to camp out in the Harrisburg Capitol rotunda for several days. Honkala also mentioned several other protests she had been involved in, including protests at both the 2000 and 2008 Republican National Conventions.

Despite her history of civil disobedience and condemnation of politicians, Honkala was still dedicated to running for office as a member of the Green Party. On Feb. 17, she announced her decision to run in an effort to help the growing homeless population in Philadelphia.

Honkala is running as the “people’s sheriff” and has vowed to represent the people of Philadelphia in a way she feels that previous sheriffs have failed. If elected, she plans to address the foreclosure issue in Philadelphia by not enforcing evictions and helping residents remain in their homes.

“I will not engage in the business of selling homes to developers and speculators and the banks,” Honkala said. “What I will do is basically turn the sheriff’s office into a drop in center to resolve problems. I intend to focus on ensuring those families remain in their homes and that we do something about the 40,000 vacant properties in Philadelphia.”

Given that she is running as a third party candidate in a two party system, many people might be skeptical about Honkala’s chances. Despite this, she believes she has a good chance at winning.

“I think I have a wonderful shot [at winning],” Honkala said. “This is a different time in history and people are pretty fed up and tired about what’s happening. People are not happy with what’s happening in this country. I think this is a great time for independents to run and redefine the agenda for our country.”

Many members of the Green Party have been extremely enthusiastic about Honkala’s decision to run for office. Two Green Party Officials also attended her lecture.

“This is part of a national campaign,” said Connecticut Representative of the Green Party National Committee Tim McKee. “She’s been receiving attention and donations from all over the country. There’s a lot of frustration and a lot of people looking for changes and new candidates, so we hope that the people can find some enthusiasm for what she’s talking about and get involved or donate.”

The lecture also marked the founding of the Wesleyan College Greens by Ross Levin ’15, who volunteered on Honkala’s campaign this summer and organized the lecture. At the lecture, over 35 students expressed interest in joining the group.

“I thought it was a really good [lecture],” said Sophie Massey ’15. “I definitely want to learn more about the Green Party. I definitely think it changed my views.”

Some students who attended the lecture drew connections between Honkala’s experiences and the ongoing Occupy Wall Street protest.

“I thought that she made a really good point about how, as people are occupying financial districts across the country, there are also thousands of people struggling simply to occupy their homes under the threat of eviction,” said Jeremy Keim-Shenk ’12.

Levin was pleased with Honkala’s lecture and the unique views she represents.

“I thought it went really well and I was happy with the turnout,” Levin said. “It was not the best speech I’ve ever heard Cheri give, but I was happy that she could come in and explain who she was and give this different perspective than I think is typically seen on campus.”