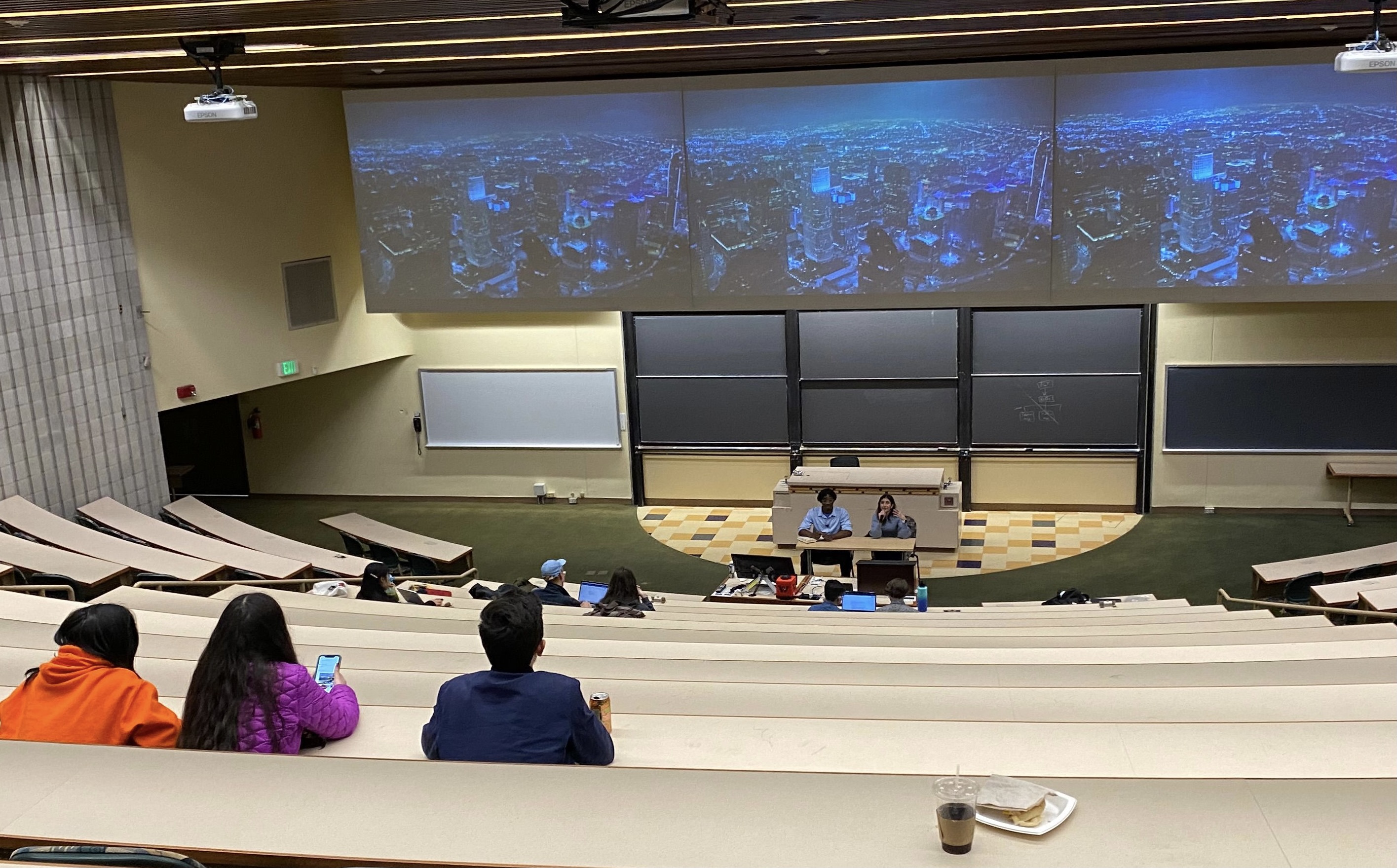 The two candidates running to be president of the Wesleyan Student Assembly (WSA) in the coming academic year—WSA Chief of Staff Isha Jha ’23 and WSA Senator Nigel Hayes ’23—debated one another at Tishler Hall in Exley Science Center on Wednesday, April 20. This election marks the first time since 2016 that more than one candidate has sought the WSA presidency. Voting will end on Friday, April 22 at 11:59 p.m.

The debate, which was moderated by two representatives from The Argus, opened with a two-minute statement from each of the candidates describing their platforms, goals, and reasons for running for WSA president. After the introductions, moderators Caleb Henning ’25 and Elias Mansell ’24 began asking the candidates questions, with each candidate given two minutes to respond and one minute to reply to the other person.

In her opening statement, Jha focused on five aspects of her campaign: social life on campus, the staff retention for women of color, more equitable funding for student groups, ensuring that the University’s Student Affairs Emergency Fund has a student auditor, and bridging gaps between the University and Middletown. Jha emphasized that the motivation for her candidacy was rooted in a general misunderstanding among the student body of the WSA’s duties.

“In a lot of conversations with my friends, I noticed that people didn’t really know what WSA was,” Jha said. “They don’t really know the role we have in the community and how much we can really help students with whatever issue they need.”

In his opening statement, Hayes explained that, if elected, he would work to create a new unified campus information hub, increase funding to first-generation, low-income (FGLI) groups on campus, and revive social life on campus. Hayes quoted his campaign slogan, “Onward ever, backwards never.”

“[The phrase means] building culture and looking forward to the future and making sure we don’t repeat mistakes from our past,” Hayes said.

The first question asked the candidates about their plans to revitalize social events and traditions on campus as the administration eases COVID-19 restrictions. Hayes responded by explaining his hopes to increase the number of outdoor social gatherings, including Spring Fling, and hold more events at the start of the year.

“[I want to] really focus on the student activities fair and the way we demonstrate clubs at Wesleyan, but also the way that other class years were robbed of different things, like the class photo, and find ways to bond, and ensure there’s alternatives always in place and create new traditions,” Hayes said.

In addition to wanting to bring back Spring Fling, Jha argued in support of ensuring that identity groups have the necessary funds to hold community-building events.

“A lot of times, I think that the [WSA] bylaws may not make it successful or easy for it to happen, so that’s something I’d really love to work on,” Jha said.

The two were then asked how they would ensure that student voices are heard and incorporated in WSA decisions. Jha proposed sending out surveys to get students’ opinions on WSA issues, while Hayes suggested recording WSA General Assembly meetings to make them more accessible to students who do not attend.

The next question asked candidates how they would ensure that the multiple long-term construction projects on campus, such as the Public Affairs Center (PAC) and the new science center, would not negatively affect students’ college experiences. Hayes emphasized that problems presented by construction harken back to a larger issue of poor communication between students and administration.

“I think one of the biggest problems is just how information is effectively delivered,” Hayes said. “If there’s gonna be a change of flow in traffic, students should know ahead of time and adjust their schedules.”

Jha agreed that communication from the University’s administration on the construction needs to be improved, especially to incoming first-years who have less experience navigating campus. Additionally, she emphasized the prioritization of students’ sleep over early-morning construction, explaining that she hopes to be proactive in discussing future construction plans with the administration.

In view of the recent formation of the Wesleyan Union of Student Employees (WesUSE), the candidates also discussed how many other student workers are still under-compensated for their labor. Jha explained that she hopes to work with the Finance Office and Office of Student Affairs through the WSA’s Student Employee Advisory Committee Task Force to resolve this issue.

“I think something that’s really important is…going to different groups on campus and seeing how we can help them,” Jha said. “In terms of raising the work-study cap, that is definitely something I as president would love to talk with the Finance Office about. I think student employment on campus is important and it’s difficult for a lot of students that are struggling.”

Hayes emphasized that he wants to broaden student labor coalitions like WesUSE and improve data tracking to include the number of currently employed student workers, what they are doing, how much they are being paid, and how long they work.

Amid widespread student dissatisfaction with the University’s Counseling and Psychological Services (CAPS), the next question asked Jha and Hayes what they would do to support and improve student mental health. Hayes hopes to work with the next Academic Affairs Committee chair to evaluate classroom syllabi and policies and help professors to work as allies.

Jha responded that professors can be a better resource if they are made aware of student issues by analyzing the Office of Health Education’s Student Well-Being Survey results. She also wants to transform CAPS into a more long-term therapeutic program.

“As president, something that I want to look into is [to] work with the Board of Trustees and create a CAPS that is able to support students throughout their time at Wes and not for just a few weeks,” Jha said.

The next question asked what candidates would do about overcrowding in areas such as Usdan Marketplace and residential spaces such as Bennet Hall. Jha noted that in her discussions with the Board of Trustees, it was agreed that residential spaces on campus are not built to sufficiently accommodate the current class sizes. She intends to work with the Board to create new student dorms.

“If you live in a Foss Hill dorm or a High Rise or Low Rise [apartment] or even some of the wood frames, they are not the best spaces to live in, and they are not built for the class sizes we currently have on campus,” Jha said. “As president, I would love to work with the Board of Trustees on ensuring that new building projects aren’t just focused on the new science building or PAC, but actually creating residential dorms on campus, places where people feel supported.”

Hayes hopes to make students aware of other, less crowded spaces on campus where they can spend time.

“Throughout the year, encouraging events…in unorthodox spaces, and also spaces [students] don’t inhabit enough,” Hayes said. “Places that students don’t usually spend time in, because they usually don’t think they can, but they’re totally open to.”

The final question asked the candidates to explain one thing they would do to improve students’ academic experiences. Hayes called for a reemphasis on the rule of seven as a tool to help students mitigate burnout. He also wants to review attendance policies for classes, especially considering online alternatives and resources that were made available during the COVID-19 pandemic, to make class content more accessible when students miss class.

“There’s this idea at Wesleyan where a lot of people are burnt out from the pandemic but also professors not understanding that mindset,” Hayes said. “I think as well—within Academic Affairs—promoting ideas of technological availability. There’s so many online resources that aren’t very well listed to us, whether it’s discounts or different apps, that are very useful and very underutilized.”

Jha emphasized both increasing awareness of academic resources and instituting academic improvements in the form of new minors. She also hopes to make current majors more diverse and equitable by finding a way for students of color to have a support network in these majors.

The election results will be released by 9 a.m. on Saturday, April 23.

Caleb Henning is a Staff Writer and Financial Manager for The Argus.

Elias Mansell is a News Editor and Head Copy Editor for The Argus.