On Friday, March 4, the University’s Residential Life (ResLife) student employees announced that they had formed the Wesleyan Union of Student Employees (WesUSE), a union affiliated with the Office and Professional Employees and International Union (OPEIU), and requested voluntary recognition from the University. This statement was made in a letter addressed to President Michael Roth ’78, Director of Residential Life Maureen Isleib, Vice President and Dean of Students Michael Whaley, Associate Dean of Students Frances Koerting, and the board of trustees. If the administration does not recognize the union by Friday, March 11, an election with the National Labor Relations Board will be filed to attain recognition of the union. Ultimately, ResLife student workers hope that unionizing will allow them to gain the traction to renegotiate their contracts.

“Giving students an opportunity to negotiate what the terms of their contract are is really important, because right now if you don’t like parts of the contract, they just won’t hire you point blank, and I think that’s exactly the reason why we need this demonstrated collective action to show that what we’re being offered isn’t good enough,” Ruby Clarke ’24, a Community Advisor (CA) who sits on the Undergraduate Residential Life Committee (URLC) of the Student Life Committee (SLC) of the Wesleyan Student Assembly (WSA) said in an interview with the Argus. “We’re gonna wait until we can get some better offer because the school can do that.”

The announcement about the formation of WesUSE was followed by a WesUSE rally on Saturday, March 5 in front of North College. The rally, attended by over 250 people, featured various speakers, including current Residential Advisors (RAs), House Managers (HMs), CAs, Connecticut representatives and senators, and Middletown Mayor Ben Florsheim ’14. At the rally, WesUSE encouraged students to sign their letter and to send it to parents, incoming first years, staff, and other contacts so that they can garner as much support as possible. At the time of publication, the letter has over 1,000 signatures. 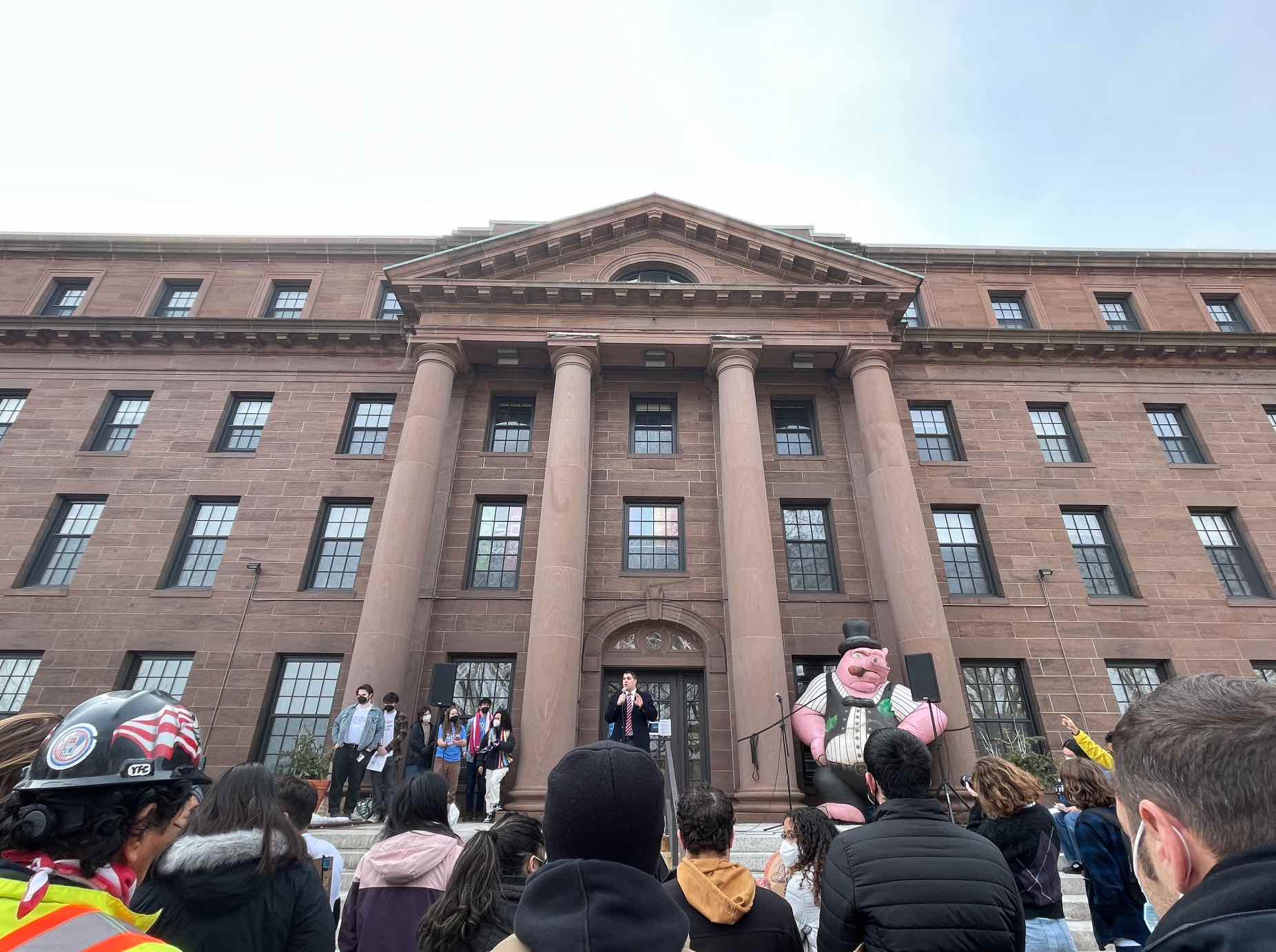 One of the first changes that WesUSE is advocating for the University to cover the full cost of room and board for ResLife employees. They pointed out that this is a norm at many universities, and Wesleyan’s $1.65 billion endowment should make this possible.

“The residential comprehensive fee as it is proposed right now for freshmen and sophomores [is] $17,531,” Clark said at the rally. “Is that…more or less than $2,610 [the amount CAs get paid yearly]? As someone who has not taken a math class at Wes and never will, I understand that basic [math].”

Another change WesUSE wants to see with student worker contracts is for ResLife student employees to receive hazard pay for the hours they have spent working in dangerous conditions resulting from the COVID-19 pandemic. Residential Advisors (RAs) Violet Daar ’22 and Dennis Law ’23 explained at the rally that when the University shut down before Thanksgiving break in Fall 2020, RAs were put in charge of dormitory closing procedures without any explanation for how the University planned to keep them safe when interacting with students who might be sick.

“[When the University shut down,] there was a lot of fear going around,” Daar said at the rally. “‘I remember…being like, I don’t wanna go into everyone’s dorm building where they might still be while there’s this huge spike that is a safety concern for everyone else except us’…. We also had become aware of a lot of hazard pay organizing efforts across the country, and we were like, we are workers who are at risk of hazard because of this pandemic. That is something that we should get to as well.”

WesUSE hopes to ensure that ResLife workers are more fully compensated for their work. Clarke pointed out that ResLife student workers are on the clock 24/7 while administrators get to go home at the end of the day.

“There’s never a day when I’m not seen as a CA, when I’m not seen as a ResLife staff member,” Clarke said at the rally. “[ResLife staff] are always here to support you, and that’s really important to recognize. Admin is able to make decisions pass. So they recognize policies, tell us what to do, and then they leave at 5 p.m. They leave at 5 p.m. and they leave us in charge…. They don’t listen to us, and they don’t listen to our experiences and needs when they’re creating and implementing these policies.”

At the rally, ResLife student workers reflected on times they felt disrespected by the University administration. Yohely Comprés ’24 and Joshua Kleiman ’24 recalled taking a lunch break during first year move in on Wednesday, Sept. 1, 2021, after which President Michael Roth ’78 told their Area Coordinator that they were being lazy. Comprés highlighted the fact that most of the University’s student workforce is composed of students of color and first-generation, low-income students, so a comment calling them lazy holds a racial connotation.

Additionally, speakers at the rally underscored that many student employees rely on their jobs as RAs, CAs, and HMs to pay for their room and board fees. Without an increase in worker pay, their housing security is at greater risk when tuition increases.

“[It is] important to recognize that Wesleyan is proposing a 3.8% increase on residential comprehensive fees between this year and next year,” Clarke said at the rally. “Do you expect to see that difference represented in the pay of ResLife staff members? No. [Be]cause Wesleyan University understands the impacts [of] inflation when it comes to their money, but not when it comes to our lives and not when it comes to the ways in which they’re paying faculty, staff and their student workers.”

“It sucks to see your boss…not advocate for you in the way that you want and not take into account your experience as a worker,” Comprés said in an interview with The Argus.

Despite the lack of support from the administration, WesUSE has received much attention from Connecticut state politicians, with some speaking at the rally on Saturday, March 5. State Representative Quentin “Q” Williams explained that, as a former RA himself, he understands the emotional toll that such a work-intensive job entails. He promised to stand with WesUSE until the end.

“You’re doing [your jobs] out of love,” Williams said at the rally. “And I will say this…you can’t pay [for room and board] out of love. So let’s give the basic [needs that]  you’re asking for and the basic contract of what every single other RA has in this entire country. So I stand with you, I’m here [in] solidarity, and I will be with you to the very end to make sure that you get what you all deserve.”

At the rally, Florsheim shared about how his experiences as an undergraduate at the University contributed to his current perspectives on the importance of student workers and unions. Florsheim added that unions are essential to running both Middletown and the University.

“When workers are getting what they need, they’re great at their jobs,” Florsheim said at the rally. “The only way [workers and overseers] get what we both need, the only way that we are able to run a city successfully year after year [and] make this work for all of our residents, is when labor and management are on an equal level playing field.”

Additionally, WesUSE pointed to how poor worker treatment is a systemic problem that is not contained to just ResLife student workers. Connecticut State Building Trades Council Executive Director Joseph Toner emphasized this at the rally and explained how important unions are to the construction workers the University employs.

“[Michael Roth] refuses to meet with us, and he wants to continue to exploit construction workers on the campus, so when we found out about the fight for ResLife, it only makes sense for us…to come out here and support ResLife and their organizing efforts,” Toner said at the rally. “Thanks to the students, and the advocacy that you guys do…to make sure people are making a livable wage. It makes a difference. So we’re gonna in return support ResLife students through this whole process.” 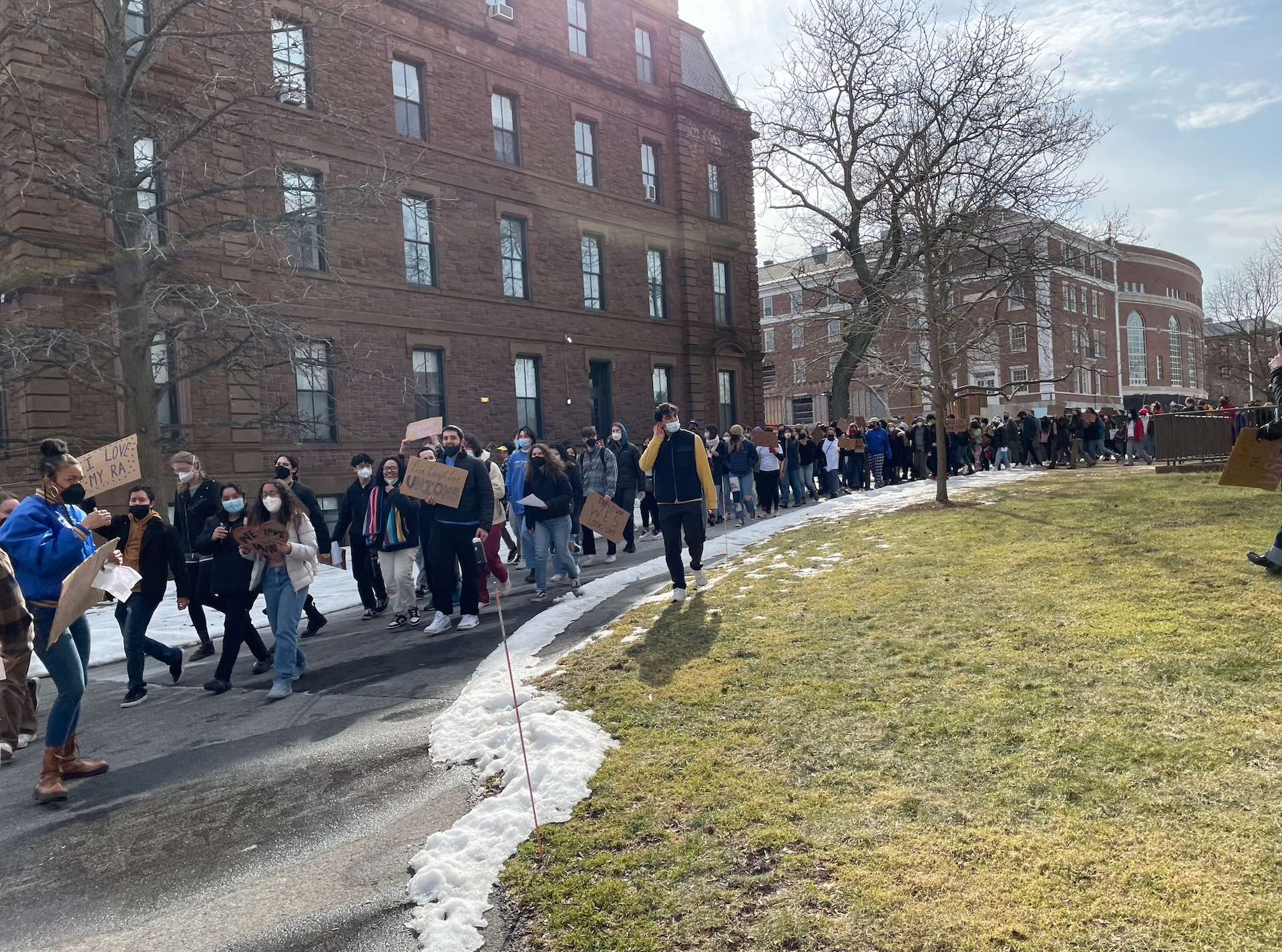 At the end of the rally, Ari Randall ’25 and Sam DosSantos ’25 led the crowd in a march around North College.

“Roth, Roth! Don’t be a sloth! Recognize us or fuck off!” the crowd chanted.

After the rally, WesUSE held a sit-in protest later that evening in Exley Science Center. On Sunday, March 6, the WSA voted to pass a pro-WesUSE resolution supporting the union, with 25 in favor, zero opposed, and three abstaining. Another WesUSE rally was also held on Monday, March 7 in front of North College while administration members were in the building.