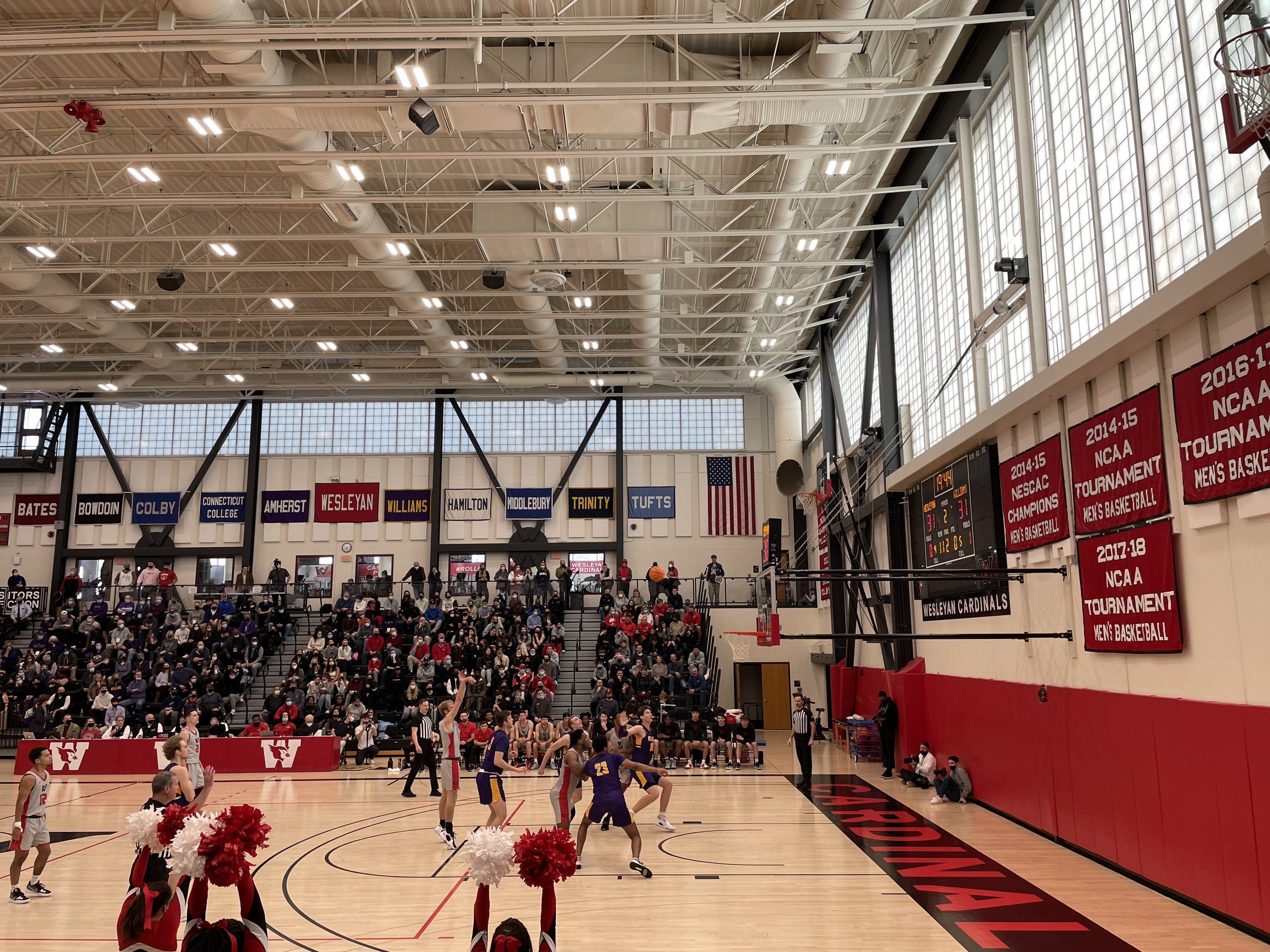 Wesleyan emerged victorious when the Cardinals pulled off an overtime win in front of a roaring Silloway Gymnasium on Sunday, Feb. 27. The win against Williams awarded the Cards the second NESCAC Championship in program history. Prior to the NESCAC tournament, Wesleyan had enjoyed their most successful regular season in team history (21–3, 9–1 NESCAC).

In a previous interview with The Argus, star Sam Peek ’22, who was awarded Wesleyan’s first-ever NESCAC Player of the Year award for basketball, stated that winning the championships was the team’s expectation. However, expecting a championship and realizing that championship are two entirely different tasks.

Kicking off the NESCAC tournament, Wesleyan faced off in the quarterfinals against No. 9 Colby, who held the score even at half but were soon outmatched, with the Cards scored 50+ points in the last 20 minutes to win the game 82–71.

Going into the semifinals, the Cards faced off against underrated No. 7 Trinity, who were plagued by COVID-19 and struggled to maintain a truly representative regular season record. The match stagnated with an even score in the last five minutes, toying with fans’ nerves until Wesleyan’s Preston Maccoux ’23 sank a three-point dagger in the final two minutes, sealing the game at 70–67.

Heading into the final against No. 4 Williams, Nicky Johnson ’25, a first year phenom, highlighted the atmosphere of the event.

“Going into the game, we were confident and excited to play Williams,” Johnson wrote in a message to The Argus. “We knew the game was going to be a battle from start to finish, but it was a challenge we were ready for.”

“During the game, I didn’t really have a clear line of thought until half-time, when I realized we hadn’t played nearly our best basketball yet and were only down 2 at half,” James wrote in a message to The Argus.

The first half of the NESCAC final felt like watching a teeter-totter: every time Wesleyan went up by a few points, Williams would come back and retake the lead, and vice versa. The highest lead the Cards enjoyed was just three points, and Williams barely topped that, with their highest lead being five points. At the end of the half, Williams led Wesleyan 31-29, a relatively low score considering that Wesleyan averaged almost 84 points a game during seasonal conference play.

In the second half, Wesleyan found themselves down by one in the last minute. Luckily, Peek hit a game-tying free throw in the last 38 seconds. The next possession was excruciating. Williams brought the ball down, shot and missed a go-ahead three, but then grabbed the offensive rebound. Williams again attempted a three-point game winner, but the ball clanked off the rim. James then grabbed the defensive rebound, sending the two teams into overtime.

In overtime, Johnson and James led Wesleyan’s attack and traded blows with Williams. Each team was hitting their shots with such consistency and confidence that it seemed that just one miss would be a season-ender. Overtime play started off with a great defensive recovery by Peek, who, after initially getting beat, caught up to his man for a chase down block. Williams recovered the offensive board and got an easy put back layup. But that didn’t deter the Cards as they responded with a monster alley-oop from Johnson to James. Next, James continued his paint dominance with a block on the other end, leading Johnson to come up the floor and hit a step back three in the face of his defender. The game swayed back and forth. A tough fade-away midrange from Gabe Ravetz ’23 and two free-throws from Maccoux secured the lead for Wesleyan at 73–72, which was added to the next possession by an acrobatic layup from Johnson against two taller players.

When asked what gave him the confidence to make two difficult shots and lead Wesleyan in OT scoring, Johnson pointed to the effect that his teammates had on him.

“They have given me so much confidence and pushed me to take charge and take those shots down the stretch of the game, and it’s helped me come into my own,” Johnson wrote. “I struggled a little bit in regulation to get going, but I came into overtime with confidence that my shots would start to fall, and luckily they did. I [get] so caught up in the game and on what play I am going to call or decide I am going to make that it helps me in a way to not get nervous, especially in OT.”

The game ended in a historic Wesleyan victory at 78–75 after Williams missed a final Hail Mary attempt. The crowd erupted, and the players stormed the court, looking towards the net to see which piece they wanted to cut down and the wall to see where their banner would hang.

“Post-game was just pure elation for the whole team, coaches, and parents who all sacrificed so much over the last two years to make a moment like that,” James wrote.

James ended with 18 points and 13 rebounds in 39 minutes, while Johnson finished with ten points, four steals, and seven assists in an astounding 43 minutes out of 45 minutes of play time. Maccoux also tacked on 18 points in 41 minutes.

Yet, even with the NESCAC Championship in the bag, Wesleyan is not quite done. On Friday, March 4, the Cards will host Husson University at home in the first round of the NCAA tournament. If Wesleyan can pull off the win, they will host a second game the next day on Saturday, March 5.

The team is already looking ahead to the quick turnaround from winning the NESCAC Championship to beginning the NCAA tournament in just five days.

“The pivot happens quickly, but it’s a necessary one,” James wrote. “We enjoyed the win on Sunday and in watching the selection show on Monday, but now it’s time to get back to work.”

The team’s three leaders—James, Johnson, and Peek—all believe they can make a run into the NCAA tournament. If the Cards fall right, they hope to carry home a second championship banner this spring. With coach Joe Reilly winning NESCAC Coach of the Year, the team has very few weak spots and will be a tough matchup for any team. So, if you can, come out and support the Cards in their bid towards a National Title on Friday at 7:40.p.m. Let’s go, Birds!