The Generosity and Limitations of “Booksmart’s” Progressiveness 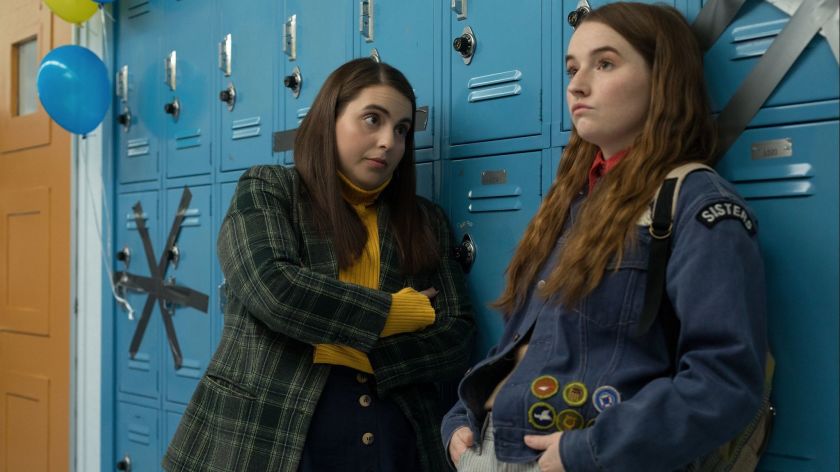 Sometimes people with the best intentions end up making fools of themselves. That’s definitely what happens in an early scene in “Booksmart,” the film showing at the Wesleyan Film Series later tonight. Molly (Beanie Feldstein ’15) and Amy (Kaitlyn Dever) are best friends finishing up their final day of high school. While their classmates who are reveling in their final days together by partying non-stop, Molly and Amy are decidedly low-key. The straight-laced duo spend their time finalizing end-of-the year budgets and diligently planning their career tracks; their idea of a fun time is watching the Ken Burns “Dust Bowl” documentary. The duo is “book smart,” but it’s also clear that their intelligence connects them to a larger world: Molly’s going off to Yale with dreams of becoming the youngest justice ever on the Supreme Court, and Amy’s heading to Columbia after a summer in Botswana helping women make their own tampons.

As you can probably tell by their career goals, Molly and Amy are definitely living in 2019. As distinctly Gen Z women, they’re basically paragons of liberal wokeness. Molly’s room looks like a shrine to feminists including Michelle Obama, Gloria Steinem, and Ruth Bader Ginsberg; Amy’s Volvo car is adorned by bumper stickers reading “Resist,” “Elizabeth Warren 2020,” and “Hot Flashes Are Power Surges.” Even though the duo seems super politically engaged, they’re also young, and kind of clueless about how their hyper-aware liberalism functions in real life. Case in point: an uncomfortable yet delightful scene between Molly and Amy, after Amy has an awkward interaction with her crush Ryan (Victoria Ruesga). Seeing Amy’s disappointment, Molly tries to hype her up.

“Amy, do you know how many girls are going to be up your vagina at Columbia next year? Are you aware of it? Cause I’m aware of it,” Molly says emphatically. “Every time I go and visit you you’re going to be scissoring a different girl.” Unphased and even used to this brash language, Amy shoots back, “Dude, scissoring is not a thing.” Despite Amy’s protests, Molly keeps stating: “Don’t knock it until you’ve tried it,” insisting that her anxiety-ridden friend fully claim her lesbianism.

When I saw this scene in theaters, the audience laughed along at the ridiculousness of the situation. But who was being laughed at? Even more than the humor achieved by placing a rambunctiously sexual friend against a nervously shy one, I had the sense we were laughing at Molly: her good intentions were making her act foolishly. Molly’s unabashed acceptance of her best friend’s lesbianism was so extreme that it became problematically assumptive. I was reminded of a line from the television show “Broad City,” which also focused on a modern female friendship: “You’re so anti-racist, sometimes, that you’re actually really racist.” Molly’s so pro-gay that she becomes accidentally homophobic: a hilarious, but revealing, moment for an audience to witness. The pair clearly love and support each other, but are sometimes blind to their own naïveté.

It was at this point in the film that I wondered how “in” on the joke “Booksmart” itself was. Did Olivia Wilde, the film’s director, know how rudely invasive it was to talk about scissoring to lesbians? Or did she understand that fact so well that making Molly repeat it in the name of female solidarity was her own form of satire? I think ultimately “Booksmart” gets it, and is in on the joke; the film hopes to affectionately satirize the progressivism it preaches. But in the process of lightly skewering its female leads, “Booksmart” also ends up undermining itself. Too many times we’re laughing at the foolishness of Molly and Amy’s progressivism, when the film really wants us to sincerely root for their third-wave feminist agenda.

The rest of the film follows Molly and Amy when their feelings of superiority over the rest of the student body takes a significant blow: turns out the duo’s party-going peers aren’t just the “stupid jocks” or “mean girls,” and got into the same prestigious colleges that they got into. When confronted by this fact by the popular Anabelle (Molly Gorden), Molly is in shock. “This isn’t possible. You guys don’t care about school.” “No,” Anabelle replies patronizingly, “We just don’t only care about school.” With this rude awakening, Molly and Amy are determined to rehabilitate their reputations and get even with their peers: to have a wild night partying before graduation in the morning. We watch them as they jump from party to party, each more surreal than the last, hoping to prove their worth not only to their peers but also to themselves.

The fact that the premise is so academically focused feels distinctly modern. Long gone are the laid-back afternoons of “Dazed and Confused,” or even the everyday trials and tribulations of something like “Sixteen Candles.” Everyone in “Booksmart” is ruthlessly ambitious and hoping to change the world, especially the Barcelona-travelled theater kid George (Noah Galvin). But this is even true of the seemingly chill Theo (Eduardo Franco) who turns out to be a coder for Google, and Tanner (Nico Hiraga) who reveals that he’s playing soccer for Stanford. Molly seems to be particularly rattled that Theo and Tanner could so easily breeze through high school at the top of the social pyramid, and still end up having great lives afterwards. It seems like an injustice of epic proportions: how could these seemingly male douche-bags earn the same as women who have sacrificed their social lives for their success?

But Theo and Tanner’s male privilege is complicated by the fact that they’re both played by actors of color. “Booksmart” is actually full of people of color, from the supportive teacher Miss Fine (Jessica Williams), to Molly’s secret crush Nick (Mason Gooding), to George’s fabulous friend Alan (Austin Crute). A film more grounded in reality and self-aware than “Booksmart” would probably include conversations of race and class into its discussion of college admissions: Aren’t some of these people legacy admits? Aren’t some of these people on scholarships or tuition? But “Booksmart” only follows the realization of Molly and Amy, two relatively privileged white women, that everything isn’t fair for them. Imagine, for a second, if either one of the actors were played by a Black woman or Asian woman; suddenly, the film’s central premise falls apart. Too many women of color are conditioned to work twice as hard for the same amount of reward, and wouldn’t be so outraged to see their peers succeed and to have their hard work be seemingly invalidated through arguments about “unfairness” of affirmative action.

But their social immaturity sometimes extends to their intellectualism—especially their feminism. Despite being surrounded by people of color, and even having “Black Lives Matter” signs in their rooms, Molly and Amy’s brand of identity politics only seem to include people of color when they need to be hyped up (or even when they need a makeover, as when Miss Fine arrives to take them to a party lets them wear her clothes). When Molly calms Amy down with the phrase “Don’t worry about it, chica,” she’s feigning a kind of Hispanic cool that clearly doesn’t belong to her. Are we supposed to laugh at this kind of subtle appropriation just because it’s unexpected coming out of the mouth of a nerdy white woman? Especially dubious are the three slow-mo montages that happen throughout the film, including Molly and Amy doing mundane things (dressing up in outfits, going to the library, driving to graduation) all set to intense trap music. What makes these sequences cinematically great is that they’re playing in extremes that seem like they don’t go together—it feels surreal, and is honestly funny. But do Molly and Amy have to adopt Black culture in order to feel confident about themselves? In the world of teen movies, if “Eighth Grade” is the shy girl listening to Paramore and “Lady Bird” was unafraid to unironically jam out to mainstream rock, “Booksmart” is definitely the white girl blasting Lizzo. I’m glad they feel confident, but the lack of self awareness can be frustrating.

But here’s the thing: even though I’m laughing at the strained progressivism of Molly and Amy, I’m still laughing. “Booksmart” is an incredibly entertaining movie, complete with hilarious set pieces and filled to the brim with memorable characters. The truth is, the film wants us to root for Molly and Amy’s identity politics and laugh at them at the same time. But even the ability to satirize progressivism is a kind of privilege. Although the film never explicitly names where it’s set, it’s pretty clearly shot in California—and the world seems to be a haven of intellectualism and wokeness. Wilde strings some pretty funny jokes out of the fact that even the popular kids are socially astute: the perpetually trying-too-hard Jared (Skyler Gisondo) tries to impress Molly by playing a feminist podcast, stating that “I like to hear the words of powerful women before I party to remember the respect and awe you ladies deserve.” But never once do any of the characters actually confront people with conservative ideologies or ones that fundamentally oppose them. This high school may jokingly make fun of gender-neutral bathrooms, but they’re not making fun of actual trans people.

I wish my high school looked like that. It’s even kind of fun to live in that kind of self-referential liberal bubble for a while: “Booksmart’s” screenplay still feels like an Obama-era holdover, a hazy place where sexism, racism, and homophobia are fought against but never explicitly felt, or put into direct conflict. If Molly and Amy were born 20 years ago, or even just lived in the Midwest or South, they might end up looking a lot more like “Election’s” Tracy Flick (an iconic character immortalized by Reese Witherspoon), whose feminist ambition is truly fascinatingly thwarted by her own pretension combined with her small town’s close-mindedness. “Booksmart” making fun of its own progressiveness is only possible because it has created a progressive world onto itself.

I can’t be too mad at “Booksmart,” because it’s on its own joke, and is constantly satirizing the progressivism it advocates. And making fun of yourself is a generous act. But there are limitations to pointing out your flaws, because you’re not changing them. I wish “Booksmart,” instead of making fun of its naive lack of intersectionality, had just gone ahead and been intersectional.