“A Body in Fukushima” Beautifully Re-Creates a Painful History 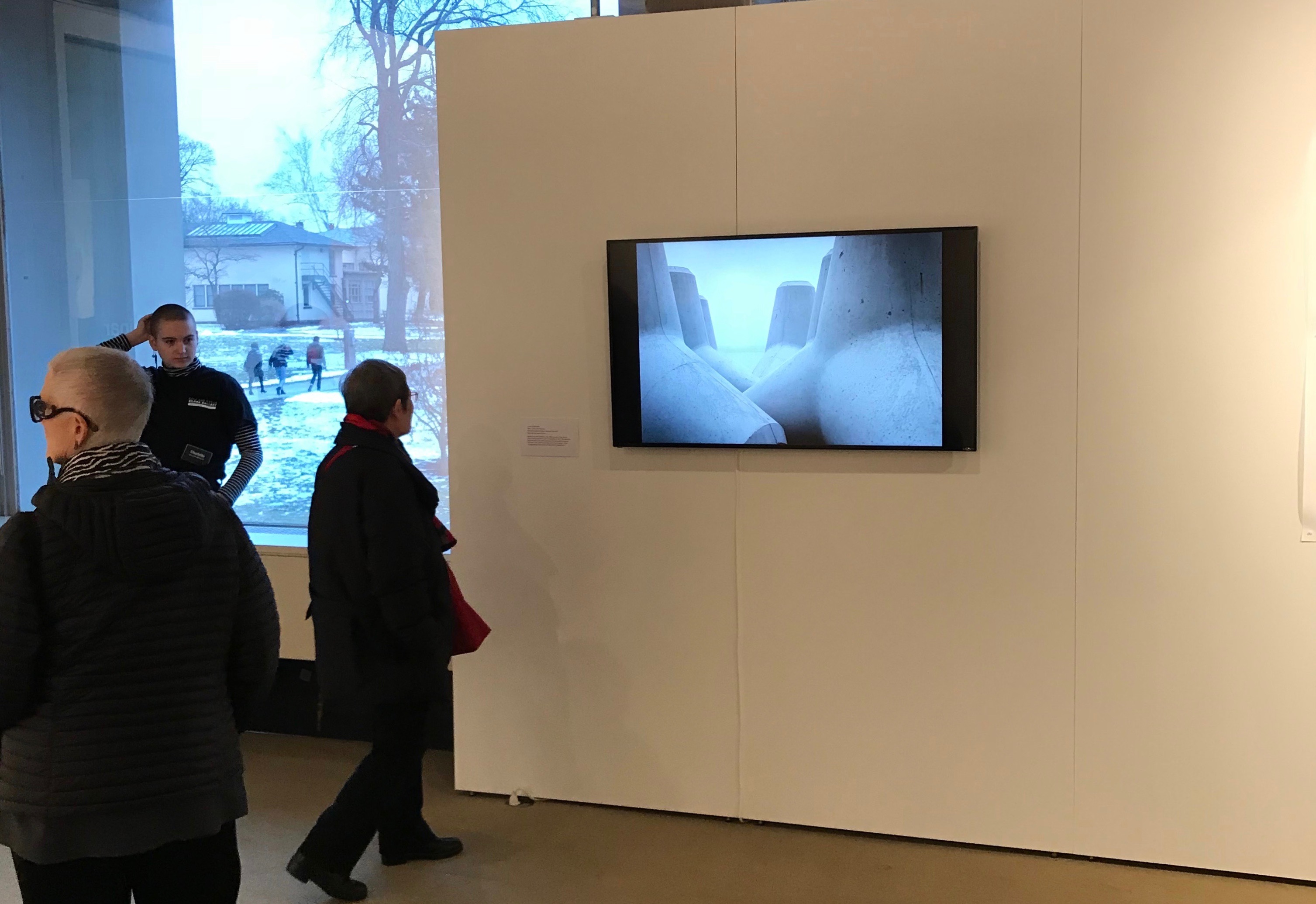 Eiko Otake’s choreography is both bold and theatrical. How then might she translate this theatricality and choreography into “A Body in Fukushima,” a series of photos featuring her in the Japanese city ravaged by an earthquake and a nuclear meltdown in 2011? Her collaboration with photographer William Johnston tackles that question in a lot of ways and pushes the idea of performance in a beautiful installation.

Eiko, a distinguished visiting scholar in the College of the Environment, has performed her piece in a host of colleges and other venues including prestigious art galleries. “A Body in Fukushima” is a part of a larger series called “A Body in Places.” The series began with a twelve-hour performance at a train station and evolved into a commentary on the body in space. She has won many prestigious awards for her artistic work, which include Guggenheim and MacArthur Fellowships. Her collaborator William Johnston is a Professor of History at Wesleyan who specializes in Japanese history.

Eiko seems to dislike the fixity of photography. She states that looking good in photos is not her mission and her interest is in performance. One method she adopts to present her art is a slideshow of Johnston’s pictures. The arrangement and procession of photos mirrors the momentary nature of live performance.

Eiko has also incorporated performance in the piece by dancing in front of the pictures. When staging “A Body in Fukushima” at the Metropolitan Museum of Art, she projected the images on the walls while she performed choreography in front of them.

“By using the maximum amount of time allowed to me and not repeating a single image, I hope my video will ‘stain’ the museum walls, making them absorb as much of Fukushima as possible,” Eiko writes on her website.

Eiko’s staging serves as a critique of the impersonal remove of the museum. Her body connects the audience to reality and 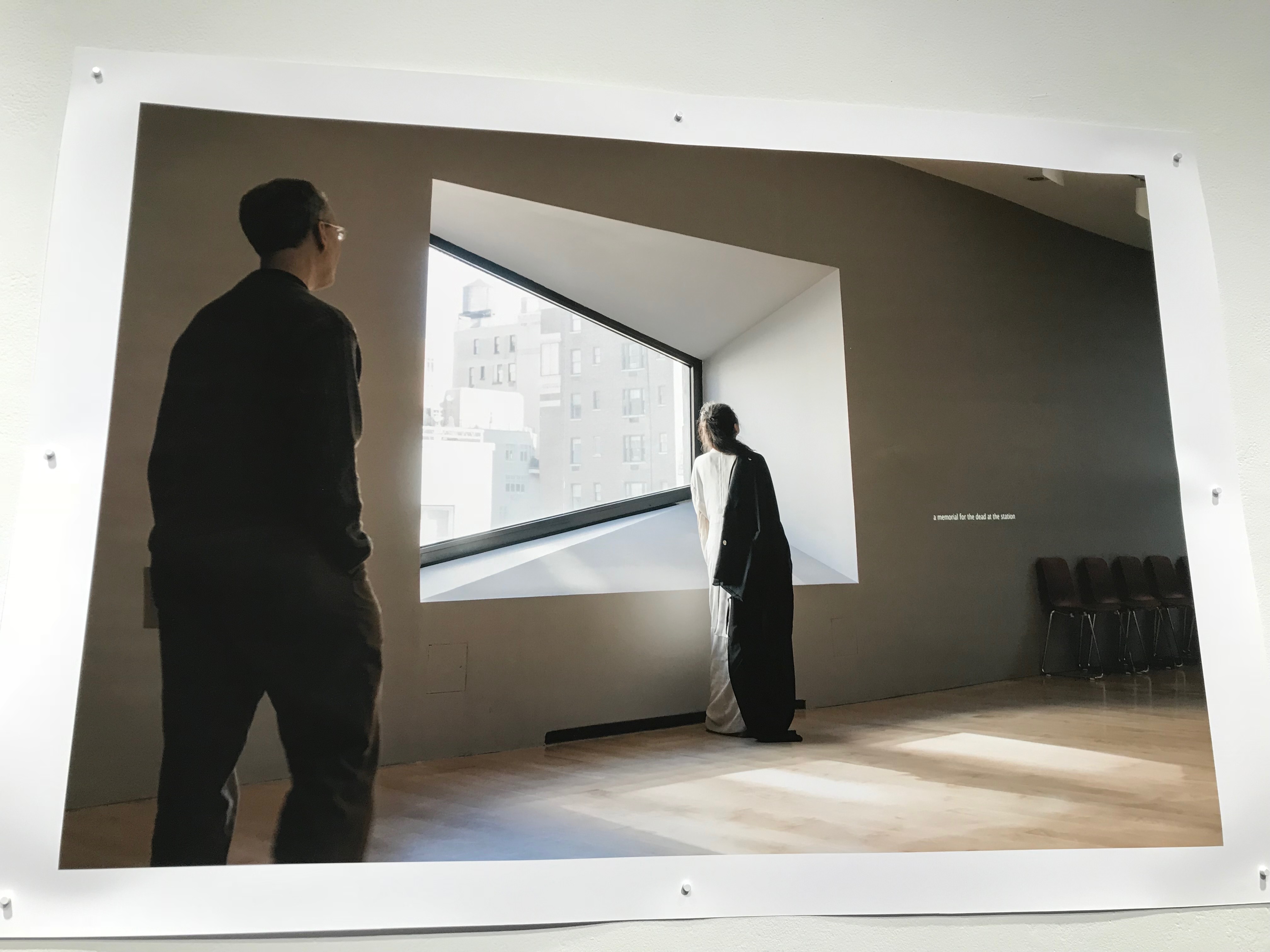 converts the background image into present reality. The comfort of physical and emotional distance from Fukushima is gone in a production like this.

“The photograph is a performance itself,” suggested Johnston.

Johnston’s interpretation of performance is evident; the photographs of her in Fukushima certainly retain the performance aspects of her dance. The average person may imagine frozenness when they think of photos, but the images of Eiko contradict this notion.

One image of Eiko features her on a desolate beach. The beige sand under her feet blends into the grey sky above her. The background is dull and dark, but Eiko stands out, dancing with her clothes flowing in the wind. The fabric, falling behind her dancing body, and the wet sand flying off her feet captures motion in a still image. On the bluff behind her, several cranes are barely visible, marking the spot of the nuclear disaster.

Johnston describes Fukushima as a place in transition but still injured by the past. The vivid photos demonstrate this well. Fukushima is a place that still exists but appears forgotten. One photo shows Eiko dancing in front of a building that crumbled under the earthquake. The dullness of the ruins emphasizes Eiko in the foreground as an embodiment of the pained but living spirit of the city. It takes a while to notice the overturned washing machine in the house, forgotten like much of history of disaster. But the photos have a calmness to them in the performer and the color palate that draws viewers in and forces them to confront a past that is painful or not directly connected to them.

The photographs have a hurtful beauty to them that matches the yearning that impelled Eiko to travel to Fukushima in the first place. Johnston was correct in the performance of the photograph; each tell a story and capture a mood.

“The past exists only in the present as we continually recreate it,” Johnston writes in the performance description.

These pictures tell a history of Fukushima in their composition and subject.

Eiko integrates different media in “A Body in Fukushima,” including photography, theater, and of course dance. The result is a work that pushes the notion of performance and calls the audience to confront a painful past. She and Johnston re-create history with innovation through their use of gorgeous and somber imagery.

“I’m interested in how knowledge gives us a sense of awe that we all need,” Eiko said.

Her performance certainly matched her interest.

Connor Aberle can be reached @caberle@wesleyan.edu.