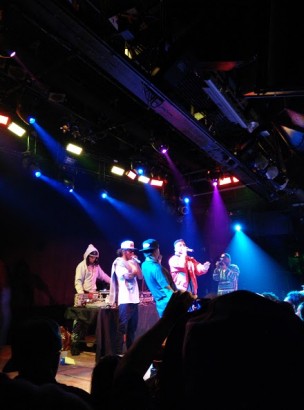 As a cry of “threes in the air” echoed through the cozy confines of New Haven’s Toad’s Place, Ab-Soul emerged amidst a hazy cloud of weed smoke and neon green lights, rocking his customary black tinted sunglasses with his typically unruly fro tucked neatly beneath a Duke Blue Devils snapback.

An eclectic mix of hip-hop heads and gangly teenagers, many of whom had formed a line outside hours before doors opened, roared after waiting through three opening acts for Ab-Soul to take the stage at 11:15 p.m. While Dreamville Records signee and J. Cole-affiliate Bas, along with local rapper Kid Dop3, did an admirable job of holding down the crowd, it was clear by about 10:30 p.m., after several deafening “Soulo” chants, that it was about time for the so-dubbed “Black Lip Pastor” to take the stage. Ab-Soul’s hype man and DJ, T1, hopped onstage to rile the audience up, and the rapper himself nonchalantly slinked up to the slightly elevated platform as if it were not even his own show, carrying a red solo cup. As he surveyed the crowd, he smiled. “New Haven, what the fuck is up?”

Ab-Soul sits at a crossroads in the hip-hop landscape. On the one hand, he is a part of Top Dawg Entertainment (TDE for short), the record label chiefly comprised of Kendrick Lamar, Schoolboy Q, Soul, and Jay Rock, which has taken the industry by storm the past two years. The self-dubbed “Black Hippy” crew cut their teeth on the underground rap circuit in Los Angeles until, after years of accumulating critical acclaim and a loyal following, they were pushed into the consciousness of mainstream rap with the release of Kendrick’s classic Good Kid, M.A.A.D City in 2012. In 2014, after Schoolboy Q released Oxymoron, buoyed by hits such as “Collard Greens” and “Man of The Year,” TDE President Punch promised the label would drop six projects this year, priming Ab-Soul to be the next Black Hippy to ascend to rap’s throne. In June, Ab-Soul released his major label debut, These Days, and while the project was met with general approval, it failed to resonate as deeply with its audience as Good Kid and Oxymoron, or to cross over into rap’s mainstream.

It is primarily because Ab-Soul refuses to conform to major label pressure and to drop radio-ready singles that he has been unable to catch up to luminaries such as Kendrick and Schoolboy, whom he once surpassed in appeal. This leaves Ab-Soul with the delicate choice of continuing to cater to a loyal following that can barely pack the intimate Toad’s Place, or push to join his TDE counterparts. But following the path of Kendrick or Schoolboy does not necessarily mean sacrificing artistic integrity for record sales. Both artists have been able to create music that satisfies at both a creative and commercial level. Rather, it is Ab-Soul’s apparent unease in adapting his style so drastically as to appear chameleon-like and lose his most important asset (a reputation as a technically superior rapper) that causes him to refrain from a drive towards mass recognition.

All of this bubbled just beneath the surface during the opening of Ab-Soul’s set as he furiously ripped through a series of hits from his fan-favorite first project, Control System. During “Terrorist Threats,” Ab-Soul led the entire crowd in a chant of “kick your game, spit your flow, can’t fuck with this Top Dawg shit though.” “Pineal Gland” and “Track Two” established a trippy and almost chilling atmosphere at times. T1’s manipulation of machine-gun-esque 808s into a harsh cacophony of sound prompted Ab-Soul to ask, “We scaring any of you guys yet?”

Ab-Soul has an impressive catalogue of guest appearances on the hits of slightly more established artists—something that he integrated effectively into his live performance. The audience, which regularly rapped along word-for-word verses, became most animated during performances of Chance The Rapper’s “Smoke Again” and Schoolboy Q’s “Druggy Wit Hoes Again.” Ab-Soul’s ability to mesh the work of his colleagues with his own set provided the crowd with a shot of energy at key points in in the concert. House of Pain’s “Jump Around” swirled into Kendrick’s “Backseat Freestyle” in a dizzying display that helped form a context for the space Ab-Soul’s own music occupies in the minds of rap fans.

Introducing the second half of his set, Ab-Soul did his prerequisite investigation of who had listened to These Days, presiding of his performance of “Days” with a workman-like attitude. “Dub Sac,” “Tree of Life,” and “Stigmata” allowed Ab-Soul to flex his loquacious wordplay, and his recital of “Hunnid Stax” literally caused the floor to shake. Audience members who were unable to keep up with the rapper’s dexterous flow had an easier time digesting Mac Miller’s monotonous but catchy hook.

When it was clear that Ab-Soul’s act was winding down, he brought one lucky audience member on stage to freestyle; after rocking the mic for several minutes, the newly recognized rapper began to hand out CDs from his back pocket and shout for a Twitter follow. Ab-Soul closed with “The Book of Soul,” an introspective number that united fans of both his projects. While it is unclear whether Soul will strive to be in the same conversation as his label mates, he was obviously very comfortable at Toad’s Place, spitting for an audience that reminded him that, as he says in “Tree of Life,” “I’m the solution, salute me, absolutely the best.”