In the fall, The Argus reported on the NCAA policy change which allowed student athletes to receive compensation for the use of their name, image, or likeness (NIL). One Wesleyan student-athlete has been raising awareness of these new opportunities among athletes of all levels. Gabe Ravetz ’23, a shooting guard for the 2022 NESCAC Champion men’s basketball team, spends his off-court hours working as a NCAA Growth Lead at Obsesh, an online platform which connects athletes with users seeking real-time coaching in a particular sport. Obsesh’s business model, which hinges on hiring college athletes, has been made viable by the NIL rule change. The Argus sat down with Ravetz to discuss his experience at the company and his work publicizing this new frontier for student athletes. 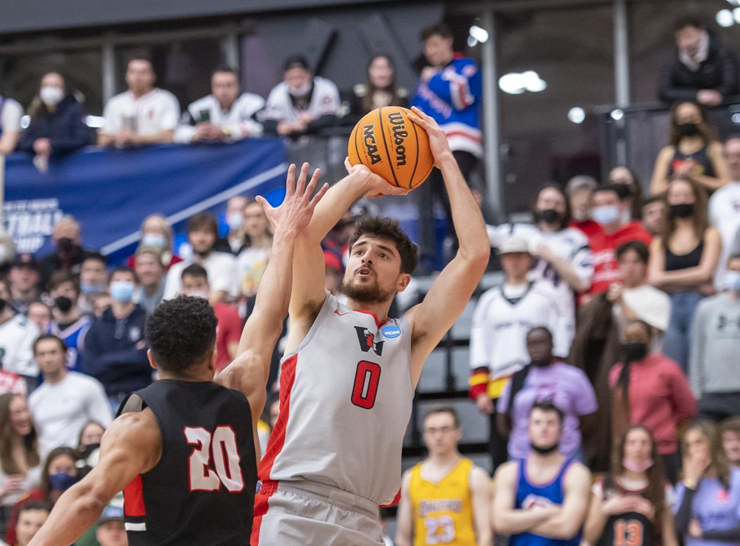 The Argus: When the NIL ruling came down this past summer, what was your immediate reaction to it? Did you anticipate looking for these kinds of opportunities for yourself right away?

Gabe Ravetz: My immediate reaction is: this is long overdue. The idea that we’ve had to fight for a ruling or pass a law that allows athletes to make money off their own name, image, and likeness is kind of a funny idea. But obviously, you know, the NCAA has had control over that for so long.

So that’s my immediate reaction. I think the follow-up to that is, “Okay, how does this take shape? What does this look like?” And you know, I certainly saw the potential for athletes to be getting these deals. It’s a funny thing because it’s always changing, and what we’re looking at today is not what we were looking at then.

GR: So Obsesh is a platform for athletes to connect with their fans through short form, personalized coaching videos. If you know the platform Cameo, which is like a virtual autograph, this is the same idea, but it’s sports-specific feedback. So instead of asking your favorite NBA player for a happy birthday shout-out, you ask your favorite NBA player for feedback on your shooting form.

A: So I don’t know if Steph Curry’s on here, but theoretically, you could ask Curry for help on your stroke?

GR: Exactly, exactly. That’s the idea. So I actually got involved with them through a Wesleyan basketball alum, Scott Moore ’99. We developed a great relationship, and he had a connection to [Obsesh’s] CEO, Tracy Benson. I spoke to her, we kind of just hit it off, and I accepted a full-time position with them at the end of this past summer. And now my technical title is “NCAA Growth Lead.” So my job is to bring awareness of Obsesh to NCAA athletes, and I’m putting together a scouting program where we are going to be having mostly student athletes, but not limited to student athletes, going across the country recruiting other athletes to get onto Obsesh.

A: So are you more geared towards recruiting professional athletes or just recruiting college athletes at all levels?

GR: We do athletes of all levels. I personally am focused on NCAA athletes, so DI, DII and DIII.

A: This is an opportunity that wouldn’t have been possible before the NIL deal, because you are paid for your services?

GR: Exactly, and [Obsesh’s] thinking in founding this company was under the assumption that one day they’d be able to monetize under the idea of NIL.

GR: The first thing we talk a lot about is understanding your niche and understanding your audience. So like we talked about earlier, if you’re a college athlete at Wesleyan University, going to Nike and asking for a hundred thousand dollar NIL deal might not be the best option.

GR: [Laughs] Exactly. But there’s tons of local stores and local restaurants. Like Mondo, Neil’s Donuts, all these other stores that are local to Middletown. And they can use that advertising. We might not get a hundred thousand dollars, but whatever it is can put some extra money in your pocket and help you build leverage off of that audience you have as a college athlete.

A: So playing at Wesleyan, it doesn’t have the same national reach as playing at Alabama or Duke, but it’s about knowing where that reach is, how far it goes, and looking for opportunities within that bubble?

GR: Definitely, and I think the other piece of that is actually reaching out and initiating those opportunities. I think a lot of athletes are kind of waiting around: “Oh yeah. I’d love to do an NIL deal, but nobody’s reached out to me.” But most of the time, store owners or managers are thinking about a hundred other things, and they’re not thinking about how to get a college athlete to advertise for their restaurant. But if you reach out to them, they might say: “You know, for 100 bucks, 200 bucks, I’ll sponsor you to post on your Instagram and advertise for us.”

A: So you just touched on this, but I was going to ask if you think the more limited platform of a student athlete at a DIII school should serve at all as a barrier to entry? How can student athletes compensate for a lack of audience?

GR: It’s all about understanding where you fit in. For example, there’s this guy that was always popping up on my explore page, @fitwsean. He’s like a DII basketball player, I think [at] Pacific Lutheran…. Nobody knows where that school is, but he’s built a following on his Instagram, and, because of that following, I’m sure he’s getting these NIL deals. That’s not to say that you have to go that route because even if you have a hundred followers, there’s still some sort of audience, people are still coming to your games, people are still seeing you play. There are still people in the stands who know who you are, that you don’t know who they are. So it’s all about understanding who your audience is.

GR: I would say: “Think about yourself as an entrepreneur.” There’s so much that you can do beyond just your sport, and it’s about finding those opportunities. If you want, those opportunities are out there, but they’re not going to fall in your lap. You have to understand where to look, who to ask. You might have a 95% failure rate when you’re going out and looking for those opportunities. But if it’s important to you, that 5% success rate is going to make a difference for you. It’s going to put that extra money in your back pocket. And beyond that, in positioning yourself for life after school, you can always make new connections at really any level.

That’s how I would pitch it. And I would also say to think outside the box. We have student athletes right now who are serving as Scouts for us, and the idea is that they’re being recruited. We’re recruiting them to recruit for us because of the network that they have, so they’re effectively monetizing their network in the form of commissions. Which isn’t the same as getting paid for a sponsored post, and it doesn’t necessarily fall under the NIL umbrella, but it’s the idea that you have a certain value, and whether that value is you as an athlete or the network that you have as an athlete, people are willing to pay for that, because people are watching you.