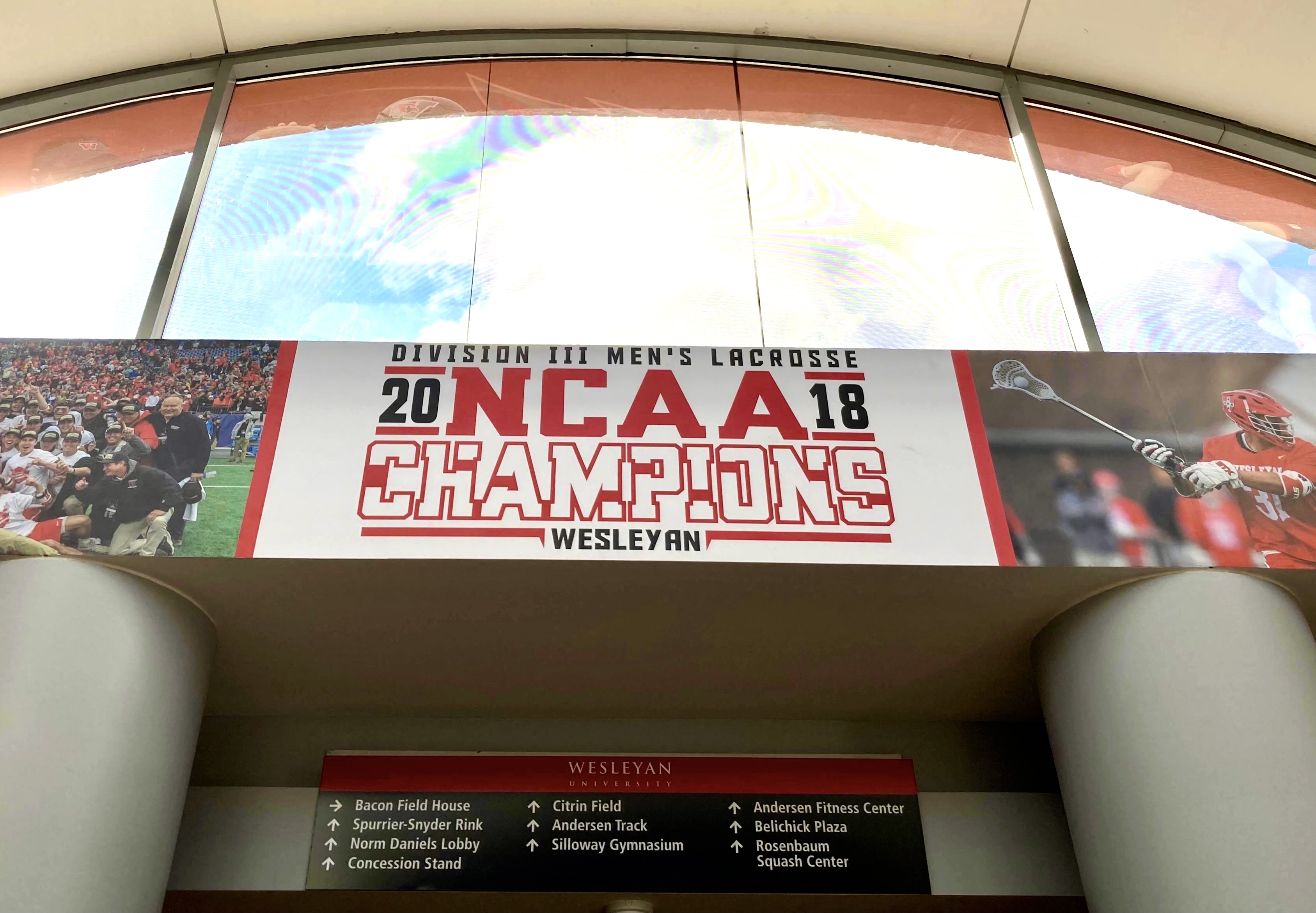 A member of the Wesleyan field hockey team on the window of Mondo? A Cardinals’ women’s tennis player encouraging you to pick Price Chopper over Aldi? A key cog of the Red and Black’s men’s lacrosse program standing outside and waving you into Metro (Movies)? Under new National Collegiate Athletic Association (NCAA) guidance, all of these scenarios are now, hypothetically, possible. College athletes are now permitted to market their name, image, and likenesses (NIL), opening the door for thousands of students, including Wesleyan student-athletes, to begin earning profits through sponsorship deals with private businesses.

For decades, one of the most hotly contested issues in collegiate sports was the issue of amateurism. Under long-standing rules by the NCAA, the governing body for most college athletic programs in the United States, students were forbidden from receiving any financial compensation for their status as college athletes, whether through direct payment by their university or by marketing themselves to commercial sponsors.

Now, however, the NCAA’s persistence in maintaining a strict definition of amateurism among its athletes might finally be starting to crumble. On June 21, the Supreme Court unanimously ruled that universities cannot cap education-related benefits for student-athletes, with Justice Brett Kavanaugh suggesting in a concurring opinion that future challenges to the NCAA’s compensation rules may find a receptive ear at the nation’s highest court. A little more than a week later, the NCAA stated that student-athletes who sell their NIL for commercial or promotional purposes would not forfeit their eligibility under the organization’s amateurism regulations. By doing so, the NCAA preempted laws in 13 states that would have similarly allowed student-athletes the right to commercialize their NIL beginning in July 2021.

The NCAA’s decision was undoubtedly intended to placate the demands (and head off future antitrust challenges) of student-athletes in major Division I conferences, such as the Southeastern Conference (SEC) or Atlantic Coast Conference (ACC), who regularly play in front of national TV audiences and could command thousands of dollars in sponsorship deals in an open market. However, the NCAA simultaneously allowed NIL deals to commence in all three divisions of play, forcing every athletic program from Clemson University to Conn. College to begin preparing institutional policies and guidelines for students interested in pursuing opportunities with their name, image, or likeness. Wesleyan has been no exception; the Athletics Department website now features a link to the NCAA’s interim policy.

Frank V. Sica Director of Athletics Mike Whalen ’83 commented on the University’s response to the new environment in college sports.

“The natural reaction is, ‘Hey, you know, we’re not the quarterback from Alabama who’s getting an $800,000 deal,’” Whalen said. “But that being said, it can’t be on the other end of the spectrum where you just keep your head in the sand and you say, ‘Oh, this doesn’t really apply to me,’ and then all of a sudden one of your star athletes has been approached by a local business and they think that they’re doing everything right and they don’t know the regulations of the NCAA.”

While student-athletes will have more control over companies’ use of their name, image, and likenesses than ever before, they will still need to observe University policy, which limits financial compensation, when entering into any prospective deal. Any compensation students receive must be unrelated to athletic activity, Associate Athletic Director Kate Mullen explained. In other words, students cannot be directly paid for athletic performance.

Mullen, who serves as the University’s NCAA compliance officer, also emphasized that students will be prohibited from using any of the University’s trademarked properties, such as its name, logo, or uniforms, when acting on behalf of a private business. As a result, both Mullen and Whalen encourage students interested in getting a sponsor to speak with the Athletics Department beforehand.

According to Mullen, no students have approached the University with any prospective NIL deals yet.

“All our fall student-athletes are in their season, so of course they’re focusing on, as we say, ‘academics is first, and then 1a is their sport,’” Mullen said. “And you know, winter and spring student-athletes, they’re preparing for their season…because it’s new legislation, I think [NIL interest] will increase as the student-athletes become aware of it.”

In addition, students will be prohibited from entering into a NIL deal with a business whose actions would violate University policy.

“As you read the policy in our student-athlete handbook, one of the parts of the policy is making sure that whatever your employment activity is, or endorsement contract, [that it] is one where the companies, the brands, the products, the conduct, or the entertainer are not prohibited on University policy or by a university directive,” Mullen said.

Despite the regulations student-athletes must keep in mind, both Whalen and Mullen stressed that the University’s most important responsibility in regards to NIL opportunities is protecting the eligibility and economic well-being of student-athletes. In this way, the Athletics Department hopes to be a partner, not an obstacle, to student-athletes interested in potential sponsorships.

“We certainly don’t want to prevent our student-athletes from any opportunities that might be out there for them,” Whalen said. “We just want to make sure that they’re doing it intelligently and that they’re not putting their eligibility at risk.”

While the new NIL policy may have opened up a new paradigm for college sports, Mullen downplayed the significance of what the rule change may mean for the NCAA’s cornerstone principle of amateurism, a value that some pundits declared to be on the chopping block following the Supreme Court ruling this summer.

“When they, for example, let the Dream Team compete in the Olympics, that changed what was considered an amateur,” Mullen said. “I believe the basic tenets that you can’t pay for play and you can’t get impermissible inducement to either attend a college or to stay at a college remain core principles of amateurism. It’s a wider range of what’s considered now an amateur, but again, there are some basic principles that remain.”