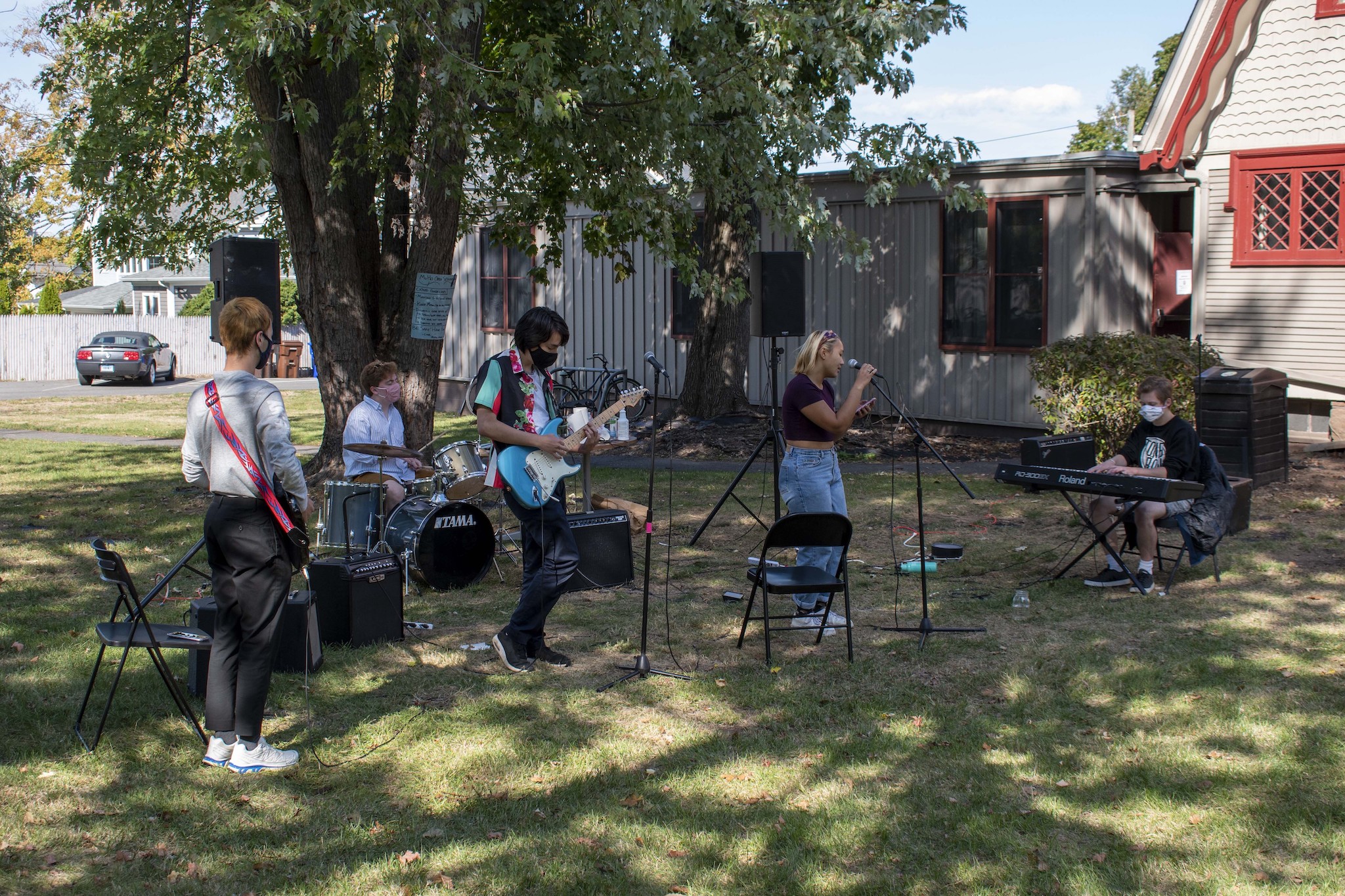 With spring right around the corner and vaccinations at our fingertips, artists can’t help but envision jamming to a crowd of people singing their hearts out and dancing passionately. Musically-inclined students continue to foster their talents with old and new friends, hoping to partake in outdoor shows and events in the upcoming months. Here’s a preview of some Wesleyan bands to look out for and listen to.

If you find yourself strolling past Music House, you will likely hear people grooving to Grateful Dead’s “Friend of the Devil” or “Eyes of the World.” Wesleyan’s Grateful Dead Cover Band “Jerry’s Kids” established its roots in the Fall of 2019 in preparation for the Battle of the Cover Bands, an event hosted by Music House, that encourages artists to come together, share their talents, and bust out their favorite dance moves.

“So, I just had the idea, a far-fetched dream of playing songs written and performed by the Dead and my good friend, Nic Catalan ’22, who is a fantastic guitarist, was also very into the band,” explained lead singer Jacob Zilversmit ’22. “He and I started jamming at the end of that semester, and then we put together a crew in the spring.”

The band name “Jerry’s Kids” was inspired by the Dead’s lead singer and guitarist, Jerry Garcia, who was notorious for his ability to let loose and improvise on stage, something that the group aims to emulate. While each member of Jerry’s Kids has previous experience recording and producing, they are most interested in live performance. Zilversmit describes how in-person shows are indicative of what the Dead is all about: ambling through tunes in real-time and encouraging group members to build dynamics that will last a lifetime.

Springtime at the University is famous for its various music events, and Zilversmit is passionate about making sure these opportunities don’t fall off once COVID-19 restrictions are lifted.

“I am going to try my damndest to put Battle of the Cover Bands together again,” Zilversmit said. “And, if Zonker Harris Day rolls around again, which is a hopeful dream, we’ll definitely be interested in playing that. We’ve talked about doing Tiny Shed Shows as well, but it mostly just is seeing how this semester progresses and what we can do.”

It can feel daunting to start up a new band, especially when socializing has become so out of reach, but Zilversmit shared his unique outlook on the current circumstances. Rather than rationalizing the pandemic as an excuse to take a pause from normal activity, Zilversmit sees this time as an opportunity to embrace creativity in a way we might have never otherwise.

“This band especially was completely formed on Nic and I and the rest of the guys taking a really random idea and running with it,” Zilversmit said. “I think the best advice I can give is just fucking do it… excuse my French.”

Band members coined the name “Pink Sink” after an episode of texting banter. Legend has it that they began by sharing funny little rhymes, typing out anything that came to mind.

“My roommate said things like ‘blue shoe, pink sink’ and then we kind of all stopped,” said Mallory Elliot ’23, the band’s lead singer. “‘Pink Sink’ had a certain ring to it. It’s silly because there’s no significance behind it at all.”

Pink Sink is another band born out of the COVID-19 era. The spontaneous creation of the name is very telling of the band’s spur-of-the-moment group dynamic. Since all the artists live in Music House, the making of the band was impromptu. One day, while jamming out in the house’s practice room, they realized there were enough of them to start a band. Soon after, they performed at an open mic, and have been collaborating ever since.

“We have a practice room in Music House, which is probably the main reason we can exist as a band,” Elliott said. “It definitely won’t be as convenient to practice next year. We’ll just knock on each other’s doors and be like, ‘are you ready to go?’ and then we just walk over to the music room.”

While the band feels grateful to have had time to grow closer and experiment with tunes on their own, they look forward to the day when they can perform live. The rush of grooving out in front of a real audience is something that cannot be replicated virtually. While they are in the process of writing their first original, they can’t wait until they can rock out to a crowd-pleaser and get everyone dancing.

The band is passionate about introducing outdoor concerts on the Music House lawn this spring. They encourage all bands on campus to get involved—not just those based in Music House—and hope that students will stay tuned if they are interested.

The first Foss Hill Open Mic Night after of fall semester’s quarantine jump-started the growth of a newly developed band, Bloody Undies. During the summer prior to their first semesters at Wes, bassist Bella Amenta ’24 and singer and guitarist Alisha Simmons ’24 became friends through Instagram and realized they shared the same gut feeling that they were going to play music at the University.

“Bella found Nicki Klar ’24, our main singer, and when we decided to perform, we were like, ‘oh my god, we need a name to introduce ourselves,’” Simmons said. “When Nicki suggested ‘Bloody Undies,’ we didn’t know we were going to be a band, but we performed and it worked.”

Thanks to the drum set in the WestCo Cafe, Bloody Undies has a place to practice and let their creative juices flow.

“We feel grateful to be at Wes where COVID-19 is under control, because last semester we were able to perform outdoors at Tiny Shed, Music House, and Foss,” Simmons explained.

While the group is lucky to have places to practice and perform, COVID-19 has presented other unexpected struggles, like having to find other members, drummer Caroline Lamoureux ’24 and guitarist Clara Martin ’24, online.

Simmons describes Bloody Undies as an indie rock band, but with more emphasis on the rock. The group has a handful of covers under their belt, such as “I Don’t Know You” by The Marias and “She Plays Bass” by Beabadoobee. In terms of songwriting, Bloody Undies recently finished recording their first original song, which should be out in a few weeks. Though planning is difficult these days, their goal is to come out with a photoshoot and music video alongside the new single.

“It seems scary and daunting, but entering the music scene here has been so nice,” Simmons said. “All the other bands have been so kind and offered us so much help. There truly is no competition, everyone is just trying to have fun and make music. Follow our Instagram, @bloodyundiesband!”

Hotmail, like Pink Sink, consists solely of students living in Music House. Elliott, who sings for both groups, explained how the overlap of band members is an exciting aspect of her living environment. Since a passion for performing and creating music is so ingrained in the house’s culture, tunes are constantly flowing from floor to floor.

“There is always music playing,” Elliott said. “It’s actually kinda funny—we have a Google Calendar for scheduling time in there, a shared one throughout the house. It is kind of ridiculous. But, yeah, people sort of just jam on their own all the time.”

The members of Hotmail came together through their shared love of Snail Mail, an indie rock music project of musician Lindsey Jordan. The band sticks strictly to Snail Mail covers and is eager to run through her whole album “Lush” for a future show.

One of the older bands on campus, Mother’s Friends consists of three close friends: Nic Catalan, Emma Valentine ’22, and Sammy Osmond ’22. Catalan said he started making music with his freshman year roommate, Osmond, as soon as they met. When the two joined with Nic’s high school best friend, Valentine, who also attended Wes, he decided they should all make music together.

By the end of their freshman year, Mother’s Friends had released their first single, “It Happens Every Day.”

The name “Mother’s Friends” didn’t come with much ease.

“We spent so long cycling through many terrible names, and I still make fun of Sammy, my roommate, for all the bad ideas,” Catalan said. “One day during freshman year, our friend was over and looked at Sammy’s record. She put two names together that she saw, Mothers and Friends. We sat on it for about two months and then decided it was the one.”

Mother’s Friends hasn’t let COVID-19 stop their artistry. They managed to release an EP at the very start of the pandemic, when students got sent home, and another single last semester.

While they are working hard to push through setbacks, Nic admits that this time has been difficult for the band.

“A couple days ago was our first time hanging out and making music together in a year,” Catalan explained. “I make the instrumentals and produce the songs, so I’ve been sending things in our little chat, but COVID-19 has kind of sapped our creative forces.”

The group self-branded their genre as “cute pop,” and they write all of their own music. Catalan said his favorite song of theirs is an oldie (released in 2020), “Hope I Don’t.”

“We want to play at least one show this semester, probably a Tiny Shed,” said Catalan. “We also want to come out with an album next year with our friends. That’s our favorite way to make music, with our friends.”

After lead drummer Rory Dolan ’23 picked up a letter from his grandmother in his WesBox, the band knew they’d found their name: “Love, Grandma.”

“As soon as it happened we were like, ‘we are going to tell someone about this one day,’” Dolan said.

The band describes their coming together as a gradual process. They first established their roots last school year when Dolan and Gib Bernath ’23 discovered their shared desire to start a band. Soon after their initial jam sessions, they met Liam Murray ’23, who wanted in. While they were able to play some shows before COVID-19, their performance time was cut short when March rolled around and students were sent home. Still, they are hopeful for events this spring.

“We are hoping, theoretically, to do a concert this year in place of Zonker Harris Day, which is normally Westco’s big concert festival event,” Dolan said. “It would be really cool if that could happen.”

The band continued to grow this past fall, when Dolan met Ben Gertner ’24 in the Classics line at Usdan—a true love story. Gertner complimented Dolan’s shoes, they talked music for a bit, and they have been playing together ever since.

While Dolan sticks to drumming, Murray, Bernath, and Gertner alternate between bass, guitar, and singing. Bernath also does art and production.

One might describe Love, Grandma as an indie rock band, though the members agree that the genre is up for debate. Gertner explained they’re still trying things, sprinkling in some shoegaze and post-punk along the way.

“We covered the Drake and Josh Theme Song for our first show, but we do 99% originals,” Dolan added.

Band members added that they look forward to the day where they can perform in a packed space, hopefully creating an oh-so-missed mosh pit.

“I miss mosh pits so much,” Gertner said. “The ultimate goal is starting a mosh pit.”

The band currently has one song on Spotify and Apple Music, “Grace,” which came out in February. The song can also be found on BandCamp, where all proceeds go to the Middletown Mutual Aid. They also plan on releasing two more singles before the end of the semester.

Abby Glassman can be reached at aglassman@wesleyan.edu.

Sonia Menken can be reached at smenken@wesleyan.edu.