Sweat, Light and Music: ‘BandsBandsBands’ in the WestCo Cafe 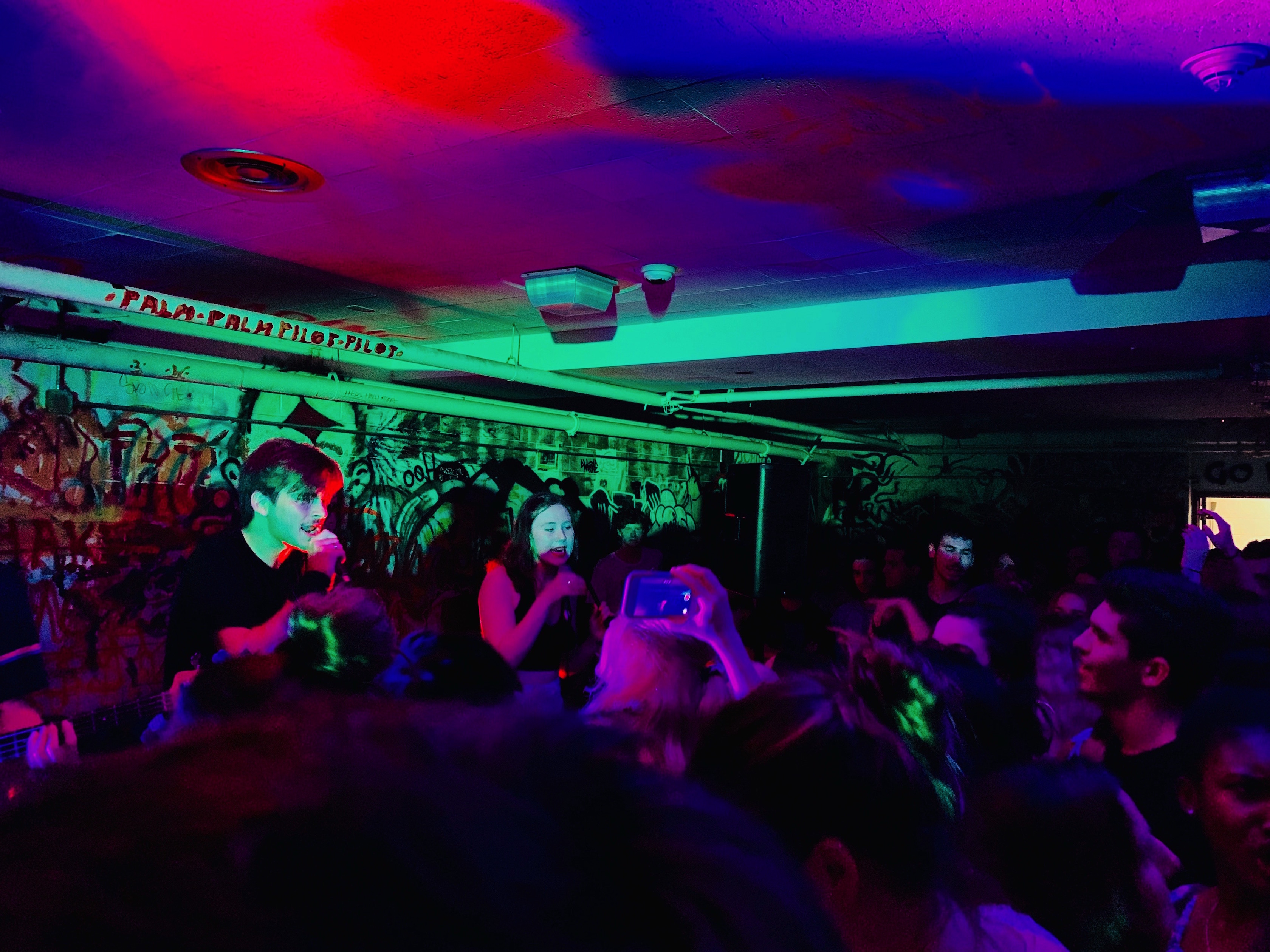 When the WestCo Cafe is packed anywhere even remotely near capacity, it gets hot—and the inevitable sweat beads that drip down the dozens of bodies occupying the space begin to reflect the reds and greens of the lights scattered around the room. If you’re in the right state of mind to be making strange observations, which many WestCo Cafe-goers often are, it almost looks like the crowd is glowing—each person a weird but awesome combination of sweat, light and color. But while the WestCo Cafe’s energy seems to be consistent with every event it holds, is still relies on the event itself to produce that amazing creative electricity. This past Saturday, the “BandsBandsBands” show produced no shortage of sweat and energy in the large yet intimate, graffitied yet clean, basement performance space that is the WestCo Cafe.

BandsBandsBands—which succeeded Friday night’s enjoyably hectic ABC (Anything But Clothes)—themed disco—was, as the name suggests, a live-music oriented event with three Wesleyan student bands in the lineup for the night. In order of performance, these were: Mother’s Friends, Toxic Holiday, and Loveburger. To spread the word about the event, a series of effectively designed posters, featuring a persuasive and compelling Pokémon, were stuck up around campus and posted (buried, more like) on the class Facebook groups. More importantly though, a general buzz surrounding the show contributed to the Cafe filling up when the doors opened at around 11 p.m.

The masses were finding their way down into the depths of WestCo 3, and stepping through the threshold into a place where long Usdan lines were of no worry, where an 8:50 was Monday’s problem, where Moodle may as well not even exist and where all the trivial issues us Wes students complain about melt right away—they crossed the threshold into the WestCo Café. Alas, the heat began to rise, but the audience’s discomfort was replaced with excitement as Mother’s Friends, the first band in the lineup, took the stage and posed the classically exciting live music rhetorical question: “How’s everybody doin’ tonight!?!”. And to this, the crowd replied with a much expected eruption of “ahhhhraaawooopYEAHHHoooclapclpahhWOOOOHoo.” The ribbon was sonically cut—BandsBandsBands had begun.

Mother’s Friends, like many bands, have a hard time describing what genre they fall into, so instead, they tell me they think of themselves as mix between Flying Lotus and John Mayer. This makes sense. The recording band is made up of Emma Valentine’s beautiful voice, Sammy Osmond ’22’s confident and engaging lyrical ability, and Nic Catalan ’22’s talented songwriting and musical performance abilities. During live shows, the band is joined by multi-instrumentalist, Tyler Jenkins ’22 (of Toxic Holiday) on drums. It is safe to say that Mother’s Friends pus on an energetic show more than worthy of the WestCo Cafe, as did the acts that followed them. One of the highlights of their 45-minute set was the final song they played, the only song that they have officially released, and the one that the most amount of people knew the lyrics to—“It Happens Every Day.” It was a stimulating and energetic three and a half minutes for the crowd, and equally if not more so for those up on stage.

Toxic Holiday, the second band in the lineup, had a similarly memorable stage presence. The band, which took the stage at around 11:50, featured the talented four piece of Jackson Roman on drums, Daniel Ramirez on bass, Franco Acuna on guitar and Tyler Jenkins ’22 on guitar and vocals. As they launched into their first song, it was clear that they were a well-practiced band. They were tight and confident, with each instrument complementing the next, and Tyler’s vocals distinguishing themselves amidst the instruments. Though the set was lively, with the energy of rock, it was easy to listen to and played more than well into the indie-soul sub genre. Toxic Holiday were fitting successors of Mother’s Friends and maintained the high standard of musical performance established at the outset of the night.

Finally, Sweetburger took the stage, introducing a new instrument to the repertoire of the night—tenor sax—and as such, a new genre of music; one that seemed to blend together the two bands that preceded it. Sweetburger calls its music “neo-soul with funk and pop influences,” and I couldn’t think of a more apt way to put it. With Jack Warnock ’22 on drums, Josh Markowitz ’22 on bass, Jack Canavan-Gosselin ’22 on keys, Noah Lilienthal ’22 on tenor sax, and Emily Bloomfield ’22 on vocals, Sweetburger put on a mesmerizing show. Launching into interesting songs and even more interesting jams, the band provided a new palette that beyond succeeded in keeping the crowd’s attention—it was making people dance. Sweetburger were a final wow-factor to conclude an already wow-inducing night of music.

What was especially great about BandsBandsBands was that each band was not only talented as performers, but also as enthusiastic entertainers. No matter what a band is playing or how they’re playing it, if they’re really into it, at least some of the crowd will be too, and rest assured, that night everyone was into it—enthusiasm is contagious. The WestCo Cafe was happening, and will continue to be.

Gib Bernath can be reached at gbernath@wesleyan.edu.