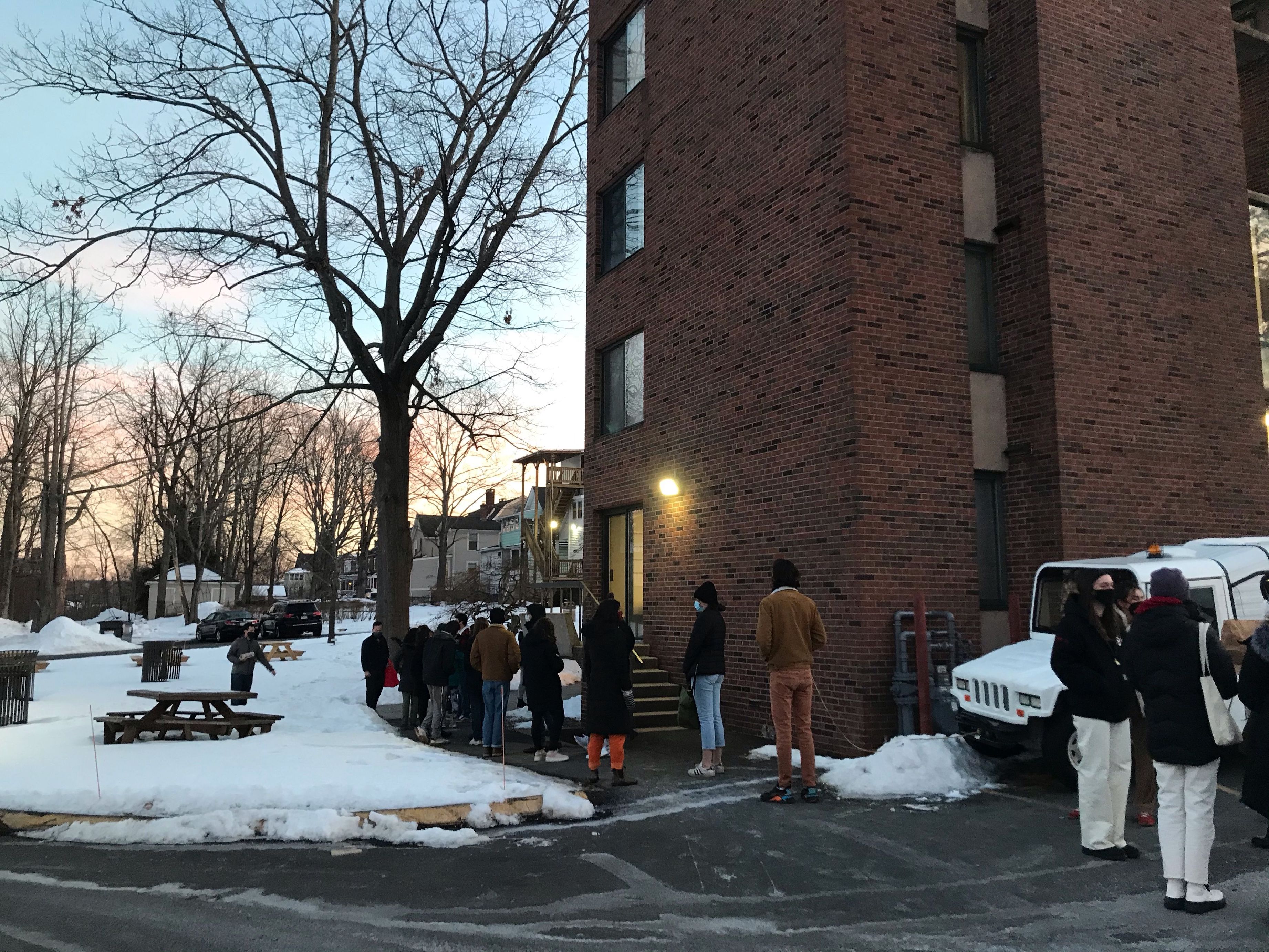 Before students arrived on campus last fall, many were unsure of what to expect from dining services. Would students encounter a NYU quarantine dining situation, with lunches consisting of firm lemons and moldy cheese sandwiches? Would they be forced to rely solely on their stores of Cliff Bars and Yerba Mate? But upon arrival, many were pleasantly surprised with what the University had in store.

“I thought it was great,” Fana Schoen ’24 said. “It was kind of scary sometimes to be in such long lines outside for an extended period of time, but I felt very comfortable and safe for the most part, since most people were social distancing and it was outside and everyone was in masks and stuff. I also thought the food was too good. I thought it was so delicious. ”

While some students appreciated the quality of the food last fall, the high level of COVID-19 safety around dining proved to be even more important to them.

“One of the very big perks of it was that it really set the tone for the fact that that semester wasn’t going to be normal,” Sammy Osmond ’22 remarked. “The students had no justification to really leave the buildings they lived in, it really kept the campus broken up and kept quarantine really effectively done.”

When students returned for the spring semester, some were surprised by the updated dining arrangements, which differed drastically from the fall plans. Specifically, students expressed confusion as to why Usdan University Center was the only dining location open from Feb. 5 to Feb. 8, the first three days students were on campus.

“I was shocked,” Natasha Marder ’22 recounted. “It was super crowded, and actually walking into Usdan was kind of a nightmare. People bumped into me. There was not even space to really walk around. It kind of reminded me of when you would go for dinner on a really crowded night, just before COVID. It felt unsafe for both students and for the workers.”

Other students echoed Marder’s concerns about how the changes in dining impacted pandemic safety.

“I definitely have not been super happy with how it’s been, just because there seems to be no commitment to limiting the number of people or to spacing things out,” Talia Rodriguez ’24 said. “And definitely that’s not the fault of the dining staff, but definitely an institutional issue. I also don’t think it’s a student issue, because students are just trying to get their dinner as fast as they can and there’s no guidance.”

Many even took to Twitter to vent their frustrations.

“so fun that I can get dinner on campus & attend a super spreader event all in one,” read one post.

“okay but why do i feel like quarantine is not being taken as seriously this time? is it just me? it’s not even just students but like the usdan situation is so strange to me. why would you have a singular food pickup point” another said.

According to an email cowritten by Dean of Students Dean Rick Culliton, Director of Usdan University Center Michelle Myers Brown, and Associate Vice President for Finance Chris Olt, the dining set-up was decided by a team with representatives from Student Affairs, Bon Appétit, Finance and Administration, Health Services, and the broader Pandemic Planning Committee.

“The winter weather provided a challenge by making outdoor dining not an option. Based on positive student cooperation from the Fall regarding social distancing and the wearing of face covers, we felt we could facilitate to-go dining while using our primary dining facilities,” they wrote. “To complicate matters, the flood at Usdan over the winter break caused us to delay the return of the dining program from Summerfields to Marketplace. This resulted in Summerfields to be offline for a few days to transition to quarantine dining.”

The administration planned to remedy this by opening other dining facilities such as WesWings, Weshop, and Red and Black Café the Monday before classes started.

“We know that opening weekend was a bit more congested than we would have liked, but having all of the dining locations open now seems to be running smoothly,” they wrote.

However, students have mixed reactions about the efficacy of opening other locations. Rodriguez mentioned that she didn’t notice a difference in the amount of students at Usdan, even after other dining locations opened.

“Freshmen go to Usdan ’cause ’Swings and Red and Black use points,” Rodriguez said. “I went to ’Swings on Saturday, it’s not like I can go everyday for lunch or whatever.”

Adina Chasan-Taber ’23 also said that regardless of how many dining options have been available during quarantine, it is still hard for people with dietary restrictions to get food. As someone who follows a gluten-free diet, she relies heavily on Weshop, which has also recently been overwhelmed with student orders.

“Weshop is impossible to order from cause they’re so booked up with the orders, and we can’t go off-campus,” Chasan-Taber said. “So it’s been more challenging, I think this semester to just find something to eat.”

Other students, however, said that the altered dining plan made sense due to the challenges winter weather would pose to outdoor dining tents.

“My initial response was surprise, and then a second later was ‘oh that makes sense,’ because the more I thought about it, you can’t do tents because there’s snow,” Luka Netzel ’24 said. “The weekend we came back it was just snowing and was cold and miserable outside. No one wants that for kitchen staff.”

That being said, some students came up with suggestions for how the University could have improved the quarantine dining plan.

“They could have done a signup or like, ‘Oh, come at this time’ like the way that they do COVID testing,” Schoen said. “If they’d done meals the same way or a similar way, like you sign up to come at 12:15, and you can get your food between 12:15 and 12:45, maybe that would have helped minimize how many people were there at a given time.”

Marder, who eventually emailed the University with her concerns about the riskiness of indoor dining during quarantine, also had suggestions for how to improve the situation.

“When I think about all of the spaces on campus that aren’t being used during quarantine, those feel like they could have been used,” Marder said. “Especially knowing that in the fall, we were able to have tents all around campus, which meant that people were working at all of those tents. [This] made me feel like we could have done a similar system, just indoors in different spaces where a few people from the dining hall were working there and giving food.”

Many students emphasized that while more places have opened and quarantine will be lifting on Feb. 21, many of these issues do not go away. For one, Chasan-Taber felt like more could be done to help limit the capacity.

“I think they could be a lot more accommodating to the size and the population density of our student body and making sure everyone feels safe,” Chasan-Taber said.

“It just kind of felt like it was a huge oversight by the university in the fact that we did so well in the fall that we would automatically succeed in the spring,” Marder said. “And just because we aren’t seeing so many cases, I don’t think that that means that it’s right to give people the anxiety of having to go to the dining hall and walk around feeling, like, I don’t know if they’re going to get COVID.”

And above all, students noted the need to stay wary when it comes to dining indoors.

“I think it’s just important that people keep checking themselves and remembering the position we’re in and how lucky we are to be back here and how little effort it takes to make sure you’re distancing and make sure you’re following all these rules because there’s fewer physical reminders,” Osmond stated.

Grace Kuth can be reached at gkuth@wesleyan.edu