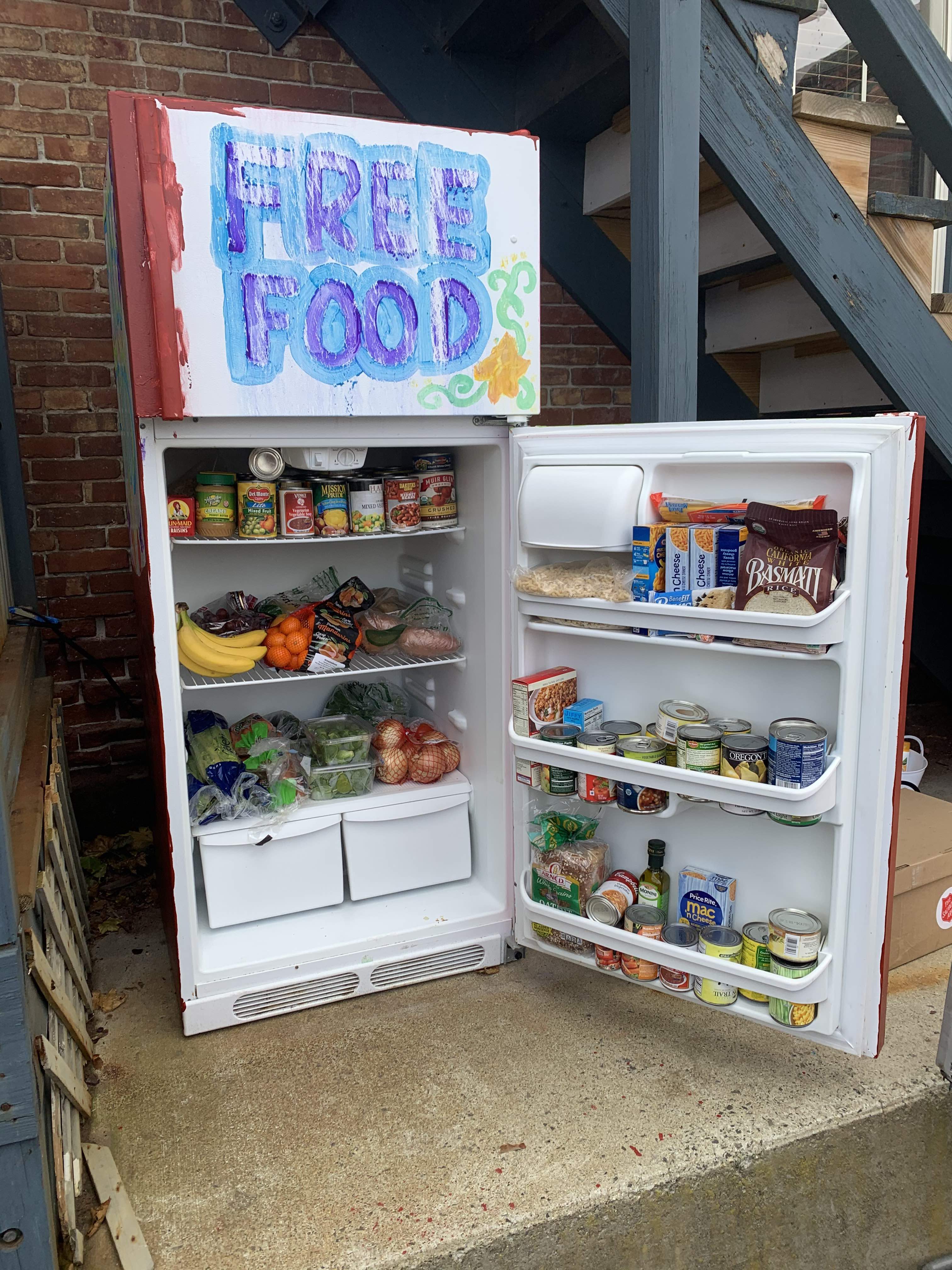 The Middletown Community Fridge opened to the public on Monday, Nov. 16. Located at 33 Ferry St. under the stairs of the Community Health Center (CHC), the fridge sits next to the Ferry Street Community Garden. The fridge is a collaborative project between Middletown Mutual Aid, the North End Action Team (NEAT), a collective of University students, and several Middletown community members.

First imagined by Ruth Samuels ’23 and Lola Makombo ’21, the Community Fridge was instituted to increase food accessibility among Middletown residents and develop a more communal aspect of Middletown Mutual Aid. The fridge is accessible at all hours of the day, with no limitations on what can be taken. It contains items such as sanitary products and food, with the hope that residents will take or leave what they can.

University students are encouraged to contribute to the Community Fridge by participating in the #nopointsleftbehind campaign, in which students purchase goods to donate to the fridge using their extra meal points at the end of the semester. Organizers and volunteers, both University students and Middletown residents, then transport donations to the fridge and ensure that products are clean and safe to consume. Organizer Maya Gomberg ’22 explained that the concept for the fridge was made into a reality through the efforts of the Middletown community.

“I, as a very privileged Wesleyan student, have a lot of points to actually bring a lot of food down, but the guy who’s helping us out in the garden day-to-day has the time and the energy and the relationship to the women who work [at the Community Health Center] to make it possible,” Gomberg said. “So everyone’s giving different things.”

This emphasis on synergetic organization and donation is at the heart of the Community Fridge, which serves as a collaborative effort to foster community.

“So, it’s really about these community connections and building trust and building together,” Gomberg said. “And that’s what mutual aid is, right? It’s not that we’re just redistributing. It’s not just wealthy giving to the less wealthy, it’s that everyone has something different to give.”

Inspired by similar efforts in larger cities such as Boston and New York, Middletown residents and University students alike recognized the need in the community to collaborate on the Community Fridge project. The organizers were able to find a fridge relatively easily, but faced challenges scheduling the delivery and maintenance of the food.

“The other really important part is making sure that we were going to get sustainable food and that there were people to check on the food to make sure that nothing went bad, that it was sanitary and that it was always stocked,” Gomberg said. “So, we did a lot of work, lots of spreadsheeting, reaching out to different grocery stores, to different farms, to some restaurants, to see if they would be interested in donating.”

Many residents were inspired to get involved by their own observations of the community. Participants contributed what they could, like Kevin Hart, a resident who worked on the fridge and painted the exterior. Others like Lisa Girard researched community fridges nationwide and did community outreach to figure out how to best apply this model in Middletown.

“One of the things that always bothered me about Middletown was we have this amazing ecosystem of almost a hundred restaurants,” Middletown resident and NEAT member Dmitiri D’Alessandro said. “Or maybe there’s more than that. And yet there’s people here, pretty much everyday who don’t have enough to eat. It’s kind of distressing to be a waiter or waitress in a restaurant and you’re sitting there serving hundreds of dollars worth of food. And yet you look out the window to the sidewalk and you can see people walking by that are obviously hungry.”

Middletown residents have been instrumental in organizing the fridge, especially because they are also its primary constituents.

“I’m gonna have to say my biggest role is I need the resource myself,” Middletown resident Jimmy Draughn said. “As someone who isn’t originally from Middletown, yet being born and raised in Connecticut, hunger is and will be an ongoing issue…. I see the Community Fridge as a seedling for more socially balanced ideas and relationships to grow and connect on a more compassionate level.”

WesNEAT Co-Coordinator and Middletown resident Emily McEvoy ’22 believes sustainability is an especially important issue when it comes to University students’ involvement in community organizing, largely because students often leave Middletown for several months at a time during school breaks.

“If you’re going to be the one going and doing the thing, and then you leave, you kind of lose that part of yourself,” McEvoy said. “It’s not the greatest when you’re deferring that responsibility to people. And obviously I’ve been making sure to make that perspective heard, as someone who lives here, in every conversation. So a lot of consciousness of this is how we’re going to continue.”

While the future of this project remains uncertain, continuing and expanding food sustainability and security in Middletown will remain a top priority.

“So we’ll give it a little bit just to make sure it’s running smooth and then work on another one,” D’Alessandro said. “And then I think the next steps are starting to really address food insecurity at a more fundamental level.”