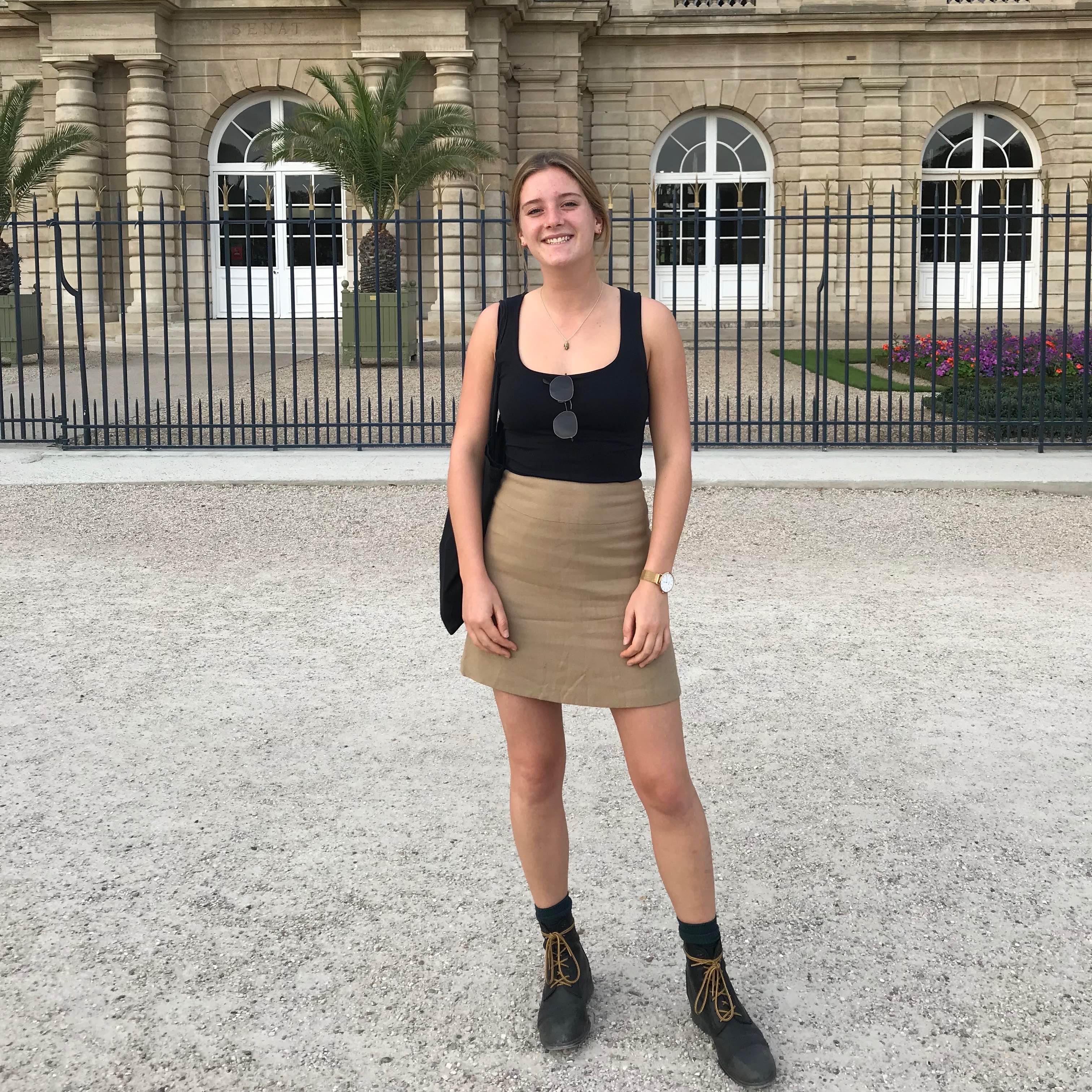 If you’ve gone to a comedy show on campus, you’ve probably seen Cameron Burger ’20 on stage. Or, to be more accurate, you’ve probably guffawed at one of her bits. She’s been doing comedy since her first year on campus (and been performative forever) and she’s very good at it. To catch a glimpse of the woman behind the jokes, The Argus sat down with Burger to talk comedy, the future, the past, and more.

Cameron Burger: Probably because I do a lot of comedy stuff, so I’m just like yelling on stage all the time. And I’m visible.

A: What do you do with comedy on campus?

CB: I do a lot of stuff. Hysterics, which I’ve been doing since freshman year, and they started the year before I got here. That has been really cool and I feel like—last year, a bunch of the people who helped start it graduated, and so now we’re in this really exciting new, like, stage of its life, ’cause the group is still so new, but that’s been fun. I feel like I’m just in charge of that in a de-facto way because everyone left. And then New Teen Force is the improv group I’m in, which is free-form improv, and there’s eight of us, and two people aren’t on campus right now. But I’ve been doing that since freshman year, too, and we have three new people who are dope. And then…oh, my friends and I just started a sketch group called Quack Pack and we’re doing—I did not make the name, they made the name—but we’ve been making video sketches, so that’s been fun, and we’re trying to keep up with that. And then me and Alvaro [Chavez ’21] just wrote a show over the summer and now we’re in the process of putting that together.

A: How do you feel about the different kinds of comedy that you do?

CB: They’re super different. I think improv is fun because it’s literally just fucking around with my best friends. Like, when we have a good practice, I literally am giddy like a child. And then stand-up is fun because you’re in complete control and you just get to do whatever you want and get a bunch of attention. Sketch I’m really new to, but that is like…I don’t know. Making videos is something that I always did when I was a child. Whenever my friends and I would have playdates, we’d make movies or whatever, and I feel like it’s fun to do that now that I’m actually pursuing comedy more seriously.

CB: Yeah. Wait, definitely. We love a performative moment. I did, like, theater. Never that seriously, but I always did theater when I was a kid. And then I didn’t act in high school, really, and I haven’t really done theater at Wesleyan. But in high school I did speech and debate, which is extremely chill [laughs] and that was sort of when I got used to performing on my own and—I knew that I wanted to do comedy but I was like, okay, I can take the heat. And then I was excited to try it when I got to Wes. Stand-up, I mean.

A: How does it feel to be a senior?

CB: So weird. Like, really strange. And I think by May I’ll feel good about graduating and feel ready to leave. But it feels incorrect that I’m part of the oldest group on campus. Living in a house is amazing, and I love my housemates, and it’s fun to just feel like—I don’t know—I can just really do whatever I want. I’m not like “Ooh I have to go to this like Second Stage show because my hall-mate is in it.” There were so many pressures and expectations that you put on yourself as an underclassman and now I’m just like “Oh my god, I don’t have to do any of that.” I feel liberated.

A: Do you know what you will do—not to ask the question no senior wants to talk about—after graduation, in the future?

CB: I don’t know. I think I’ll probably move back to the city [New York] and live at home with my dad for free for a little bit. Next semester, I’m interning at Last Week Tonight with John Oliver. So that’s crazy and exciting. I keep getting paranoid that the woman who was like “yeah, you have a spot” is gonna like, forget. I dunno, knock on wood [knocks on table]. Am I jinxing this? Whatever. But I’m really looking forward to that and that’s gonna be my first real grown-up job-job that’s not like, summer job silly stuff. That’s gonna be a really exciting place to be, I think. So, I don’t know. I’ll be in the city, trying to do comedy stuff. 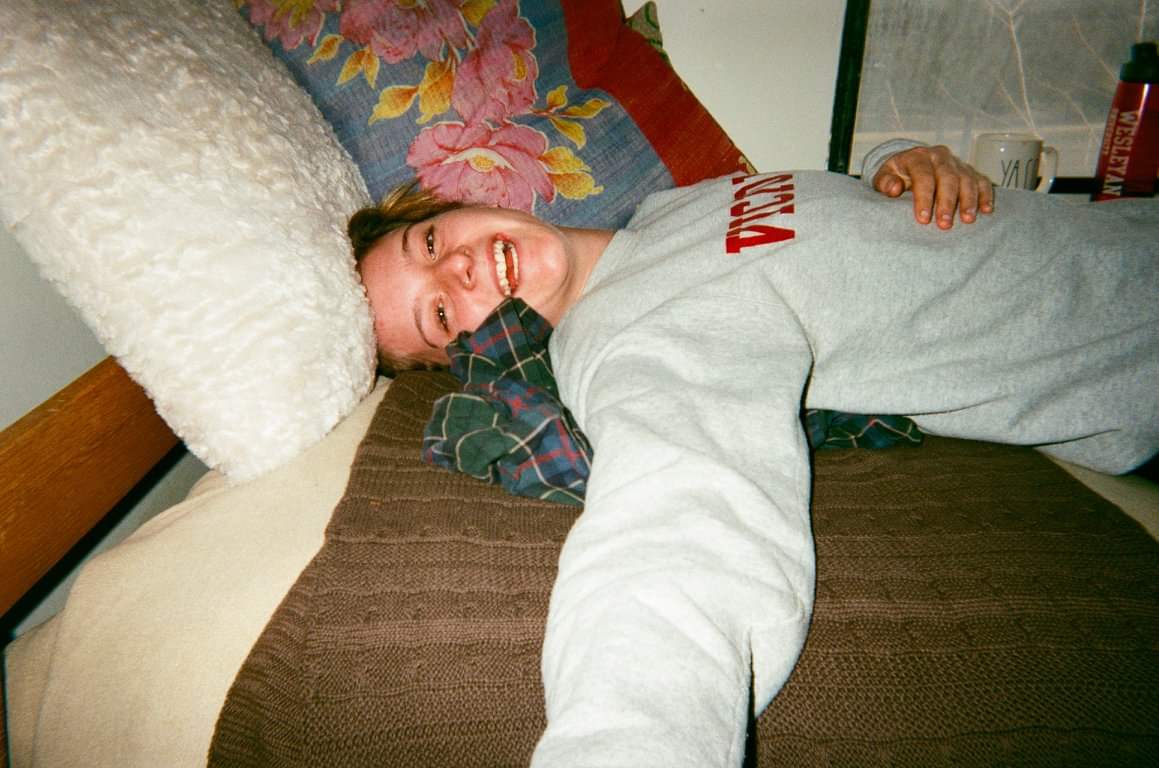 CB: I just think—what I like about doing it is that it’s fun to feel like a kid and laughing is just such pure childlike joy. I feel similar about watching it, to be honest. I want to do it as my job partially because I don’t know what else I would do. It’s just something I’ve always wanted for a really long time, I think. The world is so depressing. Like, things are so bad, and they’re gonna stay bad, and they’ve been bad forever, and I think if you can still laugh and have fun then that’s kind of the best you can do for yourself.

A: Do you think, when comedy is more complex or more personal, it’s just better in general?

CB: I think so. I do think so. If you have something to say or something personal to share, you’re probably doing something more substantial with your work, but also I do love just like stupid humor, it simply doesn’t get old. Hopefully what I do now is a step above stupid humor, but most of it is not. So, I don’t know. Whatever’s fun.

A: You don’t have to have a “take” on this, but what do you think about the recent controversy in comedy, the whole Louis C.K./Aziz Ansari thing? Like the intersection of comedy and social responsibility or comedy and people being bad people…

CB: I think there’s a lot of overlap, and it’s also…I feel like there’s this conceit that has existed for a long time, that comedy and important comedy pushes boundaries. I think maybe that’s true, but it’s also—if you have a platform to reach people through stand-up or through anything and your first thought is “Oh, I want to push some boundaries,” I feel like you have to seriously question which boundaries you’re pushing and why you think it’s your responsibility to push those boundaries. In a case like Louis C.K. where all of his content so clearly reflected his terrible behavior and abuses of power…I don’t know, that’s just a really unique case, where he was so blatant in his use of that platform not even to push boundaries but just to I don’t know, alleviate himself of guilt? Am I gonna get—wait no I’m not saying anything bad. I dunno, but I’m not saying any hot takes.

A: So you think “you can’t make fun of anything anymore” is kind of stupid?

CB: Yeah, I think it’s stupid. I just think it’s “what do you want to make fun of?” And there’s that golden rule of don’t punch down, and it’s like, well yeah. Don’t.

A: What do you want to make fun of?

CB: Me? I don’t know! Like, myself, that’s always fun, but also—I was just talking to my housemates about “Nanette” the other day, like self-deprecation is also so prevalent in stand-up and I would not want that to be a crutch, but it is fun. In terms of what we were just saying—about if you have a platform to speak through with comedy—you can be self-deprecating but it’s also important to challenge why you’re doing that. What else do I want to make fun of…. Frankly, I make fun of other people in my comedy, like, strangers. Which is not like a politically important or brave move, but I feel like that’s sort of where storytelling goes with stand-up sometimes. I don’t really feel like it’s necessarily my job to be like tackling the biggest political issues of the day. Because no one cares: I’m performing for like, 30 people at Wesleyan. Like no one gives a shit. But also, I don’t know, I don’t have anything special to say. So I’d rather just—not that I stay away from political stuff altogether. I think everyone’s experience speaks to something political or societal or social or whatever. I never have like, searing political hot takes, just ’cause I’m like “this isn’t going to be anything new.” And when I do have something that’s like a searing hot take then I’ll totally try to use it in my comedy or say it through my comedy. I dunno—I have a lot of other people to learn from.

A: You’re an English major? Why?

CB: Mm hmm. Good question. [laughs] I don’t know, I came into college, I was like “I’ll probably be an English major” and then I fucked around, took a bunch of different classes freshman, sophomore year. Really liked a lot of them, English classes included, and then we had to declare our majors and I was like “okay, English it is, I guess.” I don’t have a good reason. I’m not a well-read English major. I’m like a very dumb English major. Unfortunately.

CB: Oh. Wait, that’s hard. Okay, this is a dumb answer, but Senior Week my sophomore year was so fun. We were just running rampant, like children at summer camp, but there were no grownups and no inhibitions, so that was good. And, with New Teen Force, we do this comedy festival at Harvard in the spring. We get to go there and perform, which is really fun and there’s a bunch of other cool college groups and a professional group performs every time, and a bunch of them are in the Harvard Lampoon so they take us to the Lampoon and tell us all their secrets. And that has been so fun. That was really fun last year. So maybe that. Those aren’t good answers, but…whatever.

A: When you graduate, how would you like to be remembered?

CB: Oh my god. Whew. Hopefully not based on my abrasive behavior. I don’t know. I hope people think that I’m nice—that’s such a bad answer. I don’t know. Wait. I can think of something good. Remembered as… I don’t know. Hopefully, a friendly and warm person with breathtaking good looks and charm.

A: Anything to plug?

CB: Oh, everyone should see “The Artists,” which is me and Alvaro’s [Alvaro Chavez ’21] show, directed by David Lepelstat [’22], and it’s going up December 5th and 6th in a venue TBD.

CB: “The Artists” is a play that Alvaro and I wrote over the summer. It’s a two-man show because we’re very vain. It’s a love story slash comedy slash like mixed media a little bit. It’s been really fun so far. I hope it turns out well.

A: I think that’s all the questions I have.

CB: Cool. Uh oh. I feel like I just blacked out for 30 minutes. I hope I didn’t say anything incriminating.