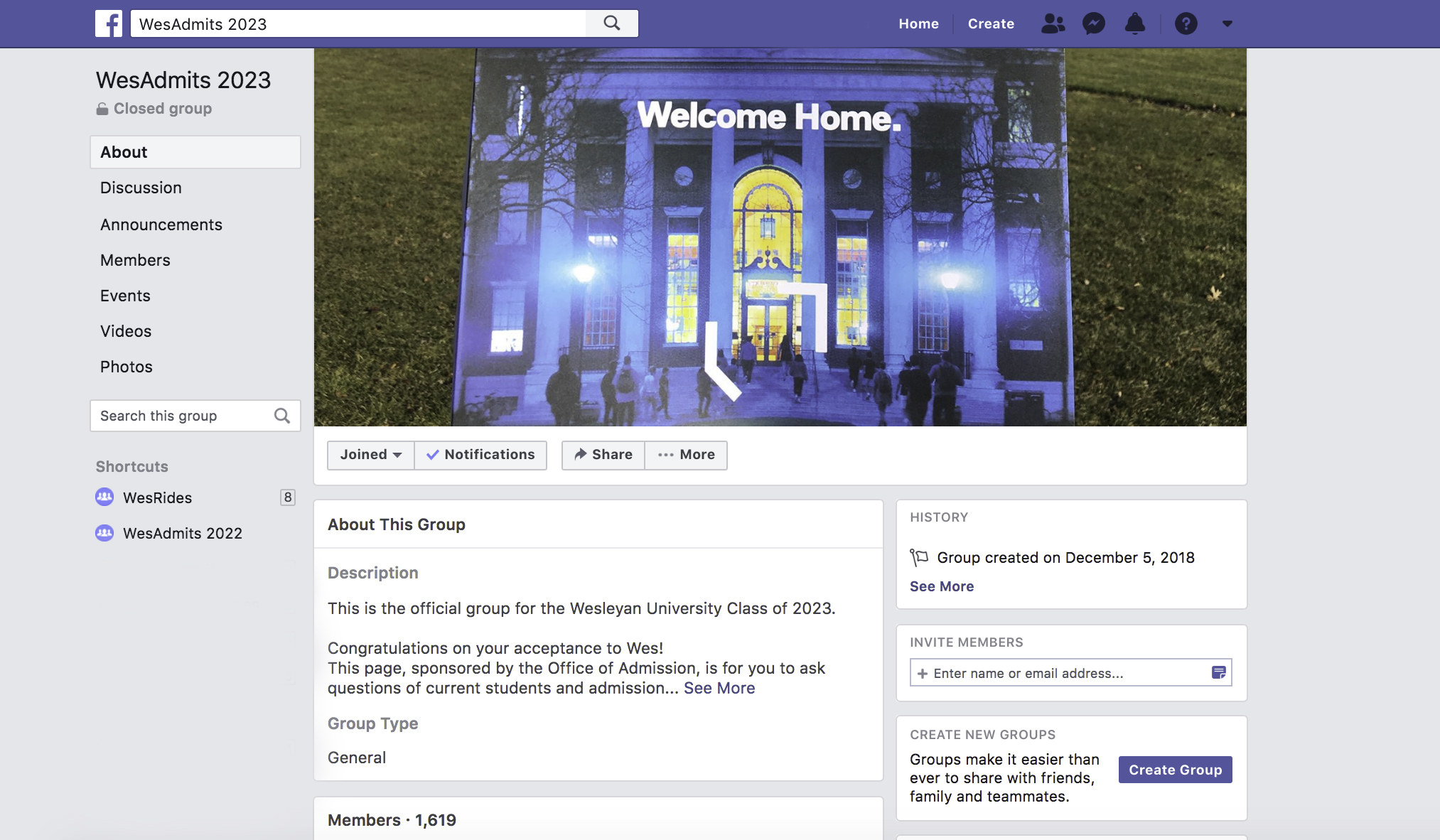 Last winter, when snowflakes made Foss Hill a blank canvas of undisturbed white, my friend made a post in the WesAdmits 2021 Facebook group: “does anyone have a sled?” she asked, punctuating her lowercased question with a winking emoji. There was an immediate flurry of comments, though most were coming from the people sitting to the left and right of the person who posted, as we all enjoyed our Thanksgiving meals from Usdan. Everyone knows that the more interaction a post gets on the WesAdmits Facebook group, the closer the post will be to the top, and the greater chance it has of being seen. Though no one in the comments had a sled, the post was noticed by a number of people who agreed it was a perfect sledding evening, and we were joined by many on Foss who were curious if we had found a solution. (The solution ended up being trash can tops, which shimmied across the snow with considerable effort.)

I remember scrolling through introduction posts on WesAdmits a year ago, as prefrosh posted their interests, dog pictures, and Instagram handles. I remember telling my mom that “everyone at Wesleyan seems to play guitar and watch a lot of arthouse films,” while students at another school I was considering all appeared to know each other from some New York private school Illuminati. A new writer for The Argus informed me that when she was making her college decision, she decided against Carlton College in Minnesota because there seemed to be an overabundance of “horse girls” populating the admitted student Facebook page. Wesleyan, she said, had people who were shiny but also interesting. “You can get a flavor of a school from those pages,” she said.

We hear time and time again about the dangers of social media: the years it sheds off our lives, the anxiety it prompts, the way it is uniquely affecting our attention spans. In an optimistic sense, these platforms are opportunities to learn about our friends and acquaintances, miniscule glimpses into the daily thoughts of others. From a darker—and more honest—perspective, these platforms give us curated content that deludes us into thinking everyone has the perfect life.

But what happens on WesAdmits seems to me distinct from the coercive and deluding qualities of social media—qualities which have been on my mind since reading Jia Tolentino’s “Trick Mirror”—for reasons I suspect are related to the general nature of social media on a small college campus. I was scrolling through WesAdmits a few days ago when it occurred to me that such a page is a rare moment of productive community in the treacherous digital world. When the audience of social media posts is limited from the entire world to just those who are part of a small community, the problems associated with anonymity vanish. The distance between the digital and the real dissolves, at least to some extent, and the meeting place online becomes more of a forum for opportunities in the non-digital world. This week saw a capella auditions, hiring notices, and club events, as well as posts crowdsourcing for lost keys, collaging material, and a tarot-card reader. A limitless bulletin board or activity fair seems to be the goal of the WesAdmits pages, a sharp contrast to the University president–bashing meme pages. The two are kept neatly separate, unspokenly so. Perhaps this is how social media is supposed to function, as a space where people who have never seen each other before can volunteer to bleach a stranger’s hair or can find out about new places to make friends. In this case, the media prompts the socialization, and this seems to be effective.

Yet I also wonder about instances in which these pages can foster divisions, either by simulating some false homogeneity of opinion or by enforcing divides between the different grades. I’m unsure why universities feel the need to make new pages with each admitted class, but I suspect there is a reason for the separation between what a university wants admits to see and events for people on campus. If students decide against having Facebook accounts, it is much more difficult to partake in student life; auditions will be missed, clubs will go unjoined. But as far as social media platforms go, WesAdmits and other similar college pages seem to be a return to the days when the internet wasn’t a place one could go to hide behind their screen: it was somewhere one could go to find social interaction in the non-digital world, a place one could find finals commiserators and fellow sledders.

As I am beginning to think about how the emergence of digital media has impacted the university experience in liberal arts colleges, I sent out my own post into WesAdmits looking for people who would be willing to chat informally. Ironically, I have received no responses, but I am still holding out hope.