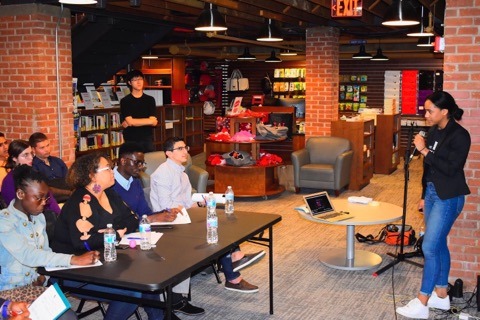 People tend to make assumptions about inner-city communities like the Bronx. The general understanding of neighborhoods like these, at least in the media, is that they are places of great suffering and little joy.

Bronx native Shantel Sosa ’21 is all too familiar with these misrepresentations.

“My parents are Dominican and I’m first-generation American,” Sosa said. “And 95 percent of people in the Bronx identify as black or Latinx. One of the biggest problems that I found is that a lot of those narratives get pushed onto neighborhoods in which people of color live.”

Sosa’s response to these false stereotypes began to form during her senior year of high school, when she had the chance to spend a month working on a project of her choice, advised by her history teacher at Ethical Culture Fieldston School, Miriam Paterson. Her medium was the art form that had fascinated her since childhood: photography.

In its current form, Sosa’s project features portrait-style photographs of ten different Bronx natives alongside short write-ups of their life stories, told in their own words. All of Sosa’s photographs and interviews are available on a website of her own design, nuestragentebx.com, and many are also featured on the corresponding Instagram, @nuestragentebx.

Sosa is interested in capturing the everyday lives of passionate and inspiring young people who live and work in the Bronx, subverting false narratives by replacing them with authentic ones. She’s met most of her subjects at community events, like book fairs or poetry slams.

“I would meet them at these events, and then we’d do a one-on-one interview to craft a story about them and their life and what it is that they do,” she said. “Part of meeting them was that I’d follow them around for a couple of hours. We’d just walk around their neighborhood.”

According to Sosa, the most impactful people she photographed were Danyeli Rodriguez Del Orbe and siblings Roselyn and Amaurys Grullon. 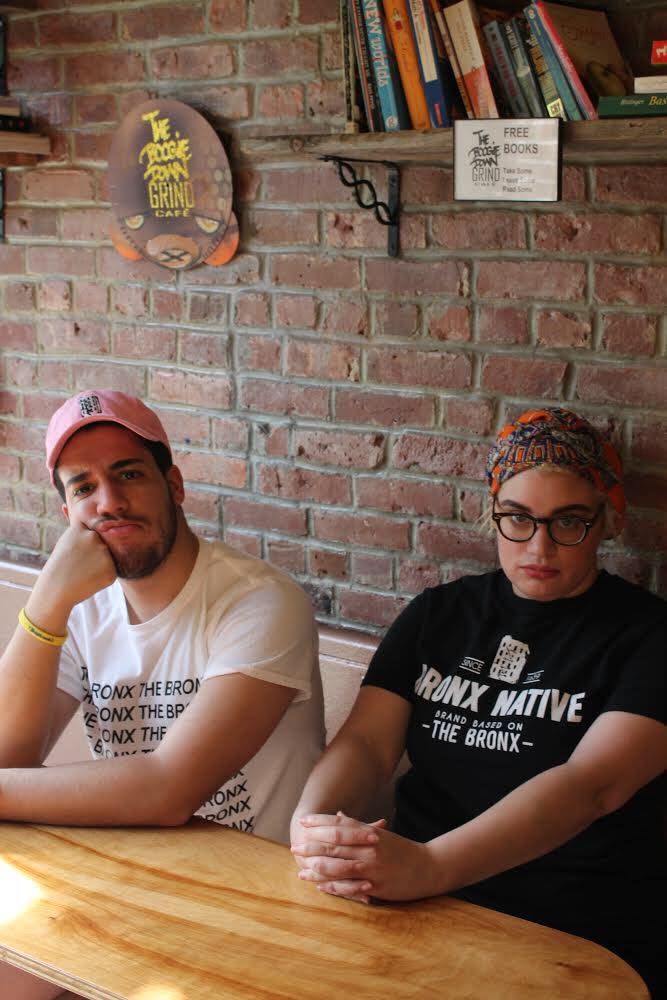 Danyeli Rodriguez Del Orbe is a DACA recipient who immigrated to the United States from the Dominican Republic at eight years old. She is a legal representative for a non-profit, an aspiring immigration lawyer, and a poet.

“Poetry feels like breathing underwater,” Del Orbe told Sosa during her interview. “It is my best form of resistance because I get to shed a light on an experience that is often forced into silence. This year, I am applying to law school to keep up the fight inside the court as well, but poetry helps me heal what the law cannot.”

Two other subjects Sosa profiled, Roselyn and Amaurys Grullon, are the founders of a clothing and design company called Bronx Native. Their goal is to circulate more authentic images about the people who live in the Bronx, images that also resonate with the members of the community themselves. Their products include a phone case with an image of a Metrocard that reads “The Bronx” and a beanie sporting Cardi B’s signature phrase, “Okurrr”, among others. Since it was founded as an online venture in 2015, their company has taken off, and the Grullon siblings are in the process of opening up a second location.

Sosa presented her first ten photographs and interviews last year as part of her high school project, but she said that the initiative is far from complete. Encouraged by Anthony Price ’20, founder of Be the Change Venture 509(a)(2), Sosa entered the organization’s second annual Pitch Competition in hopes of securing funding to continue her project in the Bronx.

As part of the competition, Sosa was tasked with taking all of her stories and accomplishments and wrapping them up into a three-minute presentation, which she gave last Thursday, April 25, in front of a panel of professionals at R.J. Julia Bookstore. The judges were impressed; of the nine students that competed, Sosa walked away with the $500 grant, along with some helpful advice on how to expand her project.

Sosa plans to use the money to invest in updated camera and lighting equipment, as well as practical expenses such as a metro card for travel in the city. This summer, she hopes to produce ten more photographs and stories to add to her website and social media accounts. 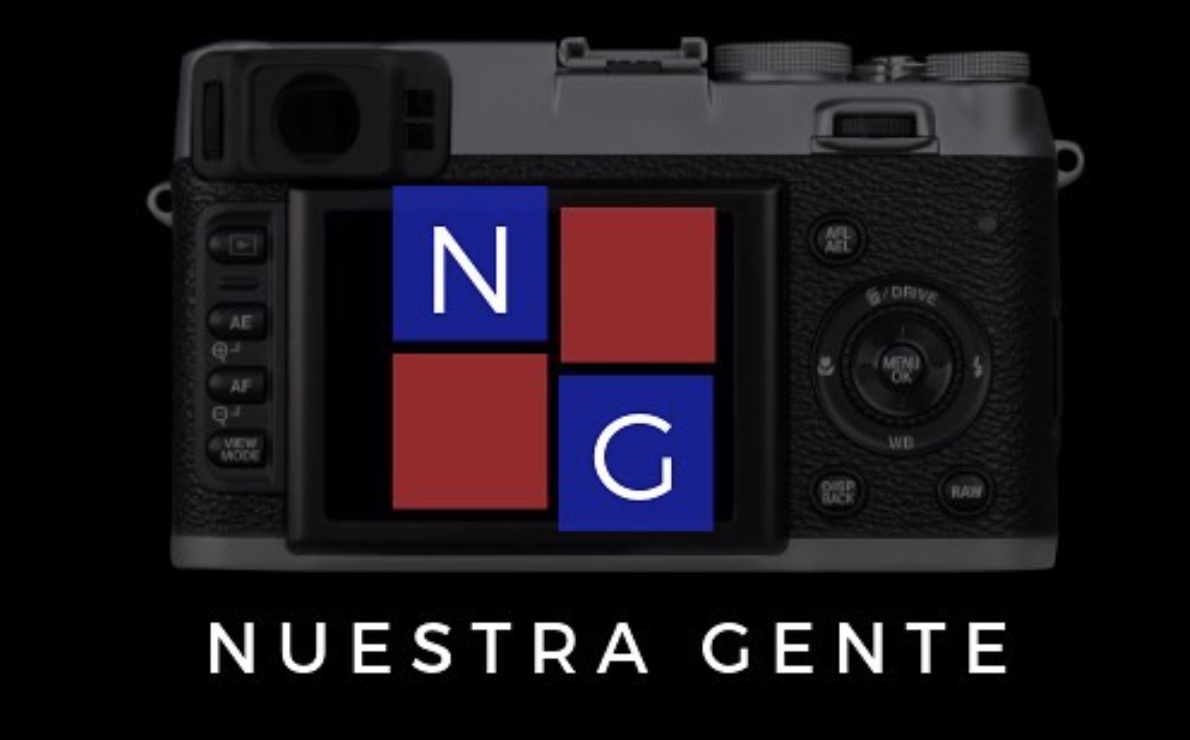 Sosa’s content and style of her website are influenced by one of her early mentors, Noel Quiñones, a spoken-word poet who had recently graduated from Fieldston when Sosa was a senior. Many of Quiñones’ poems discuss his Puerto-Rican American identity and life in the Bronx.

“He was the first person I reached out to, other than my high school photo teacher [Mark Stracke], to figure out how to collaborate in a way that I could present who these individuals are,” Sosa said.

As far as Sosa’s art, she said that photography has always been her favorite way to document her experiences.

“In 2010 for Christmas I got a point-and-shoot camera,” she said. “That was like the coolest thing ever for me. Every day on my way home from school, I took pictures of random things. I really like the idea of just journaling my life.”

When Sosa photographed the Grullon siblings for her project, she had the unique opportunity to work alongside their team of professional photographers, who take pictures for their company’s website. Later, Sosa was able to intern with one of them, Jeremy Rios.

“[Jeremy] helped me learn how to capture light and how to organize an image to capture a specific emotion before I even came to Wes and took a Digital Photo class,” Sosa said.

Sosa hopes that Quiñones and Rios, as well as her current photography instructor Associate Professor of Art Sasha Rudensky, will continue to serve as mentors as her project grows and expands. Regardless of where her project takes her, Sosa is focused most of all on overturning biased narratives, both in the neighborhood she grew up in and beyond.

“I know this [project] isn’t at all addressing the big institutional powers that make a lot of these narratives be further accepted, but it is definitely a step of challenging the social aspect,” Sosa said. “If more of the stories get out there, then that’s definitely gonna start to change the narrative, and impact young people like myself.”

Sosa is particularly excited about the grand opening of the Bronx’s first independent bookstore, the Lit. Bar. Sosa reposted the article to her Instagram immediately.

“We need to be penetrating pop culture and media with these stories,” she said. “We can’t just focus on the struggles. There are so many people who are doing uplifting things for the community, and giving back.”

Correction: A previous version of this article had the name of Anthony Price’s company as “Be the Change Nonprofit.” It is Be the Change Venture 509(a)(2).