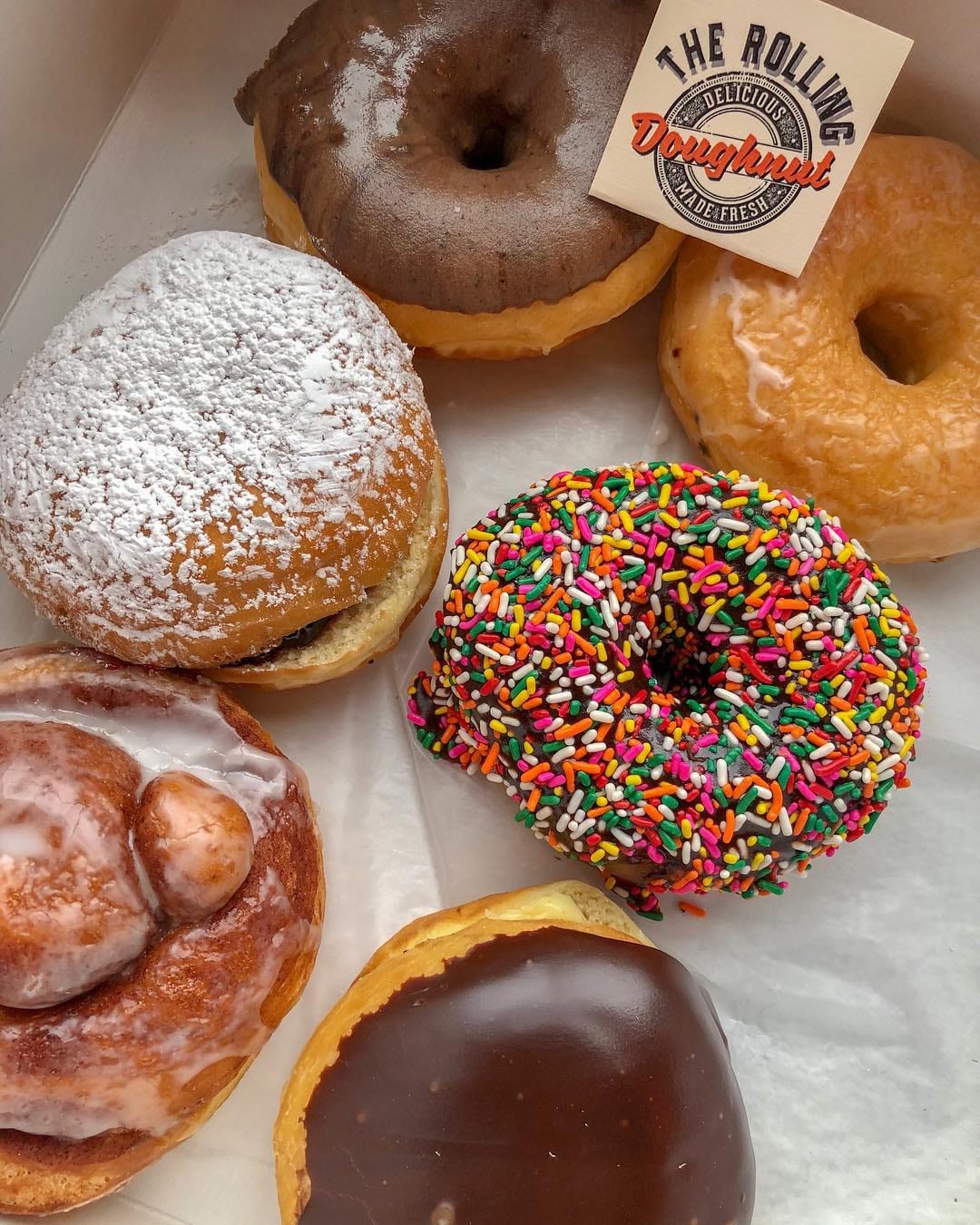 Everyone knows the biggest problem with Main St. is its lack of dessert options, and more specifically the lack of artisanal doughnutteries. Dunkin’ Donuts just doesn’t cut it when looking for an authentic doughnut experience. Sure, if you have eight dollars on you and a severe sugar craving, there’s always the possibility of rolled ice cream or Dari Serv. But ice cream can never satisfy the desire for a doughnut. Plus, it’s winter! Well, you can breathe a sigh of relief, for we are all in luck—finally, an artisanal doughnut option, The Rolling Donut, has arrived in Middletown.

“DEATH BEFORE DECAF,” a sign in the corner of Perkatory Roasters,  reads. This is where the Rolling Doughnut—a seasonal food truck—has found its home for the winter. Perkatory has an altogether unique aesthetic: Vans posters and skateboards are hung up on the walls, and skeletons wearing wigs litter the furniture, staged as if they are drinking coffee. One skeleton is seated at the counter, wearing Perkatory merchandise, next to an employee on his break wearing the same shirt. Their logo depicts a skeleton in a mystical-looking hood, holding a hot coffee and throwing up the shaka sign. This forced marriage of goth and skater culture works surprisingly well, thanks to the natural light streaming through the windows and the friendly demeanor of the tattooed employees.

The Rolling Doughnut truck is an itinerant beast that has chosen to settle in Middletown this season. Scott Gordon is its sole creator. 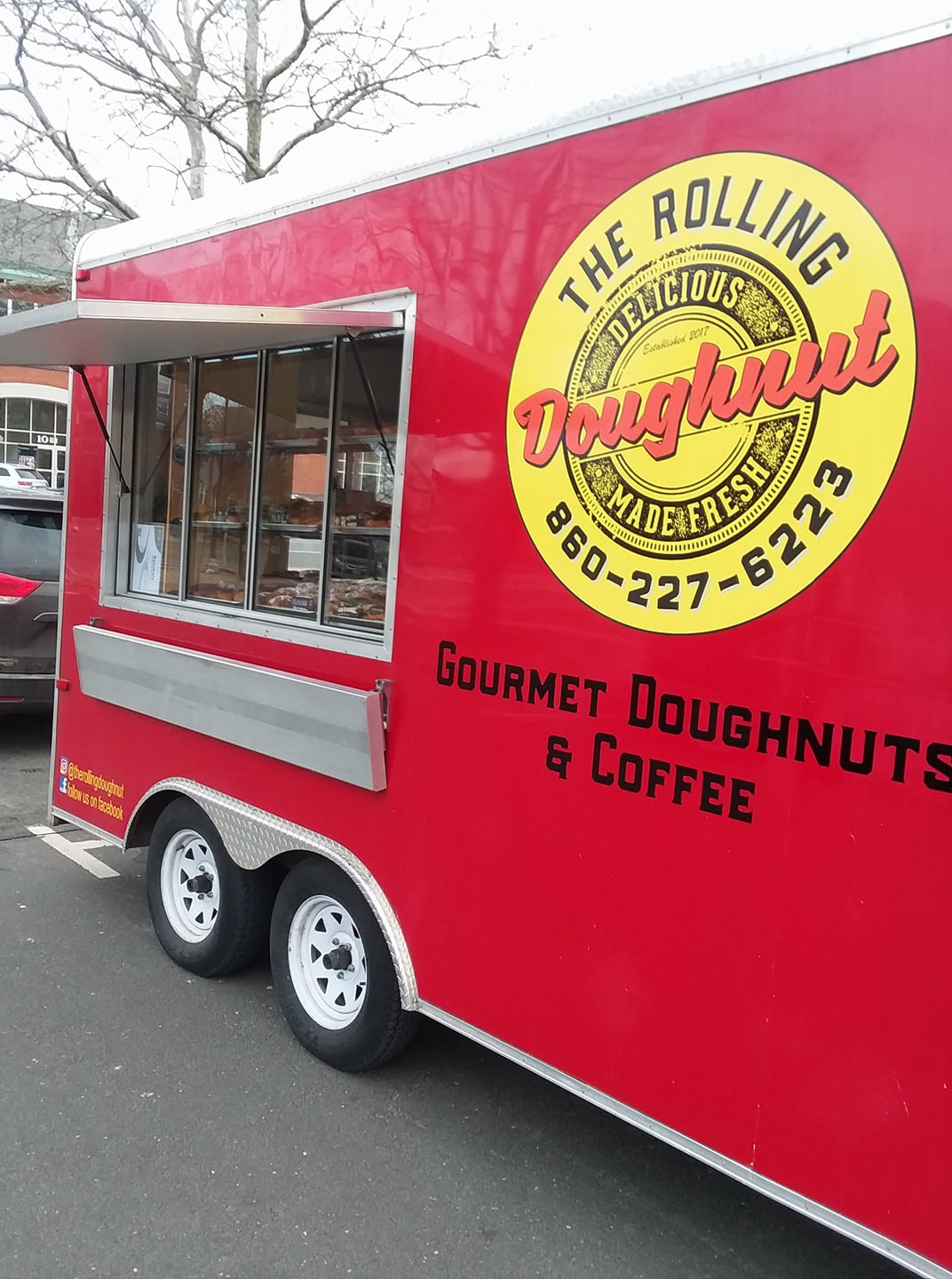 Gordon’s idea for the Rolling Doughnut truck came in the middle of a sleepless night. His wife recently had given birth to twin girls, and Gordon was taking some time off from his work at a gourmet market to help with childcare when he received word that the market had closed in his absence. He had also serendipitously just purchased a concession trailer, with plans of selling some non-doughnut goods. He recalled one successful day at the market when he had made doughnuts on a whim, and suddenly, the truck was destined for greater things.

It didn’t take long for Gordon to take the Rolling Doughnut out to the streets of Middletown.

“The first day I went out…I didn’t announce anything and I wasn’t advertising it,” he humbly told The Argus. “I just had a few sales, like 5 or 6 dozen, something like that. And then the next day, I went to park on Old Church Street again, but there was a funeral that day…. So I moved over to Broad Street, by the library, and there was a LOT of foot traffic and people were like, this is incredible, where did you come from? And I was like, this is just day two!”

Gordon hasn’t always specialized in baked confections. In fact, he spent his first 12 years in the food business working in an Italian restaurant, later owning a BBQ joint for five years. He insists that the transition from savory to sweet was not difficult.

“I’ve actually always made desserts,” he explained. “A lot of chefs are either like, I do savory, I don’t do desserts, or vice versa; I’ve always liked a little of both. I kind of attribute that to my mom, she’s a really, really good cook and an awesome baker. I take after her, I guess.”

He often draws from his knowledge of different cuisines when deriving inspiration for his specialty flavored doughnuts. These more complex creations sell for $3 instead of $2, and are well worth the extra dollar. Some past examples of these doughnuts include gingerbread-frosted cinnamon rolls, strawberry-frosted key lime pie doughnuts, and apple cinnamon pie doughnuts. So far, he has featured 87 different flavors.

“I also take inspiration from other doughnut places—there’s a huge community,” Gordon said. “We’re always sending each other messages like, hey, can I steal that? Of course, go ahead, this is what I did.”

What makes the Rolling Doughnut notable is the dough itself, which made from a brioche recipe that Gordon has spent months perfecting. Every doughnut is made with the same dough, which gives Gordon more freedom to experiment with toppings. Boston Cream and Chocolate Sprinkles are currently his most popular flavors; he prides himself on offering the public classic doughnuts, done really well. Boston Cream also happens to be Gordon’s favorite flavor.

“When I go to a doughnut place, what I judge them by is their Boston Cream doughnut,” explained Gordon. “With ours, I make the brioche, I make the pastry cream, I make the chocolate topping—a lot of places, everything is just out of a bucket. And I can tell from the first bite, sometimes just from looking at them, when that’s the case.”

You only need to lift Gordon’s Boston Cream doughnut off the plate to know that these doughnuts are not made from the “bucket.” Each doughnut has a true heft to it, a weight that Dunkin’ could never mimic. Biting in invites wonder—the cream is so rich and the chocolate icing so velvety that the whole bite melts once it touches the tongue.

But to complement all this sweetness, a touch of bad news: Gordon’s doughnuts are only sold at Perkatory on Saturdays and Sundays. To make matters worse, the doughnuts go on sale at 9 a.m. and they’ve been selling out by 11:30 a.m. on most weekends. As discouraging as this is for hungover college students, there is hope yet that all University students might someday sample Gordon’s confections. When asked if he would ever consider bringing the Rolling Doughnut truck to the University’s campus, a la the business model of Whey Station or the Falafel truck, Gordon entertained the idea.

“I could definitely do that,” he responded. “I’ve been wanting to get up there.”

Here’s hoping he rolls by soon.